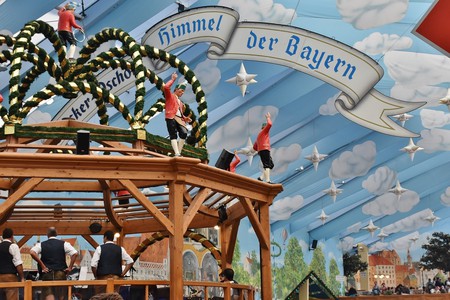 Millions are about to dress in dirndl or lederhosen and throw themselves into the festivities at Munich‘s Oktoberfest. The world’s largest beer festival kicks off on September 16, and through to October 3 people from all over the world indulge in hearty Bavarian food and litres of wheat beer. Whether you’re after the best pork knuckles or the best tent to spot celebrities, we’ve got you covered. Here’s a comprehensive guide to all venues.

Since the Marstall opened its doors for the first time in 2014, the tent has welcomed those who prefer classy celebrations. The activities are more civilised – dancing on benches is unacceptable until late – and guests here appreciate the sophisticated atmosphere. Chef Hubert Kayr spoils the guests with excellent traditional and novel dishes, including some vegetarian, vegan and gluten-free options, which is relatively rare for the festival. Still, tradition plays a vital role, so whether you order Franziskaner beer or Champagne, it’s served in steins.

Armbrustschützen-Festhalle: The tent for sports spectators

The Armbrustschützen-Festhalle is synonymous with tradition and jamboree. It used to be popular among mainly older locals but has made a name for itself as being quite the party tent. During the day, the atmosphere is still chilled and mannered. Fast forward a few hours and hundreds of litres of Paulaner beer, the tent gets busier, and the guests more cheerful. The band belts out the greatest Oktoberfest hits and fires up the crowd. If you’re a fan of sports events, you might enjoy stopping by for the annual German crossbow championships.

With 10,000 seats, the Hofbräu tent is the largest of the festival and usually the first stop for tourists. Bibulous Ozzies, Americans and Brits prevail in numbers, but you’ll meet people from all over the world. The cheerful crowd drinks, sings and dances to original Bavarian hits in the midst of blue and white garlands dangling from the walls and ceiling.

The Hacker beer tent was designed by Oscar-winner Rolf Zehetbauer and has been dubbed ‘Himmel der Bayern’. The nickname translates to ‘the heaven of Bavarians’, which is reflected in the audience. It’s a favourite among original inhabitants of Munich who mingle with international tourists wanting to immerse in the authentic Oktoberfest experience. The walls are covered in murals showing historical motifs and typical Bavarian landscapes, and part of the roof folds back transforming the tent into an open-air venue. If you want to celebrate like a local and practise your German, make a stop here. 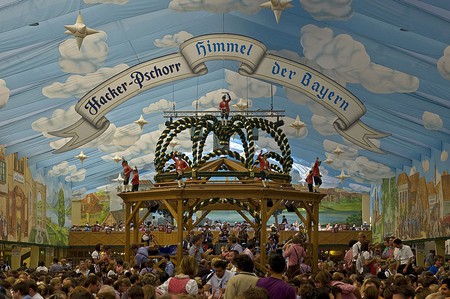 Schottenhamel: The beer tent for the loud and rowdy

It’s impossible to imagine Oktoberfest without the Schottenhamel beer tent. Every year at 12 pm sharp on the first day of Oktoberfest, the crowd exclaims ‘O’zapft is!’ when Munich’s mayor opens the festival by tapping a keg and pouring the year’s first beer. 2017 marks its 150th anniversary, making it the festival’s oldest beer tent. Despite its long standing tradition, on the weekends the 10,000 seats of the Schottenhamel are filled by young and flirtatious high school graduates and students. If you’re looking for boisterous and unforgetful parties you’re in right place. If you’d rather avoid adolescent advances and brawls but still like a good party, you’re better off at the Löwenbräu, Armbrustschützen, or Hofbräu tents.

If you’re headed to the Winzerer Fähndl, look out for the huge Paulaner beer stein statue that pinwheels outside. Despite its size, the Winzerer Fähndl is known as being the cosiest of the beer tents. It’s also where locals rub shoulders with celebrities, and people from all generations join in in the full-throated singing. If the weather plays along, the south-facing beer garden is great to soak up some autumn sun.

The Schützenzelt combines the best of both worlds. There’s a festive yet well-behaved atmosphere. If you want to take it down a notch and recover before you dive into the next wild party night, this beer tent offers some refuge and hearty food. It’s popular with locals, and during the day, families with kids and grandparents come here for lunch. Their speciality: suckling pig with a malt beer sauce. If you plan on spending the evening here, it’s still wise to queue up early, as the beer tent has gained popularity in recent years. 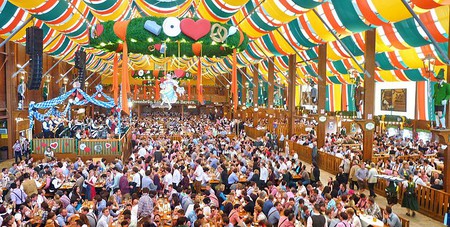 The truth is, it’s difficult to get into the Käfer’s Wiesn-Schänke beer tent unless you rank as a celebrity or befriend one outside. Chances are better for the outside beer garden, which has an additional 1,900 seats. If you snatch a spot, you can indulge in gourmet foods and sway to the music with Munich’s in-crowd. Keep your eyes peeled for some A-list stars, including Bayern Munich’s football team, Boris Becker and international celebrities. It stays open late.

Weinzelt: The beer tent for those who don’t like beer

If you somehow ended up at the world’s largest beer festival but don’t like beer, don’t worry. The Kuffler’s Weinzelt is the exception to the rule. Here, most guests swap their beers for wine, sekt and Champagne. It’s one of the smaller tents, decorated with a love for detail. Those who stick to beer are being served their brew in standard glasses, not steins. On the menu are the culinary highlights of Kuffler’s restaurants. Unlike most venues, the Weinzelt remains open until 1 am, and a lot of festival-goers join the party for a nightcap after the other tents close.

If you’re headed to Oktoberfest to dance and drink the night away, this is your spot. You can’t miss it. A 148-foot lion statue at the entrance roars ‘Löwenbräu’ across the Wiesn every few minutes. The tent is not only a favourite with tourists from all over the world but also the go-to venue for the players of Munich’s TSV 1860 football team. Ludwig Hagn has the most experience of all Oktoberfest hosts and sure knows how to put on a party.

The family-operated beer tent cultivates tradition. The name stems from the first daughter of brewery owner Pschorr whose beauty used to draw crowds to the beer tent. Today, locals, a lot of them regular visitors, come here for the sweeping atmosphere. A Yodeler and Alpine music bands invite the guests to sing along to Bavarian hits. A couple of tasty Hacker-Pschorr beers might help you overcome the language barrier and mingle with locals. On the first Sunday of the festival the gay community takes over the venue to celebrate ‘Gay Sunday’.

The Augustiner tent is a popular hub for locals, and a lot of them are regulars. They tend to agree that the staff here is friendlier and, more importantly, that the beer tastes better than elsewhere which might be because the smooth Augustiner brews here still come straight from the barrel. On both Wiesn Tuesdays, the hosts attract families with reduced prices. The atmosphere is quaint and traditional and so is the food – the Vollmer family uses local produce and meats for their dishes. 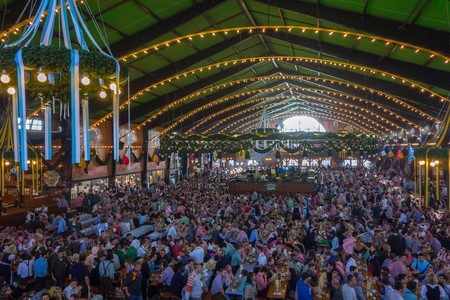 Meat is the biggest attraction here. The name translates to ‘oxen grill’, and the oversized statue of a skewered ox mounted to the tent outside prepares you for what to expect. The Ochsenbraterei has picked up a tradition from 1881 when an ox was grilled in its entirety on a specially designed rotisserie. If you’re vegetarian or vegan, there are also vegetarian and vegan options on the menu. During the week, a lot of families come here, and the atmosphere is relatively laid-back, and in recent years it has become an insider’s tip for younger people.

If you’ve gorged yourself on knuckles, sausages and roast chicken for days straight, Fischer-Vroni is a welcoming alternative. Fish on a stick, another Bavarian speciality, is the major draw to the small venue, and the cosy tent is an excellent choice if you want to get away from the general Oktoberfest hustle and bustle. The atmosphere is somewhat relaxed, and the audience is slow to catch fire, but that changes on the second Monday of the festivities when the LGBTQ community takes over the tent for the ‘Rosa Wiesn’ event.