Most Impressive Buildings in Dresden, Germany

Dresden | Yenidze © Sylvio Dittrich/dresden.de
With much of central Dresden destroyed by Allied bombs in February 1945 during the Second World War, the classic city skyline had to be rebuilt, primarily after the fall of communism in Eastern Europe from 1989. Several elements of the baroque architecture that formed Dresden’s reputation as a first-class city of art and architecture have been rebuilt, meaning its baroque beauties are once again a magnet for tourists.

The Zwinger comprises a number of buildings that together represent a Gesamptkunstwerk, roughly a ‘complete work of art’. Largely rebuilt after the war, this is an almighty baroque jewel in Dresden’s considerable architectural crown that includes the Old Masters Gallery, Porcelain Collection and the Mathematics-Physics Salon. 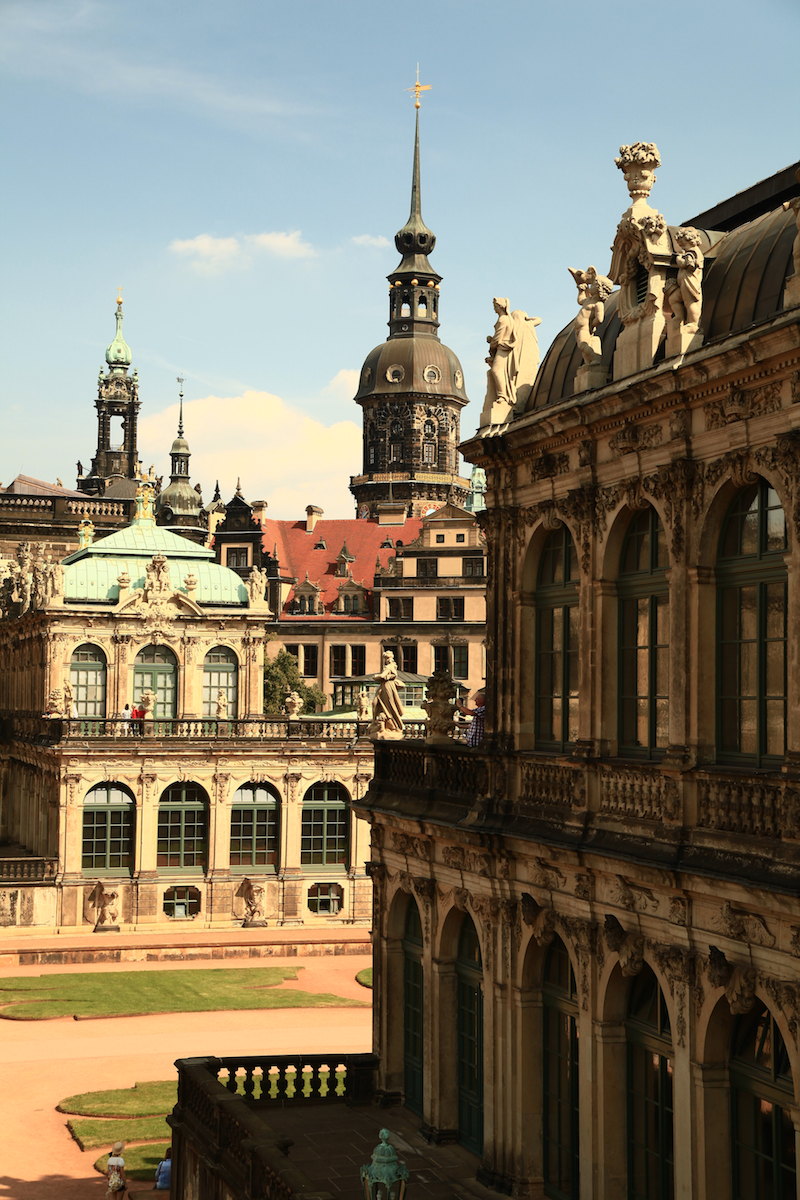 This section of the Zwinger, in the foreground, opens to the Royal Palace and Cathedral in the background | © Dresden Marketing GmbH/Marco Blüthgen

The Residenzschloss (Royal Palace), home to the Saxon royal family for centuries, was fortunate not to be pulled down after its near-destruction during the war. Its reconstruction presents a mighty impressive structure, with a style owing something to its Renaissance origins, though it received a neo-Renaissance make-over between 1899 and 1901. Towers, sloping roofs, courtyards and various museums make the Residenzschloss an attractive visit, with the treasures of the Green Vault a particular delight. Climb to the viewing platform in the 100-metre Hausmannsturm’s for a great city view. 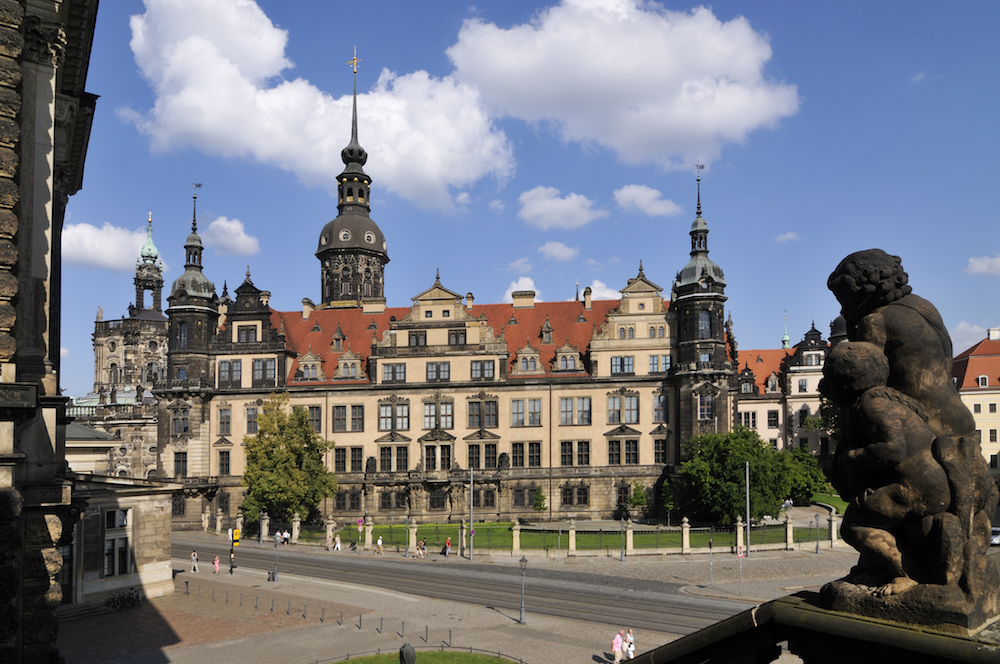 Historical Landmark
Dresden's Brühlsche Terrasse, with silhouette of the Kunstakademie, Frauenkirche and Cathedral at night | © Frank Exß/dresden.de
Nicknamed the ‘Balcony of Europe’, the Brühlsche Terrasse opened to the public in 1814. It runs parallel to the river Elbe and within touching distance of various city sights, such as the Residenz, Cathedral, Frauenkirche and Stallhof. As its moniker suggests, it’s simply the best place in the city to sit and watch the river flow by or take in the wonderful architecture on show.
More Info
Open In Google Maps
1 Georg-Treu-Platz, Altstadt Dresden, Sachsen, 1067, Germany
+49351501501
Visit website

Located at the eastern end of the Brühlsche Terrasse, the Albertinum’s cellars, first floor and Tuscan pillars date back to its original Renaissance past. Its former arsenal was converted for the hugely significant sculpture collection (classical to Renaissance to the present day) in the 1880s. Recent renovations cost millions of euros and it now also holds the Gallery of Modern Masters, with works by the likes of Caspar David Friedrich, Monet, van Gogh and contemporary greats such as Dresden-born Gerhard Richter. 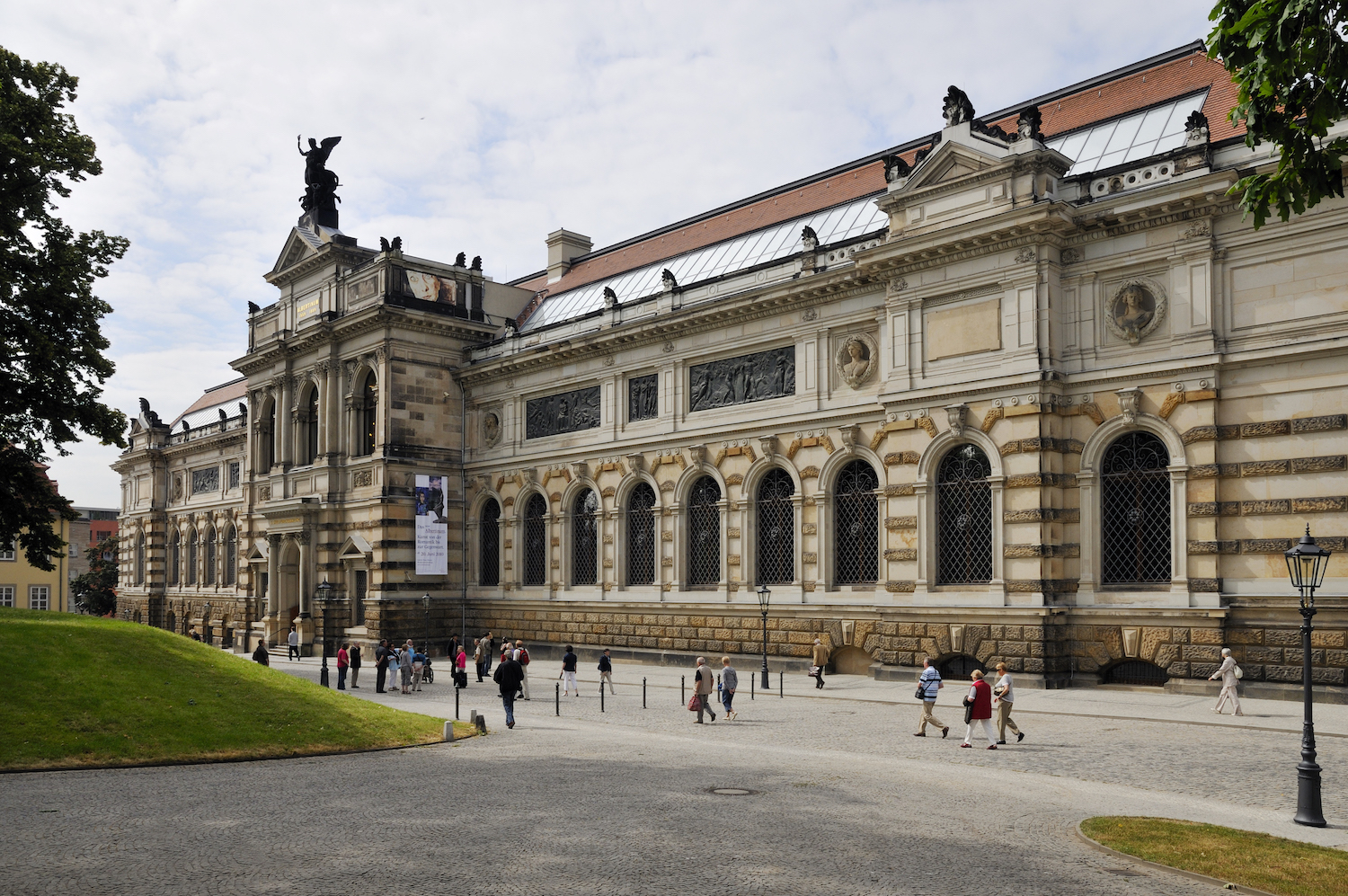 Church
Dresden's New Synagogue | © Christoph Münch/dresden.de
Located on the ever-evolving, partially reconstructed Neumarkt, which is slowly but surely regaining its pre-war look, the Frauenkirche became a symbol of Dresden’s terrible war-time destruction. Building first started in 1726, and the organ was inaugurated by a performance from Bach in 1736. After 1945, it became a half-destroyed memorial for peace, until at the end of the Cold War it was controversially rebuilt. Today’s building, completed in 2005, actually comprises 43 per cent of the original, retrieved from the rubble.
More Info
Open In Google Maps
Neumarkt, Altstadt Dresden, Sachsen, 1067, Germany
+4935165606100
Visit website

Cathedral
Dresden Stadtfest 2010
Dresden’s Hofkirche is the cathedral for Dresden and Meißen, having served the Catholic population since 1751. Even though hugely damaged in 1945, mass was celebrated in June of that year, a month after Germany’s capitulation. This imposing church is the final resting place for various kings and other members of the former Wettin royal family. Check out the restored organ – the last piece created by master craftsman Gottfried Silbermann – the historic High Altar and the 18th-century Lorenzo Mattielli sculptures and allegories.
More Info
Open In Google Maps
24 Schloßstraße, Altstadt Dresden, Sachsen, 1067, Germany
+493514844712
Visit website

Market, Bazaar
Stallhof, which is home to several city events throughout the year | © Christoph Münch/dresden.de
The Stallhof was once a showplace for jousting tournaments dating back to the 16th century, though nowadays it is home to more sedate events such as Middle Age Christmas market. The beautifully Italianate features of the Stallhof include Classical pillars and a huge 101-metre external mural sweeping Schlossplatz Square, known as the Procession of Princes.
More Info
Open In Google Maps
1 Augustusstraße, Altstadt Dresden, Sachsen, 1067, Germany
+4934217788480
Visit website

Museum
Dresden's Neustadt is home to Bundeswehr Museum of Military History, modernised by Daniel Libeskind | © Frank Exß/dresden.de
Originally built as an arsenal in the 1870s, between 1972 and 1990 the Bundeswehr Museum of Military History was used as an East Germany army museum. Its neoclassical design received a super-modern Daniel Liebeskind extension in 2011, creating a wonderfully striking dichotomy between old and new with his so-called ‘transparent arrowhead’.
More Info
Open In Google Maps
2 Olbrichtplatz, Neustadt Dresden, Sachsen, 1099, Germany
+493518232803
Visit website

Planned and built during the communist period, Dresden’s Kulturpalast was originally conceived as the House of Socialist Culture. Completed in October 1969, it was a fantastic example of a classical socialist style of architecture, with a nod to international modernism thrown in for good measure. More than 50 years later- after a peaceful democratic revolution and recent major renovation – the Kulturpalast is a listed building and home to the Dresden Philharmonic, city library and theatre.

Building, Architectural Landmark
Yenidze in the evening, presenting a wonderfully contrasting image of Dresden | © Sylvio Dittrich/dresden.de
Though neither the usual Renaissance nor baroque creation so familiar in the Dresden cityscape, the 1909-built Yenidze is a fabulous piece of modern architecture, purposely meant to mimic the façade of a mosque. It was originally designed as major cigarette manufacturing factory, with Moorish and art nouveau design elements. Now an office complex, the restaurant is worth visiting just to get inside this stunningly alternative feature of Dresden’s architectural heritage.
More Info
Open In Google Maps
3 Weißeritzstraße, Altstadt Dresden, Sachsen, 1067, Germany
Visit website