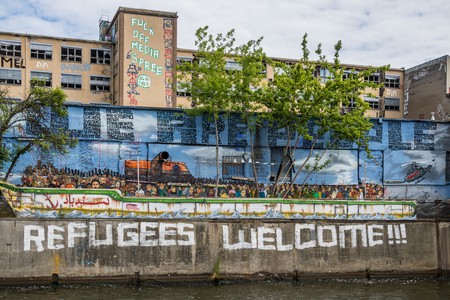 Jailed for his activism in Syria, rapper, economist and political activist Mohammed Abu Hajar, is considered a fugitive and political musician in his homeland. After fleeing to Europe and eventually settling in Berlin, Mohammed and his band, Mazzaj Rap, are continuing to make music and build networks of activism, fighting for justice in Syria. They’ve found freedom of expression here, but they’ve also faced a new set of challenges, and, at times, struggled to find their place in Berlin. Despite his hardships, Mohammed Abu Hajar refuses to be silenced.

Growing up in the port town of Tartus in Syria, Mohammad Abu Hajar, also known as MC Abu Hajar, is the lead rapper and chief songwriter for Mazzaj Rap. Like so many other Syrians, Hajar was exposed to the tyrannical political environment and state atrocities of the Assad Regime at an early age. He channelled his outrage about this oppressive system into music, finding rap a helpful podium to let his voice be heard. Inspired, in part, by emerging Arab rappers in nearby countries, like Egypt and Lebanon, Abu Hajar was one of Syria’s first political rappers.

In 2007, Mazzaj Rap was formed, with local musicians Alaa Odeh and Hazem Zghaibe. Yet their politically charged rhymes faced constant censorship and in the same year, while Abu Hajar was a university student, he was arrested for making outlawed music. In particular, a song that criticised honour kills of women by men, a crime that was rarely prosecuted under the Assad Regime. Upon his release from jail, Hajar was banned from the university in Syria, forcing him to relocated to Jordan in order to continue his studies.

Two months later, Hajar was unexpectedly released. This freedom was to be short-lived, however, and he was pursued by secret service agents. Knowing he would not survive prison again, Hajar fled to Lebanon before travelling to Europe, where he settled in Rome to complete his Masters in Political Economy. 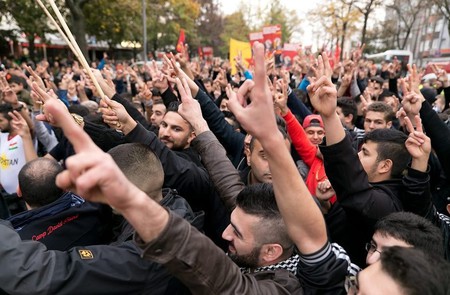 Using music as a political tool

After finishing his degree, Hajar hoped to return to Syria but, with an intensifying war in the region, this was not an option. So, Abu Hajar found his way to Berlin, where he was reunited with Ahmad Niou, with whom he shared a prison cell in Tartus. They began writing music and rhymes together and Mazzaj Rap was reignited. Shortly after, Matteo Di Santis, a friend from Rome, also relocated to Berlin and provided the group with electronic beats and samples. Together they started releasing politically charged ‘oriental rap,’ mixing rap with Sufi music, breakbeats and downtempo. The band’s style, ‘tries to break the contradictions between Eastern and Western music. It’s a road that we can all walk together’, Abu Hajar explains.

Mazzaj Rab played their first show in front of a crowded audience at Kreuzberg’s Köpi squat. The powerful show offered pointed political verses, images of people enduring detention and song lyrics in English. The band opened with a now-signature track, ‘We Fed Up’, which is ‘dedicated to all the political detainees and their mothers’. Since this blaring, inspiring night, Mazzaj Rab have become regulars in the Berlin music scene, and Hajar also recited ‘We Fed Up’ at an anti-Trump rally in the city, stirring the crowd with the lyrics, ‘You want freedom. Yes, and we want all the detainees!’

The struggles many refugees still face

‘Refugees welcome’ became a statement synonymous to Berlin in 2015. As Germany opened its arms to millions of displaced people, the capital made this message its mantra. It is Berlin’s reputation for openness and diversity that has long attracted Syrian political refugees, like Hajar, to the city. However, despite this, Abu Hajar points out there is deep frustration that comes with living as a refugee. ‘I always refused the Western use of the term ‘refugees’. It comes with a lot of pity and pity is not what I am looking for. I was more looking for solidarity. So, in this song, I tried to connect the tracks somehow between my status now as a refugee and my previous life as a Syrian activist for freedom’.

Hajar says he has still seen and experienced much racism and this subject is a major theme of the new album he is recording. It offers a new and necessary rhetoric about life as a refugee. One that is often lost amid media reports of faceless hoards breaking down European borders, and that fiercely fights against the rise of right-wing politics in Europe. Through his music, Mohammed Abu Hajar’s voice remains a necessary opposition and source of hope in the long fight for dignity.