Meet Krampus, the Christmas Demon with Horns and Chains

Christmas is creeping up on us once more, dear readers. ‘Christmas’ is a word that inevitably elicits visions of sugarplums and jovial old elves with a strange penchant for delivering goodies to children. Despite this sweet image people have of the seasonal customs, there is a macabre side to the joyous holiday celebration. 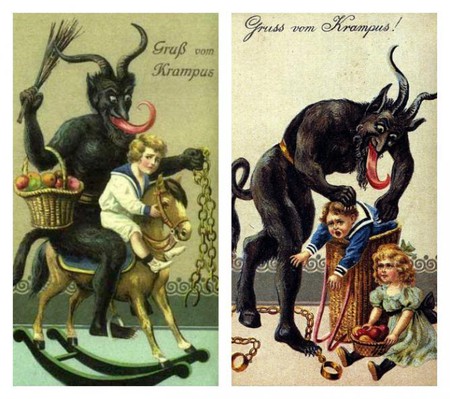 One of the most popular Yuletide tales concerns a miser haunted by eerie ghosts. Everyone is familiar with Santa Claus, the saintly figure who represents the lighter side of the holiday. However, you may not be so acquainted with his devilish companion, Krampus.

The legend of Krampus derives from a centuries-old Christmas tradition in Germany, where yuletide celebrations begin in early December. Krampus was created as a sinister counterpart to the kindly St. Nicholas, who rewarded children with sweets and toys.

Bearing horns, vampire-like fangs, and an all-around grotesque appearance, the so-called ‘Christmas Devil’ travels the land with Santa and, according to lore, punishes naughty children while Santa rewards the good. Krampus is traditionally armed with chains and a bundle of birch branches to swat the bottoms of children on the ‘bad list’. In the case of particularly nasty children, Krampus hauls them straight to his lair in hell. Charming, eh?

The fiendish holiday icon supposedly appears on the eve of Dec. 6, known as Krampusnacht or Krampus Night. The following morning children check shoes they left out to see if they have received presents or a rod for their parents to discipline them with.

A popular modern take on the tradition is known as Krampuslauf. This practice involves intoxicated revelers who dress as devils and participate in a ‘Krampus Fun-Run’, so to speak. Unassuming people are chased by these ‘devils’ during these events. This tradition is primarily observed in Austria, Germany, Hungary, Slovenia and the Czech Republic. 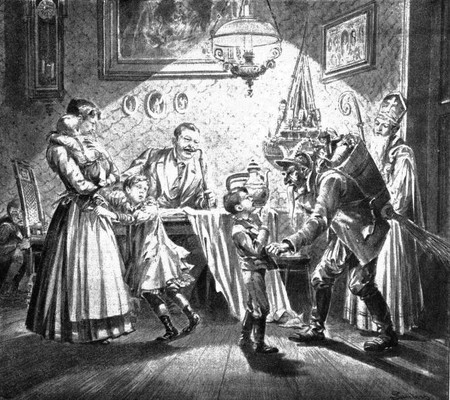 For years, Krampus was suppressed by the Catholic Church, which forbade any Krampus-related celebrations. During World War II, European fascists found Krampus appalling because he was considered a creation of the Social Democrats. Poor Krampus has also been under attack by those who don’t find a wrathful demon appropriate for children.

As of late, Krampus has had a cultural resurgence. The Christmas Boogeyman has become an anti-Santa of sorts for those who embrace the more ghastly things in life. Stockings, ornaments and toys have been made in his gloriously gargoyle-like image. Krampus-themed events have been held in many locations in recent years. It appears that a certain elf with a weight problem may have some competition.

Alex Poteet is a horror connoisseur, monster kid, and Theater Phantom. Currently haunting a local video store. He has never met a monster he didn’t like.