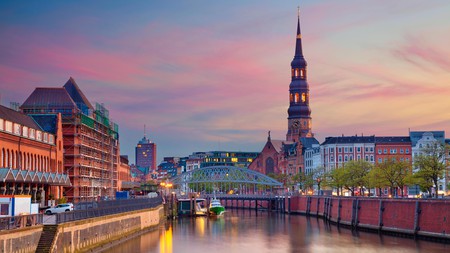 Treat yourself with a stay in one of these luxury hotels in Hamburg, Germany.

Nicknamed “Tor zur Welt” or “gateway to the world”, the port city of Hamburg offers a variety of options for travellers who enjoy a touch of opulence. From stately suites fit for a royal to trendy accommodation with cosy touches, these are the best luxury hotels in Hamburg. 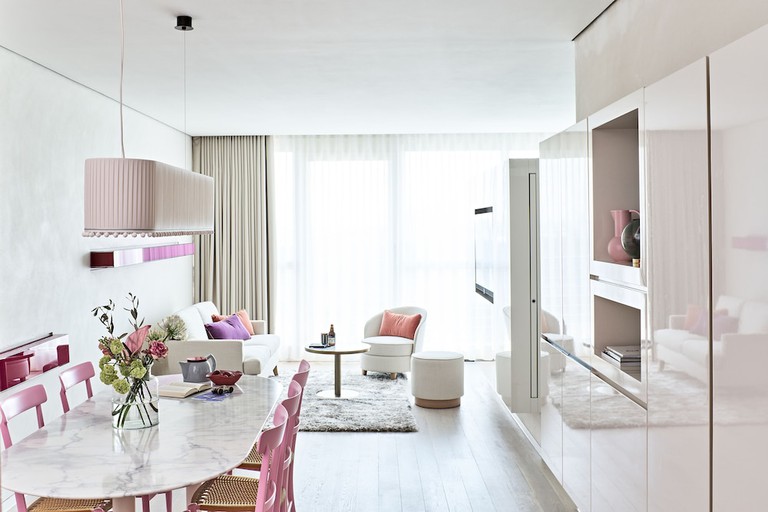 Courtesy of SIDE Hotel / Expedia
View Rooms
Located just steps from the Hamburg State Opera, the centrally situated SIDE Design Hotel leans into modern, clean design, with rooms featuring muted colours and sleek lines. Steak lovers will delight in the five-star hotel’s swanky, aptly named restaurant, [m]eatery, which specialises in dry-aged steak that has been matured in-house for at least six weeks. When it’s time to decompress, head to the sauna or steam bath at SIDE’s spa.
More info 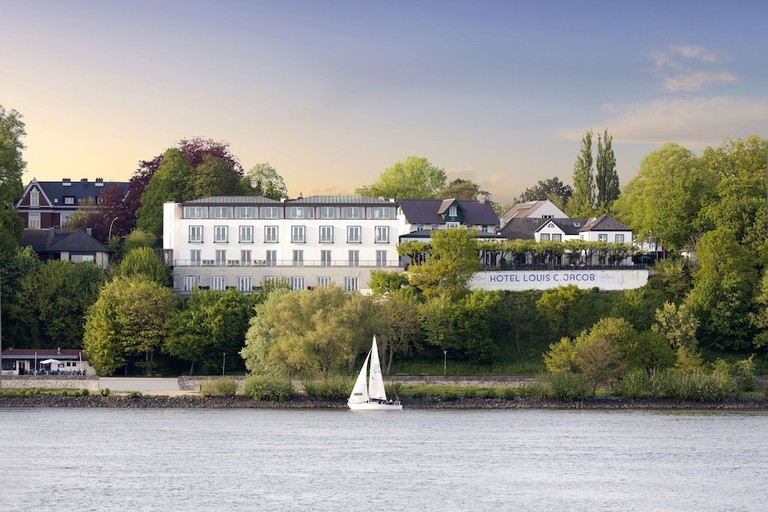 Courtesy of Hotel Louis C. Jacob / Expedia
View Rooms
The Elbe River is right outside your doorstep when you stay at the five-star Hotel Louis C Jacob – part of which housed a confectioner in the 18th century. You can watch the ships go by in a room with a river view or embrace your peaceful city sanctuary with a room facing the garden. During your visit, don’t forget to reserve a meal at the two-Michelin-starred Jacoby’s Restaurant, and enjoy a break on the attractive lime-tree terrace – a scene famously painted by Impressionist Max Liebermann.
More info 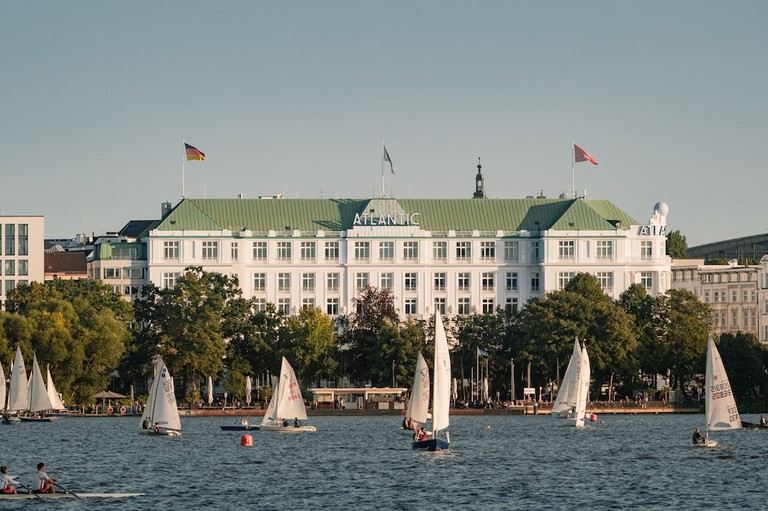 Courtesy of Hotel Atlantic Kempinski / Expedia
View Rooms
Grand is the modus operandi at the Hotel Atlantic Kempinski, which opened in 1909 and boasts 221 classy rooms and suites. From this five-star hotel, you can easily stroll along the banks of the Alster. If you are looking for some indoor recreation, you can book a screening at the hotel’s in-house private cinema. Before you leave, make time to try the hotel’s signature dish at Atlantic Restaurant: the lobster bisque, a culinary tradition dating back to 1909.
More info 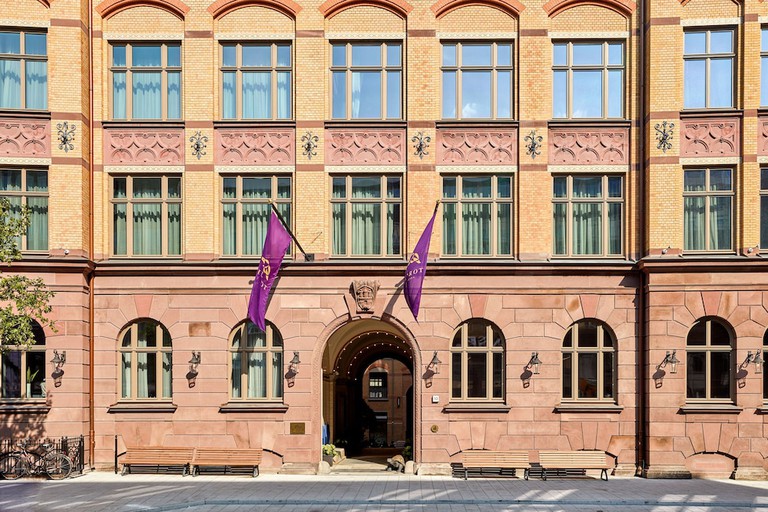 Courtesy of Tortue Hamburg / Expedia
View Rooms
Inhabiting a historic building from the 19th century, the fashionable Tortue is but a short walk to the Jungfernstieg, prime shopping streets and other must-see attractions. In the 128 lavish rooms and suites, soothing grey, blue, and white tones are balanced with bright pops of colour. Whichever high-ceilinged room you make your temporary home, you’ll get to take in the city views from your own balcony.
More info 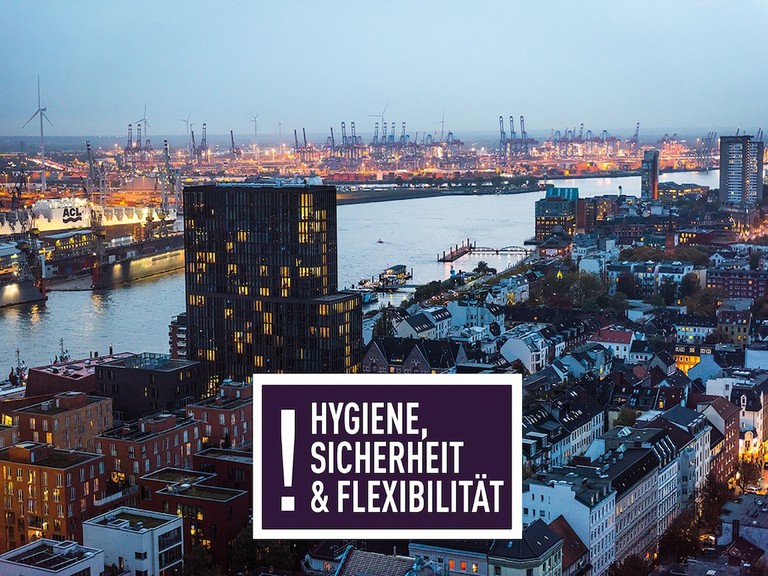 Courtesy of Empire Riverside Hotel / Expedia
View Rooms
The Empire Riverside Hotel can be found in Hamburg’s lively St Pauli neighbourhood, which is known for the flashy red-light district Reeperbahn. In the rooms themselves, an understated-yet-timeless design and floor-to-ceiling windows make the sweeping views of the harbour, city and river stand out even more dramatically. To take full advantage of the hotel’s notable height, grab a cocktail at the Skyline Bar 20up, where you can gaze out of dramatic panoramic windows from 90 metres (295ft) up.
More info 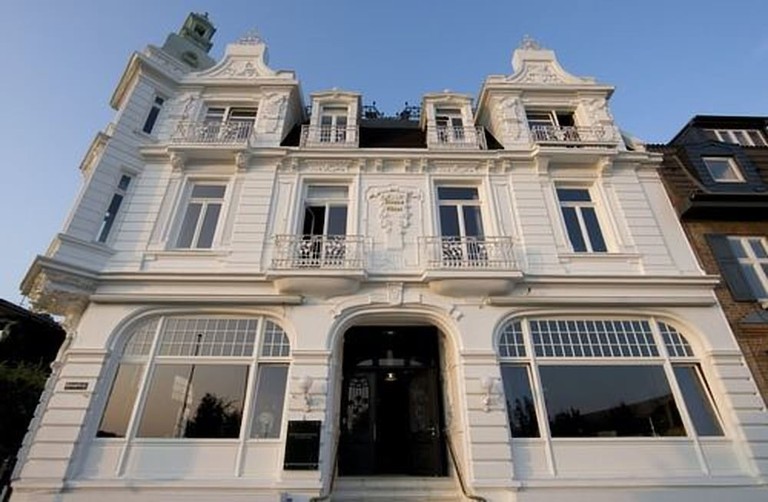 Double Room | © Expedia
View Rooms
If you prefer to be away from the hustle and bustle, head to Strandhotel Blankenese, situated on the shore of the Elbe River. Built in 1902, this Art Nouveau hotel is surrounded by the winding alleys and charming mansions of Hamburg’s hilly Treppenviertel, or “stairs quarter”. When the weather is nice, enjoy a sun-soaked breakfast out on the terrace. Within your room, you can pamper yourself with a refined selection of Bvlgari bathroom products.
More info 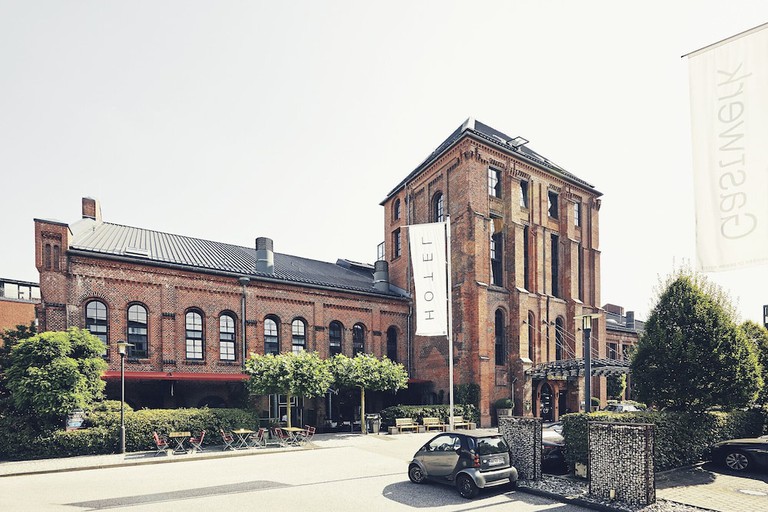 Courtesy of Gastwerk Hotel / Hotels.com
View Rooms
As hinted in its name, the Gastwerk Design Hotel is housed in an impressive former gasworks building constructed in the late 19th century. The chic hotel’s exposed brick walls, loft-style rooms, warm tones and use of mixed materials give the place a stylishly industrial vibe. While it may not be in the heart of Hamburg, the hotel has Mini car and bike rentals available to get you to wherever you want to go.
More info 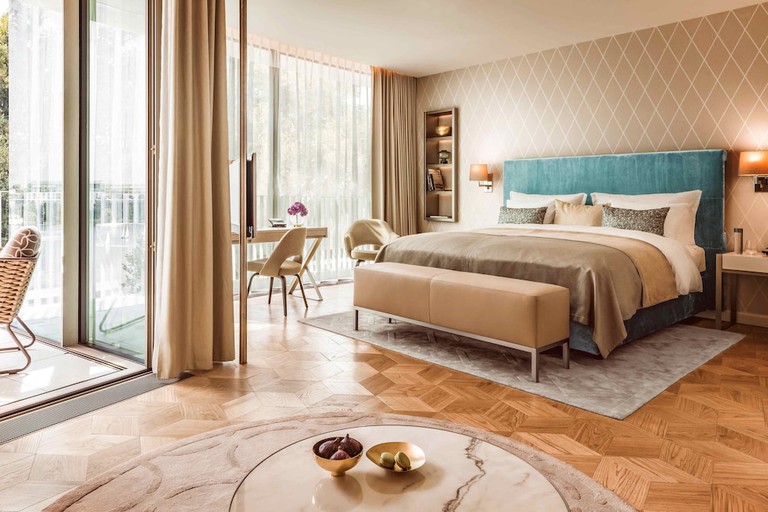 Courtesy of The Fontenay / Expedia
View Rooms
You’re in for lakeside luxury at the Fontenay. With its 27-metre-high (89ft) atrium, rooftop terrace, infinity pool and proximity to the Alster, the five-star hotel feels a bit like a nature retreat, while still being in the urban centre. The curvy, sculpture-esque shape of the building allows for all the rooms to face outward and be bathed in light. The airy rooms showcase panoramic views and a mix of bright, warm colours.
More info 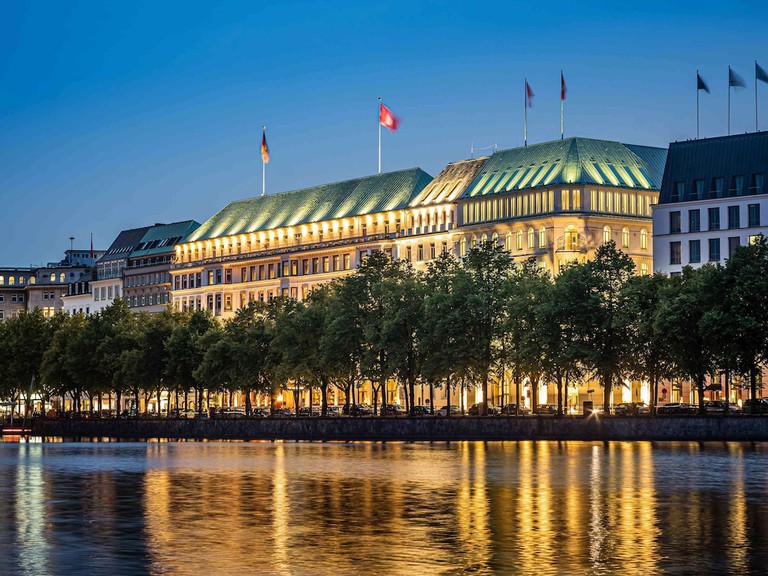 Courtesy of Fairmont Hotel / Expedia
View Rooms
Opened in 1897, the five-star Fairmont Hotel harkens back to traditional European excellence. Decorated in neutral tones, the posh rooms feature elegant touches, such as fashionable chandeliers, floor-to-ceiling curtains and tufted headboards. If you find yourself staying a bit longer, you may feel like making use of the in-house florist and hairdresser. To really lean into the dignified atmosphere, consider attending one of the hotel’s etiquette courses, which is available for all ages.
More info 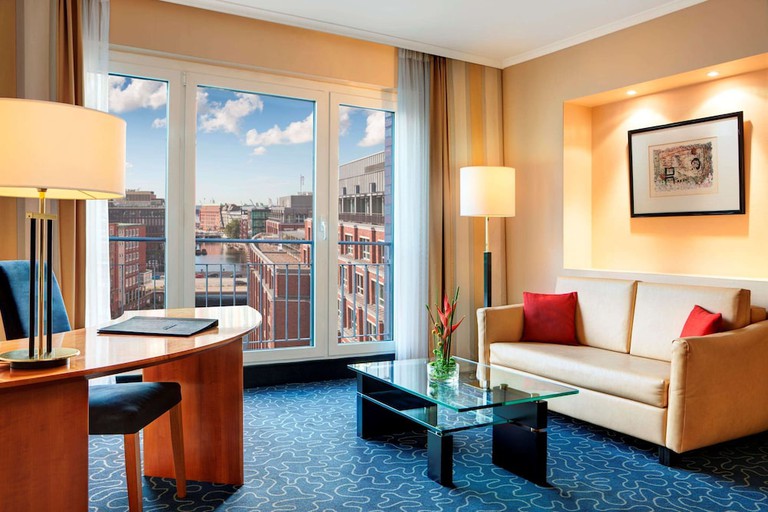 Courtesy of Steigenberger Hotel / Expedia
View Rooms
The imposing Steigenberger Hotel is perched directly on a canal within walking distance to some of Hamburg’s most frequented attractions. The five-star hotel’s modestly decorated rooms, of which there are 233 in total, have either city, courtyard or water views. Inside, there is an intimate piano bar that makes for a sophisticated space to enjoy a drink. For a proper sit-down meal, there’s Bistro am Fleet, which serves international dishes, such as gazpacho and boeuf bourguignon.
More info 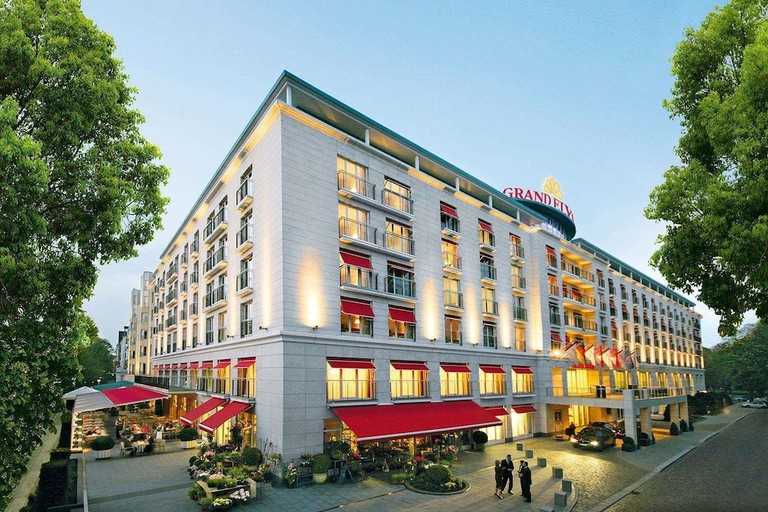 Courtesy of Grand Elysée / Expedia
View Rooms
Sandwiched between the Planten un Blomen Park and the Alster, you’ll find the Grand Elysée. The classic rooms are decorated in soft shades of beige, brown and orange. There are not one, not two but three saunas on-site (a Finnish sauna, an infrared sauna and a eucalyptus sauna). Another enticing spa feature is the Roman steam bath with its special ceiling design mimicking a starry sky. Completing the Grand Elysée are four restaurants and three bars, one being a roof terrace.
More info
Give us feedback