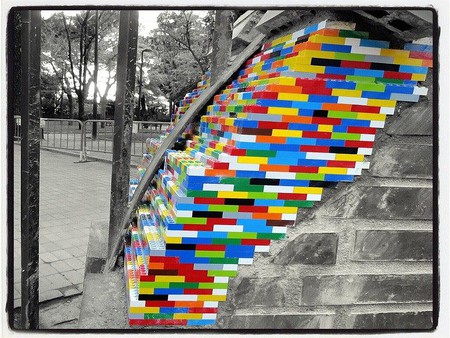 It’s not an unusual idea for young artists to want to heal the world through their art, although it is sometimes coined as a naive one. German artist Jan Vorman, explores this concept in a rather unique way. As he travels the world, as many young artists do in search of inspiration or venues, he uses lego bricks to heal crumbling architecture. The artist appropriates the childhood toy by giving it real world functionality, while also just bringing some much needed whimsy to the streets.

For the last six years Jan Vormann has been a globetrotter, although not in any way resembling someone who would use that as a hashtag followed by #blessed. He scales the sphere in order to fill in dilapidated buildings, bridges, and walls with lego pieces. Vormann isn’t harkening after some grandiose metaphor or deeply trying to obfuscate the modality of toys, he is just trying to get people to stop and think for a second. Why are these legos here? and What was here before? 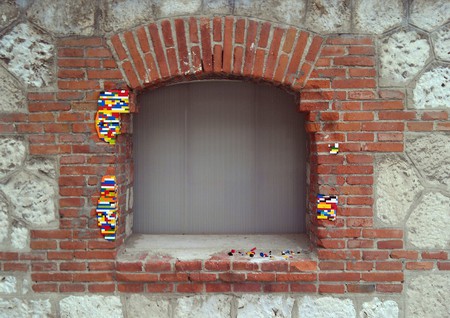 This colorful artist has been everywhere from the New York to Tel Aviv, leaving his colorful imprint trail behind him like a tangible narrative. He often chooses locations that have once been riddled with political distress, like Berlin. Where once were vestiges of bullet holes from World War II are now vivid pockets of color and plastic. When he reimagines the architectural integrity of these once burdened buildings with his creative eccentricity, he invites those who stumble upon his vibrant mosaic to reimagine the history and the future of these places. He doesn’t limit himself to historical significance but it does seem to be the vehicle he often chooses – a way of bringing lightness to tragedy. Vormann’s work begs people to ponder about what space the legos are taking up. 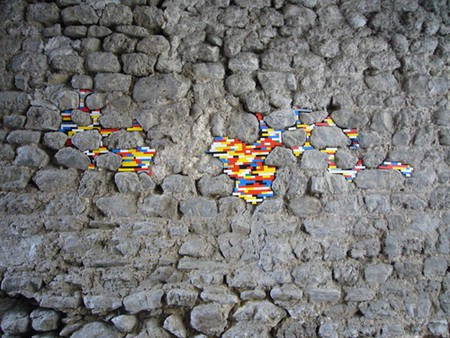 This is not the first time artists have tried to articulate an investigative need through legos. Polish artist Zbigniew Libera utilized these supple tools of functionality to construct concentration camps, in order to implore his audience to examine the very boundaries of rationality. And it certainly won’t be the last time an artist chooses legos as his paintbrush, as seen by the Bostonite, Nick Swain, who uses the city streets as his canvas. 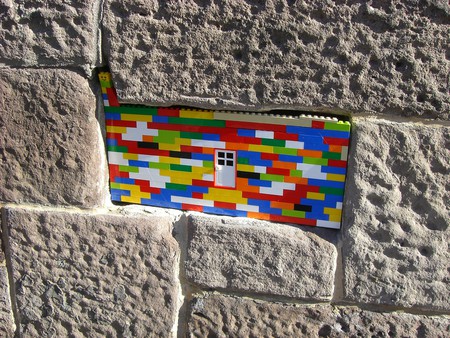 Vormann sometimes garners the help of the community to aid him in his artistic endeavors, encouraging others to get involved in his expression. They spend the day constructing and playing with legos. In this way, even his process is playfully artistic, engaging the very people he wants to stop and contemplate. It’s not to say that Jan Vormann is trying to ‘heal the world’, but he is very much making a positive and prismatic impact.