How To Spend a Winter’s Day in Munich 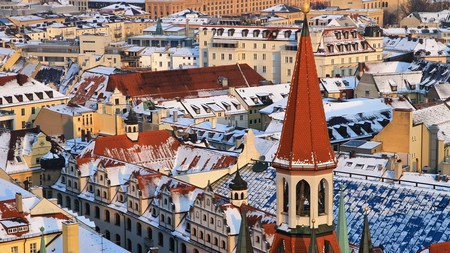 Munich is surrounded by the energy of the Alps, and most winter travellers will head directly to one of the many ski resorts that are just a few hours away. However, if you’re planning to head into the city centre, check out these fun things to do in Germany’s third-largest city during the colder months.

Some 200 years ago, Munich was a fortified city with a population of 30,000 people. Now one of the fastest growing cities in Germany with around 1.5 million people, the ‘city of monks’ has retained its charm with its centuries-old buildings and museums.

The city takes pride in its Bavarian heritage and its proximity to Europe’s majestic mountain range, a fact that you’ll notice straight off the plane at Munich airport’s Bavarian and ski-themed restaurants. In December, you’ll also find a vibrant Christmas market right outside the airport, complete with an ice-skating rink and stands selling mulled wine. Take the S-Bahn to reach the city centre in about 40 minutes, where a host of winter activities await you.

Munich can get very cold in the winter, but you’ll still find the locals eating, shopping and drinking at the city’s outdoor markets. The centrally located Viktualienmarkt farmers’ market is one of the best places to sample some of Munich’s locally made meats and cheeses. Take a stroll through the square dotted with butcher’s shops selling strings of sausages, colourful cheese stalls, flower venders and fruit stands. The market is especially famous for its exotic foods, such as wasabi cheese (green, with a kick), and pork pâté.

Birgit Stempfle, who has worked as a professional guide for Munich Tourism since 1999, recommends trying Fisch Witte, a great place for a quick lunch (though they have only a few tables), where the fish soup is her favourite; or Tölzer Kasladen for cheese. “Mrs Hoffmann is very knowledgeable and can tell you everything you want to know about cheese,” she says. This farmers’ market is open from 8am till 8pm from Monday to Saturday. 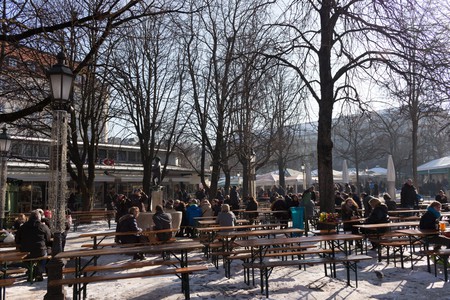 See the city from above at St Peter’s Church

For the best views in central Munich, climb up the 306-step spiral staircase at the city’s oldest church, built in the 12th century. Located a few minutes away from Marienplatz, St Peter’s church and clock tower is one of Munich’s most prominent landmarks, affectionately called ‘Old Peter’ by locals. Stempfle says, “Don’t go if you’re afraid of heights, as the wooden staircase is open and you can see from the very top to the very bottom.”

Having been rebuilt many times, the church’s interior is a mix of architectural styles, including Gothic, Baroque and Rococo. The nearby Dallmayr Delicatessen provides some fine German coffee and is a great place to get a pick-me-up after a visit to the tower. Enter through the heavy wooden doors to find floors of gourmet food and a world of cutely packaged delicacies that make perfect gifts or souvenirs. 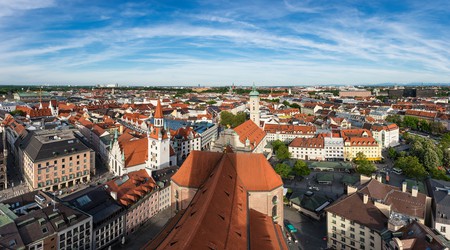 Drink a litre of beer at an old royal brewery

Munich is famous for Oktoberfest, and for its many local breweries and beer halls. If you only have time to visit one, check out Hofbrauhaus, one of the most famous beer halls in the city, founded in 1589. Once a royal Bavarian brewery, this hall has designated tables for regulars (a Bavarian tradition), as well as a safe where regular patrons can keep their personal beer mugs under lock and key. Spaces in the safe get passed on through generations, and a 12-year waiting list probably makes this one of the most coveted cupboards in the world. The mugs are regularly checked for dust, and members that haven’t used theirs in a while have their space revoked. Bavarian beer halls (as at Oktoberfest) serve beer in mugs that hold a litre of beer, so come ready to drink. Try a pint of the Hofbräu Original, a bitter beer that’s the most popular drink on their menu. 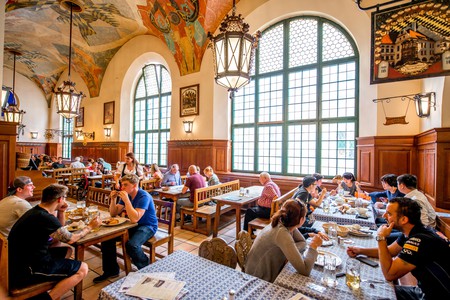 Eat a hearty Bavarian meal of sausages, sauerkraut and mash

Bavarian food is best enjoyed at a mountain lodge after a day spent hiking in the Alps, though Augustiner Stammhaus, right near Karlsplatz, can give you a similar experience in central Munich. This restaurant and historic brewery is housed in an expansive Art Nouveau building, where the cosy wooden tables are always packed with people and laden with food. Try a typically Bavarian sausage platter with the restaurant’s homemade white sausages made at their own butcher’s shop, served with mashed potatoes and sauerkraut. 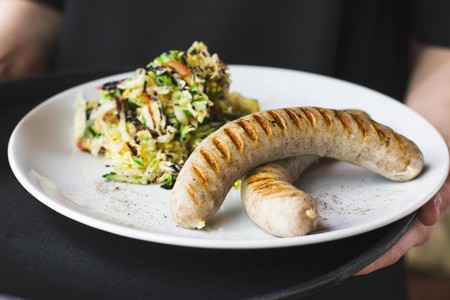 Buy a souvenir at a Christmas market

If you’re visiting in December, the city’s Christmas markets are where all the action is. Find Munich’s residents here in the days leading up to Christmas sipping Glühwein (a hot red wine muddled with spices) and eating pretzels, amidst shops selling tiny wooden Christmas tree decorations. Christkindlmarkt in Marienplatz, right in front of Munich Town Hall, is the largest of these. 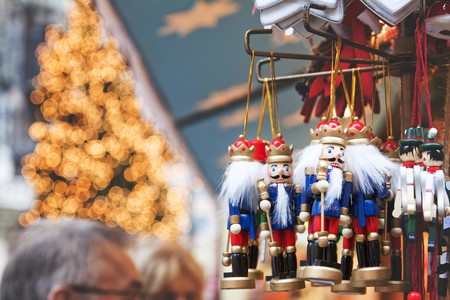 The Christkindlmarkt in Munich’s Marienplatz is the perfect place to buy souvenirs | © Daniel.Candal / Getty Images

Why we like them: Lufthansa are one of the only airlines that still provide full service onboard. The German airline’s in-flight coffee is made by Dallmyer, so if you didn’t get a chance to try one in Munich, just get one in the air.

The Hilton Munich city is one of the most central hotels in Munich, and a 15-minute walk from the city centre. We especially like the hotel bar the Juliet Rose Bar, where cocktails are grouped together on a colour-coded menu according to flavour palette: woody, floral or herbal.