How To Spend 48 Hours in Düsseldorf 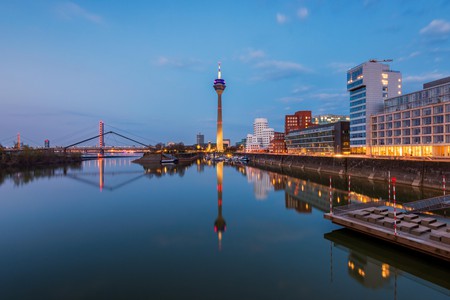 Düsseldorf has so much to see, from museums and gardens to shops and bars | © Allard Schager / Alamy Stock Photo

From world-class museums and galleries to sprawling gardens, the most glamorous shopping in Europe and the bustling Rhine promenade, there are plenty of reasons to visit Düsseldorf. Even travellers who are just in the city for the weekend or here to visit one of its many trade fairs will be able to fit in a lot of culture in only 48 hours.

Explore the old parts of town

A filling breakfast at one of the great breakfast joints in Düsseldorf is a fitting start to what is going to be a memorable day in the city. Altstadt (Old Town) and Burgplatz (a hop away from Altstadt) are the perfect places to start exploring the city. Here, visitors can admire the beautiful architecture steeped in centuries of history, including the Rathaus, Schlossturm (with a maritime museum), the historic St Lambertus Church, Kreuzherren-Klosterkirche, St Andreas Church and the famous Cartwheeler (Radschlägerbrunnen) fountain. The Kunstsammlung museum, with its unbeatable collection of modern art, is also worth visiting.

Taking a leisurely cruise on the mighty Rhine River is a great way to enjoy the skyline of Düsseldorf from a different perspective. The short panoramic boat cruises last between 45 and 60 minutes. 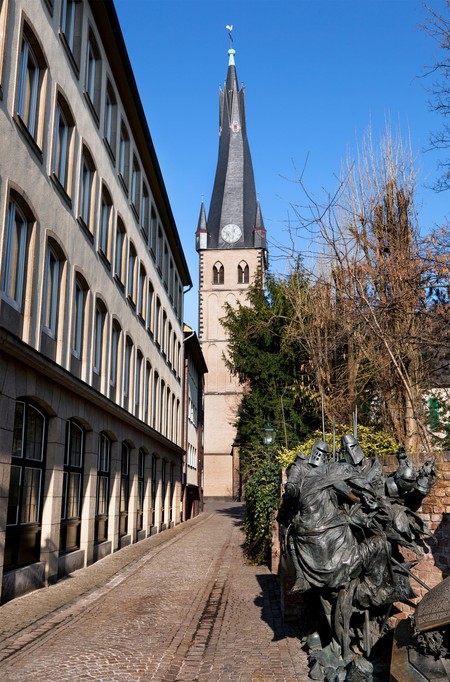 Experience Düsseldorf from above at the Rheinturm

The 240.5-metre-(789-foot-)high Rheinturm, the telecommunications tower of Düsseldorf, is not just a fine sight from the ground but also offers spectacular views across the city (and on a clear day, all the way to Cologne) from its glass-enclosed observation deck. Lunch at the revolving restaurant, Qomo, in the Rheinturm could well become one of the most memorable moments of your holiday.

Admire the architectural landmarks at MedienHafen

The MedienHafen area, with its modern and futuristic architecture, poses a sharp contrast to the historic Old Town. Architects were given free rein to transform Düsseldorf’s old harbour into the most contemporary part of the city while retaining its old-world charm. Of the rows of striking glass-and-concrete creations at MedienHafen, the most stunning is the three-building complex designed by American architect Frank O Gehry. Stop here to take a few pictures with the Gehry buildings as the backdrop. 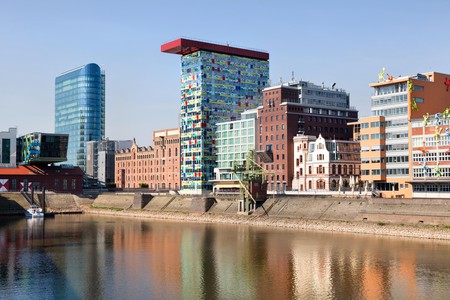 At the photogenic MedienHafen in the old harbour, modern and vintage architecture sit side by side | © Nikolay Vinokurov / Alamy Stock Photo

Recharge your batteries at Hofgarten

With its tree-lined avenues, lush meadows and blooming flowerbeds, Hofgarten – the oldest public park in Düsseldorf – is a peaceful paradise in which to slow down and recharge. Don’t miss the 17th-century Schloss Jägerhof, a museum perched in one corner of the garden that houses an admirable collection of art and artefacts about the life and works of the legendary poet Johann Wolfgang von Goethe.

As dusk descends on the city, travellers should head to Königsallee, the street that has placed Düsseldorf on the international fashion map. Shoppers will find plenty to look at (and buy) at the Königsallee, with its rows of glittering shops from high-end brands and chic boutiques that beckon visitors with irresistible displays. As a bonus, Königsallee is delightfully green – there’s a canal running through it – which makes it a great street for a stroll, and it has several good cafés. People-watching here is especially entertaining, as this is where the most fashionable people in town hang out. 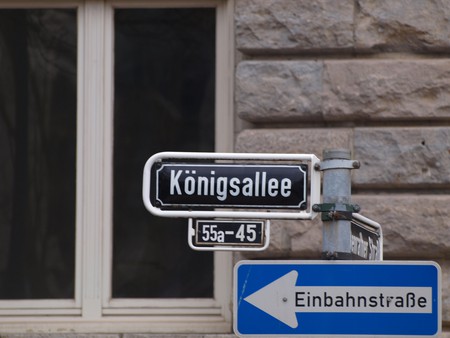 Königsallee is one of the best streets to go for a stroll, a coffee and some people-watching in Düsseldorf | © Kevin Peach / Alamy Stock Photo

When the evening comes, take a short stroll back to the Altstadt. In the late evening, the area really bursts into life, and the illuminated cityscape surrounding the Rhine transforms it into something out of a fairytale. The Altstadt has lots of restaurants, making it the perfect area for dinner. Nightbirds can take advantage of Düsseldorf’s thriving nightlife and hit up one of the many discos and nightclubs – the Salon des Amateurs should be on your list.

Breathe in the fresh air with a stroll around Nordpark

After another hearty breakfast, make your way to the Nordpark, the green lungs of Düsseldorf. In addition to beautiful pathways for walking and biking, ponds, meadows and towering trees, the park also has several themed gardens. The most popular of these is the Japanese Garden, with its traditional lighting and seating, maple and black pine trees, and quaint little ponds. Düsseldorf, the industrial past of which has attracted Japanese companies for 60 years, is home to the third-largest Japanese community in Europe (after London and Paris), which has earned it the nickname ‘The Little Tokyo on the Rhine’. 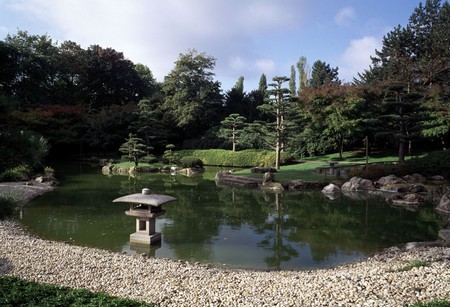 Enjoy the art at Museum Kunstpalast

Museum Kunstpalast has a rich collection of fine art from all over the world and across several different eras. The collection includes paintings, prints, sculptures, drawings and photographs, plus one of the most extensive glass collections in the whole of Europe. A couple of hours could quickly go by unnoticed while exploring the museum; remember that it is closed on Mondays. Next, it’s time to stop for lunch. The museum has a café, the Kristallbar, which sells hot and cold drinks and snacks, but there are also plenty of good places to eat around the museum.

Continue the day by heading to the EKŌ-Haus cultural centre, about four kilometres (2.5 miles) from the museum, to get a charming taste of Japanese culture. On the way, you’ll cross a Düsseldorf landmark, the Oberkasseler Bridge. With its beautiful Japanese gardens, little bridges and ponds, and the peaceful Buddhist temple, the EKŌ-Haus looks straight out of a picture book. This place is especially magical in spring when the cherry blossom trees are in bloom. Note that it’s closed on Mondays.

Go Baroque at the Benrath Palace

The Benrath Palace lies outside the heart of the city, but you shouldn’t miss this ornate – and beautifully pink – 18th-century Baroque palace. The museum, Prince-elector Karl Theodor of Bavaria’s former home, and its immaculately maintained formal gardens are worth a visit. As well as a collection of furniture and art objects from the 18th century, there is also a Natural History Museum and a Museum of Garden Art to visit here, along with a charming palace café with outdoor seating that makes a great breakfast. The museum and café are closed on Mondays, though the garden is accessible. 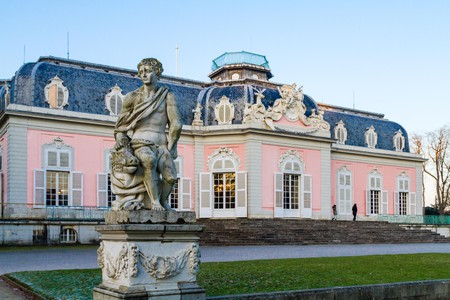 Once you’re back in the city, leave the 18th century behind for some contemporary delights – the wonderful graffiti art on Kiefernstraße. Gifted street artists have transformed an ordinary street into a massive mishmash of images, paintings, splashes of colour and geometric patterns, with whole buildings covered in bright, bold murals.

Try a local speciality in the Altstadt

Head back to the Altstadt in the evening, and end it with the best burger in the city at Bob & Mary. The eponymous restaurateurs – who opened their inaugural venue in Düsseldorf in 2014 after scouring the world for the best burgers – now have three restaurants, all with hip, colourful interiors and great food. As well as the juicy burgers and unique sauces, there’s a salad menu if you’re after lighter fare. Finish the Düsseldorf tour with an altbier, the city’s traditional German-style brown ale, in one of the 300 bars, breweries and pubs in the Altstadt – the Füchschen Brewery is a good choice that also serves traditional German food. 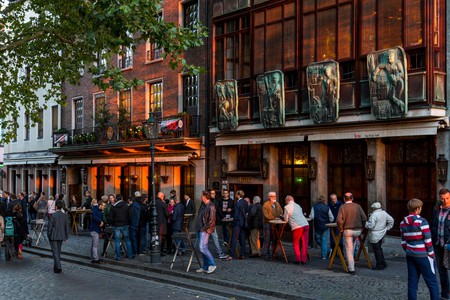 Try an altbier, the local ale, in one of the many bars in Düsseldorf’s charming Altstadt area | © Jochen Tack / Alamy Stock Photo