How to Spend 24 Hours in Marburg, Germany 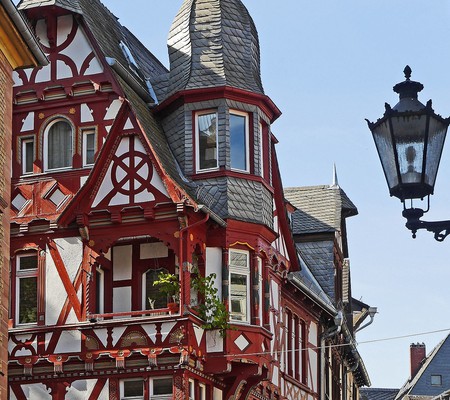 An hour north of Frankfurt, the picturesque town of Marburg clasps to the river Lahn. The university established in 1527 is the reason Marburg is largely populated by a young crowd, which shows up in the large number of hip bars, cafés, and music venues around town. But despite the many 20-somethings that rush to the Lahn meadows for barbecues and picnics as soon as the sun’s out, the winding cobblestone streets of Marburg’s old town take you past some notable historic sights. Here are a few ideas on how to spend 24 hours in Marburg.

Since we’ve already mentioned the many cafés, why not start the day with a sumptuous breakfast. Located in the centre of things, Café Barfuß is a great starting point for a day’s worth of exploring. In its nearly-40 years the café has become one the most popular eateries in town, and to this day it charms guests with its offbeat atmosphere and great food. Breakfast is available between 10am and 1pm, and you can pick between various platters of buns, sweet and savoury spreads, cheeses and sandwich meats, as well as eggs and muesli. 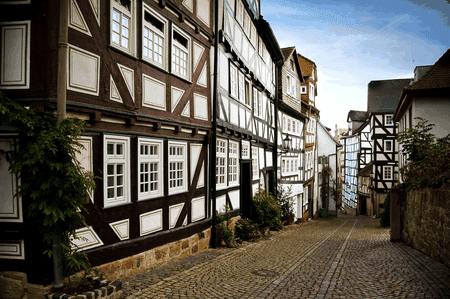 Marburg is composed of two parts: the historical centre of Oberstadt, which sits on a hill; and via a set of stairs and elevators it’s connected to Unterstadt, the newer part of town below. The mid-morning is best spent browsing Oberstadt’s shop windows and exploring the historic sights. You’ll quickly realise that the old town is a complex web of narrow streets and alleys which crawl up the hillside and are connected via more steep staircases and passageways. The old market square with the 1512 town hall still is the pivotal point of the bustling centre. Cafés, restaurants, small boutiques, and renowned brands have moved into the medieval, half-timbered houses around which define the Oberstadt cityscape. 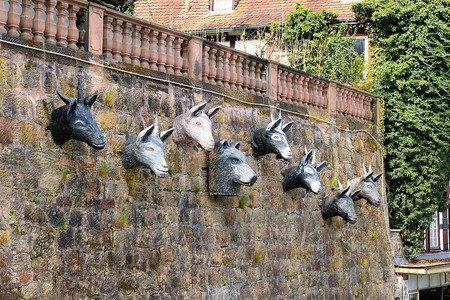 The Wolf and the Seven Young Kids | © Hydro / WikiCommons

The magical flair has spruced many of the Brothers Grimm fairy tales during their studies at Marburg university between 1802 and 1805. A themed path zig-zags across the town and commemorates their works at 15 stops along the way. One of them is their former apartment at the corner of Barfüßerstraße and Wendelgasse.

You’ll make it to Reitgasse eventually. Keep your eyes peeled for Enge Gasse, which translates to ‘narrow alley’, and follow its winding steps down to Die Pause. The quaint café is known for the unique atmosphere spread by the cosy indoors and the idyllic contorted outside terraces. Their yummy food is homemade, and throughout the day changes between delicious breakfast foods, daily lunch meals, crêpes, quiches, soups, tarts, cakes, and more. 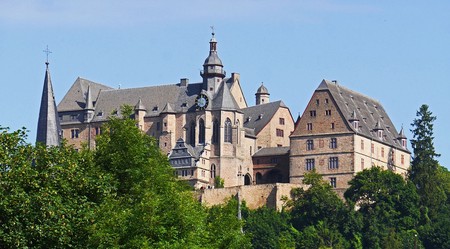 Invigorated, it’s time to climb further up the cobblestone streets. Have a peek inside the St Mary’s parish church on your way to the hilltop. Perched on Marburg’s highest hill towers the huge Landgrave Castle, and the lookout point at its foot gives you panoramic views of the city below. Originally built as a fort between 1248 and 1300, the castle was later used as the residence of Hessian Landgrave. Today, it hosts the odd concert and film screening, and houses a cultural history museum. Between April and October, guided tours grant a more in-depth glance at the past and present of Marburg’s most important landmark.

Stroll back through the centre and into Unterstadt and spend the rest of the afternoon at the Lahn waterfront. If you’re in the mood and the weather plays along, see if you can rent a canoe and paddle down the stream for a bit. Alternatively, pick one of the beer gardens or cafés to stretch your legs. 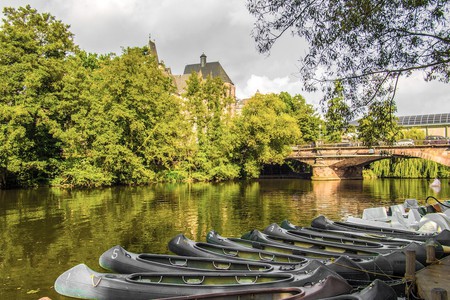 Marburg boasts some fantastic restaurants, and the food ranges from hearty Hessian specialities to falafel and Ethiopian cuisine. Post-dinner explorations of the city centre will give you even more options. Many of the locales that served coffee and croissants in the morning have swapped their menu for cocktails and draught beer. Delirium mit Frazzkeller is a popular student hang-out, while jazz lovers retreat to Cavete and the Sudhaus gastro pub attracts a mixed crowd of all ages, to name a few. A lot of places are open until late and allow you to party out the final hours of your trip.