What To Do in Munich

Home to some of Europe’s greatest cultural treasures, Munich is packed with lovely sights, museums and endless steins of beer. Seeing it all in one day may seem impossible at first, but Culture Trip helps narrow it down. Here are the best experiences travellers can have in Munich in just 24 hours. 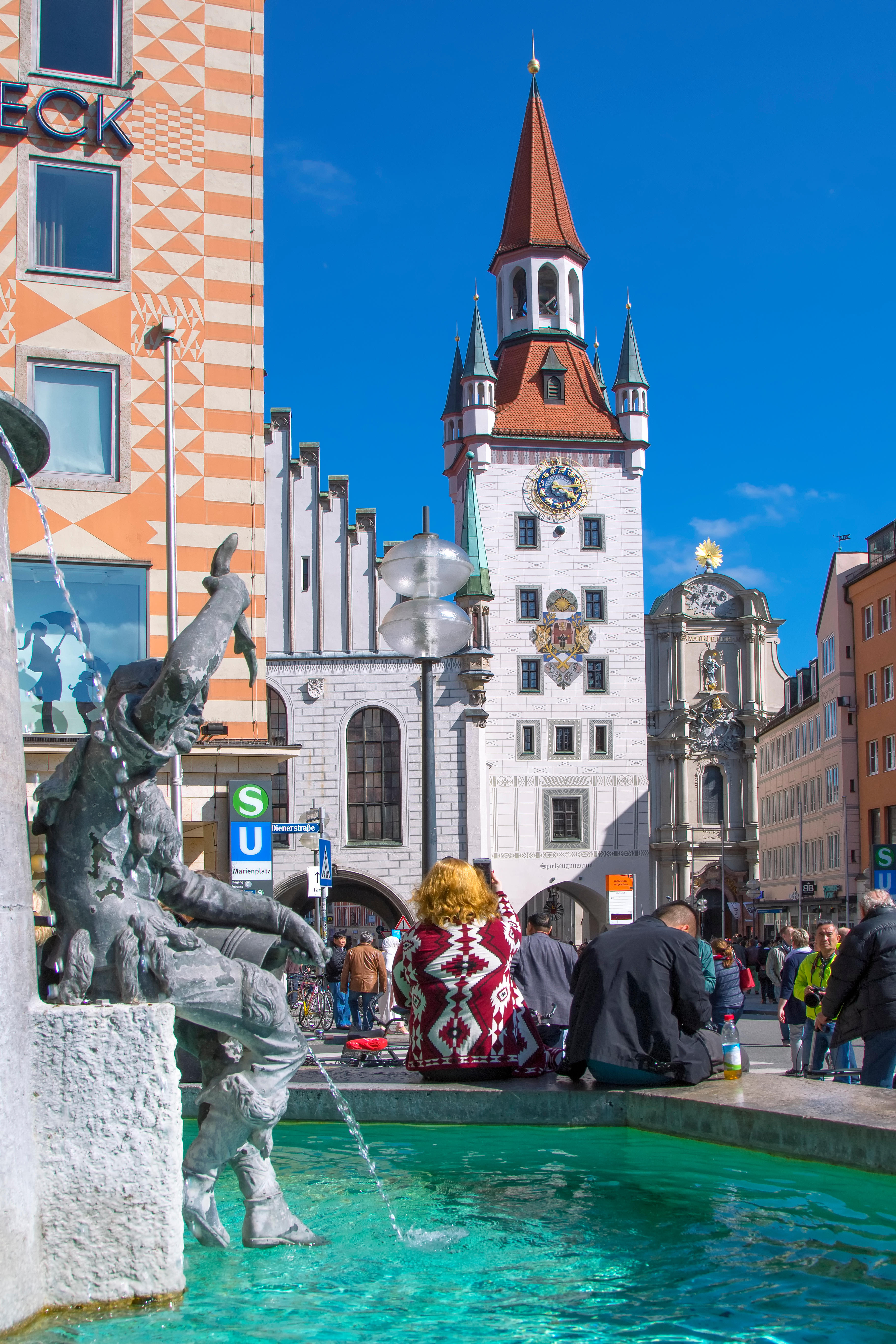 As Germany’s third-largest city, Munich blends a thriving beer tradition with beautiful green parks and palaces. The Bavarian capital is known for its laid-back atmosphere and having plenty of things to do, and while the city is quite large, most of the main attractions are within walking distance of each other or easily accessible by taking a short U-Bahn trip. All of this makes it the perfect place to spend a day, so here’s a 24-hour itinerary to give you a taste of Munich.

Start your day with a bite to eat at Viktualienmarkt. Often called the ‘stomach of Munich’, this huge open-air food market is the best place to sample authentic Bavarian cuisine. Wander around the dozens of stalls (most open up around 8am), and nibble on traditional obatzda cheese, pretzels, sausages and fresh fruit juice.

After enjoying a tasty breakfast (and picking up some snacks for a picnic lunch later), take the short stroll over to Marienplatz, the beautiful central square of Munich’s old town. As the cultural and geographical heart of Munich, Marienplatz is filled with government buildings, churches, restaurants and bars. Try to visit around 11am or noon to catch the 43-bell Rathaus-Glockenspiel (clock) show and see motorised figurines act out famous events in Munich’s history. 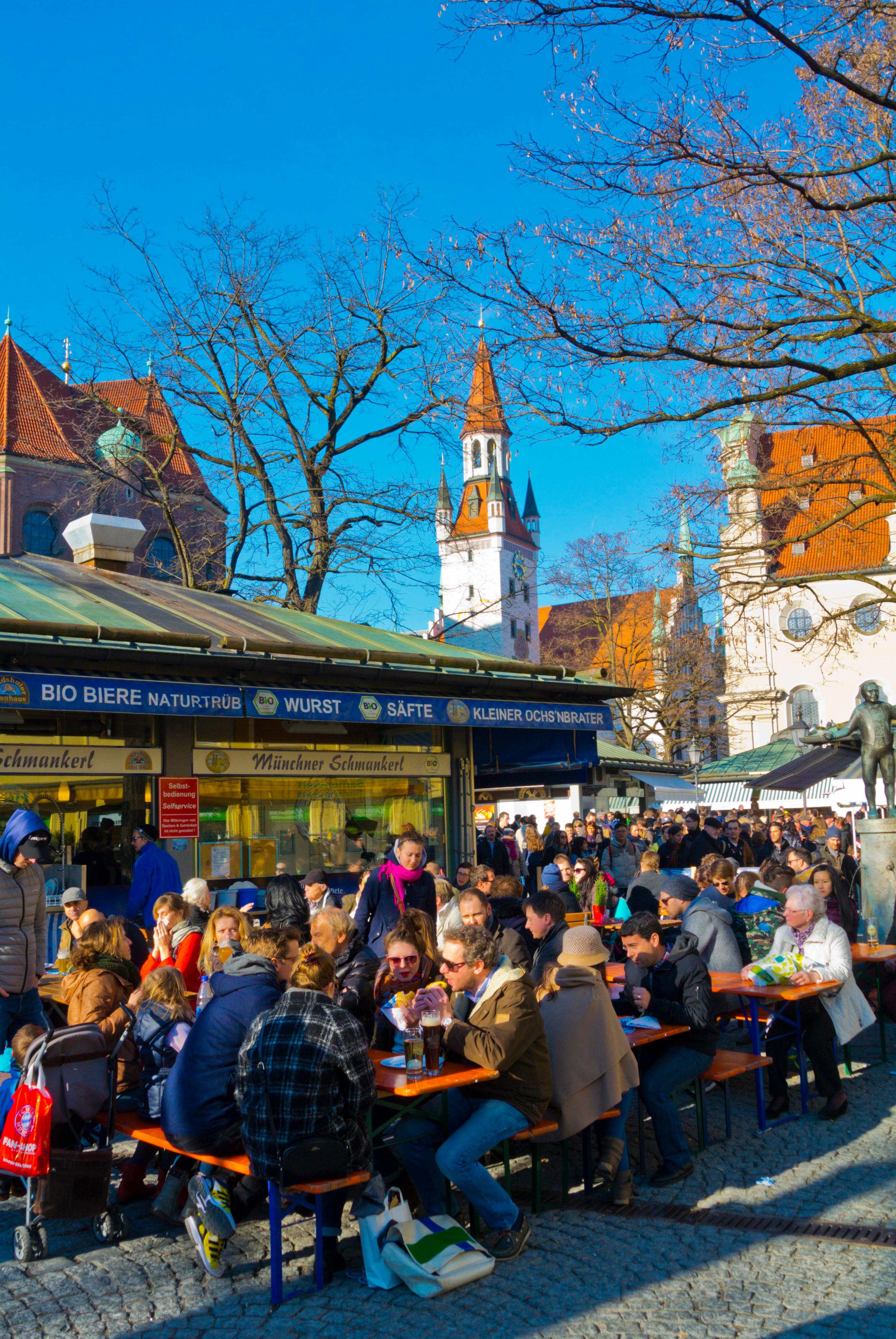 Pro Tip: Most stores in Germany are closed on Sunday, including the Viktualienmarkt, so plan your trip carefully.

As one of Europe’s largest city parks, the English Garden is a sprawling green playground popular with residents and visitors alike. Luckily, it only takes a short amount of time to reach the garden from Marienplatz. You can take a 20-minute walk or a 10-minute U-Bahn trip using the U3 or U6 train to the Üniversitat stop. Make like a true Münchner and explore the park’s many meandering paths by bike; bike rentals are available through the city’s bike-sharing app (MVG More) or local companies.

Once you reach the garden, make your way past the Kleinhesseloher See, a pretty lake at the park’s centre. Relax with a picnic lunch by the edge of the water and enjoy some prime people-watching. During summer, you’re likely to spot sunbathing residents (some in the nude, in classic German fashion), university students lounging in the grass and kids playing football.

Afterwards, visit the Eisbachwelle, famous for being the largest spot for city-centre surfing. Every day, crowds of surfers line up to take a turn shredding the continuous wave. Watch the action for a bit before cycling to the Monopteros, a small Greek temple offering incredibly photogenic views of the Munich skyline. 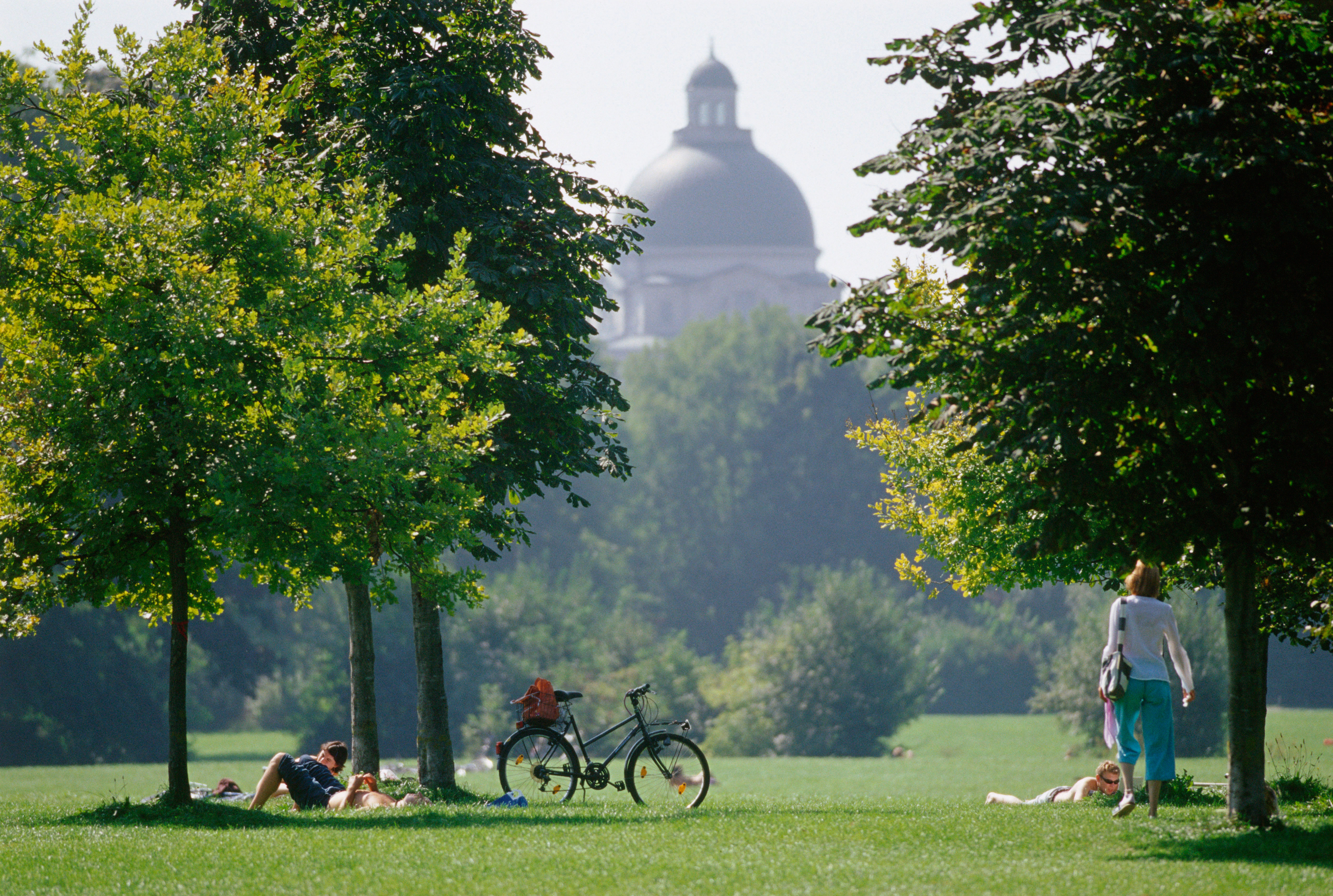 Few things are as sacred to Bavarians as beer gardens. As it’s home to the highest number of beer gardens in the world, no day in Munich is complete without enjoying this beloved tradition. The English Garden contains a couple of great beer gardens, including the popular Chinesischer Turm – which offers a choice between dining indoors at the restaurant or in the self-service beer garden – and Seehaus, a scenic little beer garden on the banks of the Kleinhesseloher See.

Here you can enjoy a Maß of Helles (lager) beer and classic Bavarian fare like Schweinshax’n (roasted pork knuckle) or Steckerlfisch (fish grilled on a stick), along with potato salad and other vegan and vegetarian options. Dine inside the restaurant or snag one of the popular lakeside tables in the beer garden and watch as the sun sets over the water. 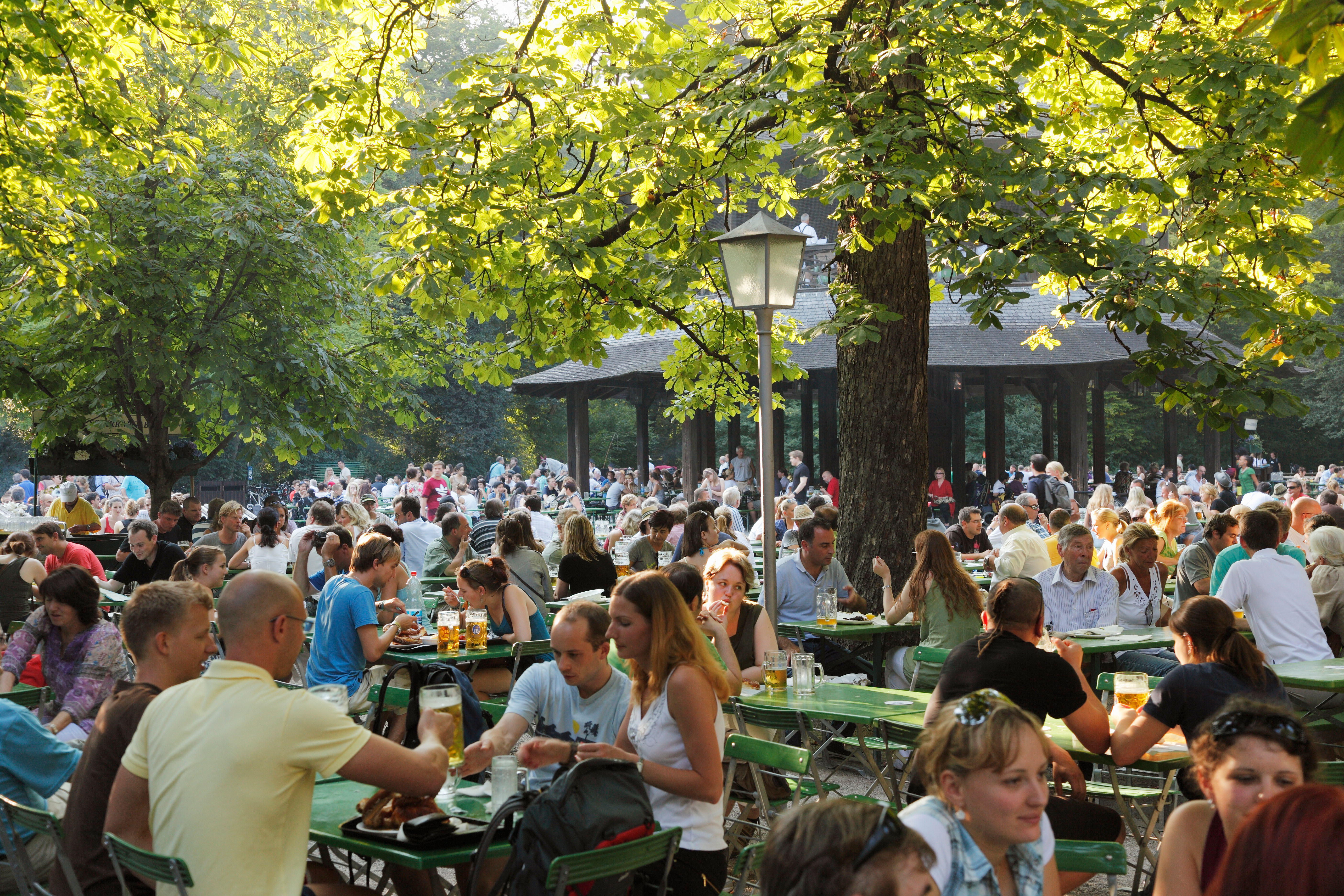 Pro Tip: “Cash is king” is more than a saying in Germany; it’s a way of life. An estimated 80 percent of all transactions are made in cash, and many stores and shops will not accept credit cards. It’s a good idea to keep some cash on hand while travelling in the country.

Night: Have a stein (or a few) at Hofbräuhaus

After the sun goes down, visit the granddaddy of Munich beer halls: Hofbräuhaus. It’s always Oktoberfest in this fabled three-storey brewery, which dates back to 1589 when it was built by the Duke of Bavaria. Many famous faces have passed through these doors over the years, including Mozart, who used to visit for a few steins while he was composing an opera.

Upon entering, you will notice an elaborately painted ceiling, an abundance of lederhosen and dirndls, and crowded wooden tables. After you grab a seat, place your order with a member of the staff, and prepare to say “Prost!” among singing drinkers and the in-house oompah band.

Located in the centre of the city, within walking distance of the Marienplatz U-Bahn stop, Hofbräuhaus prides itself on being open every day of the year, including Christmas. Try and get here early, as it’s not possible to reserve tables. 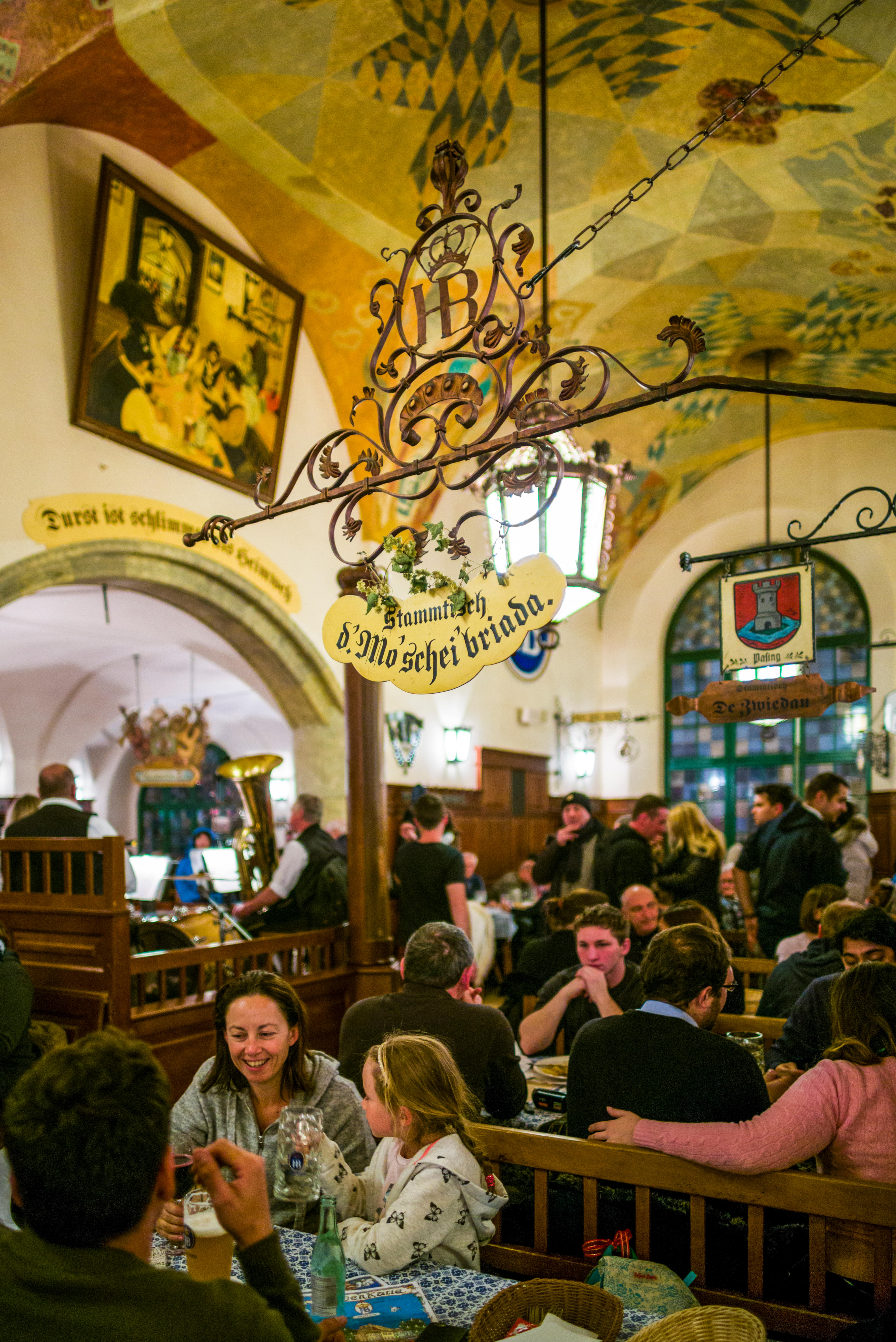 As the oldest beer hall in Munich, Hofbräuhaus is an attraction that can’t be missed | © Danita Delimont / Alamy Stock Photo

Pro Tip: Munich is home to a variety of great beer festivals, including Oktoberfest, which runs from the end of September to early October. The popular Strong Beer Festival is also worth checking out and runs during March and April.