How to Spend 24 Hours in Goslar, Germany 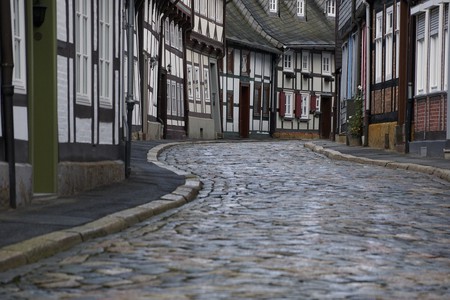 Goslar is a gem of a town, situated at the northern fringe of the Harz Mountains. Founded in 922 AD, the city has maintained much of its medieval charm, with the cobbled alleys, half-timbered houses and the Imperial Palace, which was once the residence of Heinrich III. Much of it has earned a spot on the UNESCO World Heritage Site list and a day in town is just about enough to cover the highlights, so brace yourselves for a full day of sightseeing.

Since breakfast is the most important meal of the day, Die Butterhanne is the first stop on the list. This cute and cosy restaurant occupies a charming 500-year-old house that once served as guildhall of the felt hatters. All day long, the tavern serves delightful food that has earned stellar reviews on all platforms. The a-la-carte breakfast menu lists typical items, ranging from bread, buns and pastries with sweet and savoury toppings to scrambled eggs and an all-time German favourite called Strammer Max, which describes slices of farmhouse bread with ham and fried eggs.

Once you’ve fuelled up on food and coffee, step outside to find yourself surrounded by a stunning ensemble of half-timbered houses, which have helped Goslar earn a spot on the list of UNESCO World Heritage Sites. The impeccably conserved medieval remnants are strung along the cobbled alleys of the Old Town and can be explored as part of a guided tour arranged by the tourist office. The pre-scheduled tours only run in German, though, but foreign-language tours for groups can be booked in advance. That said, Goslar is relatively small, so you can easily venture off on your own as well. Either way, a stroll around the romantic web of small streets, to snap shots of the beautifully decorated façades, is the perfect way to start your day. 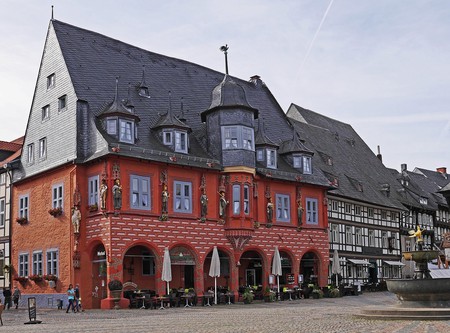 Within two hours, you’ll pass the most majestic old houses, idyllic courtyards and imposing fortifications of the Old Town. The Great Holy Cross was built in the mid-13th century and provided food and shelter for the poor, sick and orphaned of Goslar, and also welcomed pilgrims and travellers with open arms. Even today, part of the complex serves as a home for the elderly.

The Lohmühle water mill is the only one remaining of initially 40 in town, and still creaks on, while the Broad Gate is a relict of Goslar’s 16th-century defence structure. One of the most beautiful buildings is the so-called Brusstuch Haus, which stuns with its crooked walls, intricate wood carvings and murals depicting antique mythological creatures and symbols.

Also worth seeing is the picturesque Frankenberger Plane Square with the adjoining Small Holy Cross hospital, as well as the Schuhhof Square, which is flanked by timber-framed houses on one side and stunning arcades of the Shoe Maker’s Guildhall on the other.

Back at Market Square, head to the Town Hall. Construction of this imposing building started in the 15th century and stretched across 400 years, during which time it was continuously extended. Its most spectacular part stems from the early days: The Hall of Homage is decked out in colourful murals from floor to ceiling, painted on wood panels. The overwhelming artwork is currently closed off to the public due to construction work on the building, but is set to re-open later this year with a newly installed multimedia experience – so make sure you check the official Goslar webpage ahead of time.

Keep an eye on the time. Four times a day – at 9am, 12pm, 3pm and 6pm – three small doors open up at the shingled front of the old treasury on the other side of the plaza, and a number of small figurines emerge. They tell the story of the renowned Rammelsberg mine, which brought prosperity to Goslar. The spectacle is accompanied by the sound of carillon bells. 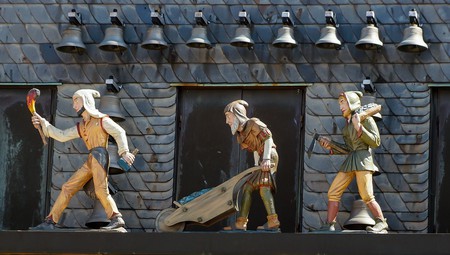 Pick a bistro or café on Market Square for a quick lunch before following the Old Town alleys up the hill to one of the sightseeing highlights for the day. The Imperial Palace (€7.50) was built in 1040 AD, and the elaborate artworks and murals on the upper floors draw tens of thousands of visitors to the Harz Mountains every year. Downstairs, a permanent exhibition displays artefacts depicting what life under the rule of Heinrich III was like. It’s well worth renting an audio guide for an additional €2.50, to learn more about the history of the building and the imperial rule. 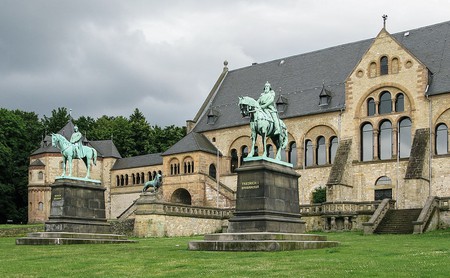 Highlight number two on our list is the Rammelsberg Mining Museum. The mines played a crucial part in the economic development of the region and they are the world’s only mines operating for more than 1000 years without interruption. If you can, join a guided tour around the complex (pre-booking for non-German tours is required). The vast site is composed of various fascinating elements, including the 10th-century slag heaps, vaults and water wheels.

Inside the Rammelsberg mines | © yeowatzup / WikiCommons

Once back in the Old Town, it’s time to treat yourself to some of the culinary specialities the Harz Mountains are known for. A peek at the local menus might lure you back into Butterhanne, which by now has switched from breakfast platters to delightful dinner options – think Harz-style Sauerbraten, grilled ox meat, Käsespätzle (the German mac and cheese) or beef roulades. Vegetarians and vegans can inform the staff of their diet, and the chef is sure to whip up something.

After your meal, head next door to the Brauhaus Goslar brewery and sample some of their home-brewed creations. There’s hardly a better way to end a jam-packed day of exploring than with a cold beer.