How to Spend 24 Hours in Coburg 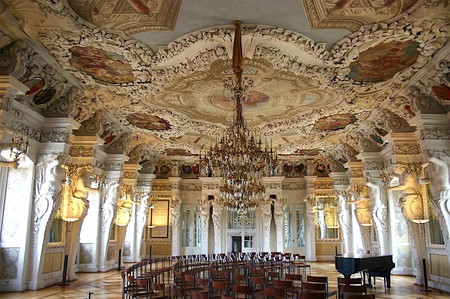 Munich, Nuremberg, Bamberg, and Rothenburg ob der Tauber usually all rank high when it comes to listing Germany’s must-see villages and cities. Coburg, on the other hand, is a somewhat lesser known gem at the northern fringe of Bavaria’s state border, but boasts a quaint Old Town and a number of fascinating palaces, castles and fortresses. Here’s our guide to spending a day in Coburg.

Before you start your jam-packed day of exploring this charming city, get some breakfast first. Café Feiler in Coburg’s Old Town has been rewarded with stellar reviews, and a glance at the menu leaves nothing to be desired if you’re looking for a yummy breakfast. Differently themed platters incorporate all kinds of goodies – the Bavarian breakfast is composed of white sausages and soft pretzels, the French-themed one features a café au lait, croissants and marmalade, and the Turkish platter comes with black tea, ham, Turkish cheese and olives. But that’s far from it, a whole list of extras is available, so are fried or scrambled eggs and omelettes, muesli and granola, plus a bunch of vegan spreads. 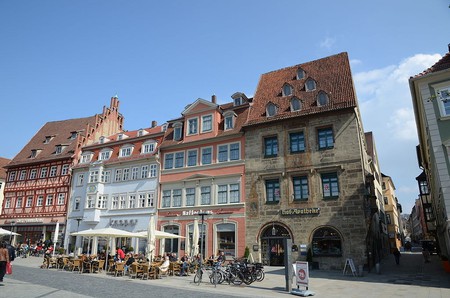 Most of Coburg’s highlights are scattered across the Old Town and easily explored on foot on your own. Nonetheless, if you make it to the tourist information centre at Herrngasse 4 by 11am (2pm on Saturdays), and you speak German, you can also join a walking tour of the historic town centre for €6. Otherwise, you can rent an audio guide from the tourist information centre that covers more than 65 stops all over the city.

Whichever way you choose to explore, make sure you don’t miss the main sights. If you follow the web of cobblestoned streets, it won’t be long until you end up at the beautiful market square. Encircled by pastel-coloured historic houses and the imposing City Hall, the old market is arguably one of the most charming places in town, especially when it provides the backdrop for the enchanting annual Christmas market in December.

The Protestant Moritz Church – Coburg’s oldest – should go on your list as well. Parts of the structure date back to the 14th century, and Martin Luther, the figurehead of the Protestant Reformation, is known to have given a number of sermons here in 1530.

Another not-to-miss attraction is Ehrenburg Palace. The grand palace was one the residence of the Coburg dukes and the place where Prince Albert, the man who in 1840 married Queen Victoria, grew up. Taking a guided tour is mandatory and worth it. You’ll be taken around 25 stunning rooms that give you an inside of how the city nobility used to live. The throne room is preserved in its original state of elaborately decorated ceilings, stucco ornaments, velvet-covered walls and hardwood floors. The highlight is the Hall of Giants with its Baroque ceiling and no less than 28 Atlas statues as supports for the ceiling.

Grab lunch at one of the city-centre cafés and bistros to refuel. Café Pfannküchle is dedicated to both sweet and savoury German-style pancakes, while Café M dishes up soups, salads and different lunch deals from burritos to Flammkuchen.

A stroll through the vast castle parks and gardens takes you up a hill and to the fairytale-like medieval fortress Veste Coburg. Like the city itself, the 11th-century fort doesn’t see too many foreign tourists despite being one of the largest and best-preserved fortifications in all of Germany. The complex is surrounded three rings of walls and overseen by several towers. The inside holds a fascinating collection of armour and weaponry, hunting devices, the world’s oldest surviving horse carriages and an impressive art collection of paintings by Rembrandt, Dürer and others. There’s so much to see that you can easily spend all afternoon exploring the rooms at your own pace. The cover charge is €8, and another €2 allows you to rent an audio guide for your time here. 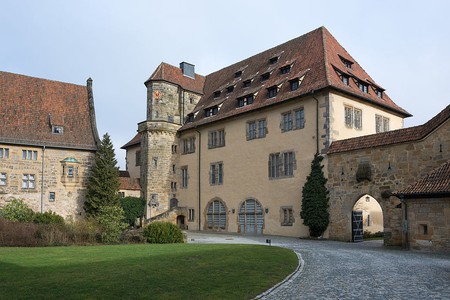 Back in town, it’s time to treat yourself to some local food and drink. There are numerous options that have Franconian and Bavarian specialities on the menu, as well as wheat beer on tap. Gasthaus Goldenes Kreuz occupies the rooms of one of the oldest buildings in the city and woos guests with a rustic interior and culinary treats along the lines of roast beef and Klöße, sausages and a glass of Kreuztrunk beer. Restaurant Loreley is almost next door and another beauty of Coburg’s food scene. Here you can get all kinds of German treats from potato dumplings to schnitzel and herring fillet. Another good restaurant is Hopfen & Malz, which mixes authentically Franconian dishes with a range of other meals, vegan options included.

Given you’re in Bavaria, you’ll be spoilt for choice when looking for a place to get a post-dinner beer. The Hungry Highlander does not only have people rave about their food but also about the atmosphere, which is fuelled by several regional beers on tap and the odd live music performance. The same goes for Sonderbar, which is a popular spot as well and open until late on weekend nights.