How to Dress for Winter in Germany 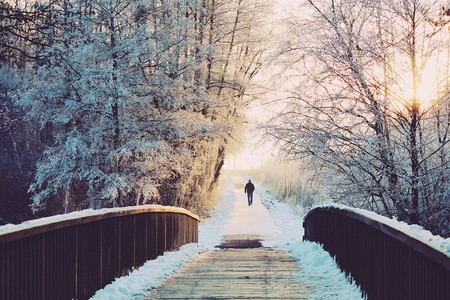 You’re planning to travel to Germany in the winter – congratulations! Except what sort of winter is a German winter? Assuming you’re not going on a ski holiday, exactly how many pairs of snow pants do you need? Read our guide on how to stay warm and how to not stick out when you’re on a winter holiday in Germany. We’ll start in Hamburg in the north and work our way south to Munich.

Hamburg is near the North Sea, which means it is wet and windy even in the summer. Winter here is sort of cold, with -2°C (28°F) being an extreme low, but you will feel much colder because the air is so damp. It doesn’t snow much, and if it does it’s pretty light. Expect instead icy sleet.

Recommendation: Jettison the snow boots in favour of several light layers and a warm scarf. A water-resistant jacket wouldn’t hurt, but Germans don’t tend to dress for mountain climbing in their day-to-day lives. 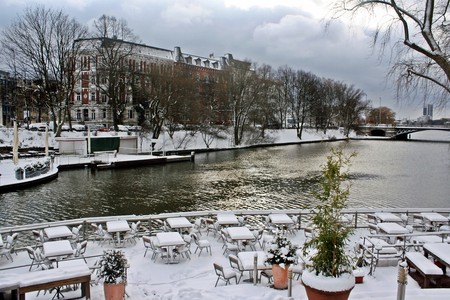 A street café on the Alster in winter, Hamburg, Germany | © olleaugust/Pixabay

Cologne is in the tropical part of Germany. Winter is cold, of course, but rarely bitter or windy. The air is also damp, especially for someone from North America who is used to a colder, but drier climate. The temperature ranges from 0°C to 8°C (32°F to 46°F), so the ground is almost never cold enough for any falling snow to stay around more than a couple of hours. The biggest problem in winter is not the cold, but the endless grey sky.

Recommendation: Think cosy more than full winter protection. Thin gloves and a thin to medium scarf are all you’ll need. People here do wear hats and boots, but regular shoes will be fine for holidaymakers as long as you stay in the city. Bring an umbrella.

Berlin is damp like Hamburg and Cologne, but residents here get the added gift of bitter coldness to go with it. Snowfall is regular from December to March though in the city centre, but the buildings warm the air enough that it rarely stays around for long. Temperatures get down to about -5°C (23°F), though days nearer -20°C (-4°F) have been recorded.

Recommendation: a warm jacket, scarf and gloves are essential. A full 1970s fur hat isn’t necessary, but most people will wear some sort of light knitted hat and medium-weight boots. If you’re planning to walk around a lot and don’t come from a place with a heavy winter, regular shoes won’t be warm enough and are likely to get wet. 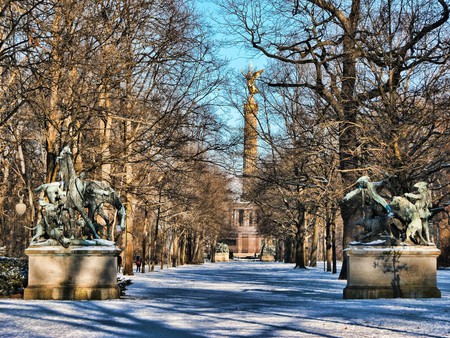 Even further east lie Dresden and Leipzig, where temperatures regularly dip as low as -10°C (14°F). Russian tourists who come for a visit do so in fur coats. Like Cologne, worse than the cold, which is not insubstantial, is the darkness. Dresden and Leipzig average 90 minutes of sunshine a day.

Recommendation: You’ll be walking around a lot when you’re in the city, so make sure to bring warm boots, a hat, scarf, and warm jacket. As long as you keep moving, long underwear shouldn’t be necessary. Make sure you have a decent camera with you. You’ll be taking a lot of photographs in low light.

The weather is confusing in Munich because of the mountains. When the wind comes over the Alps in a south-westerly direction, temperatures jump up even in winter. When the wind is north-westerly, the mercury heads straight for the basement. It is difficult to predict what’s going to happen. The average temperature in January is -3°C (26.5°F). The hours of sunshine jumps dramatically from 90 minutes per day in December to three hours per day in February.

Recommendation: The key to weather success in Munich is being flexible. As such, don’t bring one giant Canada Goose parka, bring instead several thinner layers. Boots would probably be useful, as would a hat, scarf, and gloves. Should the weather shoot up to unseasonably warm temperatures, you can jettison all but the thinnest of layers and still be comfortable. 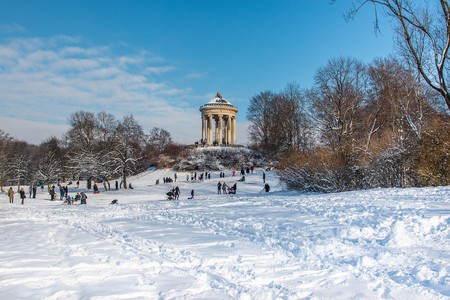 Not sure what to pack? Here’s a list of brands that Germans wear often in the winter.

This Swedish company has been around since the 1960s and makes backpacks and jackets from tent fabric. All the cool kids wear their stuff and it’s available in every German outdoor store.

This Swiss company – which has been around for 150 years – makes winter jackets and other outdoor clothes for people that have a lot of spare cash laying around and want others to know it, but discreetly. Much in the same way North Face works in North America.

Stone Island is an Italian company and is popular with the football crowd, which is roughly analogous to the urban, streetwear crowd in the US. It is common to see young men in the city wearing shiny, puffy jackets with the telltale Stone Island compass patch on the sleeve

For those who prefer a tailored, quilted, faux-fur-trimmed winter style, the best plan is to head straight to Moncler. Coats cost around €1,000, but you will not rock Instagram harder than you will in one of their puffy pieces of insulated magic.

For everyone who can’t afford clothes from the other shops on the list, and to be honest, that is most Germans, there’s Jack Wolfskin. It’s everywhere, on everyone, for everything.