History Of Englischer Garten In 1 Minute

The story of Munich’s beloved Englischer Garten began in 1789. Prince Charles Theodore, Bavaria’s elector at the time, decided to convert his hunting grounds into a public park in order to gain the favor of his subjects. Over the next two centuries, continuous efforts have been made to cultivate this beautiful English-style garden.

Under the instruction of British inventor, physicist, and Bavarian aide-de-camp, Benjamin Thompson, plans for the park commenced. In its first years, such developments included the construction of a river wall, planting trees, and setting paths throughout the premises. Many soldiers were even given civilian leave to supply the manpower needed to develop the garden.

Next, the park’s statement architectural fixtures were erected. These included the Apollo Temple, the Chinese Tower, the Military Hall (now known as the Rumford Hall), and the Hamlos Statue. Over the decades that followed the park grew in size, as over 100 hectares of additional land and the area surrounding the Kleinhesseloher See were incorporated into its premises. Despite all this, the gardens still seemed rather shabby in their early years, as it was largely used for agricultural purposes. 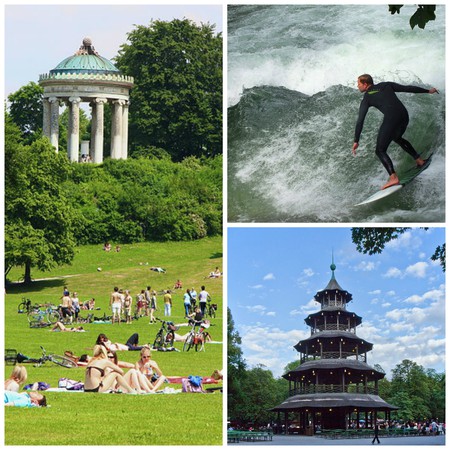 Not until Friedrich Ludwig von Sckell was appointed superintendent of Bavaria’s gardens did the park begin to take the ornamental form that we cherish it for today. Over the course of its existence, Englischer Garten has experienced near constant improvements and renovations, as the city has long attempted to preserve the beauty of this massive green space dedicated to the public.

Now the park consists of 417 hectares of land, making it one of the largest city parks in the world – larger than both London’s Hyde Park and New York’s Central Park. From the famed hill known as the Monopteros, Englischer Garten offers splendid views of the city. Its grounds also contain jogging and cycling paths as well as multiple recreational football fields. There are now many restaurants and a Japanese Teahouse, as well as several beer gardens including one at the Chinese Tower, which seats around 7,000 patrons. The River Isar remains a popular spot for surfing within the Englischer Garten as well.

Englischer Garten receives over five million visitors annually, and it remains a vital aspect of recreation and culture in Munich. For more information about visiting Englischer Garten, check out their website here.