Get to Know the Tree in Germany That Brings Singles Together 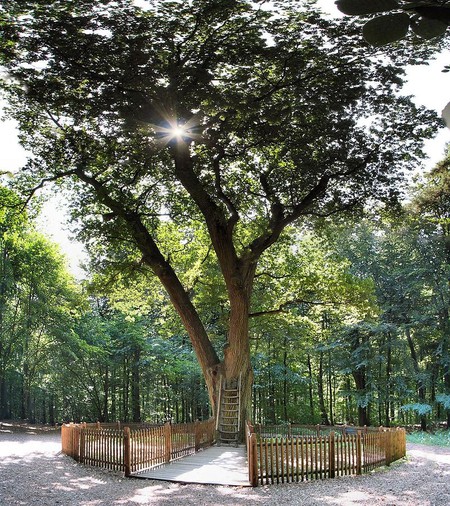 In a little German town called Eutin, people still fall in love the old-fashioned way, through hand-written letters and destiny. Meet the celebrity oak tree that has been bringing together dreamers from around the world long before dating apps were even conceived.

The 500-year-old tree is a registered national monument and is the first tree in the world to have its own postal address and postman. People looking for love write to the tree, hoping that it will reach the right person, and it often does! A hole high up in the tree trunk, which serves as the postbox, can be reached by a three-meter-tall wooden ladder resting against the trunk. It is lovingly referred to as the Bridegroom’s Oak (in German: Bräutigamseiche).

The tree itself was symbolically married in 2009 to the Himmelgeist Chestnut, a horse-chestnut tree in Düsseldorf, the second tree with a postal address. The long-distance relationship worked great for six years, until the chestnut tree died of old age. 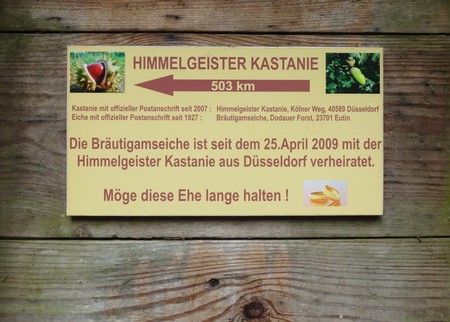 Plaque announcing the marriage of the Bridegroom’s Oak | © Holger.Ellgaard / WikiCommons

Love it or leave it

Anyone can climb the ladder and open any letter they want to. If they don’t wish to respond to a letter, they simply need to put it back in the postbox.

The story behind it

The history of the tree as a postbox dates back to the late 19th century. It is believed that the daughter of the local head forester, Minna, fell in love with the son of a chocolate maker from Leipzig, Wilhelm. Since Minna’s father didn’t approve of the match, the young lovers used to secretly leave notes for each other in the trunk of the oak tree. Later, the father had a change of heart, and the couple tied the knot under the very tree on June 2, 1891.

The coolest job in the world

In 1927, to keep up with the vast amount of mail the tree was receiving, Deutsche Post assigned the tree its own postal address and postman. Six days a week, a postman delivers letters to the tree from hopeful hearts around the world.

On the occasion of Valentine’s Day 2018, BBC did a feature on the Bridegroom’s Oak, wherein a correspondent had a heart-to-heart with 72-year-old Karl-Heinz Martens, a postman who delivered letters to the tree from 1984 to 2004. Explaining why he loved his job, he puts it beautifully – “On the internet, facts and questions match people, but at the tree, it’s a beautiful coincidence – like fate.”

The tree receives at least 1,000 letters per year, from all over the world, written in a number of languages. Martens remembers delivering up to 50 letters a day, and counted only 10 days in 20 years when he didn’t have any letter to deliver to the oak.

Even after retiring, Martens keeps coming back to the tree that changed his life. More on that to follow. 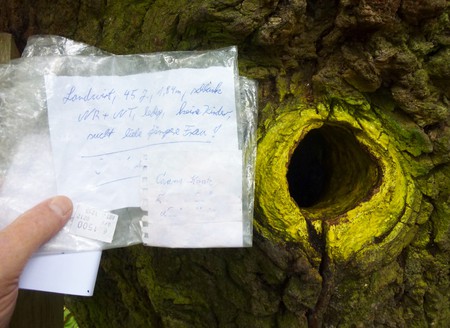 A letter delivered to the tree | © Holger.Ellgaard / WikiCommons

The tree is believed to be responsible for bringing together 100 couples in matrimony, including postman Karl-Heinz Martens and his wife Renate. In 1989, Martens featured in a TV program about the oak tree where he was asked if he had found love in the postbox. He answered in the negative. A few days later, he discovered a letter addressed to him from Renate. One thing led to another, and the couple said their vows under the tree in 1994.

Another beautiful story involves a young German soldier named Peter Pump, who found a note in the tree with only a name and address written on it. As fate would have it, he responded and the couple celebrated their 57th wedding anniversary in 2018.

The tree also brought together loving hearts from two sides of the infamous Berlin Wall. A 19-year-old named Claudia from East Germany and farmer Friedrich Christiansen from West Germany fell in love with each others’ written words, and met only when the Wall came down. They married in May 1990. 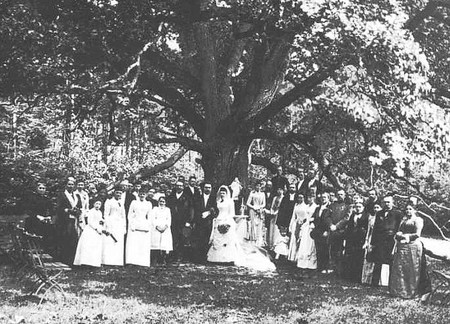 A wedding under the oak in 1900 | via WikiCommons

If this story stirs the romantic in you and you wish to give fate a chance, write to the tree at Bräutigamseiche, Dodauer Forst, 23701 Eutin, Germany. You can also, of course, visit this legendary tree in person.