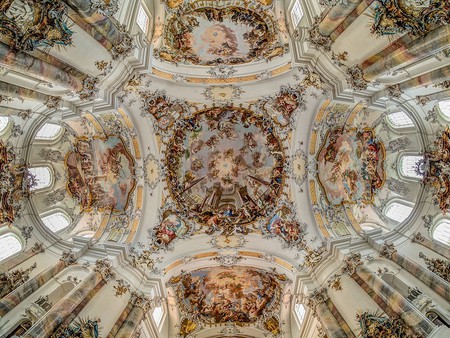 You only to need to glance over the list of beautiful cathedrals scattered across Germany to realise that the country is a treasure trove for those who appreciate imposing works of ecclesial architecture. And Germany does not stop the grand impression there; it also boasts a plethora of beautiful monasteries. Check out our list below for the highlights. 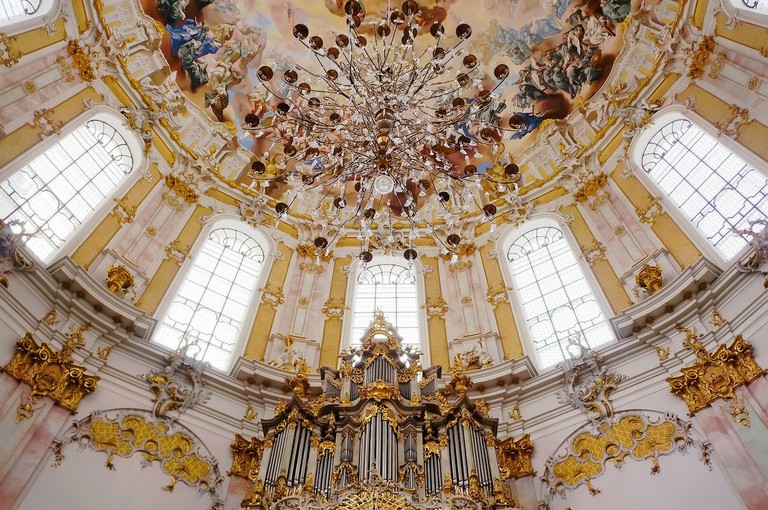 Jaw-dropping alpine vistas, opulent palaces and winter sports fun are only some of the reasons why Oberammergau should be added to your list of must-visit places in Germany. Another one is Ettal Abbey, a Benedictine monastery situated in a neighbouring village only a five-minute drive from Oberammergau. The palatial-built and castle-like grounds alone demonstrate the significance and independence established by the religious community over time, and to this day the monks living here run a hotel, on-site brewery and publishing house. It’s no doubt impressive, but wait until you set foot in the abbey church. The original Gothic design was modest, but thanks to a Baroque makeover the church shines in a lavish splendour of colourful frescoes, stucco ornaments and filigree gold décor. In celebration of its 1330 foundation, Emperor Louis IV gifted the marble statuette of the Ettal Madonna, which earned a spot on the high altar. 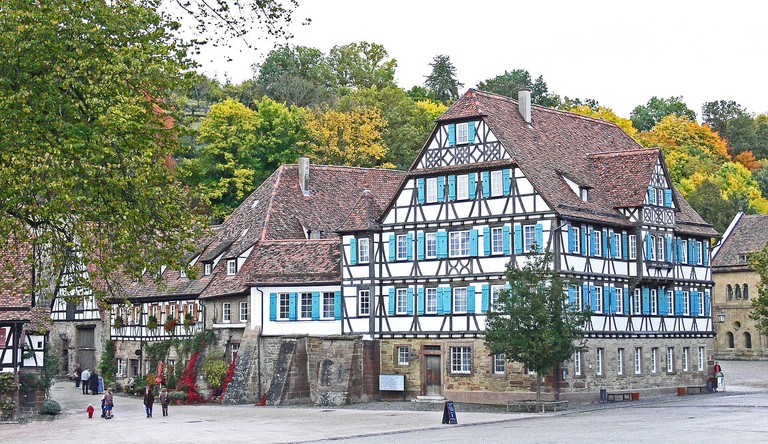 The Maulbronn Monastery is one of Baden-Württemberg’s main attractions and a well-deserved UNESCO World Heritage Site. With an 850-year-long history, the complex has undergone some changes over time, but boasts a well-preserved architectural mix that integrates some of its original Romanesque features up to elements from the late-Gothic period. Once a Roman Catholic Cistercian Abbey, Maulbronn now serves multiple purposes and houses an administrative office, a boarding school, police station and restaurants, all of which are still enclosed by medieval walls and towers. A tour of the impressive complex involves the Gothic cloister, the fountain house and the Romanesque monastery, which stand beautifully-decorated with murals and frescoes. 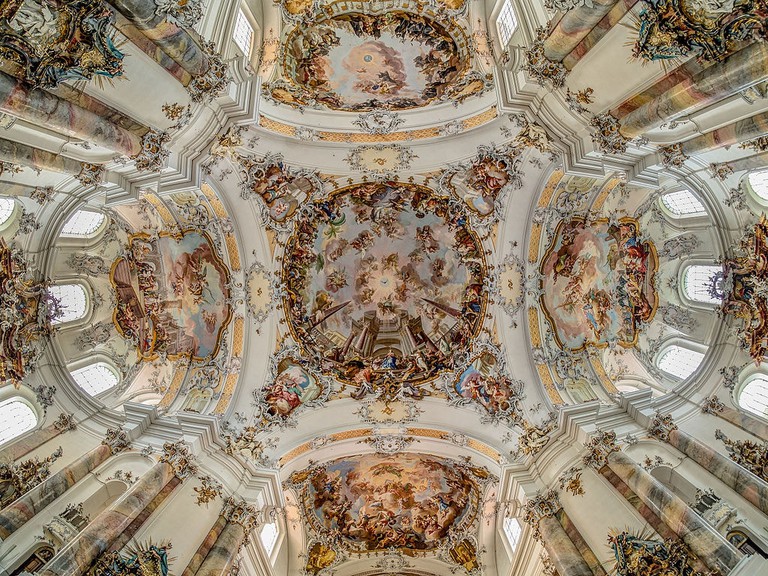 2014 marked the 1,250th anniversary of the Ottobeuren monastery, which draws visitors from all over the world to Memmingen, 115 kilometres west of Munich. The Benedictine abbey is known for a wealth of cultural and ecclesial treasures, and it’s worth joining a guided tour to learn about what’s considered one of the most significant Baroque churches in Bavaria, an onsite gallery with fine art from the Baroque and late-Gothic period, the jaw-dropping Emperor’s Hall, the Theatre Hall – which is no less impressive – and the library that houses more than 15,000 literary works from the 12th to the early-19th century. Throughout the complex, you’ll be amazed by spectacular frescoes, stucco décor, statuettes, marble elements and the Holy Trinity organ, a unique pipe organ design only found here in the basilica. 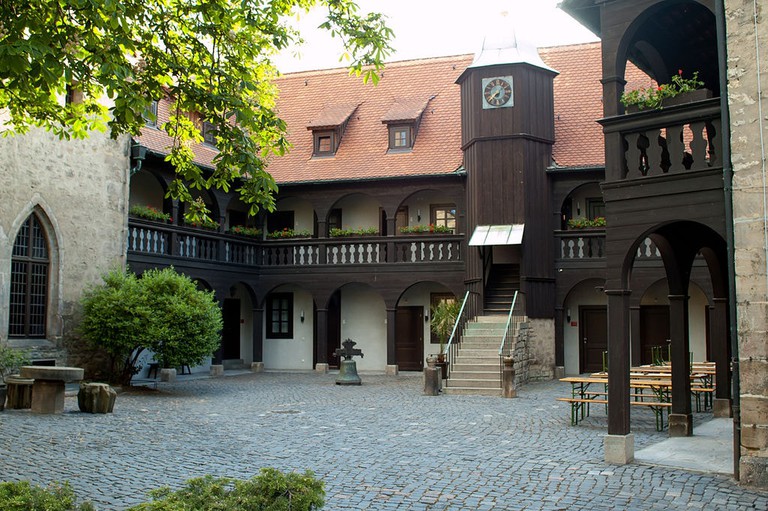 With more than 700 years of history under its belt, the Monastery of St Augustine in Erfurt looks back on an eventful past: much of the original building was destroyed and rebuilt, artworks were lost or stolen, orphaned children were cared for and brought up here and influential preachers underwent their training. One of them was none other than the figurehead of the Protestant Reformation, Martin Luther, who joined the monastery as a monk in 1505. Seeing his former room is one of the highlights of a guided tour around the complex, which also covers the museum exhibition, several monuments dedicated to the revolutionary, and the stunning chapel. 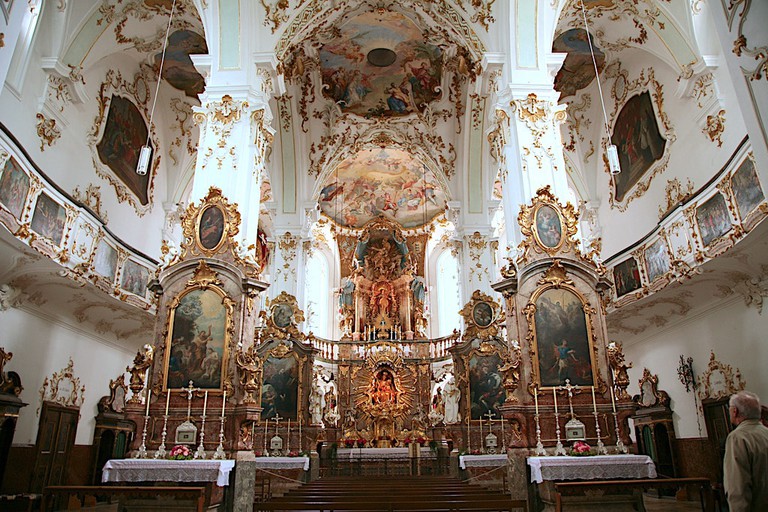 Perched on the top of the so-called Holy Mountain near Ammersee lake, 45 kilometres south-west of Munich, the flamboyant Baroque church of Andechs Monastery draws pilgrims, lovers of opulent architecture and beer aficionados to the Bavarian countryside. The pilgrimage church was built between 1420 and 1430 and reconstructed several times after it fell victim to the Thirty Years War and a raging fire. In celebration of its 300th anniversary, the interior was redesigned to resemble a festive Rococo-style hall with marble columns, gilded stucco ornaments, and elaborate paintings. 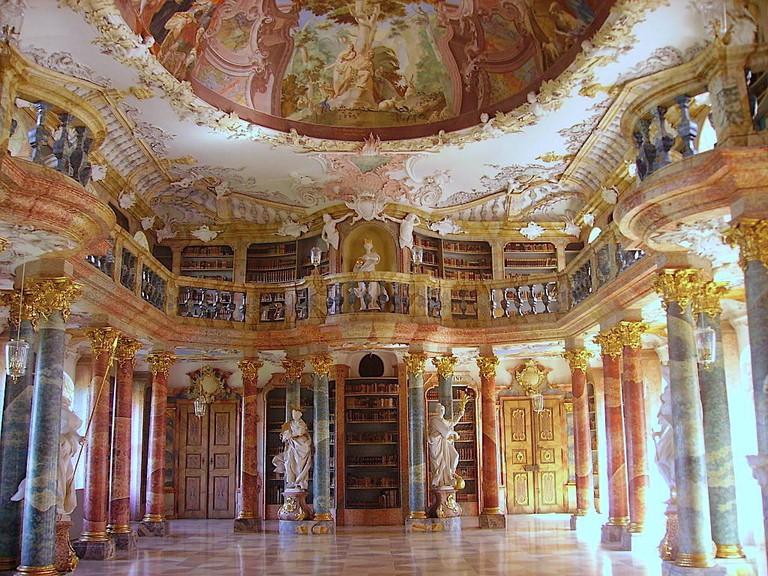 Another masterpiece of Baroque architecture is found in Wiblingen, halfway between Stuttgart and Munich. The entire monastery complex is nothing short of impressive. Founded in 1093, the monastery was inhabited by Benedectine monks for most of its existence, and in 1714 major renovations turned the abbey into a prime example of exuberant Baroque architecture. The monumental church shines in a white and gold interior, making the pastel-coloured, large frescoes a real eye catcher. The highlight of a visit to the complex, though, is the library. Green and rose-coloured marble columns frame shelves and marble statues, gold and stucco elements decorate walls and ceilings and draw the eye to the marvellous fresco by Januarius Zick, an 18th-century master of his craft. 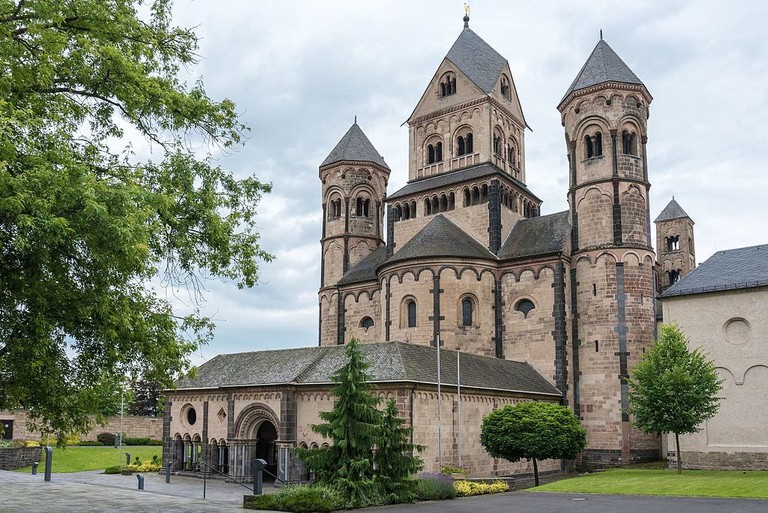 Founded in 1093, Maria Laach Abbey proves that you don’t need Baroque opulence to create impressive sacred buildings. The abbey’s basilica is situated at the shoreline of the Laacher crater lake in the Eifel region, and stands as a masterpiece of Romanesque architecture. Boasting six soaring towers, an arcaded gallery and a large westwork typical of the period, the abbey is quite an impressive sight. Once you enter, your eyes will be drawn to the large mosaic and the stained-glass windows. If you do visit, make sure to book a guided tour of the 19th-century monastery library. An estimated 260,000 books are stacked on the wooden shelves across four floors connected by a winding, cast-iron staircase.