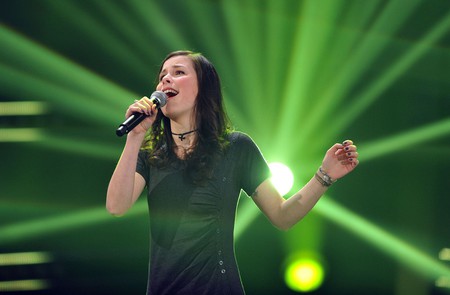 It’s safe to say Germany loves Eurovision. The country is one of the founding members of the contest and, apart from 1996, has entered every single year since it began in 1956. And, German participants go all out. Even the nil point-ers are classy as hell. Remember Nora Nova, Ulla Wiesner and Ann Sophie? Seriously, all robbed.

It has won the contest twice – in 1982 and 2010 – but its performance in the past few years has been pretty dismal. Singer Levina has been drafted in to turn things around for them with the track ‘Perfect Life’ at the final in Kiev on Saturday.

Until then, we’ve compiled some of their best and worst entries.

MORE: The Worst Eurovision Songs From Around the World

Let’s start off with the best…

Thirty five years on and Nicole’s message of peace and understanding (the title translates to ‘A Little Peace’) is more relevant than ever. This folky ballad, performed by the 17-year-old high school student, stormed to victory at the 1982 contest and gave Germany its first ever win. It also set the record for the largest winning margin – one that was only beaten in 1997.

Bursting forth like a Disney villain on a Boney M flavoured disco trip, Dschinghis Khan (English translation: Genghis Khan) was West Germany’s entry in the 1979 contest in Jerusalem. Ridiculous but just brilliant.

Some killer harmonising and intricate choreography landed girl group Mekado in third place with this upbeat number in 1994, although many thought that they’d been robbed and deserved to win (us included).

This perky love song has the hallmark of quality when it comes to Eurovision in that it works as a standalone track outside of the contest. German singer Lena Meyer-Landrut provides the sweet and simple vocals, helping the country to its second win in 2010.

Another Lena this time round, who delivered a touching ballad about a blind boy shunned by other children because of his disability, but goes on to become a famous musician.

An underrated pop gem from singer Elaiza, who resembles P!nk in both looks and vocals; it only managed to rank 18th place in the 2014 contest. Shame.

Lena seems to have the magic touch. Brought back to defend her title in 2011, she went for a more sultry offering with ‘Taken by a Stranger’. Sadly, it wasn’t enough to make her the second contestant to win Eurovision twice, since Johnny Logan did it in 1980 and 1987.

Already a huge star in Europe, Cascada’s Euro dance track bafflingly went down like a lead balloon with judges, although it has remained an enduring favourite of Eurovision fans.

Katja represented Germany three times – in 1970, 1971 and 1980. This was her second attempt for Eurovision glory and it showcased her powerful voice and got her to third place. Ebstein is the most successful performer in the contest without ever actually having won.

Mary Roos was another singer who got more than one crack at the whip at representing Germany. She participated in 1972 and 1984, although this sassy track was her most successful attempt, finishing in third place.

Then it all goes downhill…

Husband and wife team, Glen J Penniston and Tatjana Cheyenne Penniston performed this religiously-themed ballad but no one was impressed by their declarations of love for God. Apart from Malta – the only country to give them any points. Just one, in fact.

Another low scorer for Germany with only 10 points for this lacklustre ballad, which is inoffensively bland to its core.

No Angels were one of Germany’s most successful girl bands – until they appeared on Eurovision in 2008. They were visibly nervous, at times out of tune and missed notes. Their performance, which placed them 23rd, effectively consigned their careers to the dustbin of pop history.

You’ll want to run and hide after listening to Gracia sing. She really hits those top notes. Hard. It won a measly four points.

Guildo Horn came seventh with ‘Guildo hat euch lieb!’ (which translates to: Guildo loves you!). Before the contest, Guildo fever spread throughout Germany although his performance on the night, which ended with him climbing scaffolding, was frankly quite embarrassing.