Germany’s Castles: Their Beauty And History 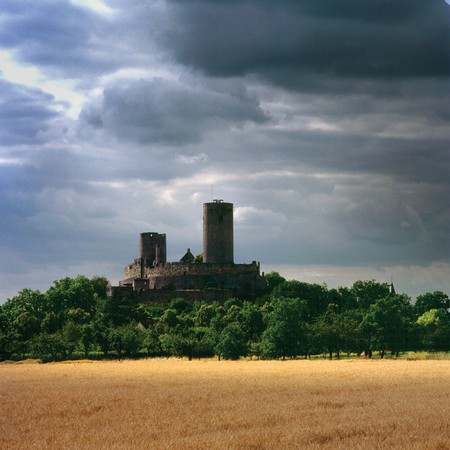 When the U.S. Army sent Ed Kane to Germany in 1955, the nation’s extensive collection of castles became something of an obsession for him. Germany is home to approximately 12,000 castles (either still standing or in ruins), with that number going up to 20,000 if the castles in what was once the Holy Roman Empire (which includes parts of present day Austria, Italy, and Switzerland) are also included. In his book Roads to Ruins, Kane presents images and illustrations of 198 castles, ruins, and maps. In the extract below, Kane gives a brief history of the events that led to explosion of castle building in Medieval Germany. 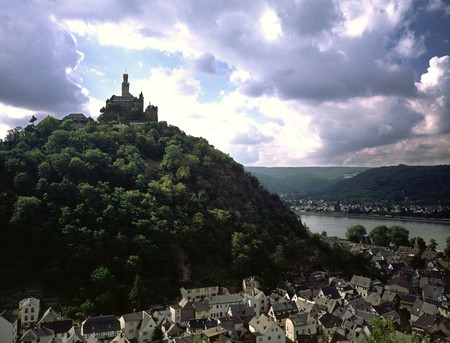 Fortified structures were neither a German innovation nor a product of the Middle Ages. Kingdoms, communities and conquerors were building fortifications long before the Germanic tribes began their push south. Defensive use of stone may have first taken shape in the form of village walls, but fortifications of extraordinary strength and complexity dating centuries before the present era are continually being unearthed today. According to archaeological conclusions based on recent discoveries, large scale assaults on villages appear to have occurred as long ago as 3,500 B.C. With such an ancient record of organized warfare it is not too far-fetched to assume early lessons were learned from such experiences. The most logical preventive measure might have been to construct barricades, first in the form of wood palisades, but any material that tended to make unwelcome advances difficult or painful, including thorns and thickets, was better than no defensive efforts at all. Any obstruction that inhibited the advance of an enemy provided critical time to implement a defensive strategy. Similar primitive defenses were still used by the later and more sophisticated Romans in the outer reaches of their empire, and similarities can be seen centuries later in the American cavalry’s western forts in the 19th century.

The centuries of invasive enterprises of the Romans from the South, Vikings from the North, and the multitude of marauding tribes and nomads from the East, each wreaking their own special brand of terror, necessitated construction of border, royal and community fortifications throughout Europe. But individual castle building is what sets Europe apart from previous defensive constructions.

Personal castle building was concentrated in areas of France as a consequence of increasing Viking raids until circumstances opened the floodgates in Germany in the late 11th century.

Prior to that time compound style defenses in their simplest form, known as motte and bailey castles, were composed of wood palisades, often topping embankments creating defensible enclosures. An additional palisade within a motte and bailey enclosure may have surrounded the lower portion of a central mound (the motte). When possible the motte was a natural feature of the terrain but more often it was man-made. Topping the motte was a keep or tower which itself may have been surrounded by yet another palisade. Areas enclosed by the lower outer and inner palisades were the bailies. A ditch (moat) often was cut around the entire complex and an additional ditch may have been dug separating the bailey from the motte. The ditch also provided the mounding material for the motte when no natural hillock was convenient and for any embankments constructed within the moated perimeter. The bailey provided for both a secure food and weapons production and storage area and a first line of defense during raids. Given adequate warning of impending raids the villagers under the protection of the lord took refuge inside the bailey. As they did they brought stores of food and livestock into the defensive perimeter to sustain them in the event of a long siege. 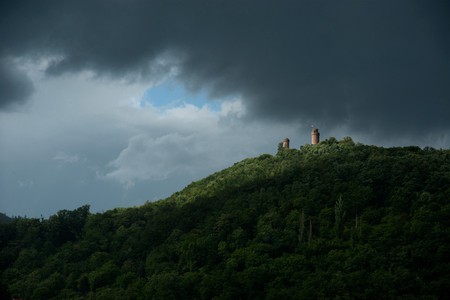 Over centuries the uses for the bailey and the sophistication of the tower increased. The palisade and underlying rampart became thicker and higher, and its construction more complex. This form of fort or castle remained in use long after stone castles made their appearance in areas of Europe. Their designs were less complex, employed locally available labor and materials and, because construction required no special skills, labor costs were minimal. In fact, palisaded enclosures have been known to have been constructed by assaulting forces in locations where they blocked re-supply and re-enforcement routes to a besieged castle. It provided the besiegers with their own defensible enclosure to store the supplies of war and provide cover within which they could regroup and repair. 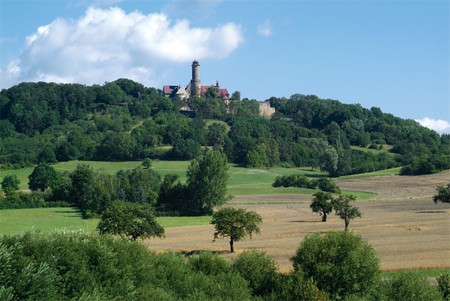 The timber motte and bailey’s most critical vulnerabilities – and the primary reasons for its gradual replacement with stone – were its natural impermanence and the relative ease with which it could be destroyed, especially by fire, long a favored weapon of medieval warfare. None of the original wooden structures remains today. Where the original wood castles successfully defended and exploited their strategic locations, they were eventually replaced by stone castles, whose construction obliterated all signs of the wooden originals’ existence.

In their time however they did serve their purpose. They were especially useful in providing protection from, and as a deterrent to, raiding parties bent only on what might best be described as the practice of storming, slaughtering and stealing, then vanishing just as quickly as they appeared. Unfortified communities were plentiful enough that marauders normally avoided conflicts that could entail serious risks. The motte and bailey fortification however was not capable of withstanding an assault by a determined invader skilled in siege and storm techniques, or a motivated cadre of professional soldiers under strong leadership whose intent was territorial conquest. 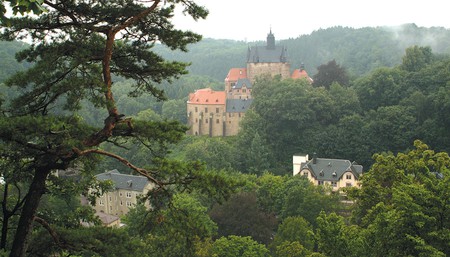 Until the advent of feudalism castles were constructed, as previously mentioned, by kings or emperors to protect their outer reaches from invaders or to secure and expand newly conquered territories. Village fortifications were constructed as community efforts for community defense. With feudalism, or in periods of near anarchy, it seems every minor noble in possession of allodial lands or who was granted a fief felt compelled to construct a private castle for the defense of his own territory. Also common was the castle built by a lesser noble on the command of a higher lord to whom territorial defense service was owed.

The very purpose of such a structure often dictated selection of the most forbidding terrain available. Critical to defensive strategies, whenever the land allowed, was to make the approach of an adversary both as obvious and as arduous as possible. Those requirements made construction an excruciating test of man over material, methods and nature. To make the effort even more challenging, construction was often underway while suffering the punishment of attack, adding battle to the list of problems encountered. If such deterrents were not onerous enough to dissuade the noble desirous of a castle the many difficulties, dangers and great expenses inherent in the quarrying and transporting of materials would certainly have given him cause to reconsider. Whereas motte and bailey construction was facilitated by the near proximity and abundance of the low cost primary materials – timber and earth – appropriate stone for more substantial defensive elements was rarely convenient. Design and construction of the vastly more complex layout also required specialists, incurring additional high investments. 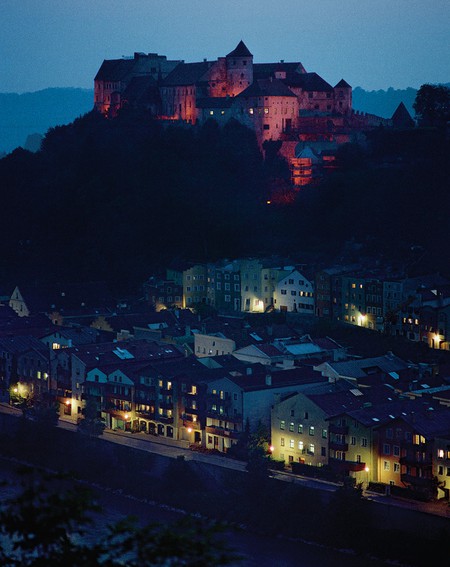 While military architects toiled at matching the requirements of an effective layout to an unforgiving terrain and designing impenetrable defensive elements for the castle, weapons developers and tacticians worked equally hard to negate each innovation. It might even have been the same skilled designers working both ends of the tactical environment. Survival throughout medieval and ancient history stimulated inventiveness on both sides of the lines of belligerence making defense as well as offense more destructive and precise. As in today’s weapons innovations the object was to inflict as much injury and exact as much destruction from as great a distance as possible, thus giving rise to various inventions and improvements. The long bow, cross bow, trebuchet, catapult, ram and finally gunpowder and cannon all were designed to overcome the castle’s battlements, machicolations, arrow loops, portcullises, murder holes, curtain walls, barbicans and ditches as well as to gain advantage in open-field battle. For the most part these defensive and offensive innovations were known centuries before the Middle Ages. Refinements improved the accuracy and destructiveness of the weapons, introduced new tactics, and made some weapons, once considered ungentlemanly, the order of the day. Major changes often occurred as consequences of other advances such as the discoveries of metallurgy and masonry and the hidden power of tension and torque. The field of metallurgy was especially critical to the individual knight, for the strength of his sword could be the leading edge that would carry the next battlefield encounter. 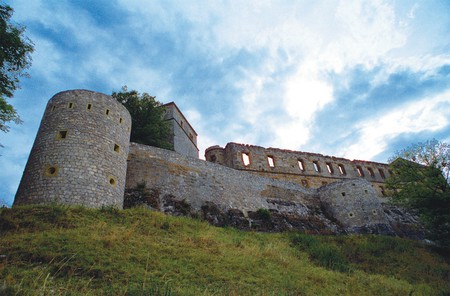 Each battle, each adversarial attempt to breach the castle’s perimeter, and each excursion to other lands brought new ideas in design and construction that would help make the castle impenetrable. Of course each new idea had to have the funds and manpower to produce and implement it, so castle building was not a venture taken lightly by high nobility with shallow coffers. Nonetheless there was apparently no shortage of ambitious men willing to invest in the castles that peppered Germany. In fact, the histories of perhaps thousands of castle records attest to the needs of knights, nobles and monarchs alike to resort to pledging castles to secure loans to finance their commitments and ambitions.

Extracted from Roads to Ruins by Ed Kane