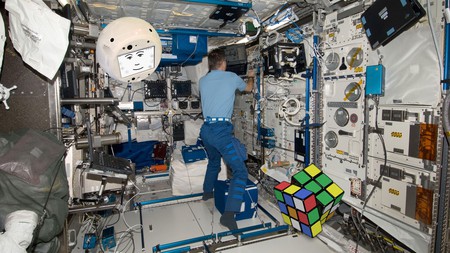 CIMON in action on the ISS | © Airbus

The robot, called CIMON (Crew Interactive Mobile Companion), has an animated face and is designed to help astronauts with their everyday tasks on the ISS. The experiment is being undertaken by the DLR in cooperation with Airbus and IBM, and arrived at the station on July 2.

CIMON is not an all-powerful AI capable of turning on its crew, as seen in many a sci-fi movie, but is being sent to the space station to test how robots and astronauts can collaborate more in the future.

The robot is equipped with microphones and cameras that will help it recognize Alexander Gerst, the German astronaut it will work with. The robot weighs 5kg on Earth but in zero gravity will float around the station using 14 internal fans.

“In short, CIMON will be the first AI-based mission and flight assistance system,” said Manfred Jaumann, head of microgravity payloads at Airbus. “We are the first company in Europe to carry a free flyer, a kind of flying brain, to the ISS and to develop artificial intelligence for the crew on board the space station.” 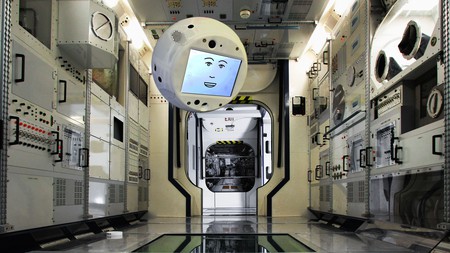 Cimon will float around the corridors of the ISS | © Airbus

CIMON was blasted off to the International Space Station by a SpaceX Falcon 9 rocket, along with crucial supplies. To put human-like social skills into CIMON, Airbus used IBM’s Watson AI, which has previously been used for multiple artificial intelligence purposes in industries as diverse as healthcare and universal translation.

“Right now our main mission is to support the astronauts with their daily tasks to save time, because time is the most valuable and most expensive thing on the ISS,” IBM engineer Matthias Biniok told Reuters.

Watson operates by connecting to the IBM cloud and constantly streams data to Frankfurt, but in this case, Gerst asked for an off button should they want complete privacy. With one button the German astronaut can temporarily stop any data from leaving the space station.

The same capsule that contained CIMON also carried berries, ice cream, identical brown mice, and a replacement hand for the Canadarm, the gigantic arm used to handle and receive payloads at the ISS.