Everything You Need to Know About Düsseldorf's Carnival 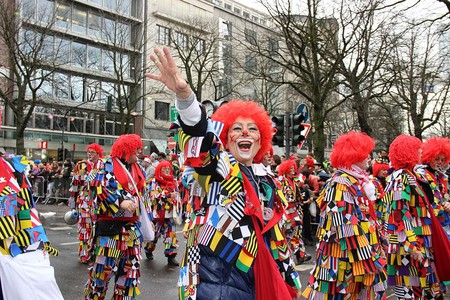 Along with Cologne and Mainz, Düsseldorf puts on one of the largest Carnival celebrations in Germany, involving colourful costumes, parades and a series of Carnival sessions and costume balls. Here’s an overview of what to expect from this loud and crazy festival.

Though the origins of the Düsseldorf Carnival remain unclear – some suspect the ancient Roman Saturnalia of having influenced it – historical documents reveal that German aristocratic families first celebrated the occasion in 1360 in Düsseldorf Palace. By the 15th century, the tradition had moved into Düsseldorf’s households and grew to be an integral part of the culture. The festivities escalated to the point that in the early 19th century, locals complained about the boisterous and vulgar nature of the celebrations, and the German king tried to lower the boom of the Carnival with a set of strict measures. When the French came to power, they prohibited the Carnival festival altogether, and it wasn’t until the Prussians took over that the Carnival tradition was brought back to life with costume balls and music performances and revellers poured into Düsseldorf’s streets and market squares again. 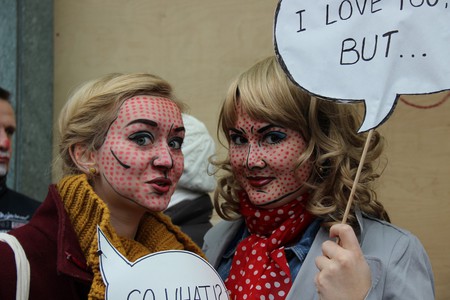 Taking their neighbouring city of Cologne as an example, Düsseldorf established its first Carnival Committee in 1825 in an attempt to structure the celebrations, laying the foundation for the Carnival as we know it today.

At 11:11 am on the dot on November 11, the Carnival season is kickstarted in Düsseldorf’s Old Town. Düsseldorf’s Carnival joker Hoppeditz awakes out of a giant mustard pot and proceeds to give a speech. Known as Narrenschelte – joker’s scolding – the speech is deliberately insulting yet hilarious and responded to by the city mayor who overlooks the ceremony from Town Hall balcony. The ceremony is followed by a day-long party that spans across the entire city centre before life goes back to normal the following day.

Throughout the winter months, the city sees some Carnival parties and sessions leading up to the main festivals which start on Fat Thursday, or Altweiberfastnacht. Once again at 11:11 am sharp, women in costumes storm into the Town Hall and cut off the mayor’s tie, symbolically taking control over the city.

From that point onward, the city descends into a crazy celebration. The bars and pubs in Düsseldorf’s old town crank up the music, and revellers dance and sing all the way through to the following morning. While Friday is usually quieter, those who can’t get enough make their way to the bar and nightclubs of the city for fancy dress parties with music ranging anywhere from the traditional Carnival songs to techno.

Saturday is dedicated to families and kids, when daycare centres, kindergartens and schools encourage children to wear costumes and join the procession around the city centre. The following Sunday finds Königsallee thronged by flocks of revellers celebrating the street carnival from first thing in the morning on Düsseldorf’s premium shopping street, Königsallee.

The celebrations culminate in the Rose Monday Parade. More than 30 music ensembles and 5,000 participants join the procession through the city. Elaborately built and decorated floats address cultural and political issues and can be satirical, hilarious and even controversial. Dressed in costumes, revellers throw sweets (Kamelle) and trinkets at the one million spectators lining the streets. There is dancing, singing, and food everywhere. Every few minutes, the war cry – Helau! – is shouted in chorus. 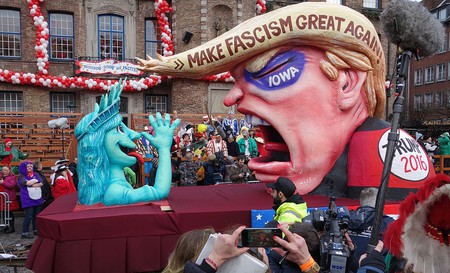 On Wednesday – Ash Wednesday – the effigy of Hoppeditz is burned amid dramatic wailing. Its remains are then symbolically buried, and the Düsseldorf Carnival is put to rest before the next season is kicked off on November 11 again.