The Top 10 Restaurants in Frankfurt, Germany 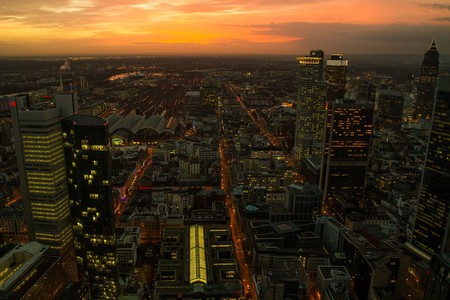 Frankfurt is home to one of the richest and most diverse culinary scenes in all of Germany. Traditional or modern, familiar or unusual, the cuisine here is as distinct as the city itself. Here are the 10 of the best restaurants in Frankfurt.

Restaurant, German, Soup, European
Facebook
Email
Twitter
Pinterest
Copy link
Share
Map View
Ideal for a quick and tasty lunch, Ebert’s Suppenstube is located in a local butcher’s shop. At lunchtime you can order a variety of soups and salads as well as the traditional German Bratwurst over the counter, all served with a hunk of bread. Here you can try some traditional German cuisine: potato soup and sausage topped off with a slice of rye. Whether your preference is for Currywurst or Rindwurst there is a wide range of Wurst to choose from. Although other shops in the area run a similar trade, nowhere is more popular than Ebert’s, making this a local favorite. Seating is limited inside, but ample seating outdoors making this the perfect spot to sit and enjoy lunch while taking in the populous bustle of Frankfurt.
Open In Google Maps
31 Große Bockenheimer Straße, Innenstadt I Frankfurt am Main, Hessen, 60313, Germany
+496920973877
Visit Website
Give us feedback 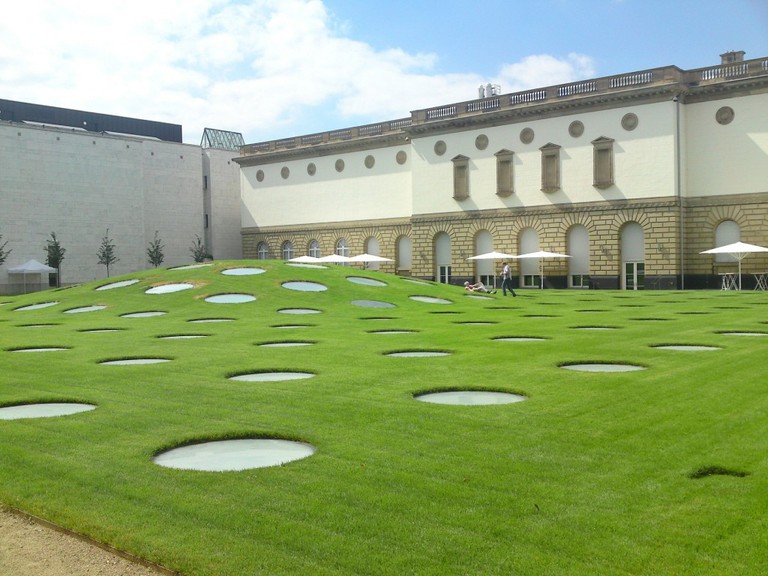 Städel Art Museum | © Pixabay
Holbein’s café and restaurant is beautifully situated on the River Main, which runs through central Frankfurt. It is attached to the Städel Art Museum which showcases the best of European art history across seven hundred years from Botticelli to Baselitz. Ideal for a light lunch after the exhibition, the strikingly modern architecture contrasts with the neo-classical façade of the museum. The menu is culturally varied, offering delicious sushi or more traditional German fare with its specialty, the Holbein’s Wurst.
Open In Google Maps
1 Holbeinstraße, Frankfurt am Main Süd Frankfurt am Main, Hessen, 60596, Germany
+496966056666
Visit Website
Give us feedback 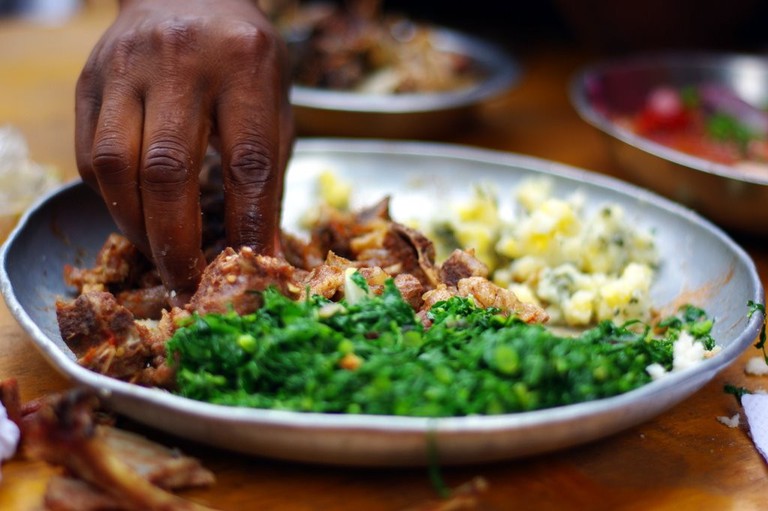 Nyama Choma in Kenya | ©Xiaojun Deng/Flickr
This restaurant, whose name translates to mean ‘in the heart of Africa,’ offers a different kind of cuisine from the usual European fare. The menu is East-African and in general, you eat these dishes with your hands. The large platters are designed for sharing, with everyone receiving a portion of bread with which to scoop up the rich flavors. The decor is also designed to complement the cuisine with sand on the floor and richly colored wall fixtures. Although there are traditional tables and chairs, this restaurant also offers the option of eating while seated on soft cushions on the floor. Book in advance as this place is invariably popular.
Open In Google Maps
13 Gutleutstraße, Innenstadt I Frankfurt am Main, Hessen, 60329, Germany
+496924246080
Visit Website
Give us feedback

Boutique Hotel, Chain Hotel
Facebook
Email
Twitter
Pinterest
Copy link
Share
Map View
View Rooms
Villa Rothschild, the country estate of the Rothschild family lies north-west of Frankfurt in Rothschild Park. It is now host to a luxurious hotel with a Michelin-starred restaurant that serves some of the best food in Frankfurt. Ranked among the 40 best restaurants in the whole of Germany and specializing in innovative cuisine based around classic French dishes, Villa Rothschild offers an unforgettable dining experience. From pigeon to veal to caviar, this restaurant is certainly not the cheapest in Frankfurt, but nowhere else does the food become such an artistic experience.
EVERYTHING YOU NEED TO KNOW

Zarges rekindles the spirit of Paris in Frankfurt. This is the best of French cuisine, with some German touches apparent in menu items like the asparagus soup and the Wiener Schnitzel. Otherwise, Zarges aims to provide the experience of Parisian fine dining, from lobster to goose liver to entrecôte. They also offer a selection of handmade cakes and pastries. Their ingredients are fresh and sourced locally. The restaurant is richly decorated in red and gold with low-level lighting and large wall paintings, giving it a feeling of opulence. Zarges is located in the vicinity of the old Opera House making it the perfect spot for dinner before or after the show.

Frankfurt is known as the financial center of Germany, and what better way to experience the high-flying lifestyle than with dinner at the Main Tower restaurant. Standing at 56 stories high, Main Tower is now a familiar sight in the high-rise skyline of Frankfurt’s banking quarter. The restaurant is located on the 53rd floor with full-length windows that provide the best possible views over the city below.
Open In Google Maps
52-58 Neue Mainzer Straße, Innenstadt I Frankfurt am Main, Hessen, 60311, Germany
+496936504777
Visit Website
Visit Facebook page
Give us feedback

The menu at Villa Merton places a high emphasis upon the green ideals of sustainability and eco-friendly farming. As such, it serves regional and seasonal fare sourced locally. Holder of two Michelin stars since 2003, Villa Merton is renowned for innovative food created with unusual ingredients such as rowan berries, catfish liver or thistle oil. Dining here gives you not only a taste of the local region, but a new insight into culinary creativity.

An Indian-fusion restaurant, The Ivory Club markets itself as ‘contemporary colonial cuisine.’ It serves a wide range of variations on traditional dishes from the ‘Sword of Fire,’ a marinated beef skewer, to the ‘Booombastic Bombay Blast,’ which is a chicken curry with ginger. They also offer a number of steak dishes. The dark wood decor gives the feeling of a gentleman’s club to the interior, while the ornamental carved elephants’ heads reference the restaurant’s colonial theme.

There used to be a number of ‘apple-wine’ taverns in the Bornheim quarter of Frankfurt, but Apfelwein Solzer is now one of only a few that remain. Acquired by the Solzer family over a century ago, it continues to produce its own apple wine along with traditional Frankfurt specialties, including marinated hard cheese and the region’s famous ‘green sauce’ made with herbs and eggs. They offer sausages, dumplings, ribs and steak, all served with a jug of the eponymous ‘apfelwein.’ The tavern has been standing since the 16th century, but for warmer summer weather there is also an outdoor garden.

Restaurant, French, Seafood, European, $$$
Facebook
Email
Twitter
Pinterest
Copy link
Share
Map View
The critically acclaimed Restaurant Francais is located in the very center of Frankfurt. It is another Michelin-starred venue, specializing in French cuisine and especially noted for its fish and seafood dishes. Here they offer a full seven-course menu as well as a smaller five-course for those looking for the full gourmet dining experience. There is also seasonal seating in the winter garden or on the summer terrace. It is tastefully decorated in white and red, featuring floral wallpaper and large French windows that open onto the terrace. Their head chef, Patrick Bittner, has been Michelin-starred since 2008.
Open In Google Maps
Innenstadt I Frankfurt am Main, Hessen, 60311, Germany
+4969215118
Visit Website
Give us feedback
Give us feedback