The Top 10 Restaurants In Bremen, Germany

Bremen, Germany| ©Klim Levene/Flickr
Built along the banks of the Weser River, the North German city of Bremen is an architectural landmark, with a gorgeous town square and many iconic statues scattered around the city. Bremen has also been dubbed the ‘food capital’ of Northern Germany by the Michelin Guide, where fine dining establishments cross paths with laid-back haunts. From traditional Italian or French fare to local delicacies such as Labskaus, we profile ten of the best restaurants in Bremen.
Bremen, Germany ©Klim Levene/Flickr

This Kultkneipe was founded in Berlin in response to the fall of the Wall and the relocation of the German capital from Bonn. 50,000 people from the Rhineland flooded into Berlin and Ständige Vertretung, affectionately known as StäV, became their home away from home. Evidence of its political heritage is in its title, which in German refers to an institution that functions as an embassy in circumstances where an established embassy is not possible. StäV is testament to the political fractures of post-war Germany and is frequented by politicians to this day, offering the opportunity to journey through the country’s political past over a pint. Today, StäV has become as much a political institution as the Bundestag; books have been written about it, and its 10th anniversary was celebrated by Deutsche Welle in a short film. In Bremen, StäV continues to serve the ‘Rheinisch’ specialities that were designed to cater to its original customers including Kolsch beer and Himmel und Äd, a plate of black pudding with mashed potato, fried onions and apple sauce.

Dating back as far as the 1400s, this building is the oldest and last of its kind in Bremen. Originally a townhouse, it was rebuilt in the Gothic style around the turn of the 16th century, and it derives its name, ‘Spitzen Gebel‘, from a type of late Gothic gabling. This building stands just behind the main square in Bremen and is now home to a public house famous for serving Sluk ut de Lamp, translated as ‘swig from the lamp.’ This tradition can be traced to the time when the house served as the headquarters for the music group, Vereinigten Klavierträger. To conceal the fact that they were drinking at work, the piano men used to drink from a copper lamp. Distilled from a Swedish recipe that dates back hundreds of years and is served in Spitzen Gebel to this day, this unique brand of Schnapps is perhaps more novel than nice.

Restaurant, German, European, $$$
Add to Plan
Located in the center of the old town, the Bremer Ratskeller is over 600 years old. Originally a wine cellar, it was used by the Council of Bremen to store white wine in the days when it controlled its supply within the city. Today it houses a large underground restaurant directly beneath the town hall. The oversized wine vats that run the length of the room attest to the restaurant’s history. It is still home to the oldest wine barrel in Germany, laid down in 1653, as well as more than 600 other varieties of exclusively German wine.
More Info
Open In Google Maps
Am Markt, Mitte Bremen, Bremen, 28195, Germany
+49421321676
Visit website

Bar, Beer, German
Add to Plan
Cleverly crafted cocktails | ©Quickcapture/Flickr
In a town that is famous for the Grimm Brothers’ tale about a group of travelling musicians, it is only fitting to enjoy an evening at Musical Theater Bremen. Situated on the edge of the old town, the theatre seats 1400 and houses Henry’s Bar, which also functions as an art gallery. Here, guests can enjoy a cocktail while admiring the artwork which hangs from every wall. Over the years, Henry’s has played host to Mikhail Gorbachev, Ai Weiwei, and the German band Silbermond among others, demonstrating the variety and interest of its clientele.
More Info
Open In Google Maps
7 Richtweg, Mitte Bremen, Bremen, 28195, Germany
+494219888500
Visit website

On the East bank of the Weser River is the Scharfrichter Lounge, which serves over 100 varieties of the famed German Currywurst. Graded according to spice, there are ten different levels of heat and the sausages have names such as ‘Burning Baboon,’ ‘Die Hard,’ and ‘Six Feet Under.’ Currywurst has become a German specialty, referred to as ‘Das Steak des kleinen Mannes,’ ‘the little man’s steak,’ and is sold all over the county but nowhere in quite such variety as here. ‘Scharfrichter,’ from which the restaurant’s name derives, refers to a tradition of German executioners. Some of the sausages here are designed to be deathly spicy. 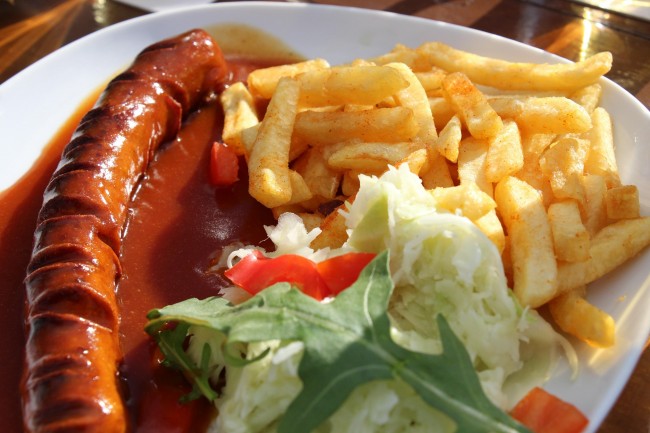 Bistro, Cafe, Restaurant, German, European, $$$
Add to Plan
The windmill is as much a symbol of Northern Germany as it is of its neighboring Holland. The Kaffeemühle restaurant is testament to this. It stands overlooking the water in Wallanlagen Park and has seating outside for the summer as well as space to eat inside the windmill itself. Originally used to grind flour, the windmill has been relocated and rebuilt a number of times due to fire and other catastrophes damaging it. Today it only grinds coffee to serve to the customers who fill its tables, hence its name, ‘the coffee mill.’ The venue is ideal for a late morning break from sightseeing.
More Info
Open In Google Maps
212 Am Wall, Mitte Bremen, Bremen, 28195, Germany
+4942114466
Visit website

Situated in the heart of the old town, Schröters is set up as a network of smaller rooms rather than a large dining area. Whether one dines in the wine cellar or next to the open air kitchen, Schröters offers an intimate and personal feel for a private dinner. Upstairs there is also a Toulouse-Lautrec room decorated with reproductions of the artist’s work. The menu features delicacies from various European cultures, from Italian risotto to the classic Wiener Schnitzel and can be enjoyed in the summer garden under the lights.

Bar, Restaurant, German
Add to Plan
Spaghetti Carbonara | ©Pixabay
Dinner aboard this floating restaurant provides the most scenic possible views of the Weser River, which runs through the center of Bremen before emptying into the North Sea. The twist is, Theaterschiff is also a floating theater, where plays are performed several times a week. Anchored near the Wilhelm Kaiser Bridge, the impressive Theaterschiff’s restaurant section features floor length windows and ambient lighting that provide the perfect evening atmosphere. The menu is international, ranging from steak to spaghetti and there is also a fantastic bar on board. There is no better way to see the city a little differently than to dine on the river.
More Info
Open In Google Maps
4 Anleger, Mitte Bremen, Bremen, 28195, Germany
+494217908600
Visit website

Restaurant, German
Add to Plan
Labskaus | ©Pixabay
Concordenhaus is located in an historic 17th century townhouse, rescued from decay in the 20th century and restored as a guesthouse. It specializes in local dishes from around the Bremen region and North Germany. These include Knipp, a fatty sausage made from groats and pork browned in a frying pan, and Labskaus, which consists of corned beef, herring, onion and beetroot. Set in the Schnoor quarter, the restaurant has a charming red brick façade and large historic dining room.
More Info
Open In Google Maps
2 Hinter der Holzpforte, Mitte Bremen, Bremen, 28195, Germany
Visit website

This Parisian-style bistro is something of a gem in the city. Although the menu is a little pricey, it is well worth a visit for the fantastic locally sourced food and friendly staff. Grashoff’s also organizes a number of evening events from live bands to themed menus to wine tastings. For those who are especially enamored Northern German cuisine, there is a delicatessen and gourmet shop offering treats for takeaway.