The Best Things To Do in Berlin
Palace in the garden of Sanssouci Park, Potsdam, Berlin | © Elisa Locci / Alamy Stock Photo
Berlin / See & Do

The Best Things To Do in Berlin

Berlin has it all – history, art and vibrant nightlife all vie for the attention of the city’s visitors. But when you’re short on time and don’t want to get caught up in the tourist traps, the choice of things to do in Berlin can be overwhelming.

Admire views over the city from a hidden rooftop bar

For amazing views of the city, pass on the TV Tower – inevitably flooded with tourists – and head to the Klunkerkranich rooftop bar in Neukölln instead. When you manage to find the somewhat well-hidden bar, which is hidden behind the top-floor car park of the Neukölln Arcaden (take the lift to floor five and walk straight through the car park until you reach a spiralling driveway up to the bar), you will be rewarded with an al fresco oasis complete with disco balls, vibrant flowers and a sandpit. It’s the perfect lookout point from which to admire the sunset over the city’s skyline (including the TV Tower) as you enjoy a cocktail or two. 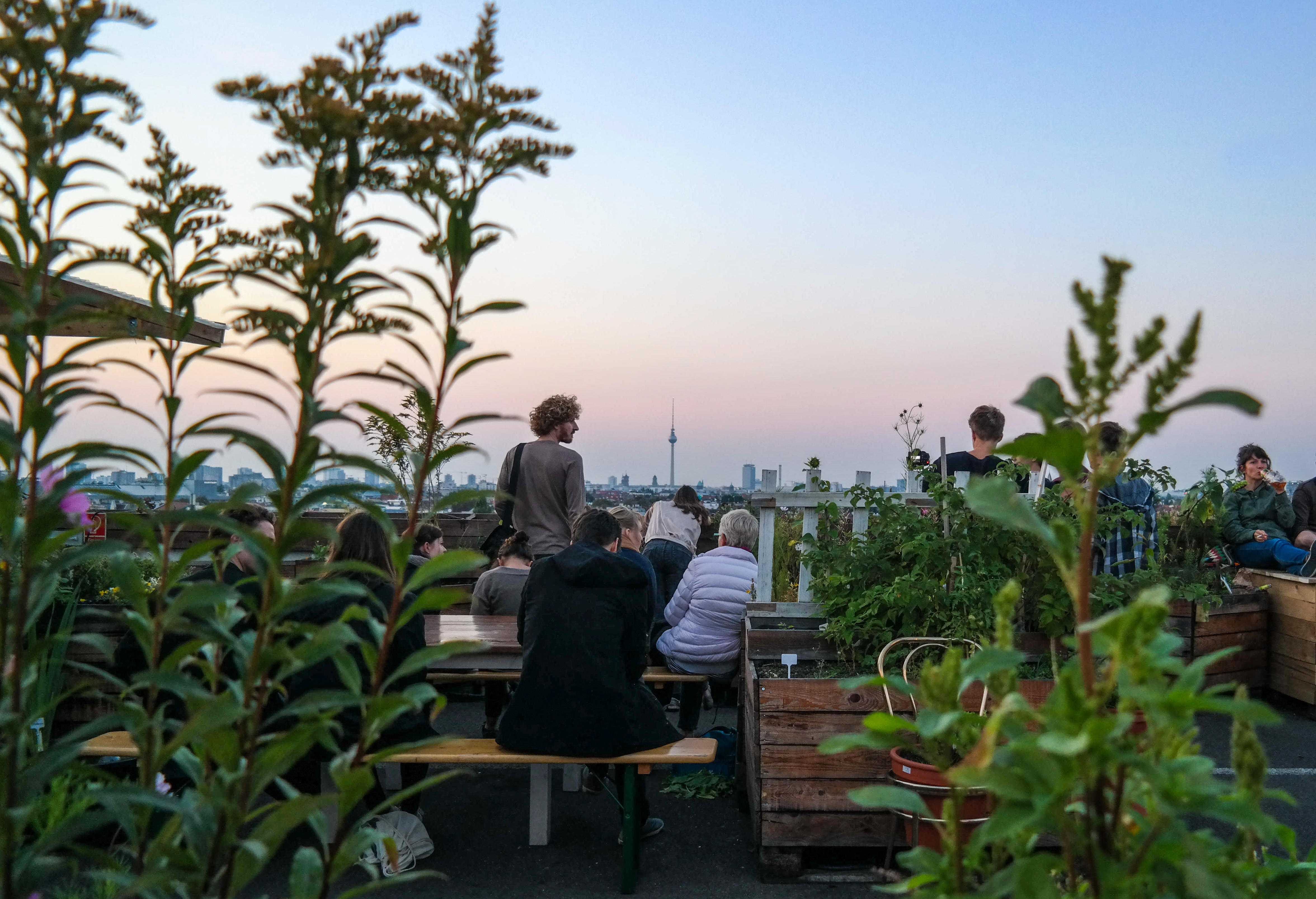 Dance the night (or the entire weekend) away

Experiencing Berlin’s nightlife is a rite of passage for any visitor to the city. The clubs here stay open over the entire weekend, and their strict door policies are something of an urban legend: fickle bouncers guard their doors fiercely, with a particular penchant for turning away large groups, tourists and anyone having a little too much drink-fuelled fun in the queue. You might want to think carefully about where to go before you head straight to the infamously hedonistic Berghain and get turned away after waiting in a queue for two hours. Try Kater Blau for a wacky, colourful mix of disco, techno, drag karaoke and an open-air mini-beach by the river. Just here for the hardcore techno? Head to Griessmuehle for pumping music in a former factory building that has maintained its industrial feel. 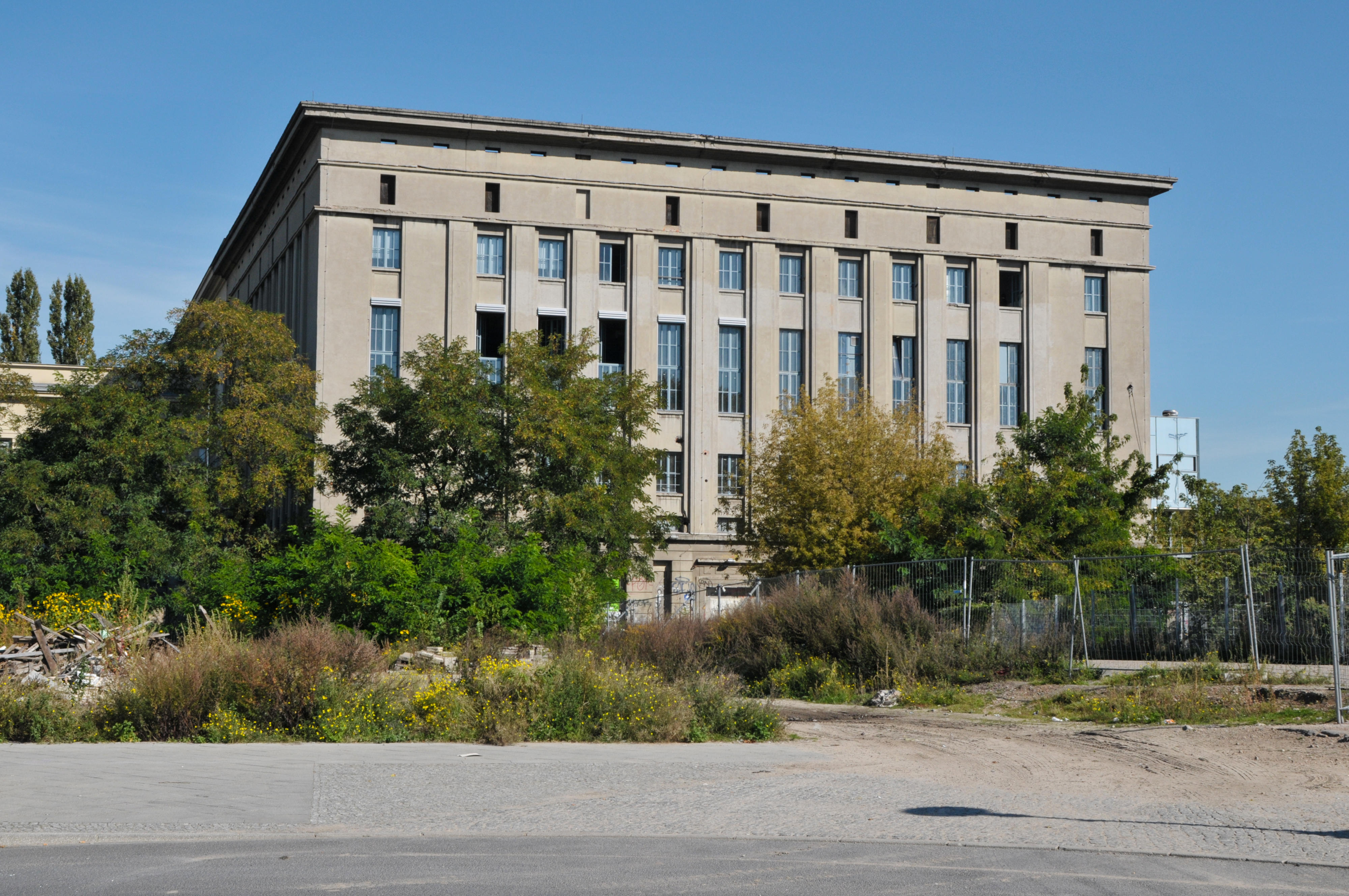 Soak up the city’s history at unique museums

The history of Berlin is still palpable today, thanks to an array of fascinating museums and remnants of the city’s tumultuous history dating back to the Weimar Republic, Nazi Germany and the Cold War. These include Checkpoint Charlie, the best-known Berlin Wall crossing point between East Berlin and West Berlin during the Cold War; the Neoclassical Brandenburg Gate, which has become a poignant symbol of Germany’s reunification; and the East Side Gallery, the longest-remaining (and art-adorned) stretch of the Berlin Wall. For an authentic and immersive insight into life in the capital during World War II, Berliner Unterwelten offer tours through the city’s underground tunnels and bunkers, while you can learn more about divided Berlin under Soviet control at the Stasi Museum in Lichtenberg, housed in a former Soviet prison. Lastly, don’t miss the world-famous Jewish Museum for a poignant exhibition in memory of the Holocaust, as well as an eclectic collection of artefacts and memoirs about Jewish culture. 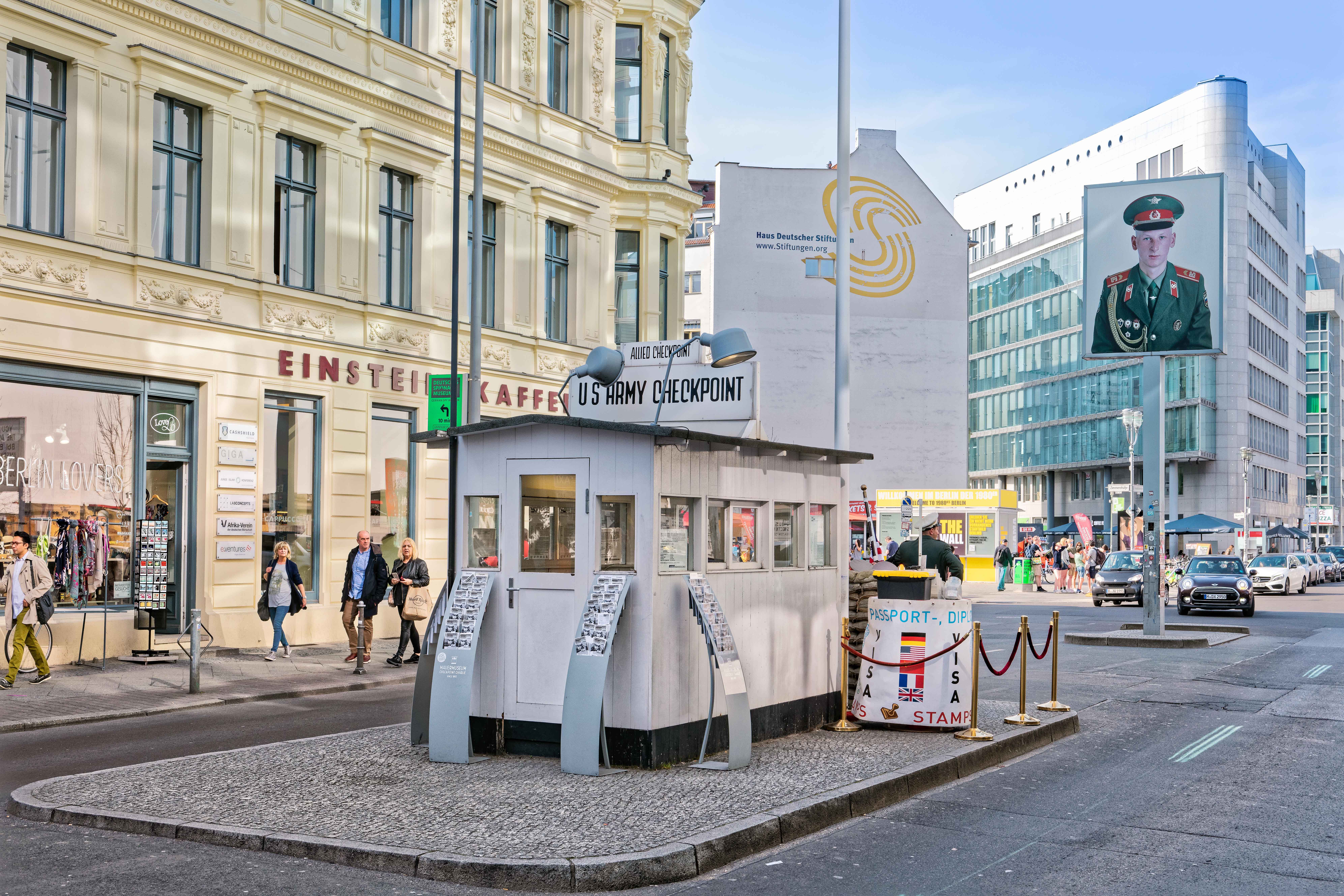 Bag a bargain and find vintage gems at a flea market

Going to a Berlin Flohmarkt (flea market) is something of an adventure. Take the time to hunt through a mountain of second-hand clothes, collectables and handmade crafts and you are guaranteed a bargain. Into antiques? Practise your haggling skills at Berlin’s original flea market just beside the Tiergarten S-bahn station. Is vintage clothing more your thing? Prinzessinnengärten has some great clothing stalls, while Neukölln’s hippest residents sell their wares at Muehlenmarkt. And for a bit of everything, head to Mauerpark, where you can watch street artists and sing your heart out at an outdoor karaoke session. 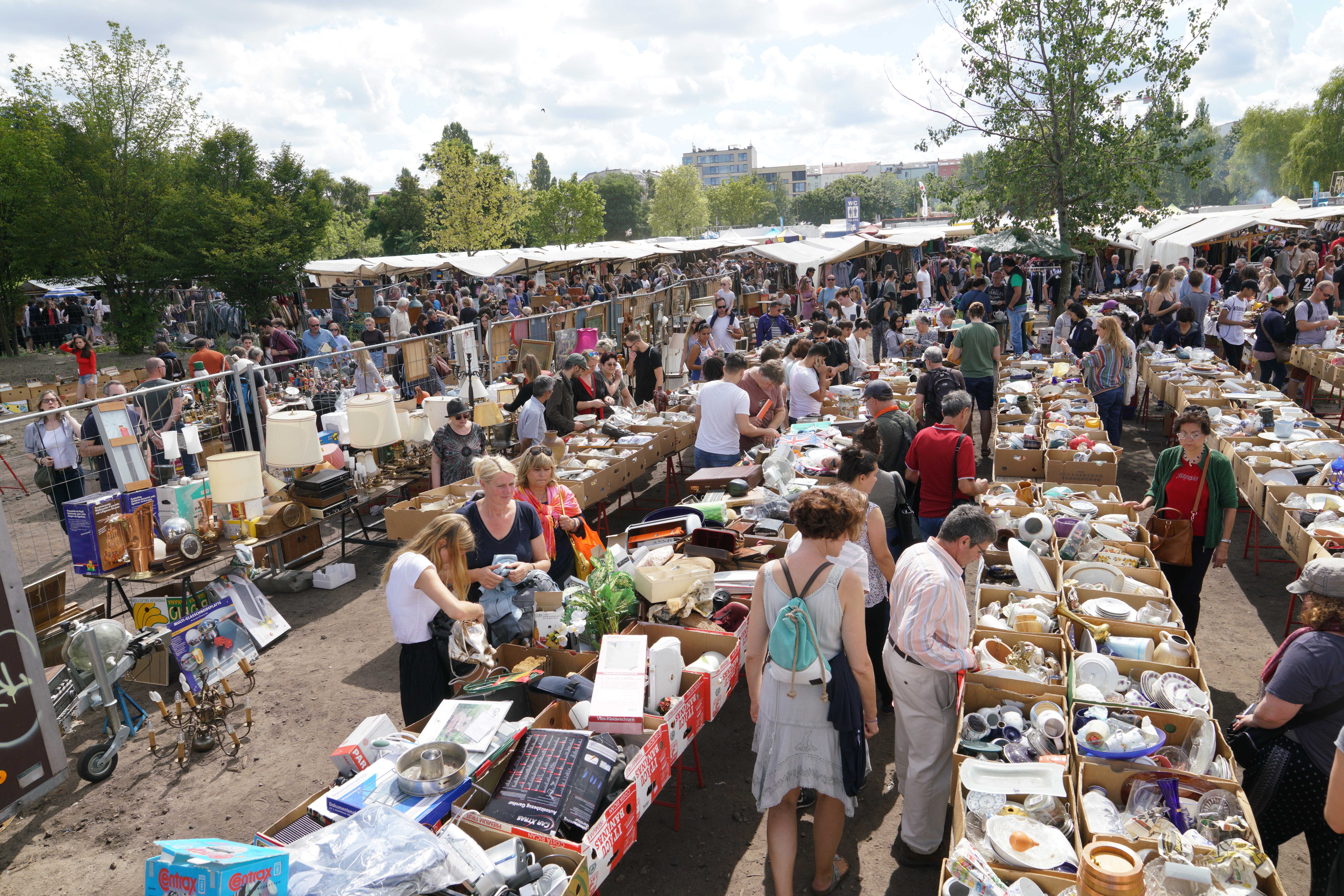 Take to the streets to experience Berlin’s urban art

If you are looking for a hit of high culture, the Gemäldegalerie houses one of the world’s leading collections of European paintings from the 13th to the 18th centuries, while those more into modern art will want to check out the collections at Hamburger Bahnhof and KW Institute. But while the city has an exceptional array of galleries, Berlin’s art scene is by no means confined to interior spaces: Berlin is a living, breathing canvas in itself. Just take a walk around the streets of Kreuzberg or Prenzlauerberg to find large-scale murals, provocative political statements and Art Deco portraits from famed artists such as Mein Lieber Prost, Blu, XOOOOX and SOBR – famed for his ‘It’s time to dance’ series. Look out for this mural series of partygoers dancing in a cloud of glitter – once you see it, you’ll start to notice them on walls all around the city. 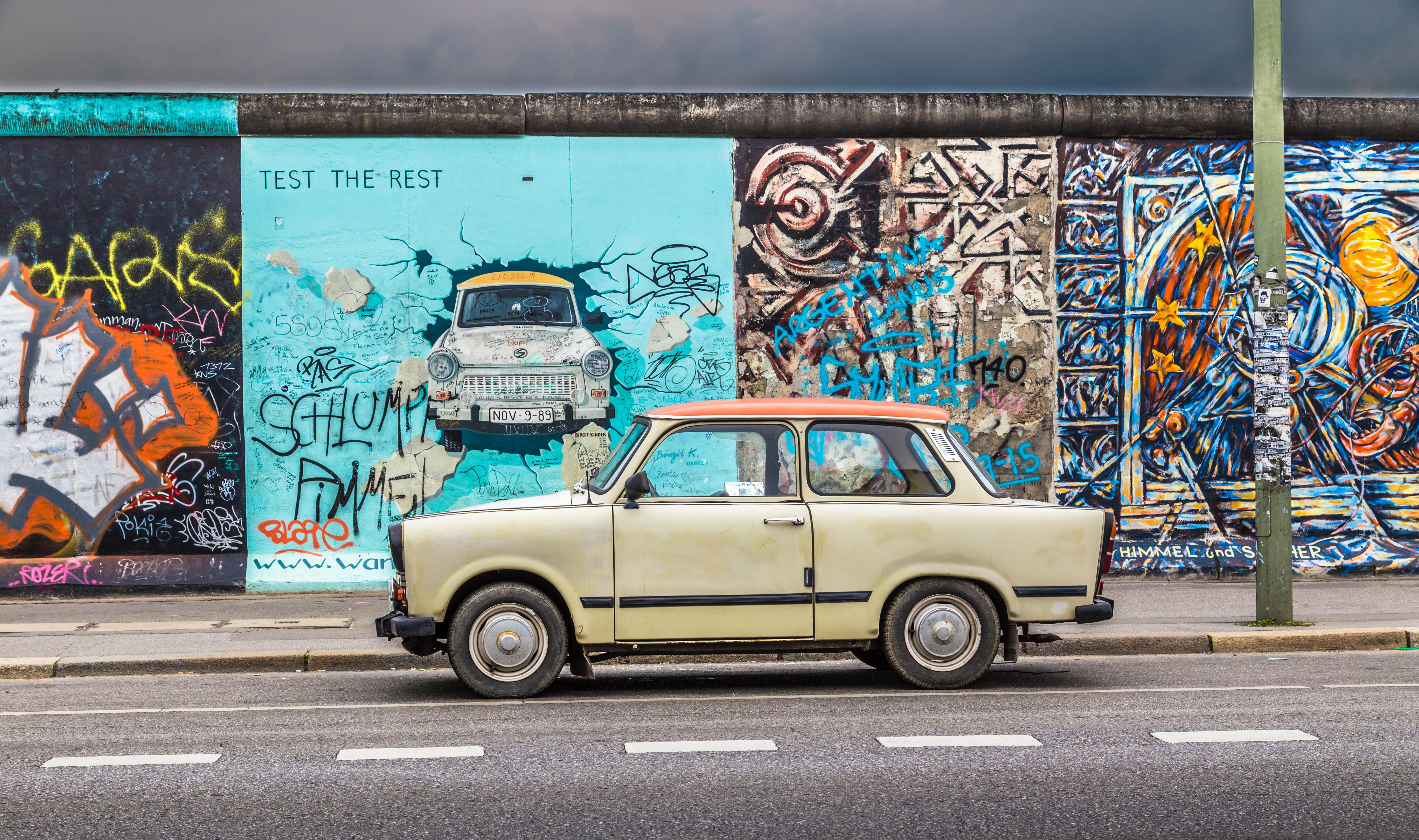 Leave the schnitzel and strudel to Bavaria – Berlin’s multicultural population is echoed in its eclectic food scene, with the best foodie spots a little way from the tourist centre. Share some Middle Eastern platters full to the brim with fresh falafel, hummus and shawarma at Azzam in Neukölln; try a selection of freshly baked Italian pizzas for under €10 at Stranero in Wedding; and sample authentic Vietnamese food at Fam Dang on Huttenstrasse in Moabit – notably the crispy duck and tofu satay. Friedrichshain is a haven for any connoisseurs of vegan cuisine, with Vöner and 1990 Vegan Living among the best. In terms of fast food, the famous Currywurst and doner kebab are also Berlin institutions, and you’re never too far from a stall if you fancy a quick bite. 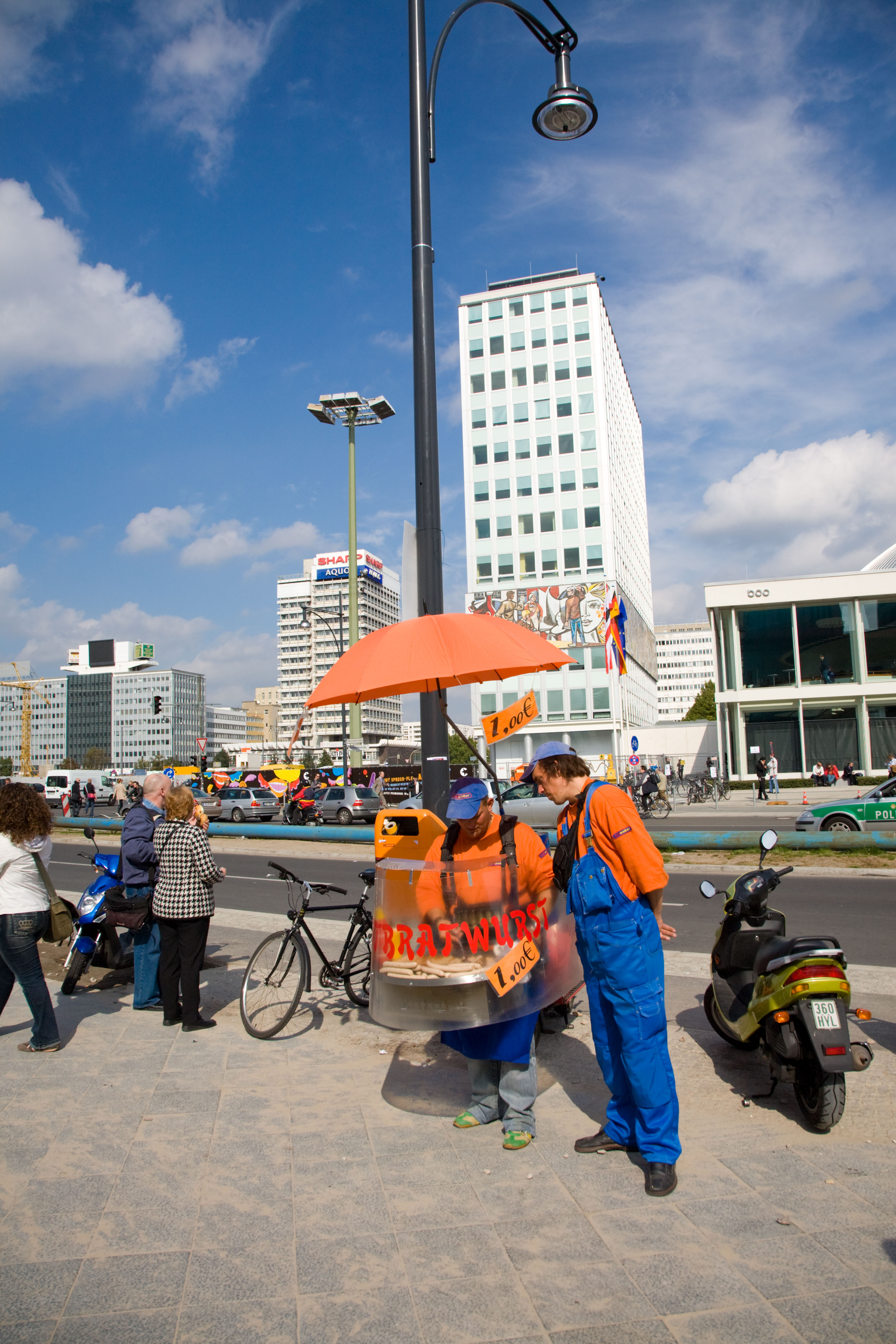 Swap the pub for Späti

When the weather is good, make like a real Berliner and get yourself a beer to enjoy outdoors. Spätis are independent kiosks that you’ll find on every street, and are open virtually 24/7. Some of the best spots to enjoy a Späti beer are Treptower Park, Monbijou Park and Landswehrkanal. Späti crawls are of course also an option, and far kinder to your wallet than a lengthy bar crawl. 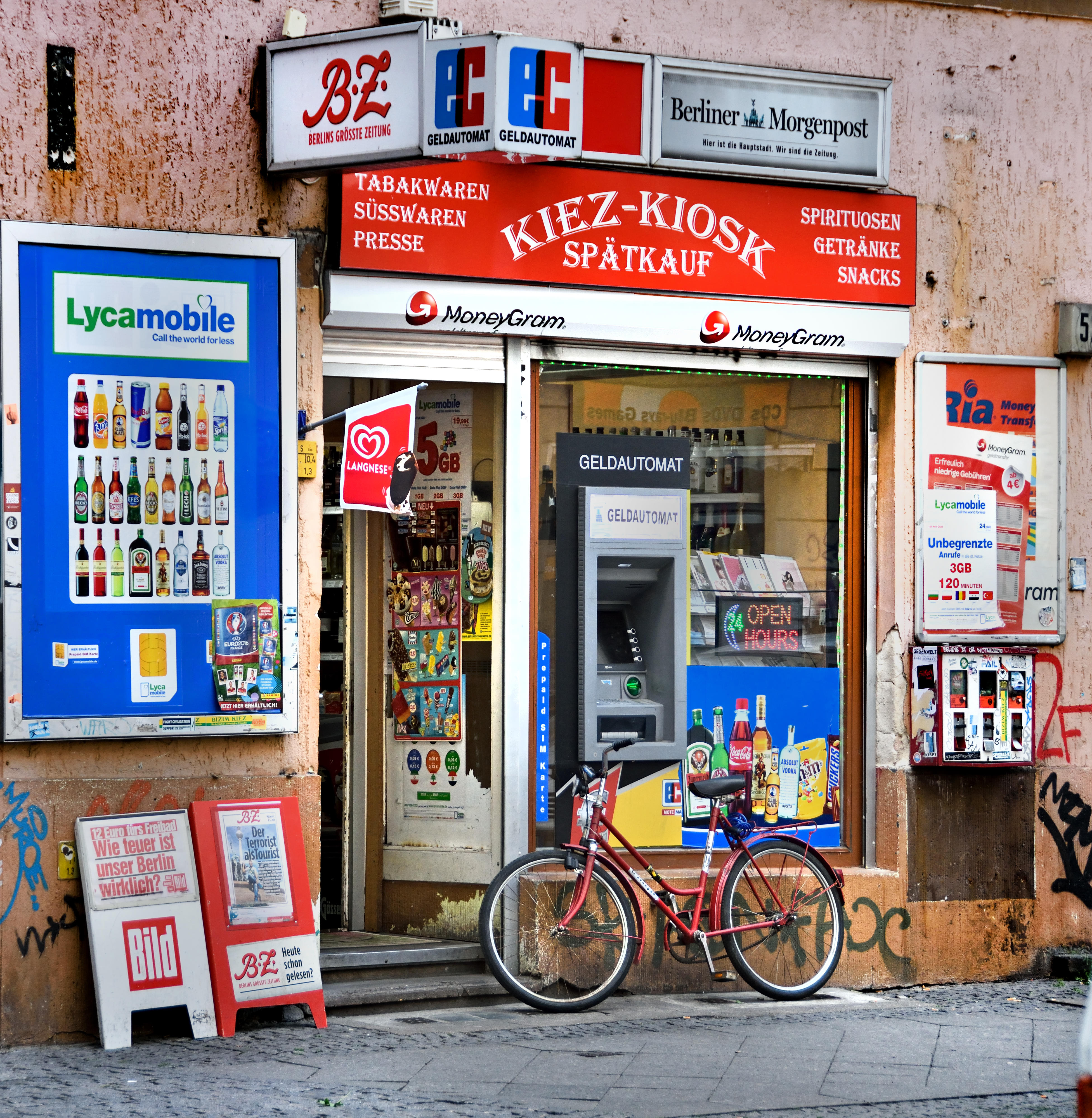 Cycle around a former airfield

Tempelhofer Feld marks the site of a former military airport and parade ground. Since the airport closed in 2008, its runways and surrounding areas have become a beloved public park. Here you can dine al fresco in the spacious picnic and barbecue areas, or put the former runways to good use rollerblading or skateboarding – all in the shadow of the monumental hangars and terminal building, which are open to the public for tours. Cyclists will revel in the huge open space on offer here – hire a bike at Rent a Bike 44 for €4 and enjoy the six-kilometre (four-mile) cycling trail. 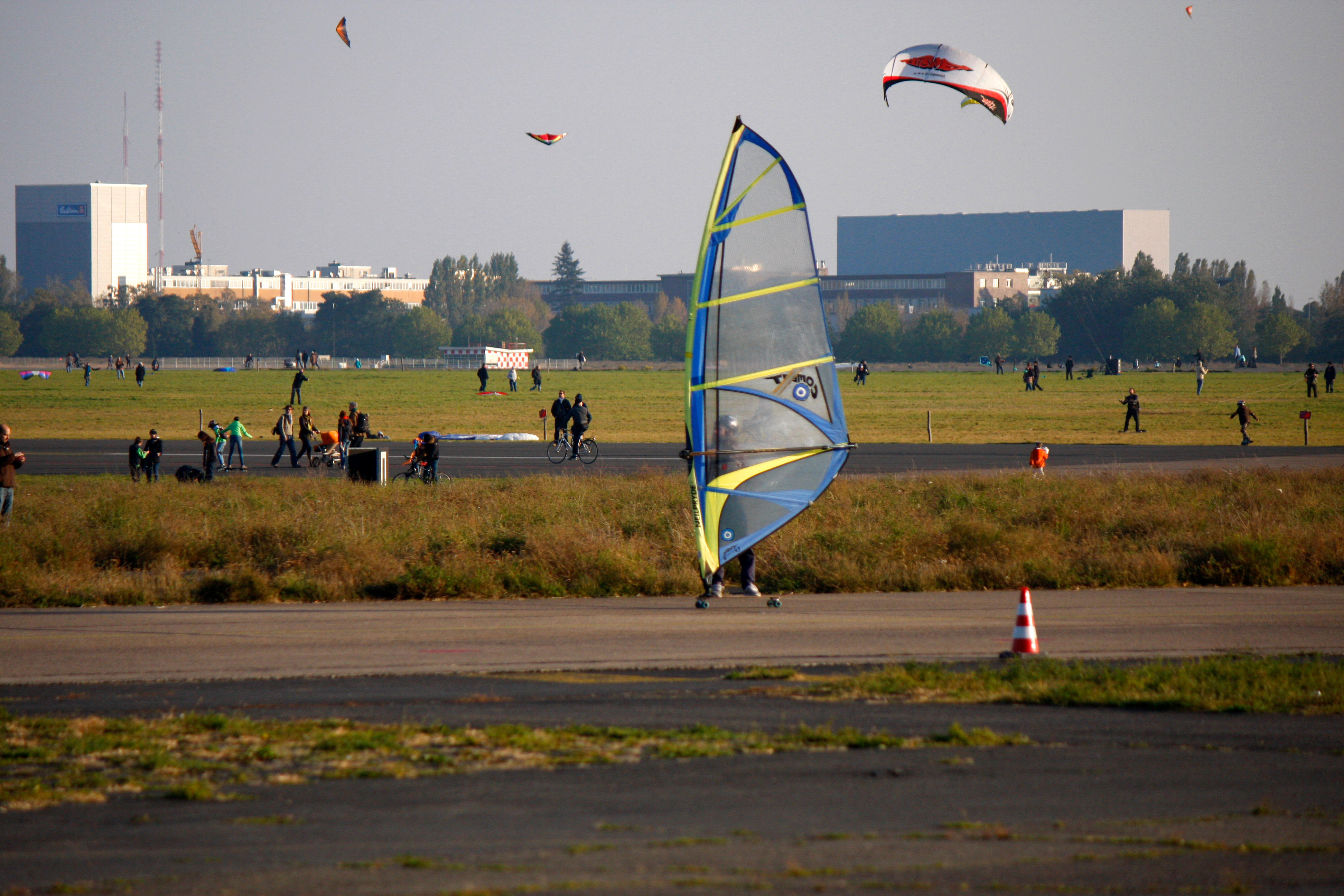 Tour royal palaces in nearby Potsdam

If you feel like taking things a bit more slowly, take the train to Potsdam. Just half an hour from Berlin’s centre, Potsdam’s Rococo and Baroque-style palaces give the impression that you are stepping into a fairy tale. Potsdam was home to the Prussian kings and the German kaiser until 1918, and as such is the site of many grand palaces, castles and historical monuments. A short walk from the station through the quaint centre will lead you to Sanssouci Park, the largest World Heritage Site in Germany, which holds several royal residences that are open to the public. 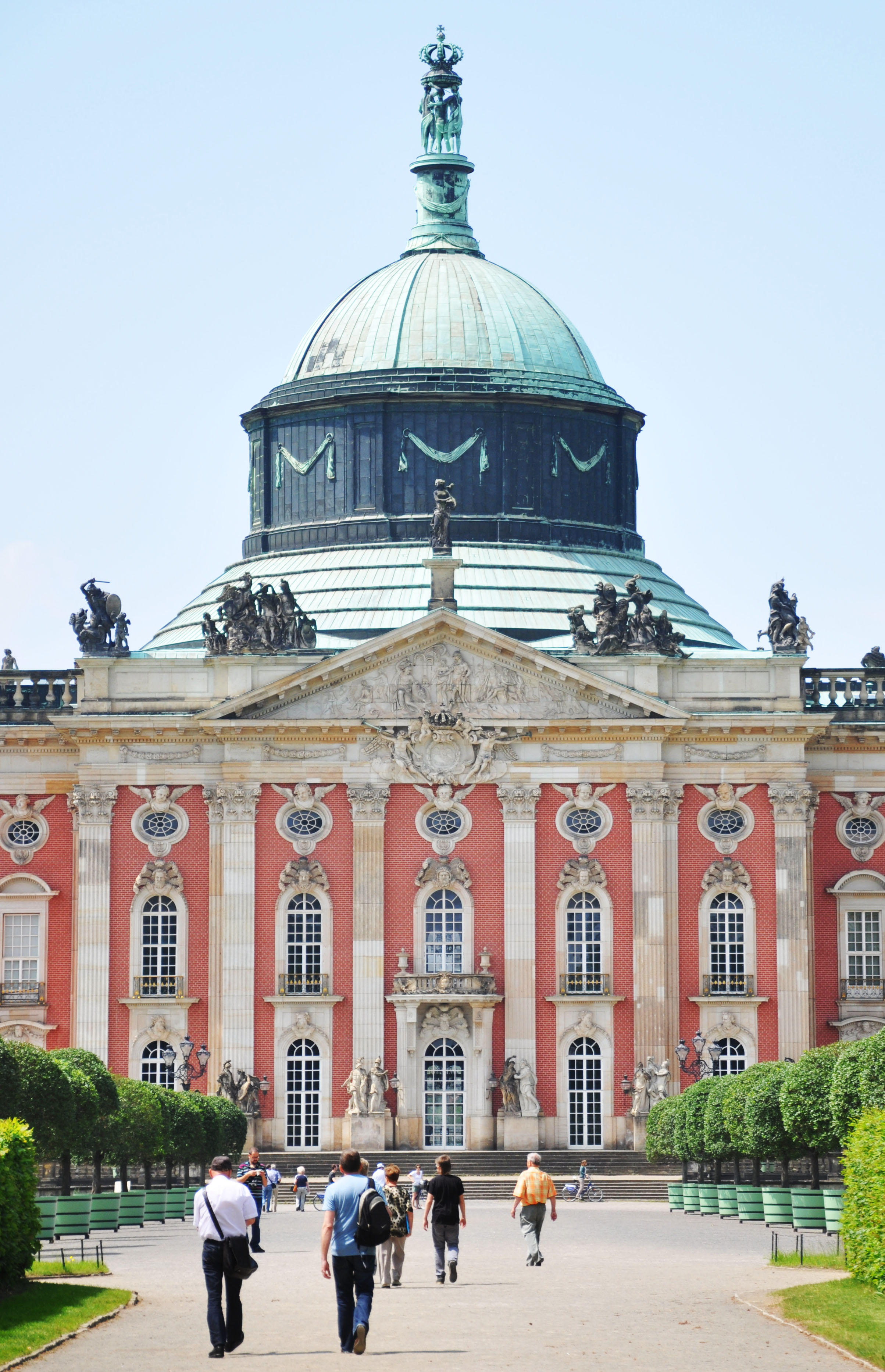