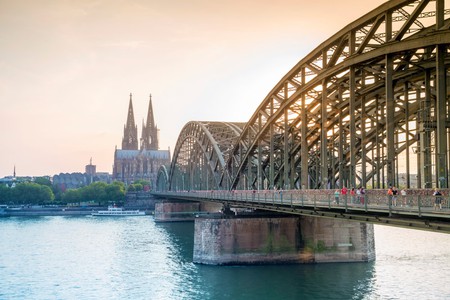 Cologne clasps to both sides of the Rhine River, and seven bridges connect its neighbourhoods with one another. A walk across all seven of them does not only take you past some of the major sights, but also offers scenic views not many tourists get to see. Follow us on a tour of Cologne’s seven bridges.

In the 4th century, the Romans constructed the first bridge that connected Cologne with the ‘Divitia’ military post on the eastern riverbank. But rather than allowing travellers and merchants to cross, the bridge was solely used to secure the city borders and to demonstrate the Romans’ superiority over the Germanic tribes of the region. The bridge was eventually destroyed in the 10th century, and it wasn’t until 1859 that a new permanent bridge was inaugurated. Today, seven bridges span across the Rhine river and connect Cologne’s neighbourhoods on the west and east side of the river with one another.

An 18-kilometre-long (11 mi.) zig-zag walk across all of the seven bridges takes you from the up-and-coming centre of Mülheim past numerous sights and scenic spots all the way southwards to Rodenkirchen on the other riverside. 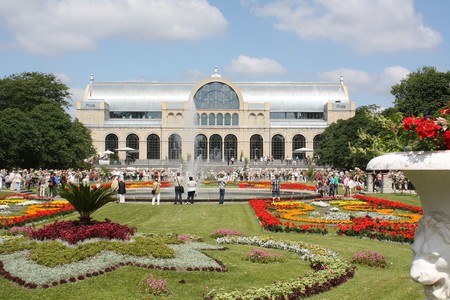 Pedestrians, cars and trams cross Mülheim Bridge, which connects Wiener Platz at the heart of Mülheim with the lush part or Riehl. When construction began in 1927, Mülheim bridge was to be Europe’s largest suspension bridge. The city mayor at the time, Konrad Adenauer, inaugurated the bridge two years later, but a 1944 bomb raid destroyed the ambitious project. In 1951, it was once again Adenauer, now serving as the first Chancellor of the Federal Republic of Germany who inaugurated the newly built bridge.

Once you cross the bridge, the route takes you through the Riehl meadows along the river until you reach Zoobrücke. This box girder bridge is the widest one – six car lanes plus a pedestrianised strip on each side take people across the river, and the Cologne cable car carriages dangle above. A quick glance to your right as you cross gives you stunning panoramic views of Cologne’s landmarks. Back on the eastern riverside, you’ll pass several attractions that are worth stopping at, including the Flora and Botanical Gardens, the Jugendpark with its outdoor sports facilities and skate park, and one of the city’s best spa and wellness centres, Claudius Therme. 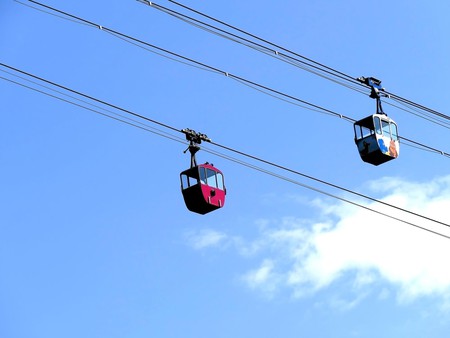 Follow the Rhinepark for more views of Cologne’s skyline past the Tanzbrunnen venue and the Rheinterrassen restaurant – if you’re hungry, that’d be a great spot to grab lunch and kick back in one of their canopied beach chairs. Ahead is Cologne’s most iconic bridge. Hohenzollern Bridge is not only known for the postcard-perfect views you have of Cologne Cathedral from here, but also the thousands and thousands of engraved padlocks that loved-up couples have attached to its railings and spruced the nickname Love Lock Bridge. A walk across takes you to the heart of Cologne’s city centre and its major sights. It’s worth spending some time exploring some of the highlights Cologne has to offer including a peek inside the imposing Gothic Cathedral and its crypt and treasure or even a walk up to the viewing platform at the top.

Stroll through the cobblestoned Old Town and past the many traditional brew houses, speciality shops and the historical and colourful houses at Martinswinkel on your way to Heumarkt, the market square that sees the annual opening ceremony of Cologne’s Carnival. Ahead of you is Deutz Bridge, a green concrete bridge that was built right after the Second World War and connects Cologne’s centre with the Deutz neighbourhood. The bridge features several large hollows that are often used for art exhibitions, events and installations. German actress and artist Elke Koska even called one of the hollow pillars her home for three years.

The walk along the right riverbank grants more skyline vistas until you reach Severins Bridge, which takes you back across the river and towards Cologne’s Chocolate Museum on one side and the Rheinau Harbour complex on the other. The Rheinauhafen is an urban regeneration project that features upscale apartment complexes, office buildings, bars, restaurant and shops and stretches all the way to the South Bridge. 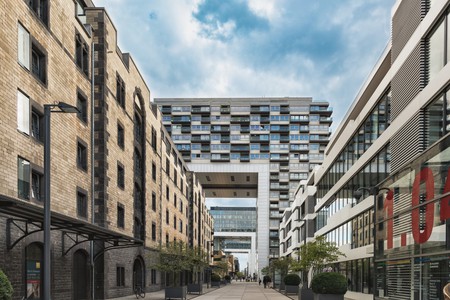 Bridge number six of our journey was first built between 1906 and 1910, but like others fell victim to World War II bombing raids; it was fully reconstructed by 1950. Our stroll across the brick-and-steel construction takes us to the Poll Meadows. In the summer months, people flock here to escape the inner-city buzz with riverside picnics, BBQs and football games. Looking back, you have unobstructed views of the iconic Kranhäuser buildings at the Rheinauhafen you passed earlier. 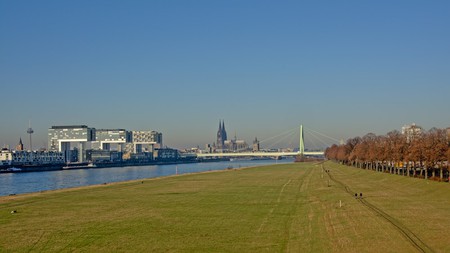 We’re nearing the end of the tour and approaching Rodenkirchen Bridge. When it opened in 1941, the bridge was the first Autobahn bridge across the Rhine River. But just like the others, Rodenkirchen Bridge was destroyed in the Second World War and only rebuilt in 1954. Rodenkirchen itself is a picturesque neighbourhood with beaches, small shops and boutiques, restaurants and cafés that are a perfect place to grab a drink or dinner at after your exploration.