Bad Dürkheim's Wurstmarkt: What to Know About the World's Largest Wine Festival 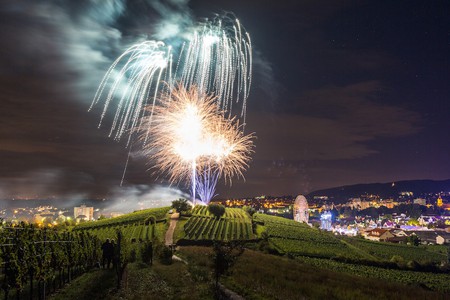 Bad Düerkheim is to wine, what Munich is to beer. Once a year, the placid spa town sees more than half a million people rush into town for the world’s largest wine festival. Toasting with countless glasses of the best Rieslings, Pinot Noirs and Sekts the region has to offer, visitors enjoy two long weekends full of music and entertainment. Here’s what you need to know.

When and where is it?

Every year, the Wurstmarkt wine festival is scheduled for the second and third weekend of September. This year, the festivities happen from the 7th to the 11th and then again a week later from the 14th to 17th of September. Bad Duerkheim is situated in the Palatinate region of Germany, about 45 kilometres west of Heidelberg and 110 kilometres south of Frankfurt. 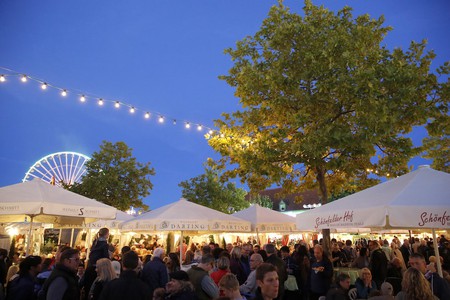 Wine is the centre of attention here, obviously, and guests can indulge in local wine at several locations across the festival. Just like Munich’s Oktoberfest, Bad Dürkheim sees a bunch of festive tents move onto the market plaza – one notable difference is: there’s no cover charge. The three Wurstmarkt tents put on a programme of live music and entertainment, serving regional culinary specialities and wine from all over the country. The so-called Schubkarchstände take the party outside where friends and strangers squeeze up on wooden benches to clink their half-litre goblets together. Those who are not necessarily a fan of boisterous folk festivals can retreat to the somewhat upscale wine village to drink their Riesling or vintner’s sparkling wine from real wine glasses. In total, you can sample more than 3,000 different wines – an impossible mission, but you can but try! 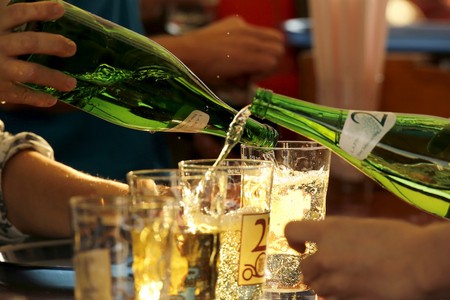 Drinking set aside, you’ll have all day to get on the head-spinning fairground rides, try to win big with the daily tombola or enjoy the best views from the Ferris wheel. The Wurstmarkt festival is filled with all kinds of fun events and activities, starting with the official opening ceremony on the first Friday through to the blazing farewell-fireworks on the last day. If you’re there for the first Monday, get up early and head to the main stage for the Literarischer Frühschoppen event, a boozy early morning get-together with music and poetry performances. Later that day sees the coronation of the annual wine princess.

A quick round-up of the festival’s history

Since the middle of the 12th century, the nearby Michaelsberg has been clad in vines making it the oldest vineyard site in the Palatinate region. Annual September pilgrimages to the hilltop chapel made the vineyard known across the region and the market which accompanied the event quickly grew in size. By the 15th century, the markets had moved to today’s meadows and from here expanded from being a sober consecration fest to a regional trade show for wine and agriculture.

It didn’t take long for the business focus to morph into an exuberant folk festival known more for its impressive consumption of wine and sausages – hence the name Wurstmarkt, which translates to sausage festival. Bad Duerkheim wouldn’t be the same without the rackety festival, and a fixed date was eventually established, five days weren’t enough, so it was extended to six, then seven and finally a whole nine days in 1985.

The primary decision to be made before you go is where you want to stay. Bad Duerkheim is a town of fewer than 20,000 people, and accommodation options are therefore limited, but the excellent public transport system makes the festival easily accessible from nearby cities and villages. Mannheim, Heidelberg, Speyer and Kaiserslautern all offer a range of hostels, B&Bs and hotels and are great to use as a base if you want to see more of Germany than just the festival. Check the Deutsche Bahn website for public transport tickets and the best route on your travel dates. Prices to and from Heidelberg or Mannheim are usually around €17 one way, while tickets from Frankfurt cost around €25 for the fastest connection. 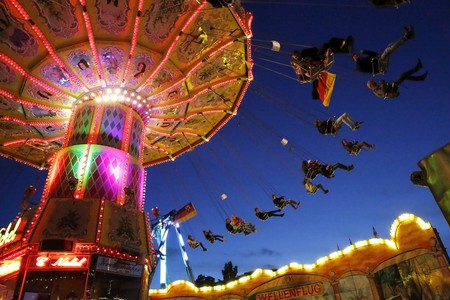