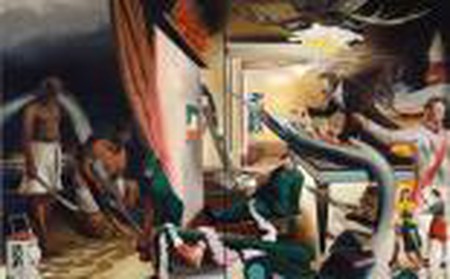 During 2013 the BOZAR in Brussels, Belgium, displayed the work of the German surrealist artist Neo Rauch in the exhibition Neo Rauch The Obsession of the Demiurge. Harald Kunde, the curator of exhibition, offers his expert insight into some of Rauch’s pieces, allowing for a deeper appreciation of this great artist’s work.

The exhibition of the Leipzig artist Neo Rauch (b. 1960) at the BOZAR comprises of forty large-format paintings and a group of exemplary drawings. It provides deep insights into a fascinating contemporary oeuvre by presenting key phases of its development from 1993 to 2012, traced in a reversed chronological arrangement.

On first sight, the paintings appear enigmatic, hermetically self-contained, and untimely in a strange way. Surrealist narrative strategies that treat the realms of dream and the unconscious create a visual explosion. The figures depicted seem to come straight out of old books rather than from actual everyday life; their tendency to appear in historical costume additionally torpedoes any linear chronology and lends many of the works the character of time machines caught in an endless loop. The pictorial spaces closely staggered one behind the other, the strong allegorical charge of the stagelike tableaux ensure that these paintings by no means lend themselves to be easily understood. But upon a closer look, what comes out is a sense of deep insecurity, with regard to the state of the world in general and the unchanging inner human condition in particular, our oscillation between the poles of the divine and the animal, our basic aptitude to be perpetrator and victim equally. It is the existential experience of the upheaval of socio-cultural systems that underlies Rauch’s imagery and lends its relevance and currency beyond the zeitgeist and far beyond its East/West German background. 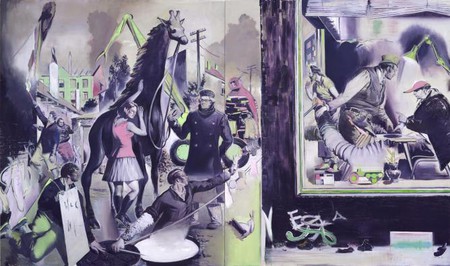 The left side is dominated by a giraffe standing entirely out of place in surroundings of busy activity. In the background a house is being demolished, and in front of it, a torch bearer illuminates the darkness of a stage; still more in the foreground, a stumbling and a climbing figure embodies their respective fates. Yet there are two figures who stand in direct relation to the tall animal: a girl putting her hands comfortingly around its neck and a strict animal tamer gripping the reins, intent on domesticating the giraffe. These competing approaches to taming are taken up in the right half of the picture and mirrored in a boxy hut, where an interrogation is apparently underway. Even in a rural environment like this one, the quaking caused by imminent unrest is felt on every level. The resulting insecurity and the collective tendency to find a scapegoat — even if it happens to be a giraffe — underlie the entire scene, and with them the pattern of a challenge-and-coping strategy that is by no means only German. Who will ultimately emerge as the victor from this tumult and whether the alien will ever find a place in the community emerging here, remains of course open. 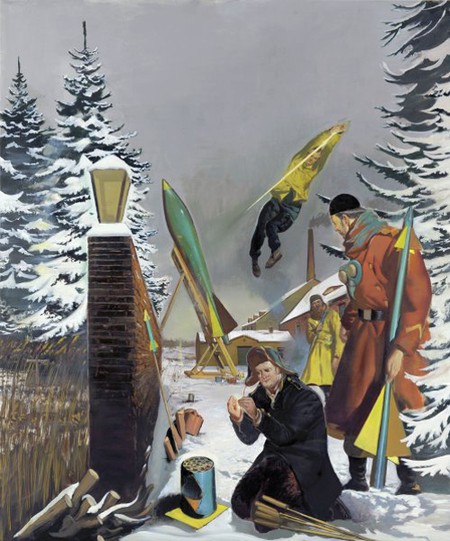 We find figures who are on the threshold between military habitus and fool’s cap. They conform to the type of exhausted and disillusioned hero who has become the essence of the postmodern sense of life. With childish expectation, the figures manipulate fireworks which at any time might change into live ammunition and, together with the flying bomb in the background, lend the scene a latent threat. From there, the artist moves from his workplace at the easel into the foreground of the narrative, changing levels of reality that are typical of his practice. 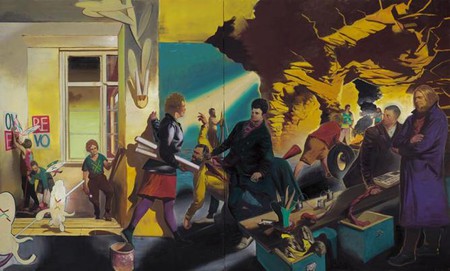 This painting features an unbroken parade of highly diverse protagonists, who seem to glide through the pictorial space as if on an assembly line, while remaining in autistic isolation. Each one pursues his own agenda, which has nothing in common with that of the others, ultimately turning the runway into a stage for actors impersonating themselves. Only the children in the stairwell at the left are ready for common action. Their pasted “Revo” slogans apparently recall the remnants of a former revolutionary pathos. The rebellion has retreated into the costume room of history; what remains is business-as-usual role playing. 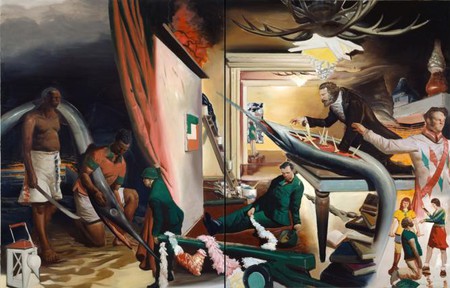 The exotic natural realm of the South Pacific islands collides with a European societal realm full of concise references, as the dividing wall first mutates into a curtain and then dissolves entirely. A world-encompassing simultaneity of parallel events is evoked, corresponding to current global interdependency and seemingly contradicting the flat continuum of a conventional painting. Yet thanks to the brown-suited conjurer at the middle right, everything becomes possible; an alter ego of the artist, he explores the open belly of a swordfish with his instruments – his brushes – creating an abundance of interior scenes beyond all rational reason. Exhausted soldiers mourn their failed mission with garlands; a harsh instruction scene at the right edge evokes the socialisation rituals of a school long since past; and a drum major lacking a lower body points to regions of quiet aesthetic observation in the back rows. All of this is brought together by the swordfish mentioned above, which resurfaces as if at the opposite end of the world after a journey through all of the barriers and linear constructs of space and time. A condensation of metamorphoses of this kind elicits a feeling of existential vertigo, a confusion of categories and mental certainties. Rauch himself had likely experienced this sensation since the beginning of the 2000s, when the burgeoning art market took up this contemplative loner, waiting lists for yet-to-be painted pictures lengthened, and the tranquility of the studio increasingly had to be sacrificed to the obligation of public appearance. 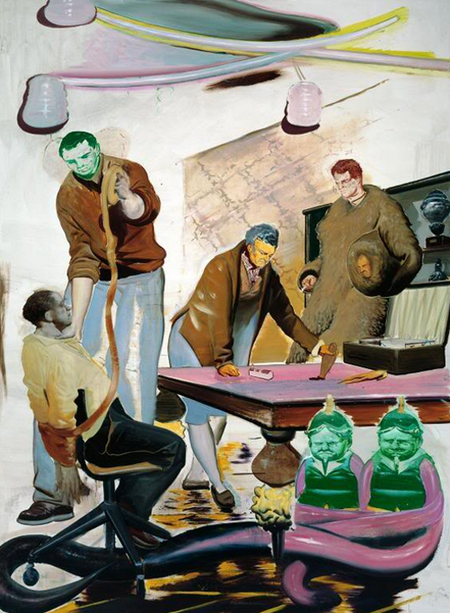 Significant elements of rivalry between advance guard and ranks are found, raising the question of which side of the barricade is the right one and who will be caught between the enemy lines in this staccato of changing friend/foe relationships. The evident leader in the situation, a hunched strategist in the attire of Arthur Schopenhauer, appears to be responsible both for the binding of a delinquent and his goateed helper, and for the fur-clad young man. On the table, war games are going on, circling among other things around the magic root of the mandrake, which according to tellurian forces can have a similar influence on uncertain destiny as any divine power. This striving for a totality of existence ­– excluding neither heaven nor hell, neither mythical predecessors nor prophetic successors – is characteristic of the artist’s work of this phase and forms the prop-rich setting for the exploration of his own artistic identity. This includes reflection on the artist’s possibilities of influencing world events or remaining detached from them.