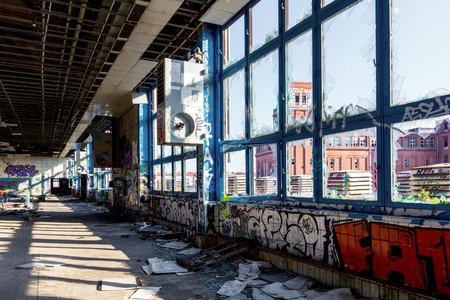 The Bärenquell Brewery may not be making beer anymore, but it's a popular haunt for graffiti artists | © Ciarán Fahey / Abandoned Berlin

Berlin’s tumultuous history has left more than a few buildings crumbling in its wake, but each offers unique insight into the past. These eight abandoned Berlin sites are magnets for intrepid visitors.

When it comes to ghosts of the past, Berlin has its share. The city’s plethora of prominent abandoned sites are stark, eerie, unheimlich (as the Germans might say, meaning uncanny or creepy) reminders of unbelievable chapters in history – until, that is, you confront them yourself. Many of the most fascinating sites in the city are products of World War II and the subsequent Cold War era of Soviet-controlled East Berlin (the GDR): an American-built spy tower built in the West to spy on GDR communications, a former GDR statistics office that also filled three floors with Stasi offices, and a Communist-era amusement park are all examples of the city’s abandoned architectural gems. Once solely the territory of devil-may-care urban explorers, many of these sites are now hosting tours as part of efforts to regenerate the sites; others still require a more creative way in (which, of course, is not advisable). Read on for eight of the most intriguing landmarks of abandoned Berlin.

Germany is famous for its beer, but one of its most interesting breweries isn’t even making beer anymore. The Spree-side Bärenquell Brewery, built in 1888 as the Borussia brewery and later bought by Schultheiss, closed on April Fool’s Day in 1994. Ultimately, it may have shuttered for any number of reasons: some believe it was the brewery’s association with the GDR and its ideology (it happened to be located on the East Side of the wall and produced beer under the state); others say it’s because locals “suddenly realised there was more to do than drink” after the Wall came down; some also say that there was simply more to drink, with the introduction of former East Berliners to previously off-limits beers from the West. This building is surrounded by strong deterrents for would-be explorers (razor wire, particularly), but this hasn’t stopped it being used as a venue for parties. As of January 2019, the brewery is to be developed into a site for offices, restaurants and retail. 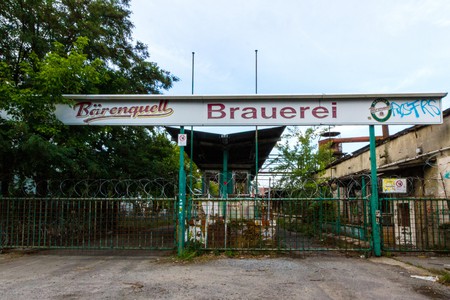 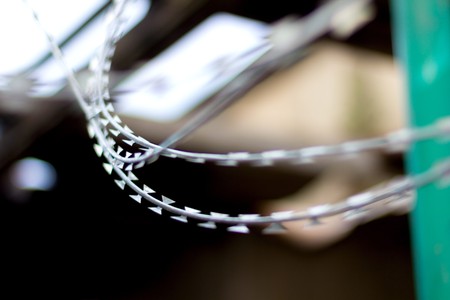 One of the more famous abandoned sites in Berlin, Teufelsberg is fairly well established on a curious tourist’s trail through the city. Built by the US National Security Agency as a spy post to eavesdrop on GDR communications on the Soviet-controlled east side of the city, the site is actually constructed on a mountain of debris schlepped there after WWII (inside that hill is another abandoned site: a Nazi military college). After the fall of the Berlin Wall, it was abandoned; today, it’s privately owned and being used as a cultural space – visitors will be charged an entrance fee (guided tours are also available), and it’s slowly accumulating some infrastructure. Many visitors head there to chill out during a hike through Grunewald Forest, hopefully catching an impromptu jam session in the makeshift biergarten – just be sure to stay on the paths, or you might find yourself in the company of some watchful drones). Take the S-Bahn to Grunewald and just start walking toward the forest – once on the trails, you’ll see the hill and buildings. 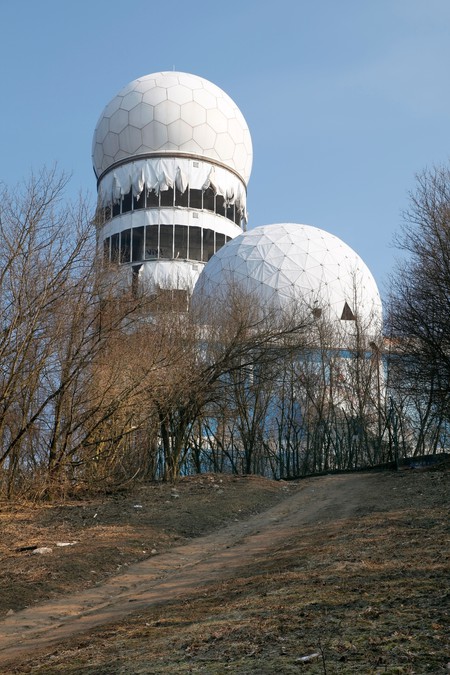 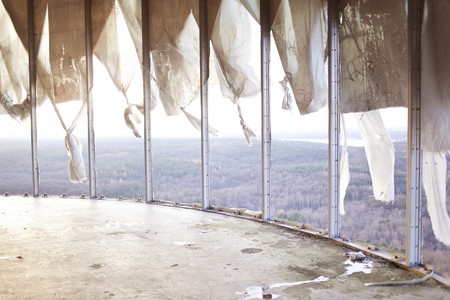 A view of Grunewald, the forest that lies to the west of Berlin, from the NSA Field Station | © Thomas Lekfeldt

Haus der Stastistik is, as the name suggests, the former site for the GDR’s statistics administration – although the notorious Stasi would also occupy three of the floors. Located right in the middle of the city in Alexanderplatz, the 45,000-square-metre Haus der Statistik was home to the federal statistics office and Stasi records from reunification to 2008. For almost a decade, the abandoned site was much loved by urban explorers – there were no plans in place for further use – but now it’s slowly shrugging off its abandoned state. It was taken over at the end of 2017 by a development arm of the city of Berlin, and has since been the subject of discussion by activists, artists, entrepreneurs and officials, who are making efforts to turn it into a cultural and arts space. 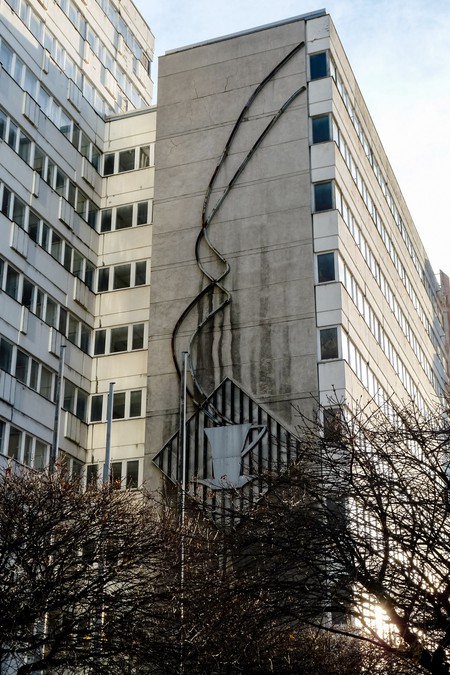 Lichtenberg’s former lido, located behind the former BVB Stadium, was built in 1928 as a place for swimmers to train for the 1932 and 1936 Olympics. After the war, in the 1970s, East Berlin’s Soviet government renovated it, and Berliners continued to swim and sunbathe there until the late ’80s, when it was closed. All that’s there today is an empty pool with a diving platform and some crumbling changing rooms. The pool needs total renovation to become fit for swimming again, but there’s been talk of revamping it to create a new social and leisure space for Lichtenberg. To visit – it’s not hard to get in – take the M6 tram to the Genslerstraße stop on Landsberger Allee. 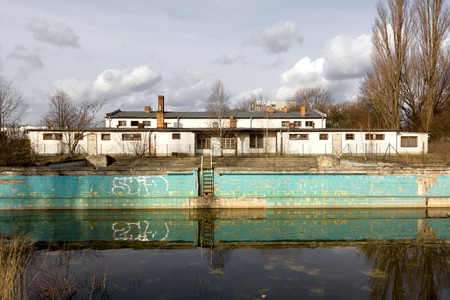 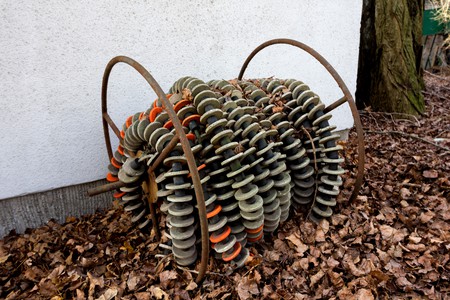 In the future, Freibad Lichtenberg might be renovated to provide a leisure space for Lichtenberg | © Ciarán Fahey / Abandoned Berlin

The old Iraqi embassy wilts away in a corner of Pankow, one of Berlin’s outer districts, even as plants flourish in and around it. Designed in 1974 by Horst Bauer (who’s responsible for several landmark GDR buildings in Berlin), the building acted as an emblem of the close relationship between Iraq and the GDR. It was in use until after the Gulf War, when the newly established unified German government, apparently eager to build ties with the West, reportedly ordered employees out – and you can still sense the flurry of the last day. Inside, the original wallpaper is still intact, and some literature and sheets of notepaper, written in Arabic, litter the floor. The walls have since been a popular place for graffiti aficionados to practise their art. The future of the building reportedly remains in the hands of Iraq, who have “perpetual and exclusive rights” to it. To get there, take the M1 tram to Tschaikowskistraße. It’s a little more difficult to access – people reportedly look for open doors or windows to clamber through, but the fence in front of the house is low. 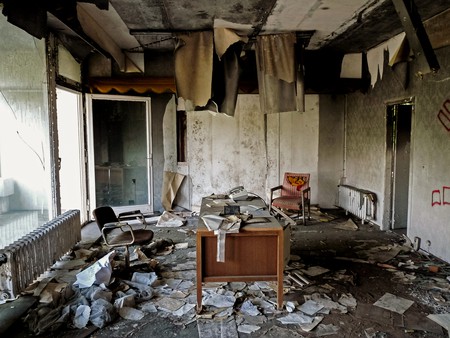 The Iraqi embassy was designed in 1974 | © Ciarán Fahey / Abandoned Berlin 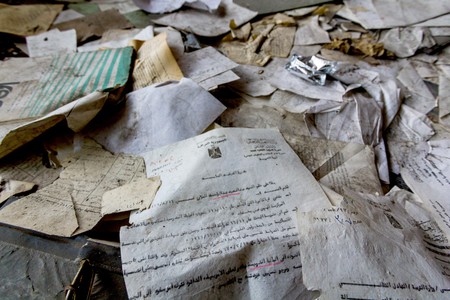 Krampnitz was used as a calvary school and driver training centre by the Nazis from 1937 to April 26, 1945, when it was abandoned for the first time – and promptly taken by the Soviets the next day, who would go on to use it for almost 50 more years until abandoning it in 1992 after the USSR broke up (you can still see intact plaques with Cyrillic lettering, complete with colourful paint). Comprised of more than 50 buildings, today the mammoth site looks like a campus from a horror movie, with trees encroaching on the structure’s broken windows and crumbling walls. However, it’s been used recently for filming: The Monuments Men (2014), Valkyrie (2008) and Inglourious Basterds (2009) all shot scenes here. Further plans for the city of Potsdam to turn it into an urban development area seem to have stalled. Before those plans change again, take a train to Potsdam’s train station, then a bus to Kramptizsee to explore it. 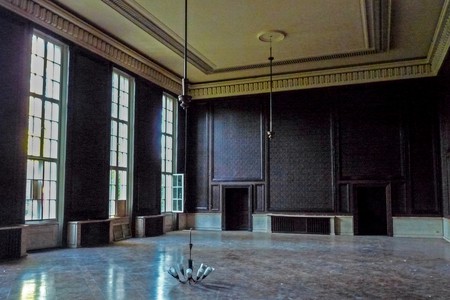 Krampnitz military base was used by the Nazis, then the Soviets, until it was abandoned in the early ’90s | © Ciarán Fahey / Abandoned Berlin

Spreepark in southeastern Berlin was originally built by the GDR as a state-run “Kulturpark” (Culture Park) and was immensely popular during the Communist era; after the fall of the Berlin Wall, an amusement park operator bought it in 1991. As it turns out, he was also smuggling cocaine and shipping it over in ride equipment sent from Peru – and it’s that little side hustle that contributed, in part, to a drop in visitors. Spreepark ultimately closed in 2002 and was damaged by a fire in 2014 (during that stretch, it was a destination for explorers willing to take a risk); two years later, the city took it over and it’s being repurposed into an arts and culture space, with some of the rides already being removed. Quite a few rides from the DDR and post-unification era, however, remain. You can now get a ticket for a tour offered by the city for five euros – just take the S-Bahn to Plänterwald. 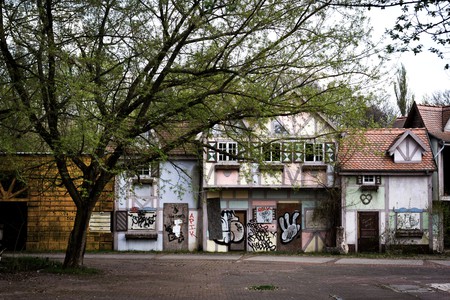 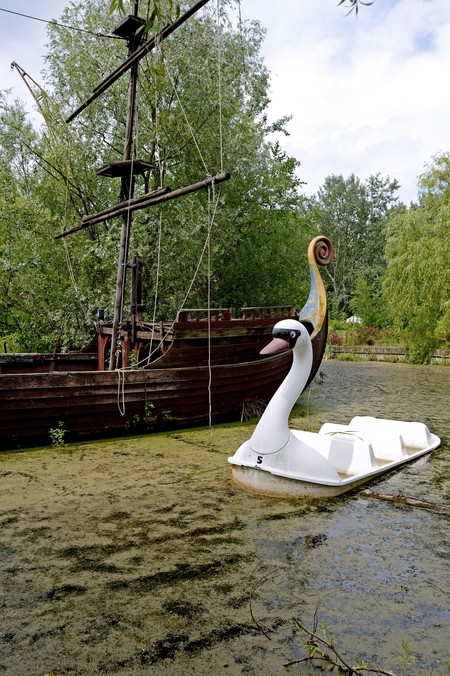 There’s nothing quite like an abandoned hospital to up the eerie factor, and 30 kilometres north of Berlin, Heilstätte Grabowsee’s expansive complex does just that: built in 1896 as a tuberculosis sanitorium, it was later turned into a military hospital during and after WWII – the second time by the Soviets and used for around 50 years. However, after reunification, any further plans to reuse the site weren’t seen as worth the cost of renovating it until recently. Educational foundation Kids Globe has taken over the site’s management since 2005, hoping to one day turn it into a children’s complex. While renovation efforts are already in progress, guided tours of the site from a historian are currently available. It’s a 50-minute drive from Berlin’s centre, or a 1.5-hour journey by various combinations of S-Bahn, regional train, and bus. 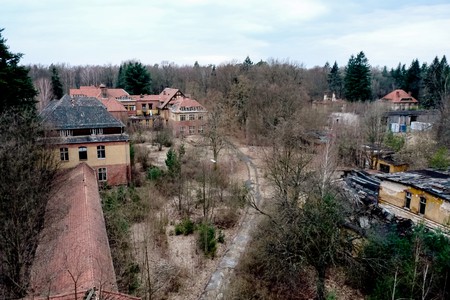 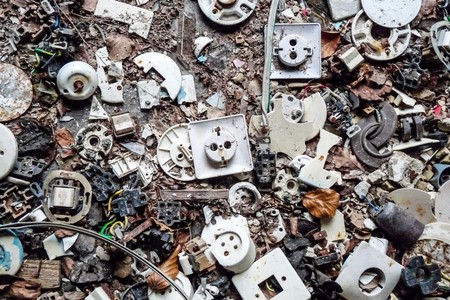