An Introduction to Germany's Traditional Dress 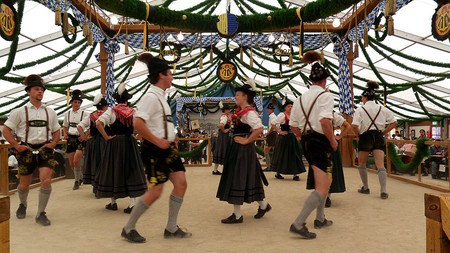 Thinking about getting kitted out for Oktoberfest? There’s more to German traditional dress, or trachten than meets the eye — the outfit can even show your relationship status! Read on to learn the ins and outs of lederhosen and dirndl, how much you can expect to pay, and make sure you show up for the next beer festival looking sharp.

The German reputation for efficiency also applies to traditional dress. To save unwanted suitors from investing time in someone who is taken, the way a woman’s apron bow is tied shows her relationship status. On the left is a green light — single, while a bow tied on the right means she’s not on the market. Then things get interesting. You may raise a few eyebrows with a bow tied at the front in the middle — it announces to the world that you’re a virgin. Finally, a bow at the back means you’re a widow or a waitress. People in Germany grew up with this, but tourists should get into the habit of glancing down for a quick bow check before turning on the charm.

For women, dirndl length is about modesty; for guys it’s more about style preference and whether you can cope with chilly legs — below-the-knee lederhosen can be worn with long socks when it’s cold out. Traditional advice states that a dirndl should be a modest one measuring jug from the ground, however, knee-length dresses are now also popular with the younger crowd. Don’t get one that’s above the knee… very few tourists wear them and they stick out like a sore thumb. It gets awkward when dancing on benches too.

Straightforward for guys, you’ll need a checked shirt with no embroidery, usually in green or red. Done. For women it’s a bit more interesting — it’s not actually a full shirt but a Britney-in-the-90s-style cut-off shirt that ends just below the bust. Why worry about warmth when you’ve got a super tight dirndl to fit into? Buying one of these can be an involved process: most places will also try to sell you the necessary… support to go under it; the trachten bra is a common part of most local women’s wardrobe.

This is where the girls finally have it easier than the guys! Nowadays most women just wear flats, low-heeled mary janes, or even wellies if the weather is terrible. You’ll be on your feet walking or dancing so avoid high heels. Guys have a difficult choice to make: should you wear something that doesn’t really fit the look, or invest in the ugliest side-laced clogs you’ve ever seen? If you don’t have some chukka or desert boots, or just really want to complete your outfit, you can pick up some thick-soled haferlschuhe for around €20. 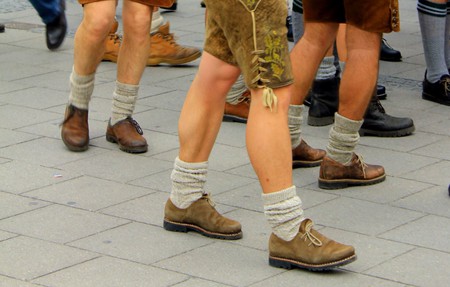 Though it’s associated with drunken beer festivals outside Germany, trachten is not a joke — it’s part of traditional German culture and worn throughout the year to festivals and celebrations such as weddings. That means it’s priced to match. A low-quality Oktoberfest dirndl will still set you back €40, or €25-30 if you buy it out of season. Considering you only get half a shirt, it’s weirdly expensive at around €20 for a basic one. Though men may already have a suitable shirt, lederhosen aren’t cheap starting at around €50 on eBay and from €80 in most stores.

Still got some budget left over? There are a full range of accessories to complete your German look. The hats are particularly brilliant ranging from trilby-style with a feather, to elaborate felt numbers with what appears to be half a broom on the top — to pull it off, you really need a moustache to match! Feel the cold? There is a range of wool vests and cardies you can buy. They look like something out of a Scottish mail order knitting catalogue, but some people manage to pull it off. For the more style conscious, smart blazers are available, but at several hundred euros they’re beyond the budget of most tourists looking for a good photo opp! 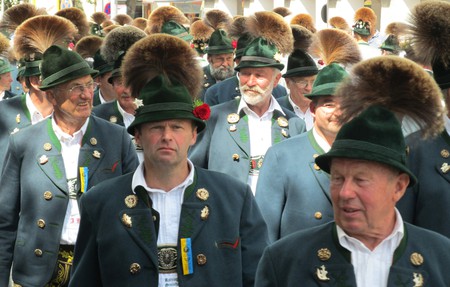