An Introduction To Expressionist Art In 12 Works 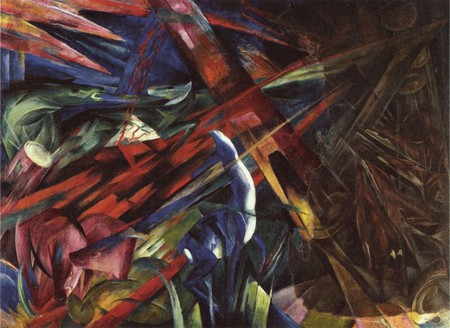 Expressionism was a progressive art movement that originated in Germany and Austria during the early 20th century. The primary concern with Expressionism was the desire to convey experiences and emotion in their raw form, rather than any physical reality, as exemplified by the film sets of Fritz Lang’s Metropolis and Robert Wiene’s The Cabinet of Dr. Caligari. Shying away from any sense of realism and naturalism, Expressionist works were explosions of color and energy. Here are 12 artworks you need to know.

Although he was not part of the Expressionist movement, the beginnings of Expressionism can be found in the works of Edvard Munch, with The Scream often cited as a prime example. Painting four versions in various media between 1893 and 1910, Munch’s work can be regarded as a blueprint for Expressionist Art. The distorted and disturbed figures, the unrealistic colors and the painting’s swirling energy all add to the work’s sense of anxiety and isolation. Apocalyptic and wild, Munch’s painting signals the start of a European (and perhaps worldwide) shift towards a more evocative and emotive style. Gone were the calming and soft forms of Impressionist works; now was the need to portray our inner primitive selves. 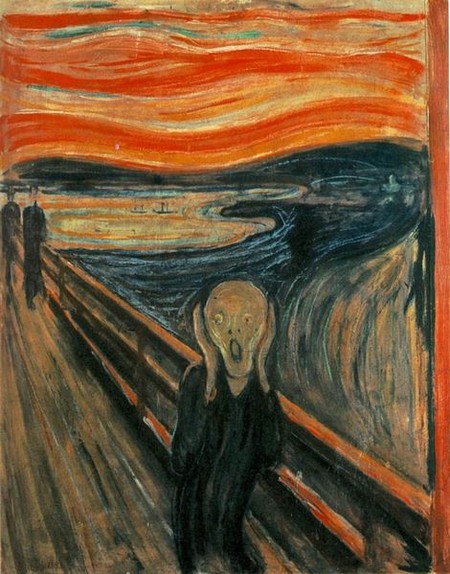 With the dawn of this new Expressionist movement came the development and formation of new artist groups. Der Blaue Reiter (The Blue Rider) was one of these – an artist collective based in Munich and active mainly during 1912 when they published their almanac. August Macke was one of the main members of this group. Macke’s early works were French Impressionist and Post-Impressionist in their style, but he later adopted Fauvist techniques of vibrant and unusual colors. 1910 marks an important year in Macke’s artistic development as he met Wassily Kandinsky, who helped develop Macke’s love of symbolism and spirituality. This work, Farewell, was painted in 1914 and was his final work before he died in the second month of the First World War at the front in Champagne, France. The painting portrays the gloom and grief of the war, with the backdrop resembling the sets of many German Expressionist films of the era. Claustrophobic and jagged, Macke’s painting is unsettling and portrays the trauma of war, not on the battlefield, but in the towns from which the soldiers came. 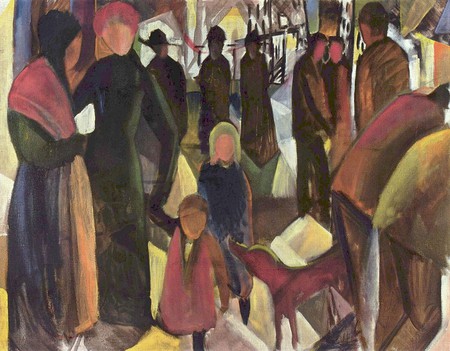 The Fate of the Animals | Franz Marc

Another founding member of Der Blaue Reiter was Franz Marc, who started their journal in 1911. This painting, created in 1913, marks a change in Marc’s previously calm and serene style. The sharp edges and cutting diagonals give this painting the appearance of shattered stained glass. The work depicts a forest on fire, with the animals trapped in the blazing inferno. The painting is believed to have been a representation of war, with destruction and chaos evident as the work’s themes. A third of the painting was destroyed in a fire and was restored by Marc’s close friend, Paul Klee, who added a brown tint to the work. The painting is tense and full of drama and marks a key point in the development of Expressionism in Germany and Europe.

Death for an Idea | Paul Klee

Swiss-German artist Paul Klee is another key figure in Expressionism. Associated with Der Blaue Reiter, Klee also taught at the Bauhaus along with Wassily Kandinsky. Klee’s style was largely different than other members of Der Blaue Reiter. While it was highly emotive, his works were more delicate, abstract and spiritual in their nature. They create a more intimate viewing experience and portray the quieter, inner feelings of Klee. Klee was passionate about music, so his works are often infused with a sense of musicality. This simple drawing, completed in 1915, shows a towering city crumbling and cracking, with ladders and trees scattered throughout. Beneath this scene is a wounded soldier, lying on the ground, left for dead. ‘Death for an Idea’ is written below in German. The work sums up Klee’s feelings about the war, particularly after the death of his friends Marc and Macke. Though simple in its execution, Klee’s drawing exudes a sense of isolation, anxiety and almost anger at the logic of war. Through his reference to the conflict as just an ‘idea,’ Klee emphasizes the unnecessary and needless nature of war.

The evolution of Expressionism in Europe during the early 20th century can be seen in other countries besides Germany. In Austria, one of the key figures and developers of the Expressionist style was Egon Schiele. Defiance of conventional forms of beauty, Schiele’s works are distorted, violent and confronting. His drawings and paintings are searing explorations of the inner psyche and challenged the false façade of Viennese society and culture at the time. Unlike German Expressionism, Schiele used drawing and tight draftsmanship to create highly emotive and raw works of art, usually with a violent sexual energy. His self-portraits, such as this one from 1912, often confront the viewer. In this work, Schiele gazes at the viewer with an air of confidence, yet he sits twisted and rigid on his seat, his face scarred and wizened. A charged painting, Schiele’s work demonstrates the departure from depictions of everyday life and society that were common to the Impressionist age to more personal representations and explorations of the self. 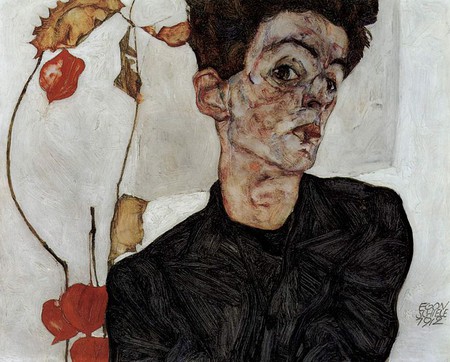 An important figure in terms of Expressionism in France was Georges Rouault. Beginning his artistic career as a glass painter and restorer, Rouault’s paintings often displayed his roots in glass, with his artworks featuring thick black outlines similar to the lead in stained-glass pieces. His use of bright color is also linked to his Fauvist influences and through his friendships with Henri Matisse and Henri Manguin. The first decade of the 20th century marks a change in Rouault’s style from the vibrancy of Fauvism to a darker existential form of expressionism. His subject matter also focused on clowns, courts and prostitutes, and his paintings from this period are often believed to be social criticisms. This painting from 1905 reveals this shift in his style and focus, with his color palette muted and somber. The figures are outlined in heavy black lines, their faces portraying expressions of anger, bemusement and boredom. His later works were often religious and explored the ideas of suffering and existentialism.

Woman with a Bag | Karl Schmidt-Rottluff

Another pivotal group in the development of Expressionism was Die Brücke (The Bridge). Karl Schmidt-Rottluff was one of the four founding members of this collective, which was originally based in Dresden and later relocated to Berlin. Die Brücke was active for a longer period than Der Blaue Reiter, and their focus was on primitive art. They are often compared to the Fauvists, as both shared an emphasis on the highly charged use of color and a rejection of naturalism. However, Die Brücke is often regarded as having more violent imagery. The works of Schmidt-Rottluff reveal this sentiment. A companion of Emil Nolde, Schmidt-Rottluff worked mainly with wood, producing over 300 woodcuts of jarring and unsettling subject matter. This painting portrays a style similar to his woodcuts and shows an influence of African art and tribal masks. The work was completed before Schmidt-Rottluff went for military service on the Russian front in 1915. The tragic expression of the woman and the limited color palette are believed to be a response to war.

The Bride of the Wind | Oskar Kokoschka

Sometimes regarded as a rival to Schiele, Oskar Kokoschka was another famous figure and exponent of Austrian Expressionism. His earlier works are more refined, but during the early 20th century, his brushstrokes became broader and his use of color more striking, his figures encased in heavy outlines. This painting is a response to his stormy affair with Alma Mahler, which began in 1912. The paint swirls around a couple, who lie entwined in the center of the composition. The colors are muted and cool, but a few darts of pinks and red hint at the passion and love in their relationship. However, the overall mood of the work is that of tragedy and loss, alluding to the end of his affair with Mahler. This work is often cited as Kokoschka’s finest and most personal. Besides creating Expressionist paintings, Kokoschka was also a writer and produced many progressive Expressionist plays.

Another founding member of Die Brücke was Erich Heckel. Originally studying to be an architect, Heckel met the other members of the artist group and became a full-time artist in 1907. He was a prolific printmaker, producing over 400 woodcuts during his lifetime. This print from 1907 shows his early roots in the Expressionist movement. Possibly a self-portrait, the eerie face gazes out at the viewer, eyeless and void of expression. The head almost appears skeletal in its appearance, or perhaps mask-like. The face hovers, separated from the dark background and is ghostly and unsettling. His later works often featured a model called Fränzi and display a similar angularity to this earlier work. Heckel’s brand of Expressionism was bold, graphic yet simple.

Although he came from Russia, Chaim Soutine became a major developer of Expressionism in France, particularly in Paris. His key Expressionist works came a few years after German Expressionism and are often cited to have created a bridge between German Expressionism and the later movement of Abstract Expressionism. Soutine painted this work in 1925, using an actual carcass as his model. The story goes that blood from the carcass seeped under the door of his studio, causing Marc Chagall to rush in, believing someone had killed Soutine. Soutine painted ten works as part of this series and is believed to have been inspired by those of the same title by Rembrandt. This work portrays the carcass split open, using contrasting blues and reds to emphasize the raw and violent nature of the subject. The loose brushstrokes, the use of heavy contouring and the visceral nature of the work can all be regarded as influences for Abstract Expressionism. 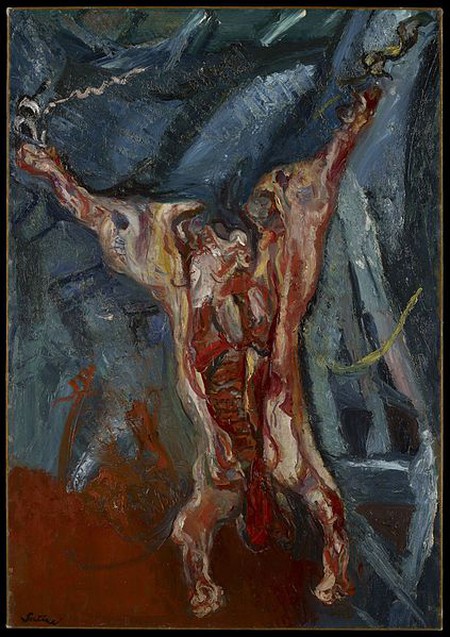 Another key player in Die Brücke was Ernst Ludwig Kirchner. Kirchner, like his colleagues, was drafted into war but was declared unfit due to health issues. This work was painted in 1915 and is often hailed as a masterpiece of psychological drama. The painting shows the artist dressed in his uniform, with amputated and bloody limbs. The work is similar to that of Otto Dix in its violent confrontation with the horrors of war. The artist is also positioned in his studio and not the battlefield. The roughness and sketchy appearance of the painting is similar to other works by Kirchner from that period. While Kirchner didn’t fight on the front, this painting can be regarded as exploring the personal effects of war and the trauma suffered by those who were drafted. A violent work, this painting shows how artists used Expressionism to convey their inner anxieties and emotions in a forceful and confronting manner. 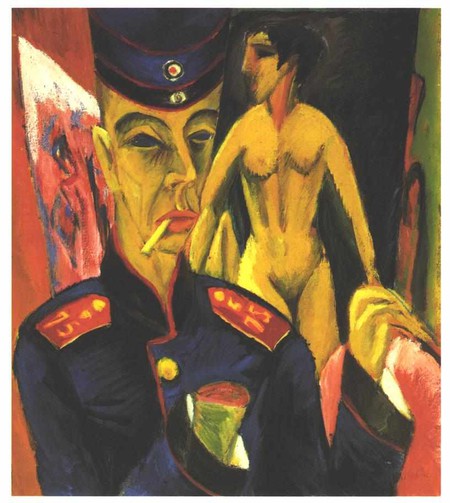 While Expressionism (as well as the art world) was largely patriarchal, there were a few women artists who contributed to the development of the style. At the forefront of the Munich avant-garde was Gabriele Münter, a pupil of Wassily Kandinsky, and with whom she would have a tumultuous relationship, ending in heartbreak. Münter created her own Expressionist style during and after her 13-year relationship with Kandinsky, fusing together Bavarian folk art, stained glass and an almost Fauvist use of color. She was also influenced by the works of Vincent van Gogh and the Impressionists, before turning to Fauvism and later Expressionism. Münter is mainly known for her landscape paintings, such as this work created in 1907, which are often melancholic and dreamlike in their appearance. However, her self-portraits also reveal her Expressionist style. Defined edges, swirls of color, sometimes vibrant, sometimes muted, and energetic brushstrokes are all part of her style. Her work influenced her contemporaries and is regarded as an important evolution of Expressionism. 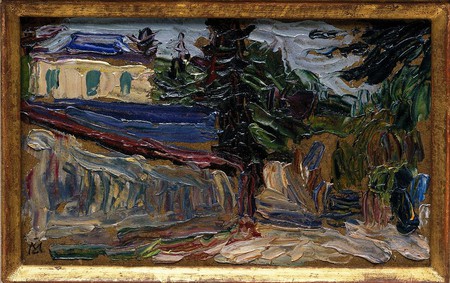