Alexander von Humboldt: The Most Famous Scientist Of His Age 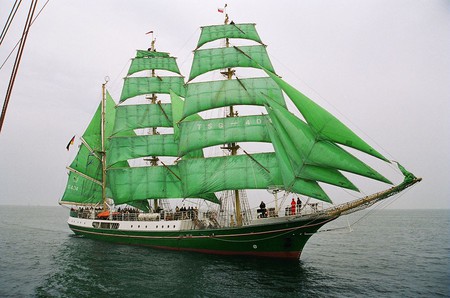 No other man has so many things named after him as Alexander von Humboldt. Whether it be the Humboldt Current, the Humboldt Penguin, minerals such as Humboldtit, or the Universidad Alejandro de Humboldt. The number of things to be found across the world bearing his name, from species to institutions, is truly astounding yet, simultaneously, in many areas of the world this individual has faded from our consciousness.

Though we might not know it, Humboldt helped shaped the entire way we see nature and our environment. His observation of the global connections between all aspects of nature was revolutionary in the Western world. Our entire environmental consciousness and notions of our eco-system have been shaped by Humboldt’s findings. Furthermore, not only his scientific observations but also his literary style and character would go on to influence the likes of Charles Darwin, Simón Bolívar, John Muir, Henry Thoreau, Frederic Church among many others. 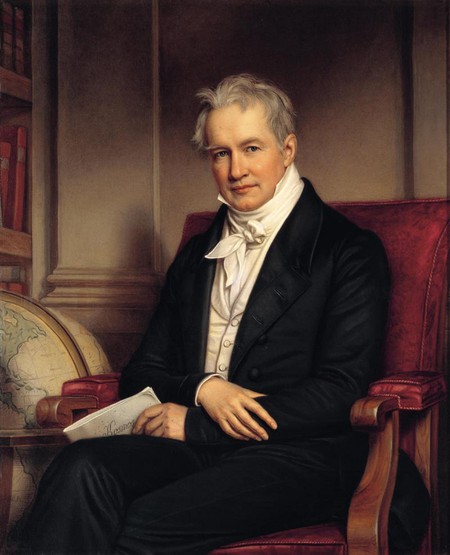 Friedrich Wilhelm Heinrich Alexander von Humboldt (1769-1859) was born in Berlin to a Prussian aristocratic family. His brother, Wilhelm von Humboldt was a brilliant linguist, a Prussian diplomat who revolutionized the Prussian educational system. He was also the founder of the now Humboldt University of Berlin. Unlike his brother however, Alexander von Humboldt had no intention of having a stable life in Europe; he wished to travel and explore the world. After some initial setbacks in getting permission for an expedition, Humboldt finally received it from the Spanish Crown to explore Latin America in 1799 with his companion, the French botanist, Aimé Bonpland. This opportunity was unique, up to that point the Spanish Crown was reserved about allowing outsiders from exploring their territories.

With an array of scientific instruments, Humboldt would map, investigate and explore the Latin American continent from its cities to its people, plants and animals, rivers and mountains, infrastructure and economy to an unprecedented level. Seen to many as the last great polymath, everything to Humboldt was interesting and connected. He traveled deep into the continent’s interior and mapped the Orinoco River and dissected electric eels to understand their electricity. He climbed Mount Chimborazo, the largest mountain in Ecuador, measuring and noting everything from the changes in altitude to the flora and fauna, surveyed and analyzed Cuba’s natural environment, and in Mexico he meticulously noted the mining activity in the region and explored the art of the ancient civilizations of the continent prior to European colonization. Before leaving for Europe, Humboldt also traveled to the United States in 1804, becoming close friends with the President at the time, Thomas Jefferson. 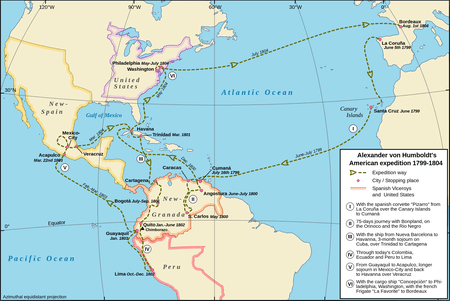 Other expeditions included traveling to Switzerland and Italy. More significantly was the expedition where he travelled to Russia in 1829. With a desire to gain valuable insights about the nation’s resources, Russia offered to pay for the expedition though they tightly monitored his movements within the country. This expedition provided useful insights for drawing global comparisons and analyses of nature.

Humboldt’s explorations and observations have had a resounding impact not only in terms of scientific inquiry and knowledge but also indirectly in various spheres of global consciousness and was referred to by Bolívar as the ‘true discoverer of Latin America’. He found, for example, that the Orinoco and Amazon rivers were connected by a waterway, resolving an old European question. His mapping of the continent provided unprecedented accuracy. He was a pioneer in outlining vegetation zones and developed the revolutionary concept of isothermal lines; the categorization of different areas that have the same mean temperature across the globe. Fascinated by earth’s magnetic properties, he measured a location’s magnetic strength, setting the foundations for geometric readings and helped establish stations across the world for global comparisons. As an experienced climber of various mountainous regions and a keen observer of volcanoes, he promoted volcanic activity as central to rock formations as opposed to the oceans, disproving Neptunist views on how rocks were formed. 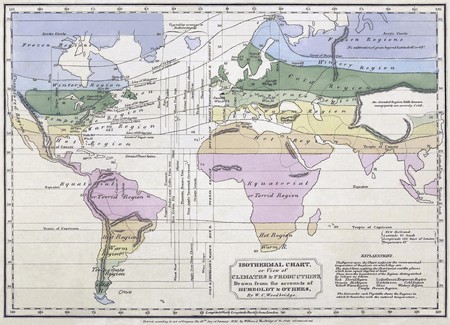 All these observations, among many others, reflect Humboldt’s way of perceiving the world and leads us to his most fundamental contribution: the interconnectedness of nature. During a time where the sciences were becoming more specialized, Humboldt progressed in the opposite direction. He believed nature to be an ecosystem, where one development or action would result in a chain reaction. This view would change the way the Western world saw its engagement with nature. It was Humboldt, for example, who first discovered the importance of forests and trees for the atmosphere, their retainment of water and pivotal role in tackling soil erosion. Consequently, Humboldt saw deforestation as having disastrous effects. 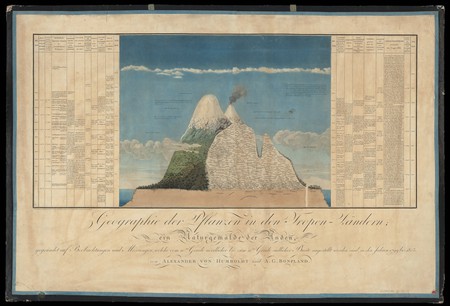 Throughout his lifetime, Humboldt was at the center of scientific debate and inquiry, inexhaustibly exchanging ideas with his contemporaries. From traveling to London or attending lectures in Berlin, to debating in the salons of Parisian society, Humboldt was a magnetic force of scientific exchanges. Some of his most notable works included Personal Narrative, Political essays on the Kingdom of New Spain, Aspects of Nature, Views of Nature and the most ambitious work of Cosmos.

In addition to including scientific findings, Humboldt valued the importance of emotion in describing his analyses of nature as well as using visual aides. Consequently, Humboldt presented his findings as a combination of facts and intriguing narrative, outlining nature’s interconnectedness and amassing a large spectrum of readers. Seen as the world’s most famous living scientist, many individuals including intellectuals, possessed copies of his work. These included Simón Bolívar and Charles Darwin. The most influential of his books for Darwin was Personal Narrative, which he enthusiastically re-read, annotated and used as a source of reference. Humboldt impressed his contemporaries to such an extent that Thomas Jefferson deemed him the most important scientist in the world (they would write to one another often). His works and writing style were captivating and eye opening and also gave new inspiration to the naturalists of the day including writers such as Henry David Thoreau. 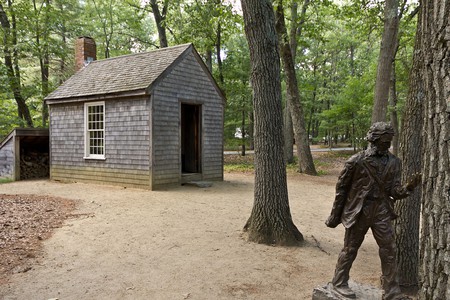 Alexander von Humboldt died in May 6, 1859 in Berlin at the age of 89. His death was mourned all over the world and the centenary of his birth on the 14th of September 1869 was celebrated across the globe with festivities and monuments made in his honor. Though we might now take it for granted, the notion of the interconnectedness of nature was not obvious in his time, making his work revolutionary. His strong advocacy against human exploitation, his warnings about the impact of human activity on the environment and his promotion of a global scientific community sharing information have not lost their relevance in today’s world.