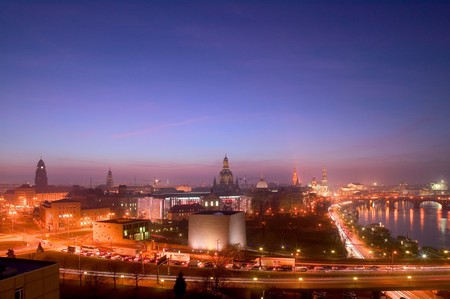 Dresden’s Inner Altstadt is the perfect place to get familiar with the city’s history, culture and architecture. Starting at Theaterplatz and ending at the oldest place in the city’s history, the Altmarkt, a morning or afternoon walking tour takes visitors swiftly to some of Europe’s most beautiful buildings: sensational Baroque architecture, a riverside stroll and a classic communist-era landmark.

Theaterplatz, located a short distance from the River Elbe, is a central gathering point for locals and visitors alike. It opens onto the Zwinger complex of buildings, a must-visit for any traveler. Labeled as a Gesamtkunstwerk – “complete work of art” – it was rebuilt after the destruction of the Second World War, similar to most of the Altstadt buildings that exist today. This Baroque jewel is home to the Old Masters Gallery at the Sempergalerie, the Mathematics-Physics Museum and Porcelain Collection. The Nymphenbad is a beautiful example of a Baroque fountain. Exit the Zwinger and on the left is the world-renowned Semper Opera House, originating in 1878 and reopened after a rebuild in 1985 restored it to all its High Renaissance splendor. 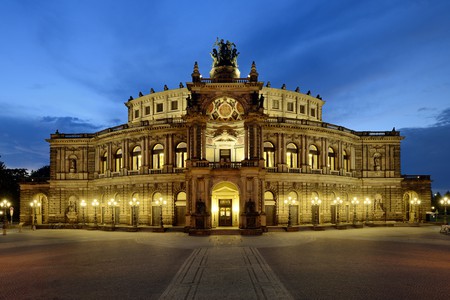 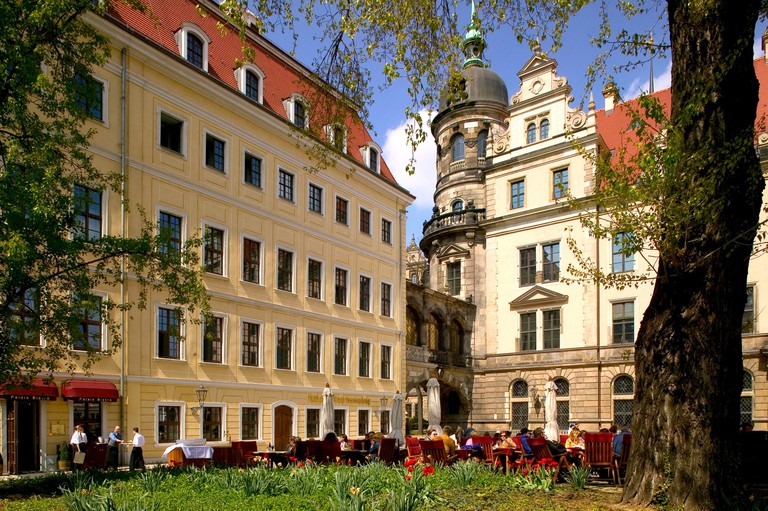 Dresden's Royal Palace | © Sylvio Dittrich/dresden.de
Directly across Theaterplatz from the Semper Opera House is the Residenzschloss, one of the most historically significant locations in Dresden. Principally Renaissance and neo-Renaissance in its façade, it was home to the royal family between 1485 and 1918, and has long been a series of interconnected museums. The highest point is the famous Hausmannsturm (Hausmann Tower), which rises to 328 feet (100 meters) and has an observation tower 128 feet (39 meters) up, providing a wonderful view of the Altstadt for visitors. 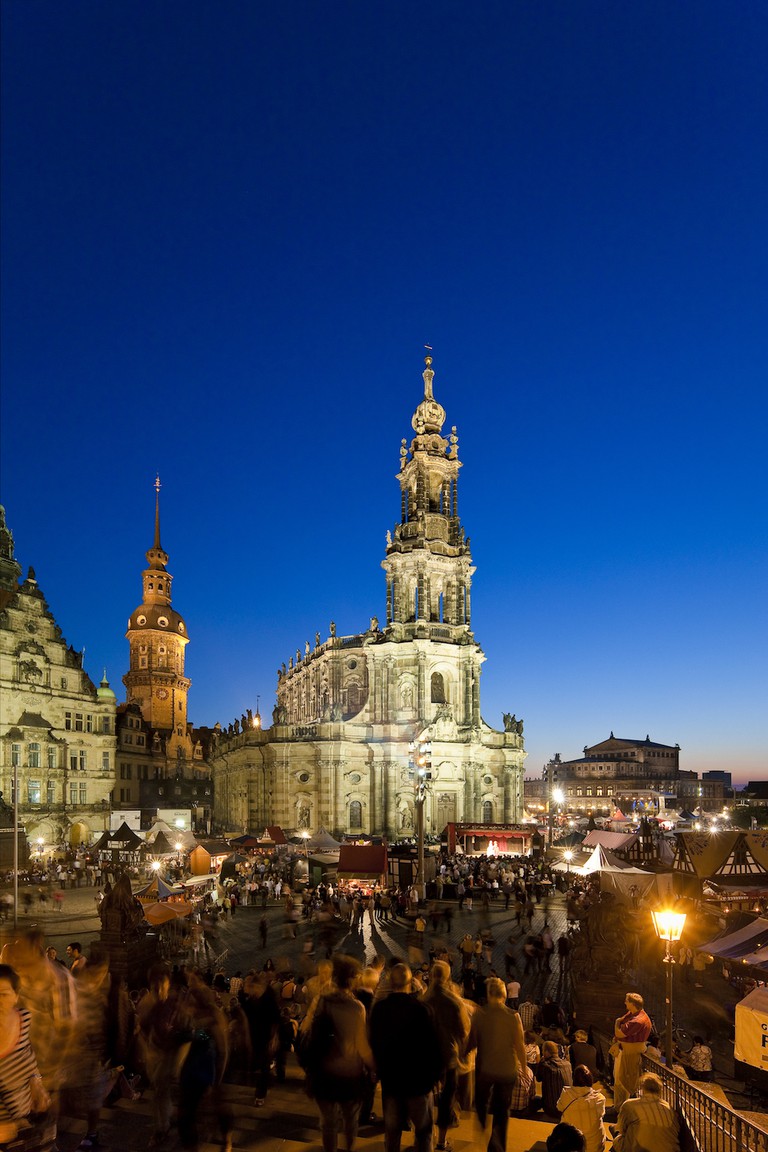 Dresden Stadtfest 2010
The spectacular Baroque Catholic cathedral, the Hofkirche, is the Royal palace’s next-door-neighbor, a short walk along Sophienstraße. It has been open since 1751 and is the final resting place for 49 members of the Wettin royal family, including kings and other rulers. It covers 51,000 square feet (4,800 square meters), making it the largest church in Saxony, with Italian artisans central to its creation. Check out the Italienisches Dörfshen (Italian Village) restaurant on the nearby banks of the Elbe, which commemorates the Italian influence on the building of the city’s impressive cathedral. 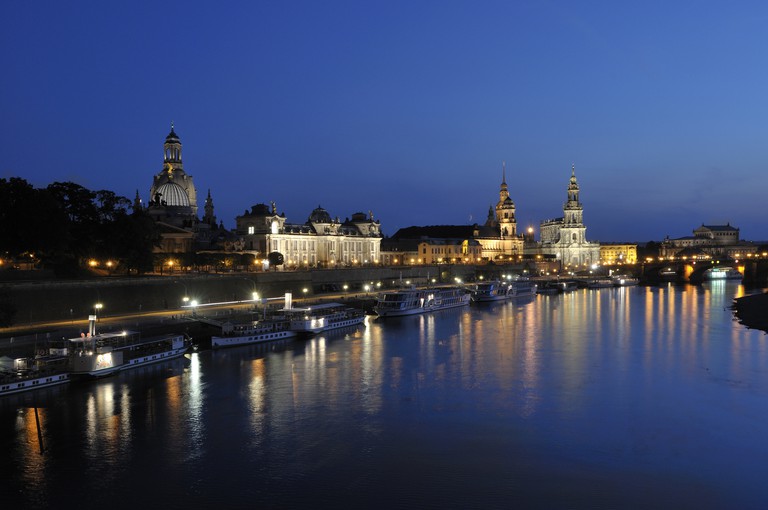 Dresden's Brühlsche Terrasse, with silhouette of the Kunstakademie, Frauenkirche and Cathedral at night | © Frank Exß/dresden.de
The Brülsche Terrasse is situated along the Elbe close to the Hofkirche, and it provides one of the most delightful strolls anyone can have in any city in the world. Running parallel to – and 33 feet (10 meters) above – the river, it has been labeled the “Balcony of Europe,” said to be because of its attraction as a meeting point for visitors who want to take in the impressive Dresden city sights along its banks. Beneath this area of the city is the so-called Dresden Fortress, with walls that experts consider the oldest Renaissance structures in Dresden. There is also a 400-year-old city gate, casemates and vaults, many parts of which are open to visitors.

At the end of the Brühlsche Terrasse is the Albertinum, which was once the location for the Armoury of the Dresden Fortress, and since the 19th-century home to city art collections. One of the few buildings to escape almost total destruction in the February 1945 Allied bombing raids, it had to be restored and refurbished after catastrophic flooding in 2002. Constructed between in 1884–1887, it now houses the fabulous New Masters Gallery and the Sculpture Gallery – and, sensibly, it features flood-safe storage areas. 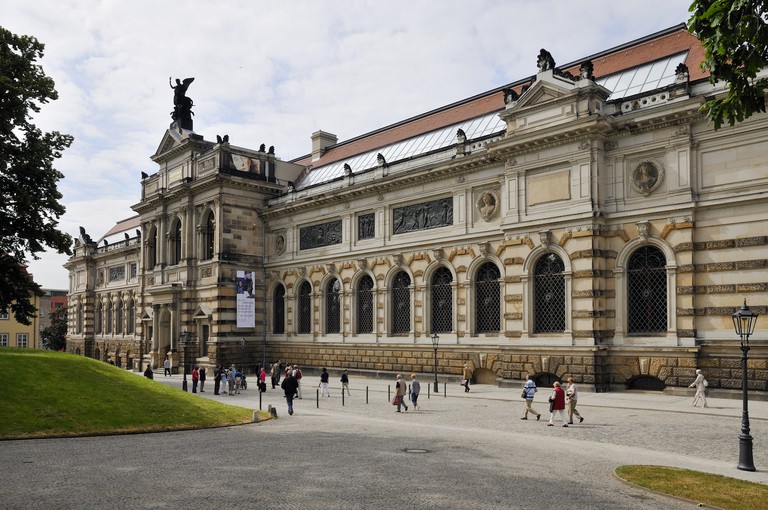 The Albertinum is home to Dresden’s Gallery of Modern Masters and the state sculpture collection © Frank Exß/dresden.de

After leaving the Albertinum, a minute across the Brühlsche Garten, still just a few feet away from the Elbe, is the city’s New Synagogue. The new series of structures here for the city’s Jewish community was finished in 2001 and they are hugely symbolic. The Semper Synagogue, named after its designer and dating back to 1840, was one of thousands of Jewish buildings destroyed across Germany in 1938’s notorious Kristallnacht (Night of Broken Glass). 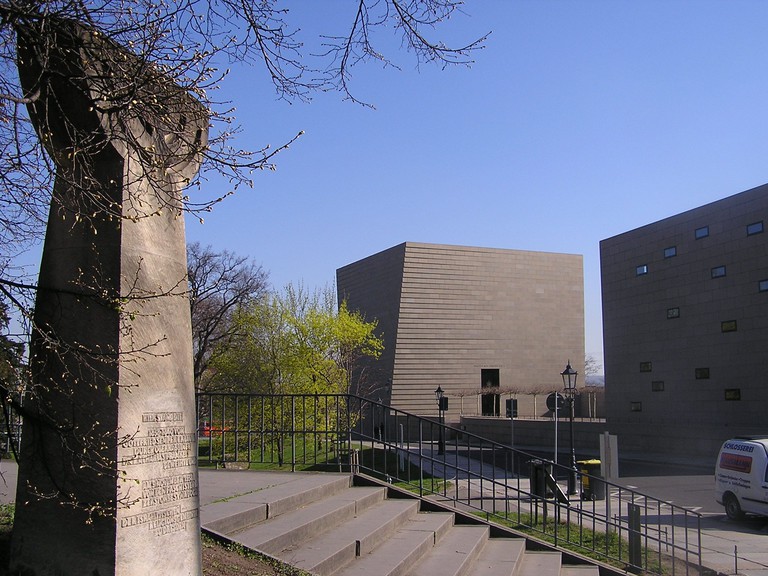 Dresden's New Synagogue | © Christoph Münch/dresden.de
From the New Synagogue on the eastern edge of the Altstadt, head back past the Albertinum along Tzschirnerplatz, right onto Rampische Straße, until reaching the Frauenkirche – a walk of around 550 yards (500 metres). The Frauenkirche, dating from 1726–1743, is one of the most impressive sights in the city, though its rebuild after the fall of communism was controversial: this building had been left for decades as a ruined reminder of the destructiveness of war. It looks out across Neumarkt, a square that has for some time been a center of feverish (re)building activity to return it to its pre-war state. 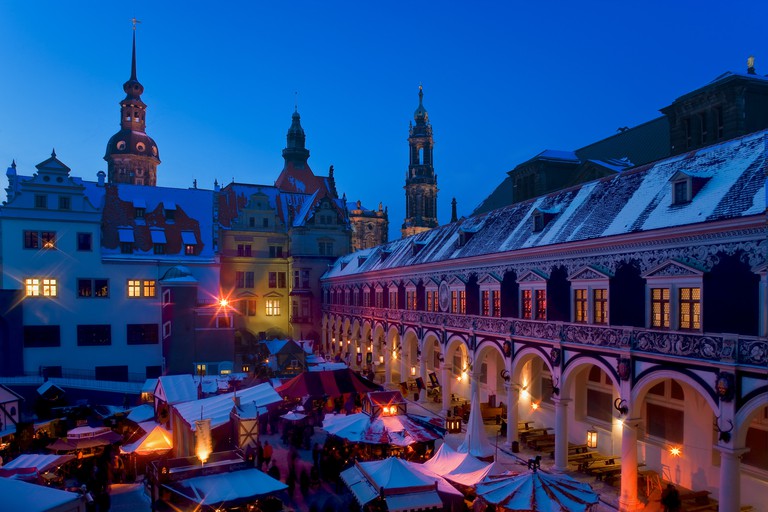 Christmas market at Dresden's Stallhof, once the location for jousting and other events | © Sylvio Dittrich/dresden.de
The Stallhof is another of Dresden’s many unmissable sights, situated along Töpferstraße, a connecting street between the Stallhof and the Frauenkirche. Its exterior is called the Procession of the Princes because of the fantastic mural representing the Wettin royal family history – the Stallhof (Stall Courtyard) itself is part of the adjoining Residenzschloss (Royal Palace). In the Middle Ages, knightly tournaments took place here; half-a-century or so later it is home to several events, including a Middle Ages Christmas market.

At the end of the Stallhof, walk along Schlosstraße, which leads on to Seestraße, to the Altmarkt. On the way, you’ll walk past the Kulturpalast, a fantastic communist-era structure that reopened in early 2017 and is now home to the Dresden Philharmonic and the city library. The Altmarkt is arguably the heart of Dresden’s Altstadt, a place first recorded being used in 1370, making it the oldest part of the city. A former location for city festivals and tournaments, at the end of the Second World War the whole area was little but rubble. Slowly rebuilt over many decades, it is now packed with cafés, restaurants, hotels and apartments, often with Baroque-era façades. With a history going back to 1434, the Altmarkt’s Dresdener Striezelmarkt is the oldest Christmas market in Germany. 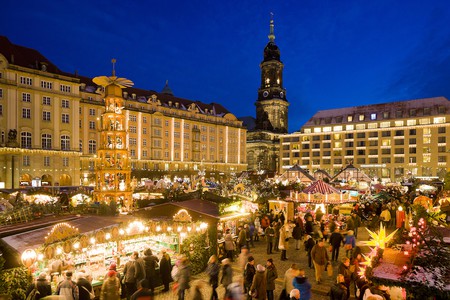 Dresden’s Striezelmarkt is the oldest Christmas market in Germany, located at the city’s Altmarkt | © Landeshauptstadt Dresden, Amt für Wirtschaftsförderung/Sylvio Dittrich
Give us feedback