A Guide to the Costumes of Germany's Carnival 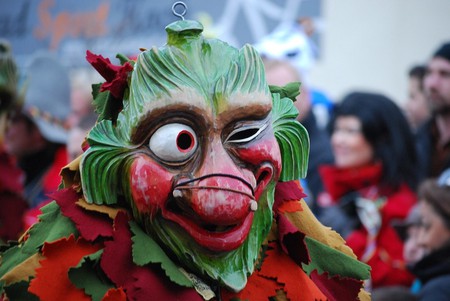 Carnival in Germany is not a mere event, but a big enough deal to be known as the Fifth Season. Among all the traditions, rituals and quirks associated with carnivals across Germany, costumes play a very important part. Carnivals are an opportunity for people to give free rein to their imagination and daring as far as costumes go, so bunnies marching with Donald Trump, superheroes parading with princesses and minions in conversation with God-knows-whats are a common sight. However, certain rituals require special costumes to be worn. Let’s take a look.

Carnival season in most parts of Germany kickstarts with gusto on November 11, at 11.11 am sharp, with the Hoppeditz awakening. In North-Rhine Westphalia (especially Cologne and Düsseldorf), a performer in a jester costume emerges out of a mustard pot in the town square to mark the beginning of carnival festivities. He then proceeds to deliver a biting, insulting and outrageously scathing speech lined with good humour, known as Narrenschelte (‘Joker’s Scolding’). The mayor often responds to it from the town hall balcony. 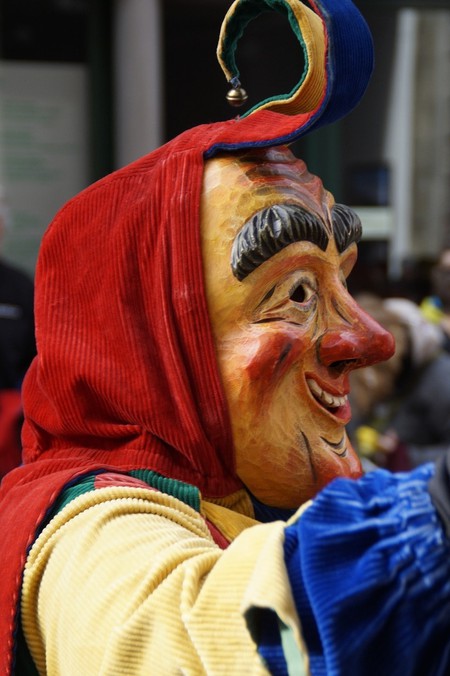 In southwestern Germany and northern Bavaria (as well as western Austria, German Switzerland and Luxembourg), carnival is known as Fastnacht. Fastnacht is marked by special costumes absent or rare in other parts of Germany. A lot of people sport wooden masks of ‘wild characters’ (Wilde Leute), such as beasts, devils and witches. There are seven Fastnacht characters, or costumes, one of which is a jester with buck teeth and dressed in a goose feather costume. This tradition is said to be connected to ancient times when grotesque masks were used in an attempt to scare away the evils of winter and darkness. People often dressed in bright, colorful ‘spring’ costumes to accompany the ‘wild characters’, symbolising that spring is not far away. An alternative theory is that the tradition is rooted in the church’s concept of good and evil. Fastnacht masks are often handed down from generation to generation. 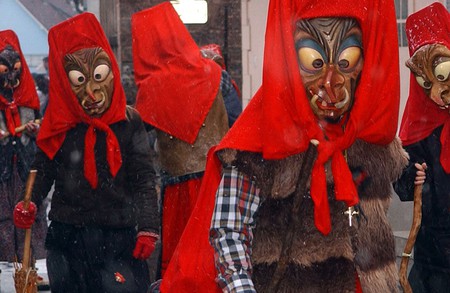 After ‘Hoppeditz Awakens’ in November, the actual carnival celebrations begin in February the following year. In North-Rhine Westphalia, on ‘Fat Thursday’ before Ash Wednesday, women in witch costumes symbolically take control of the town. Traditionally, women happily go around snipping off men’s neckties, often offering a kiss on the cheek as compensation. 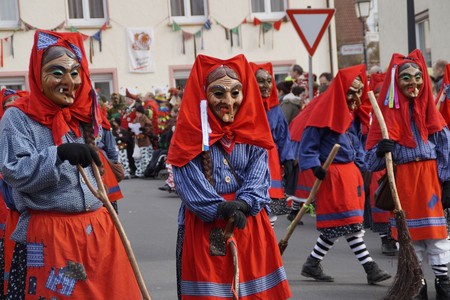 The prince, the peasant, and the virgin costumes

Cologne is credited with hosting the biggest, snazziest, and maddest carnival in all of Germany. A carnival quirk peculiar to Cologne is the presentation of the Kölner Dreigestirn – a prince, a peasant, and a virgin. These three symbolic figures deck up in appropriate costumes, though all three are played by men! The smooth-faced virgin, in flowing gowns and long hair, draws the most giggles from the crowd. 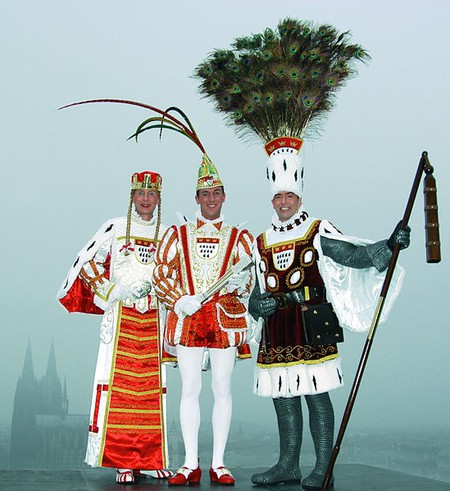 In specific parts of Southern Germany, men dress up in humongous straw bear costumes during the carnival. Sometimes, artificial materials or twigs are also used to make these costumes, though they are probably not any less scratchy or uncomfortable. Realistic masks and headpieces are an integral part of these costumes. The costume is said to represent the dryness of winter, or ‘dancing bears’ that were part of traveling circuses in ancient times. 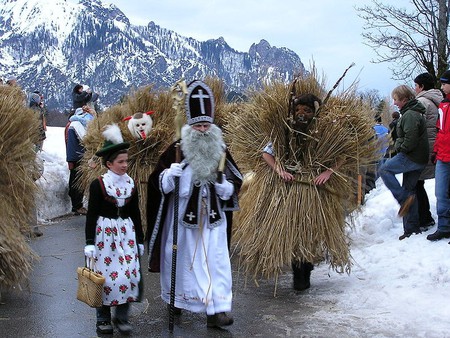 In certain South Germany regions, people dress up as grotesque witches and attempt to scare people by dangling pig bladders at them, invariably drawing shrieks from the parading crowds.