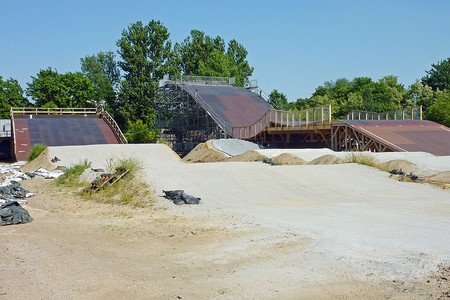 Located in Köpenick, on the southeast of the city proper, is Berlin‘s Mellowpark, the largest outdoor sports park in Europe. The park is designed predominantly for BMX biking and skateboarding, a central feature of the city’s youth culture which draws thousands of visitors a year. But despite its popularity, the park has had its fair share of trials and tribulations over the years. Here’s how it grew into what it is today.

Mellowpark was established in 1994 as a sports and leisure park for teens and their families. In 1999, the proposal to move the park into an old cable factory won a city contest named Teens Build the New Berlin. The new location was a resounding success – the park rapidly gained popularity, and by 2008, only a few years after its construction, was already receiving tens of thousands of visitors a year.

But a threat to the park’s survival was looming. in 2010, a real estate developer bought the lot next to Mellowpark, intending to build apartment blocks. The developer suspected that no prospective buyers would want to live next door to a noisy skatepark, and demanded that the venue be closed down. Despite multiple public protests, in 2012 the park was moved to its current location across the street from Berlin’s football stadium, in Köpenick near the River Spree.

The new park covers more than 60,000 square metres (646,000sq ft) and comprises indoor and outdoor facilities, including hiking trails, ramps, skating areas, beach volleyball courts, dirt jumps for biking, half pipes, empty concrete pools, a camping area and much more, with all the attractions geared towards sports enthusiasts of all ages and experience levels. The Youth Welfare Office is the park’s largest benefactor, donating €75,000 (£69,000) each year to its upkeep and development.

Mellowpark hosts a multitude of different sporting activities, including BMX competitions – including Germany’s high-profile BMX Championship, the Redbull Revolution bike race and the Rebel Jam, an international BMX competition – as well as basketball matches and even graffiti events. These events draw thousands of visitors from around the world, both to compete and to watch.

Mellowpark continues to serve as an important public space dedicated to the city’s youth culture. It is viewed as a model for integrating urban youths into public spaces across Europe and beyond – not to mention a thriving hub for BMX culture on a national scale.