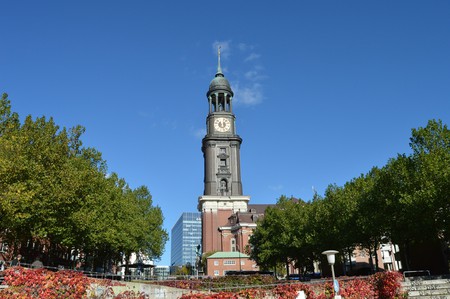 Hamburg has many beautiful churches but there is no other like the grand St. Michaelis. The ‘Michel’, as the locals call it, is one of the most important baroque churches in northern Germany and a landmark of Hamburg. Every year more than a million people go through its doors to attended services, enjoy wonderful church music, visit the largest crypt in northern Europe and ascend the tower for unmatched views across the city. 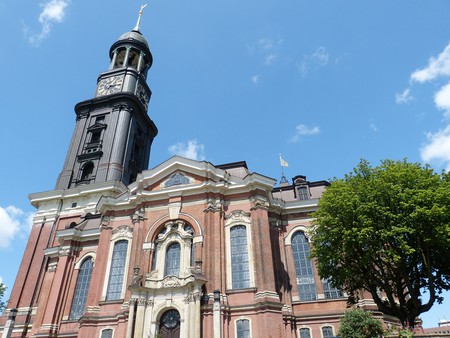 The history of the St. Michaelis church is a story of calamity and perseverance. In the three centuries since the church was first erected, it has been completely destroyed multiple times, only to then be rebuilt better than it was before.

The first church of St. Michaelis was completed in 1685. As the first church in Hamburg built after the Reformation, it was not only the newest and the largest, but also the first Evangelical Lutheran church without a Catholic past. Half a century later, in 1750, the church was struck by lightning and burned down. This was not taken as a bad omen and a decade later, a new, baroque church was built in its place. In 1906 another fire, this time caused by a blow lamp in the wood tower, completely destroyed the building.

Between 1906 and 1912 a third church was built using the old plans but, this time, reinforcing the construction with steel and concrete. Just 30 years later severe damages were caused by air raids during the Second World War. Again, St. Michaelis persevered. The church was reconsecrated in 1952 and has since undergone complete restoration. 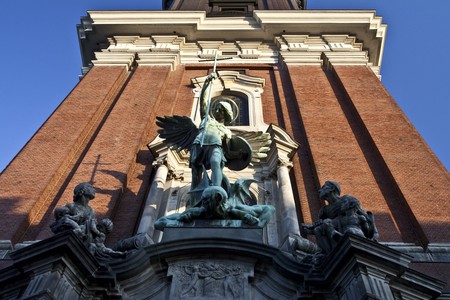 From the crypt to the tower

A memorable part of visiting the St. Michaelis church is descending down into the large crypt. It’s the final resting place for over 2,000 wealthy and influential citizens of Hamburg. These include Ernst Georg Sonnin, one of the architects of the church and the crypt, and the famous Hamburg composers Johann Mattheson and Carl Philipp Emanuel Bach. Completely renovated in 2000, the crypt now hosts church services and concerts.

Yet, perhaps the most impressive attribute of the church is its 106-metre high observation platform. Directly above Germany’s largest clock tower and next to the impressive church bells, visitors can enjoy splendid panoramic views across Hamburg. The outlook is especially beautiful in the evenings when the sun sets and the city lights begin to glow. 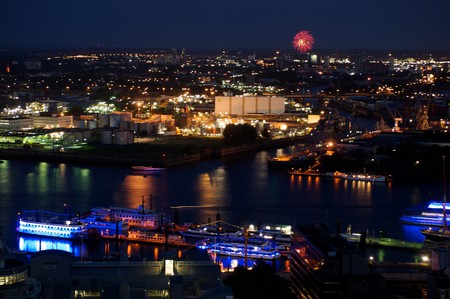 Hamburg is renown for its church music and the St. Michaelis church is one of the best places to see why. In addition to weekly musical vespers and regular choir concerts, the church hosts a variety of other concerts throughout the year. Highlights are organ concerts on St. Michaelis’ five organs, performances of pieces by Bach, Brahms, Verdi, and other composers, as well as special events by famous choirs and orchestras. The church’s own horn ensemble performs from the church tower on the first Advent Sunday, Christmas Eve, New Year’s Day and Easter Sunday. 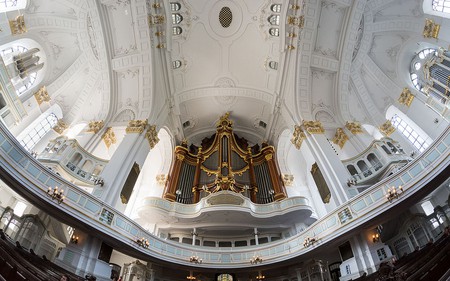 The St. Michaelis church is also tied to one of Hamburg’s oldest traditions. Every day for more than 300 years, a tower warden plays a trumpet chorale from the church tower to the north, south, east and west. Once upon a time their music was a sign for the opening and closing of the city gates. The current wardens – Horst Huhn and Josef Thöne – have been at their posts for over two decades and delight the visitors and passers-by with a different chorale each day. They can be heard at 10 am and 9 pm from Monday to Saturday and at 12 pm on Sunday.