A Brief History of the Bauhaus

The 20th century’s most influential school of art, architecture, and design, the Bauhaus was founded in Weimar by German architect Walter Gropius in 1919. At the core of Bauhaus theory was a utopian vision of fluid boundaries between artistic creativity and design utility, giving rise to a single, all-encompassing art form. Short-lived but staggeringly impactful, we give you a brief history of the Bauhaus (1919-1933).

Machine Age industrialization forged a dichotomy between art and industry. Anxieties surrounding machine-made goods reached new heights in contemporary culture; manufactured products were suspiciously devoid of the soulful craftsmanship that artisans took pride in throughout history. Gropius’ answer to the unacceptable departure of art from craft was to reify the concept of Gesamtkunstwerk – a 19th century German term translating to ‘total artwork’, or the convergence of multiple art forms to create one superior design. 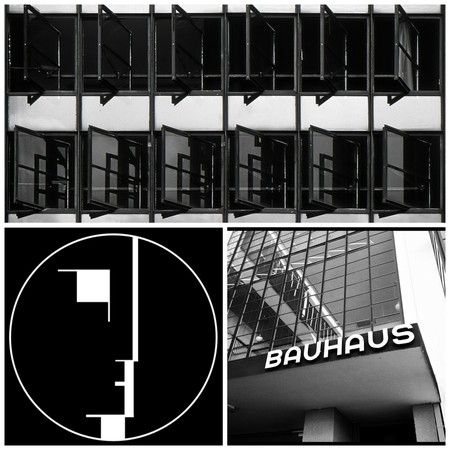 Under the guise of likeminded designers and artists such as Paul Klee and Wassily Kandinsky – amongst many others – Bauhaus students learned to transform ‘Art into Industry’ across mediums, from weaving to carpentry, ceramics to bookbinding. In 1925, Gropius moved the school from Weimar to Dessau, where he designed a new building in his Modernist vision. His architectural plan maximized spatial efficiency to include studio, classroom, and administrative space. Here, students applied key Bauhaus principles to their crafts.

Marcel Breuer’s disciples learned to deconstruct the very nature of furniture, reducing designs and replacing materials to produce lighter, mass-producible inventions. In the metalworking studio, designers such as Marianne Brandt forged light fixtures and dishware with both craftsmanship and increased utilitarian ease in mind under the leadership of Hungarian painter, photographer, and professor, László Moholy-Nagy. Graphic designer Herbert Bayer formulated a Bauhaus-specific typography that served a promotional purpose for the school.

In 1928, Gropius resigned as the school’s Director, suggesting fellow architect Hannes Meyer as his successor. Meyer upheld the majority of Gropius’ principles, placing particular emphasis on functionality and design for the masses. Meyer served as Director for only two years before he was dismissed by the city of Dessau for his Communist leanings, succeeded by architect Ludwig Mies van der Rohe. In 1932, the Nazi Party motioned to discontinue the school in Dessau as students became increasingly politicized and subsequently threatening to their cause. Ludwig Mies van der Rohe briefly continued the school as a private institution in Berlin, but steadily decreasing political stability tore through Germany as World War II loomed. In 1933, the school’s doors closed for good.

Several former Bauhaus practitioners, including Walter Gropius, Marcel Breuer, László Moholy-Nagy, and Josef Albers, brought the movement to the United States when they fled Europe during the war. Chicago became one of the most prominent cities for experimental architecture and design in the 1930s, and served as the site of Maholy-Nagy’s New Bauhaus (now the Illinois Institute of Technology). Today, remnants of the Bauhaus school are preserved in Europe and throughout the United States, from Chicago to New York City and Massachusetts.