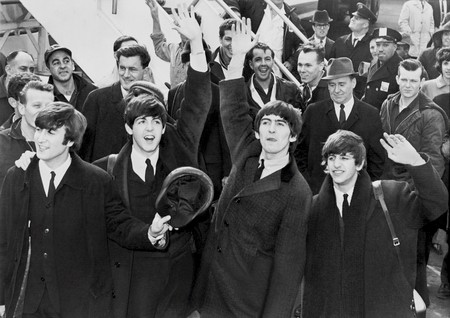 ‘I might have been born in Liverpool, but I grew up in Hamburg’, John Lennon allegedly once quipped when a journalist asked what growing up in Liverpool was like. Between 1960 and 1962, the new Beatles played an estimated 281 concerts in Hamburg’s notorious red light and party district, sometimes starting at 7pm and finishing at 7am. In two short years, they played more live music hours in Hamburg than anywhere else in the world in their entire career.

It was in Hamburg where they learned how to play as a band, how to improvise and to entertain any audience. It was here that they made their first recording, that John, Paul and George first played together with Ringo and that they acquired their iconic moptop haircuts. Just ten days after their last Hamburg concert in 1962, the LP Please, Please Me was released and took the world by storm.

Our guide will let you walk in the footsteps of The Beatles along Hamburg’s most sinful mile. 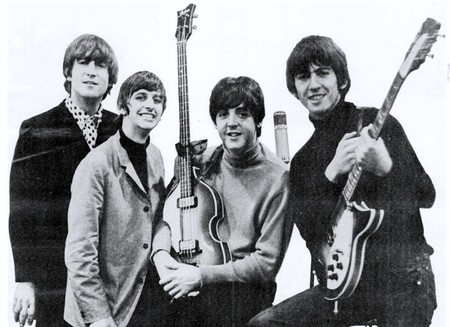 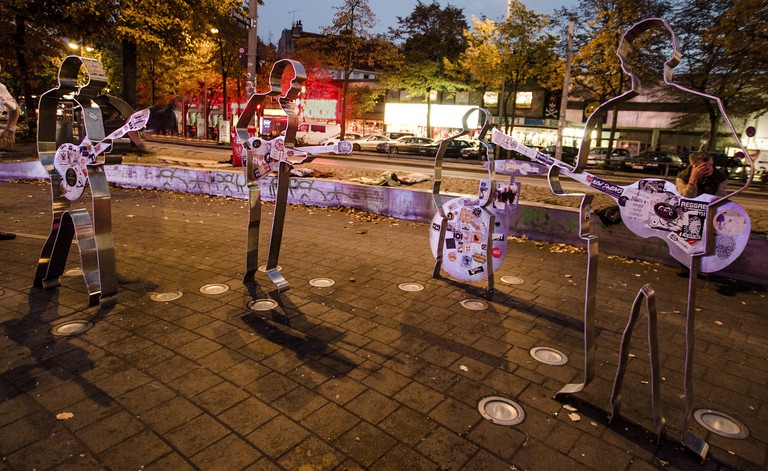 Beatles Platz | © Jose Luis Hidalgo R. / Flickr
On the corner of the Reeperbahn and the Grosse Freiheit lies the Beatles Square, commemorating the band’s Hamburg history. The circular, black-paved plaza is shaped like a vinyl record, and engraved titles of The Beatles’ most famous songs decorate its edges. On it, five life-size steel silhouettes of the musicians provide fans and passersby a unique photo opportunity. Yes, five—back in the early 1960s the band was composed of John Lennon, Paul McCartney, George Harrison, Stuart Sutcliffe and Pete Best. As the latter had been replaced by Ringo Starr in the last Hamburg concerts, the drummer statue is a hybrid of both musicians.
Open In Google Maps
174 Reeperbahn, Bezirk Altona Hamburg, Hamburg, 20359, Germany
+49630949950
Visit Website
Give us feedback 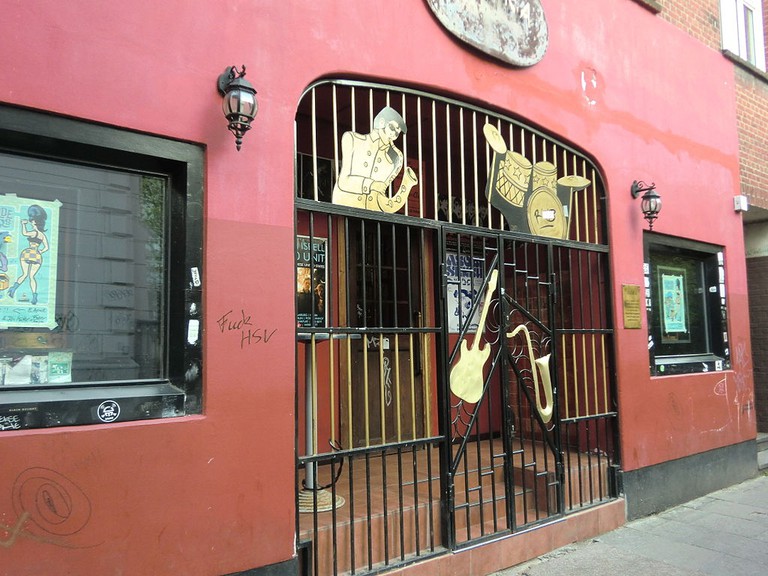 Indra Club | © Lipinski / Wikimedia Commons
The Beatles began their Hamburg stint on August 17, 1960, in the Indra Club, playing multiple sets a night and, allegedly, sharing the stage with a strip show. The music was mainly covers of their favourite tunes and requests from the drunken crowd. While in Liverpool, the guys were used to playing while standing still, in the Indra Club’s boss requested them to ‘macht shau’ – make a show. Today, the Indra is a popular dance and live music venue and enjoys the cult status bestowed by their role in The Beatles’ history.
Open In Google Maps
64 Große Freiheit, Hamburg-Mitte Hamburg, Hamburg, 22767, Germany
+4917624202105
Visit Website
Give us feedback

When the Indra Club had to close a few months later, The Beatles moved down the street to the Kaiserkeller. Here they shared the stage with Rory Storm & the Hurricanes, another Liverpool band whose drummer at the time was Ringo Starr. Here they also met the photographer Astrid Kirchherr, who took some of the band’s most iconic photographs, introduced them to a haircut popular among the Germany’s art scene and got engaged to Sutcliffe. The Kaiserkeller, now the bottom floor of the popular club Grosse Freiheit 36, remains a live music stage for young and upcoming bands. 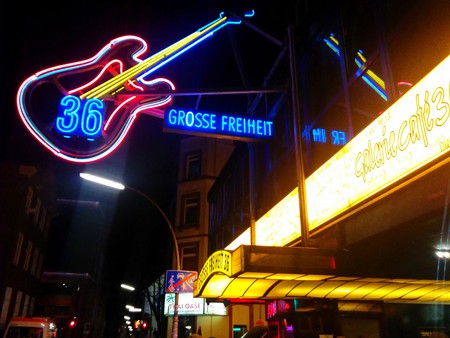 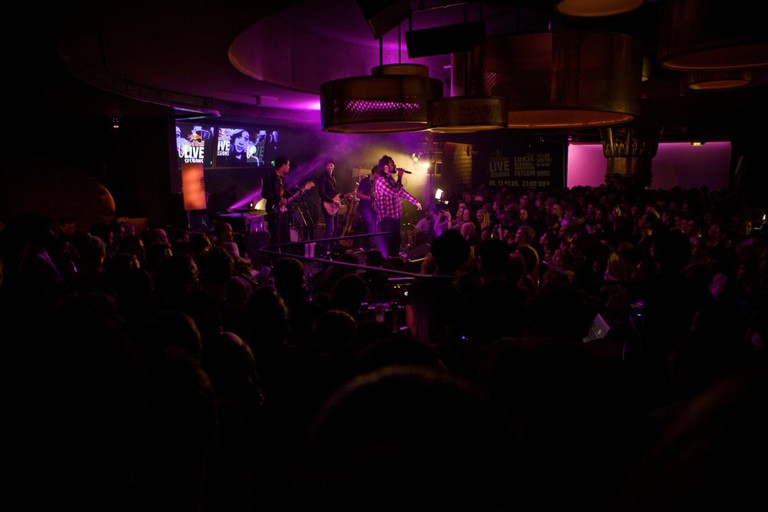 Concert at the Moondoo | © Florian Schüppel / Courtesy of Moondoo
The Beatles finally landed a better paid gig on the Reeperbahn itself in the newly opened Top Ten Club. Their former boss was not happy and notified the authorities that Harrison was underage, causing him to be deported. McCartney and Best followed a few weeks later after purposely starting a small fire in their former longings. In 1961, when Harrison was finally 18, The Beatles returned to play the Top Ten as a backing band for the British singer Tony Sheridan. The former hippodrome building has housed several clubs in the decades since. Currently it’s home to the chic Moondoo, where internationally renowned DJs play hip-hop, electronica and soul sets and live bands still occasionally take the stage.
Open In Google Maps
136 Reeperbahn, Hamburg-Mitte Hamburg, Hamburg, 20359, Germany
Give us feedback

Building, Music Venue
Facebook
Email
Twitter
Pinterest
Copy link
Share
Map View
Only a plaque remains where the Star Club, another famous venue that hosted The Beatles, once stood. They played here for almost two months in 1962, and by then Ringo Starr had already replaced Pete Best at the drums. The Star Club used to be a top live music venue, boasting performances by international stars such as Ray Charles, Little Richard, Jimi Hendrix, Cream and The Everly Brothers. The club closed in 1969, and the building burned down in 1983.
Open In Google Maps
39 Große Freiheit, Bezirk Altona Hamburg, Hamburg, 22767, Germany
Give us feedback

Pub, German, $$$
Facebook
Email
Twitter
Pinterest
Copy link
Share
Map View
One of the favourite hangouts of The Beatles, as well as other international musicians like Jimi Hendrix, was the Gretel & Alfons pub. Nicknamed the “beershop” by the young musicians, the rustic pub is a traditional St Pauli establishment that has changed little in the last decades, perfect for a taste of what the party area used to be like back in the day. Paul McCartney even lived here for a while in 1962 and left without settling the bills. Allegedly, he stopped by again in 1989 to pay off his 27-year-old debts.
Open In Google Maps
29 Große Freiheit, Bezirk Altona Hamburg, Hamburg, 22767, Germany
+4940313491
Visit Website
Give us feedback

One of the best ways to explore the Hamburg beginnings of The Beatles’ career is by taking a Beatles tour. There are several options, like the walking Beatles Tour and the bus Magical Mystery Tour. But the most widely acclaimed is the Stefanie Hempel’s musical Hempel’s Beatles Tour, which introduces The Beatles sights, stories and trivia, accompanied by their most famous tunes played on an ukulele. 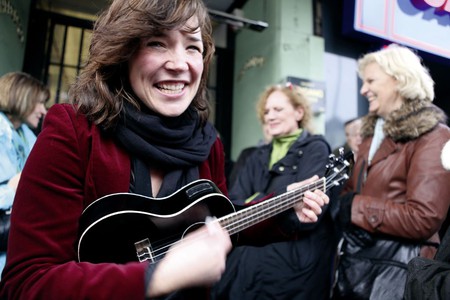