7 Things To Do & See In Boxhagener Platz

Boxhagener Platz or Boxi, appropriated by true Berliners, is a colorful pocket of Friedrichshain. It’s got its fill of bohemians as well as young families, a melting pot of fluid gentrification. Boxhagener Platz is just a patch of marketplace that serves as a catalyst for the web of culture in its circumference. These artisan soaked streets are littered with cool cafés, antique theaters, and markets for motley lovers. The needs of vegetarians, cinephiles, and outdoor lovers can be satiated and surpassed in this section of F’hain. We’ve garnered a list of the best things to do and see in this happening borough.

The Wochenmarkt or weekly market is the equivalent of a farmers’ market unbridled with fresh produce, sumptuous eats, and even Berlin’s first mobile cider. This friendly Saturday market delivers on just about every front. This market opens its welcoming stalls for all seasons, but its beauty can be felt the most during the warmer months. There is a real neighborhood charm amidst the alluring flowers and seasonal accouterments and no wonder because this weekly market has been going on for over 110 years. There is little left out at this all-encompassing food mecca; think eels, organic tofu made from German soybeans, fish smoked on the spot, fresh squeezed juices, Turkish olives, Italian sausage and more. The list is pretty endless. Starting at nine and closing around four, it’s the perfect way to casually stroll away a Saturday. 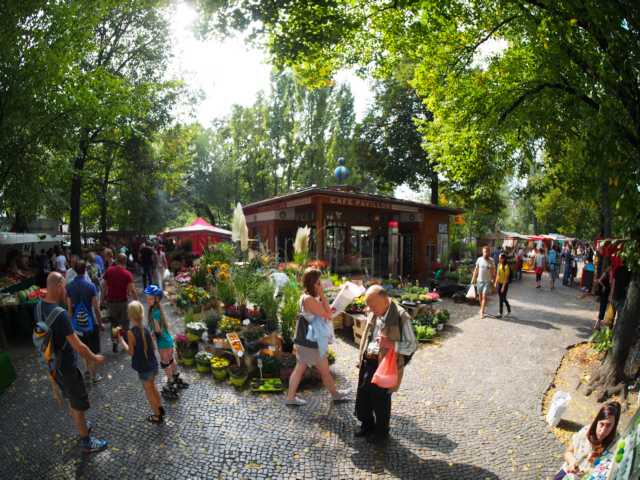 Just about every hood in Berlin has one of these tailored to their neighborhood. Flohmarkt or flea market is a great way to celebrate the idiosyncrasies of the neighborhood in style. Paying homage to its roots, it has immortalized the local vibe by showcasing handicrafts and vintage items from nearby inhabitants. There’s ample space to scale at this bazar of unique findings. Everything from art to antiques can be found at this neighborhood marketplace. The demographic is reflected in the flea market; Friedrichshain being comprised of heaps of young bohemians gets reflected in this marketplace, not in an overwhelming way, but there are a handful of local artist stalls selling their own creations. This Flohmarkt is a stellar patch to mosey through on a lazy Sunday afternoon between 10am and 6pm.

The name leaves little to the imagination of what this trendy eatery offers to its patrons, but Hot Dog Soup isn’t about mystery, it’s about these two simple yet easily elevated dishes. The owners behind this mega fun establishment display their level of mastery by taking these basic elements to the next level: think beetroot coconut soup and Hawaiian hot dogs. Their soups are seasonal and made fresh daily while their dog menu rotates as well, ensuring multiplicity. Even herbivores can find something to munch on this in haunt because Hot Dog Soup offers vegan dogs. This no frills place has limited seating, but you can just grab a dog to go and relax in the nearby Boxhagener Platz. Hot Dog Soup is about as straightforward and as mouthwatering as it gets. 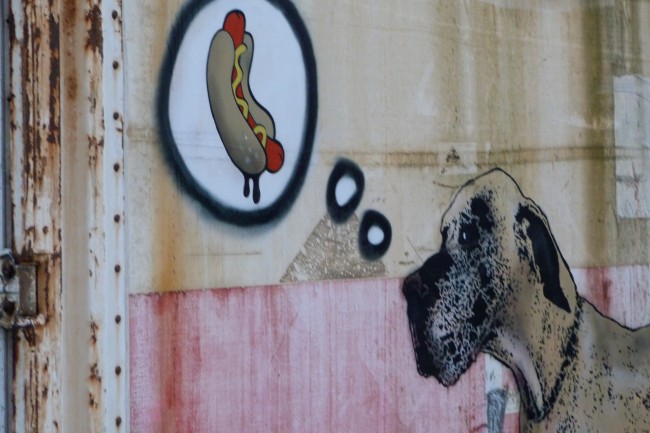 Not to be confused with the registration office (Bürgeramt), the cleverly named Burgeramt has a few tricks up its sleeve. These tricks are of the masterfully crafted meat kind rather than the occult kind. As the long lines suggest, this is a popular spot. Some loyal Burgeramt goers swear by it over any other burger in Berlin. There’s nothing fancy about the ingredients, but there’s something heavenly about the orchestra of all the components coming together. Lactose lovers can choose from an assortment of cheeses to blanket their patties. They serve their fries piping hot and coleslaw with just the right amount of tang. Good tunes often play in the background, which isn’t necessarily an integral facet of a proper burger joint, but speaks to the level of cool this eatery oozes. Burgeramt serves up well priced, colossal burgers that rarely disappoint. 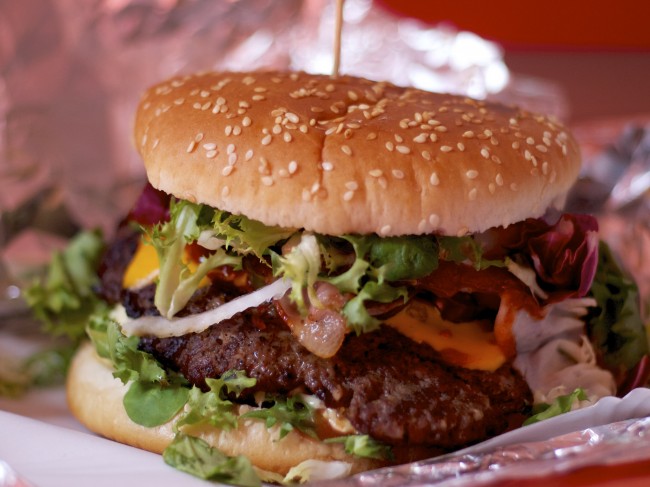 This tiny and funky café serves up third-wave level coffee in the cosy neighborhood of Friedrichshain. Here the service is rapid and amicable so its patrons don’t have to wait for their caffeine creations. Cute tables on the kitschy interior act as a nice watering hole to post up and sip the day away. The few tables outside make for perfect people watching. At extremely affordable prices, it’s entirely appropriate to load up on cappuccinos. The level of artistry that goes into every cup can be seen through their lactose delineations, there’s not just hearts on the tops of their lattes. Mokofuk dishes out delicious pastries and well portioned sandwiches for when hunger takes hold. 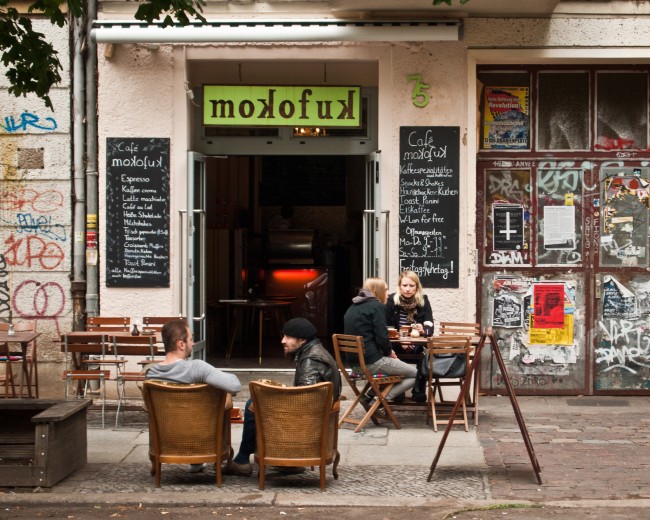 The craft beer scene in Berlin is starting to take shape. What was once an amorphous blob of untapped possibilities has slowly turned into a movement. Though beer here is not as ubiquitous as it is in the states, the few places that are starting to brew their own creations are pursuing their endeavors with aplomb and alacrity. Hops & Barley is an off-the-beaten path kind of brewery that amblers could pass if they weren’t paying close attention. Its owner and humble brewmaster, Philip Brokamp, has been in the game for a little over ten years now and doesn’t seem to be quitting anytime soon. The inside is reminiscent of a proper pub, albeit on the small side. The beers are superb and the menu rotates, guaranteeing freshness in flavor. For those who want to get a taste of the craft beer scene in Berlin, this place is a gem. 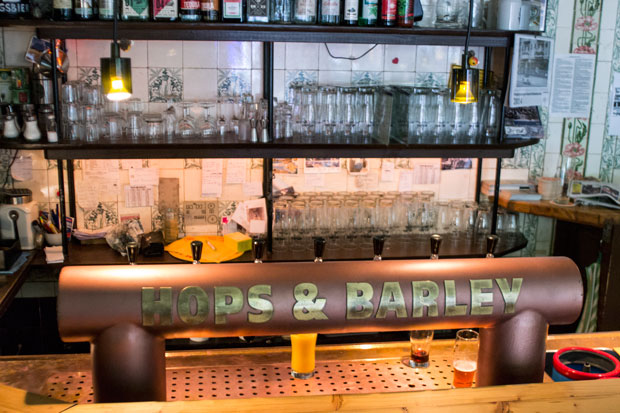 Courtesy of Hops and Barley

This small graffiti grazed theatre sits corner-side near Boxhagener Platz. With roots that date back to the early 20th century, its history is palpable throughout its interior, which nicely juxtaposes it’s contemporary exterior, riddled in urban modernity. Real cinephiles will appreciate the humility of this place. It’s a welcomed departure from the one-size-fits-all movie theaters that placate to the masses. Their movie selection is always on point with special attention to art house and foreign language films , but due to the size of the theatre don’t expect to see every film on your bucket-list. An cosy icon of Friedrichshain, this homey theatre is a favorite of the neighborhood and is worth a sit-down whenever in the area. A variety of treats and beers are on sale as well as coffees, in case film goers aren’t too keen on getting movie drunk. 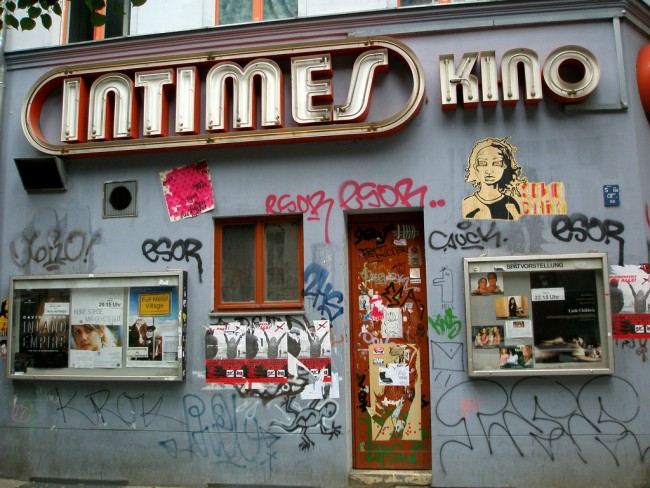