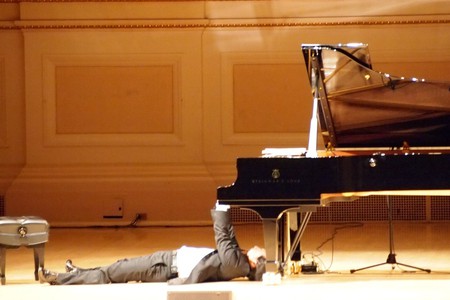 Humor on the stage is not a recent phenomenon. Mozart was said to be one of the most entertaining and hilarious characters in the classical music world — he loved to make fun of his biggest rival in Vienna, Salieri, and the conservative behavior that his audience used to display. Here are the funniest, present-day classical musicians.

Two of the craziest musicians out there with the goal to make people laugh and enjoy their concerts by re-arranging famous classical pieces on an utterly skilled level. Both classically trained, they met in London and soon discovered their passion for humor.

The grand master of humor and imitation giving a lecture on how to play a proper recital by interpreting Beethoven while perfectly imitating the exaggerated body expressions some piano players show on stage.

Vivaldi’s summer thunder storm in a sexy female combat — highly skilled classical musicians trying new ways of playing to outbid the others. Ever wondered if you can play piano behind your back while playing the cello? Well, here’s the proof.

Two classical cellists who want to be rock stars — sounds a little over the top? Their videos on YouTube have as many views as Coldplay, and they have played at the most important festivals and shows like The Ellen DeGeneres Show or the Riverside festival, adding that they have been working for quite some time with Elton John.

This is probably the funniest classical concert ever. Conductor Rainer Hersch is fooling around with the Royal Philharmonic Orchestra of London, making them do things they definitely didn’t think of when studying music at the university.

With the upcoming Star Wars movie that everyone is so excited to see, there had to be a flash mob at some point, and the renowned German Orchestra Westdeutscher Rundfunk definitely hit it with this one.

And last but not least, a nostalgic clip from childhood, and for most, it’s probably their first introduction to classical music.