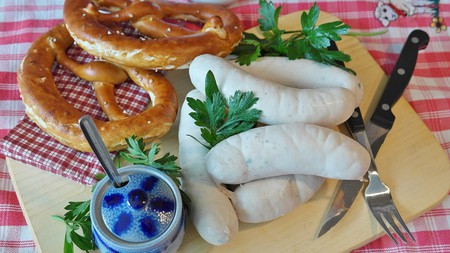 Germans love sausages – nothing new about that. But did you know that there’s a seemingly endless list of sausage varieties? They differ in ingredients, methods of preparation, ways of eating and how they’re served. We’ve made a list of seven of the best sausage specialities from across the country.

If you had to name one typically German food, chances are that Currywurst would come straight to mind. Statistics show that Germans devour a mind-boggling 800 million ketchup-and-curry sprinkled sausages every single year and snack-shop and diner owners compete to come up with more and more ideas to make their Currywurst creations the best. The evolution of the speciality has reached a point where you can now get beat gold-decorated sausages in Berlin. 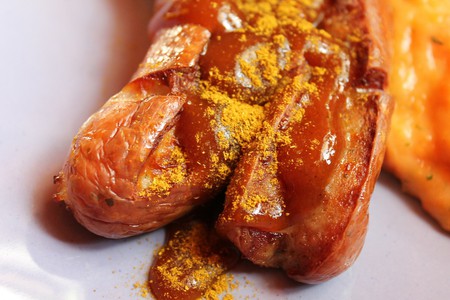 It's all in the curry sauce | © bykst/Pixabay

The popularity of this sausage speciality doesn’t stop at the borders of its state of origin, Thuringia, but instead claims one of the top ranking spots when it comes to a German’s favourite BBQ items. In fact, the 17th-century recipe is so good that it’s protected under EU law, just like other popular food items – Gouda cheese and champagne. Ground pork is seasoned with a mix of salt, pepper, cumin, marjoram and garlic and the lengthy sausages are then grilled over an open fire until the skin is brown and crispy.

If you’re headed to Bavaria, it’ll be next to impossible to avoid these white sausages. As a staple food in Bavarian kitchens, Weißwurst sausages are served all day round – as breakfast, snack, lunch or dinner items. Traditionally, minced veal and pork are mixed with onions, ginger, cardamom, parsley and lemon. To prepare them the stumpy sausages are scalded in water for up to 10 minutes. Professional Weißwurst fans use the ‘zuzel’ technique to devour the speciality which is a combination of biting the skin open and nibbling, sucking and pressing the meat out of it. Rookies are set to create an embarrassing mess and tend to just cut the skin open instead and then eat with a fork and knife.

Frankfurt’s most iconic sausages are made from pure pork and pressed into a sheep’s intestine which gives them the long, thin shape. The secret lies in carefully scolding the sausages for just five to ten minutes to prevent the skin from bursting. Once done, the no-fuss yet yummy sausages are served in a bun with a dab of mustard or alongside potato salad. You’ll often find them at birthday party buffets, markets or takeaway food stalls.

This chewy speciality requires a set of strong teeth. Widely popular in southern Germany, as well as Austria and Switzerland, the so-called Landjäger sausages are a go-to snack among outdoorsy people. The recipe varies from one butcher to the next, but they all share a few characteristics: the sausages are smoked, semi-dry, come in pairs, are pressed into a square shape and don’t need to be refrigerated. 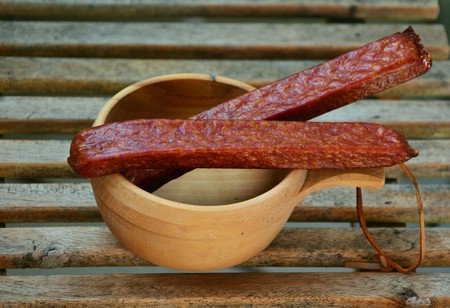 There are a few different Mettwurst varieties but generally the recipe is based on raw minced pork and garlic, which is either preserved by smoking or curing; they are known for their strong flavour. While Mettwurst comes in the standard sausage shape, the meat is spreadable and a popular sandwich topping. Other types are smoked for a bit longer, are harder as a result and can be sliced up and pan-fried.

Leberwurst, or liver sausage, is a popular food in most of Europe. Recipes vary but mostly involve pig or calf liver, veal and a spice mix of black pepper, allspice, mustard seeds, marjoram, thyme and sometimes onion and extra bacon. You’ll see Leberwurst served as a sandwich topping both for breakfast and dinner. 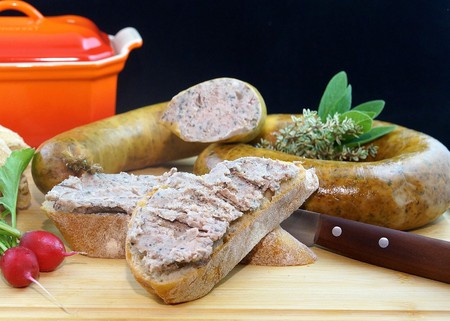