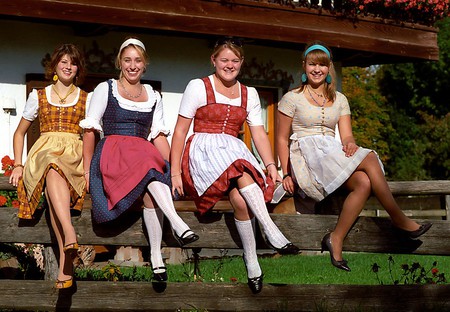 There is more to the German fashion scene than Karl Lagerfeld and Claudia Schiffer. Just as well, because it’s also no longer 1996. The 21st-century is the first blogging golden age and the media-heavy medium is perfect for presenting content for fashion and style. Here are seven German fashion bloggers worth following.

With 141k Instagram followers, 27-year-old Özlem Han-Dalman is taking the fashion blogging world by storm. She’s been covering the scene since 2009, when she got an SLR camera for her birthday. For her day job, Özlem works as a welding engineer. Fashionmonger is written in English and its styling is both beautiful and refreshingly original.

Dominic Schmitt is a costume designer living in Mülheim, Cologne. An accomplished tailor, Schmidt stitches men’s clothing such as bow ties, vests and jackets. His Tumblr of the same name is devoted to whatever vintage and vintage-adjacent fashion and lifestyle items catch his eye.

Cologne-based sneaker fanatic Sneakerb0b caught the sneaker bug early. Blame the Jordans he desperately wanted for his 10th birthday. From there, the obsession only grew until he amassed nearly 30k followers on Instagram and a thriving blog all about what’s new in Sneakerland. There are limits, however – according to Sneakerb0b, all sneakers that cost more than $1000 a pair are overhyped on the grounds that they are mostly ugly. AF1 Playstation, anyone?

Dani B. Uhrich, creator of Lady Blog describes her style as preppy, traditional and classy. Her favourite designers are Dorothee Schumacher and Salvatore Ferragamo. Come for the elegant, throwback style and stay for the gorgeously dreamy and inspiring shots of Dani and her daughter.

Trend scout Julie Richter has been writing A Personal Style from Munich and around the world since 2011. Her philosophy is that the price tag or label are not important as a status symbol. What matters, and what makes interesting subjects for her blog, is people who know what they want to express and dress consciously in order to do that.

While Christine Neder was studying to be a fashion designer, she realised she was terrible at sewing and was much better suited to writing about fashion. Lilies Diary, her fashion and travel blog, has a plethora of beautiful pictures of beautiful people beautifully styled in exotic locations. Sumptuous is the word, but it also covers practical things like comparing the best hiking boots.

“It would be a pity to confine myself to only one style,” says bekleidet creator Jana Wind on her site. “I love to change my clothes as often as my mood, which is every hour.” A full-time fashion blogger, Jana is constantly in a new place. Doesn’t matter if she’s in Morocco exploring souks, NYC for Fashion Week or following up a tip, her 975k Insta fans get to come along for the ride.

In spring, at the end of the day, you should smell like dirt. – Margaret Atwood