Berlin skyline | Pixabay
It’s hard to keep track of all the ins and outs, stats and facts about a city as fickle and fluctuating as Berlin. Always in constant flux, Berlin is a hodgepodge of culture and influences from all over the world, creating a unique pool of unusual phenomena. From the funny to the freaky, here are some things about Germany’s capital you’ve probably never considered.

Berliners aren’t really a settled bunch, and the fact that almost 20 people move to a different neighbourhood every hour proves it. It’s no secret that trying to find long term accommodation in Berlin is a bit of a nightmare, so this might be why people have no choice but to be urban nomads. No wonder you can never find a moving van in Berlin, they are always booked up!

There are more comers than goers

Not only are people moving around the city at a dizzying rate, there are around 435 newcomers to Berlin each day and only 327 who have packed up their bags to leave. That means over one hundred more people move into the city than move out each day. No wonder finding a place to live seems impossible.

It has an outsize international population

An estimated half a million people living in Berlin come from somewhere outside of Germany. That’s right, you and your expat cliques from 185 recorded countries make up about 14% of the city’s population. Berlin is truly multi-cultural, with half a million foreigners making a home here.

Berliners are hooked on Döner and Currywurst

This fact is slightly disturbing to say the least. On average across Berlin’s innumerable kebab shops, it is said that 950 meat spits are consumed daily. Each spit weighs about 63 kg, making that a whopping 60 tonnes of meat being scoffed every day. It makes you wonder where it all comes from! To add to the meat fest, about 70 million Currywursts are gobbled down each year. And this is a city with a huge vegan population!

It has a massive public transport system

Just to give you a true sense of the size of Berlin and the scale of its public transport system, someone took the trouble to calculate that altogether, Berlin’s buses, trains and trams travel a mega distance each day that is the equivalent of going around the earth 8.7 times.

Around the world 8.7 times a day © Pixabay

It is overrun with butts

Here’s a wacky fact about Berlin – more than 2.9 billion cigarette butts are thrown into the streets each year. Berlin was considered ahead of its time when it banned smoking in the street in 1848. That law has long passed, and now Berlin is actually one of the few cities in Europe where smoking in bars and indoors is allowed.

Too many butts to care © Pixabay

Graffiti gives Berlin its gritty aesthetic and edgy appeal, and in an ironic twist, it costs the city a massive chunk of cash as they keep trying to clean it up. It seems a futile undertaking since taggers aren’t going anywhere anytime soon, yet in some cases we’re all better off when the dirt has been removed.

While most countries in Europe depend on their capital cities to bring up their economy, Germany would be an average of 0.2% wealthier without its own capital. After the Wall came down, the once divided Berlin had to figure out a way to raise its other half to an equal footing with the Western half. The unemployment rate in Berlin is higher than anywhere else in the country and, in 2015, Berlin received more subsidies than any other part of Germany.

Berlin only narrowly won its capital status back

Berlin had been the country’s capital as far back as the Prussian empire. After the Second World War when the country was split between East (German Democratic Republic) and West (Federal Republic of Germany), Bonn was elected as the capital of West Germany. After the Wall came down, there was a big debate whether Bonn should retain its capital position or if Berlin should reign once more. After unification, the German Parliament continued to meet in Bonn until a narrow vote put Berlin back on its throne. Berlin won by a mere 17 votes, and now Bonn is officially the federal city and second place to Parliament housing.

Ever notice the adorable hat and gesture of the man in green or red on the Berlin pedestrian traffic light? The symbol is actually an East German Ampelmännchen, which literally translates to “little traffic light men” – so cute. The design is originally from Berlin, which explains why many Berlin t-shirts celebrate this symbol as a Berlin icon.

Luise von Mecklenburg-Strelitz, also known as Queen Louise, was the Queen of Prussia, wife of King Frederick William III, and mother of nine children, two of them being Frederick William IV of Prussia and German Emperor Wilhelm I. She was famous for her beauty and her generosity, and her interest in and support of her people is one of the many reasons for her notorious popularity. When Napoleon defeated Prussia, she personally approached him and asked him, with honor, to spare her land and people. She died very young and later became a Nazi symbol for what the perfect German woman should look and behave like. Her tomb can be found in the Charlottenburg Palace Gardens. 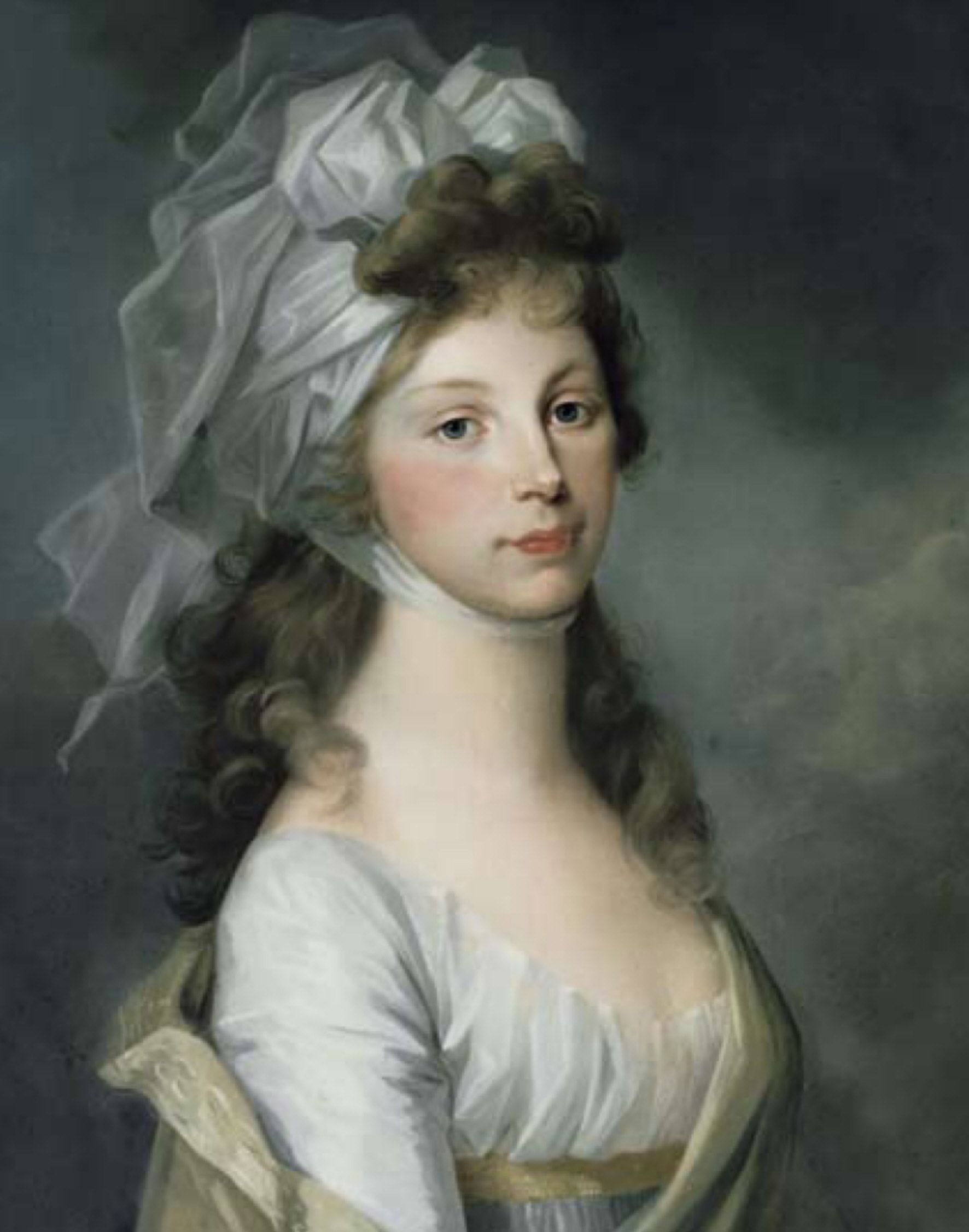 Portrait of Queen Luise of Prussia (1776-1810) by Henriette Félicité Tassaert, via Wikimedia Commons