Gerhard Richter 'Abstraktes Bild (947-3)' | © Gerhard Richter 2017/Dresden State Art Collections
Known as a city of art and architecture, Dresden offers visitors to Germany a wealth of attractions, from sensational Baroque buildings through to Gerhard Richter‘s Abstract creations. We’ve selected from the city’s museums and galleries, as well as festivals, history and culture, to bring you the ultimate must-visit list when in Dresden.

Head to the Gemäldegalerie Alte Meister (Old Masters Picture Gallery) in the extensive Zwinger palace complex (see below), and study the most famous view of Dresden – Canaletto’s Dresden Seen From the Right Bank of the River Elbe Below the Augustus Bridge. This 18th-century masterpiece from the Venetian great portrays the city’s Baroque gems in all their glory, before they were destroyed in the February 1945 bombings during World War II. Then go to the right bank of the Elbe, near the Augustusbrücke to the spot where Canaletto’s view was conceived, and look across to the new-old cityscape.

Canaletto’s Dresden Seen From the Bank of the River Elbe Below the Augustus Bridge, 1748 | © Elke Estel/Gemäldegalerie Alte Meister/Staatliche Kunstsammlungen Dresden

From 1485, the Wettin royal family lorded it over Saxony from the Residenzschloss (Royal Palace) in central Dresden. Similar to so many historically and architecturally significant buildings in the city, it was hugely damaged during the Allied bombing and was fortunate to survive demolition after 1945. Check out the Green Vault (Grünes Gewölbe), one of Europe’s most renowned collections of treasures and artefacts. 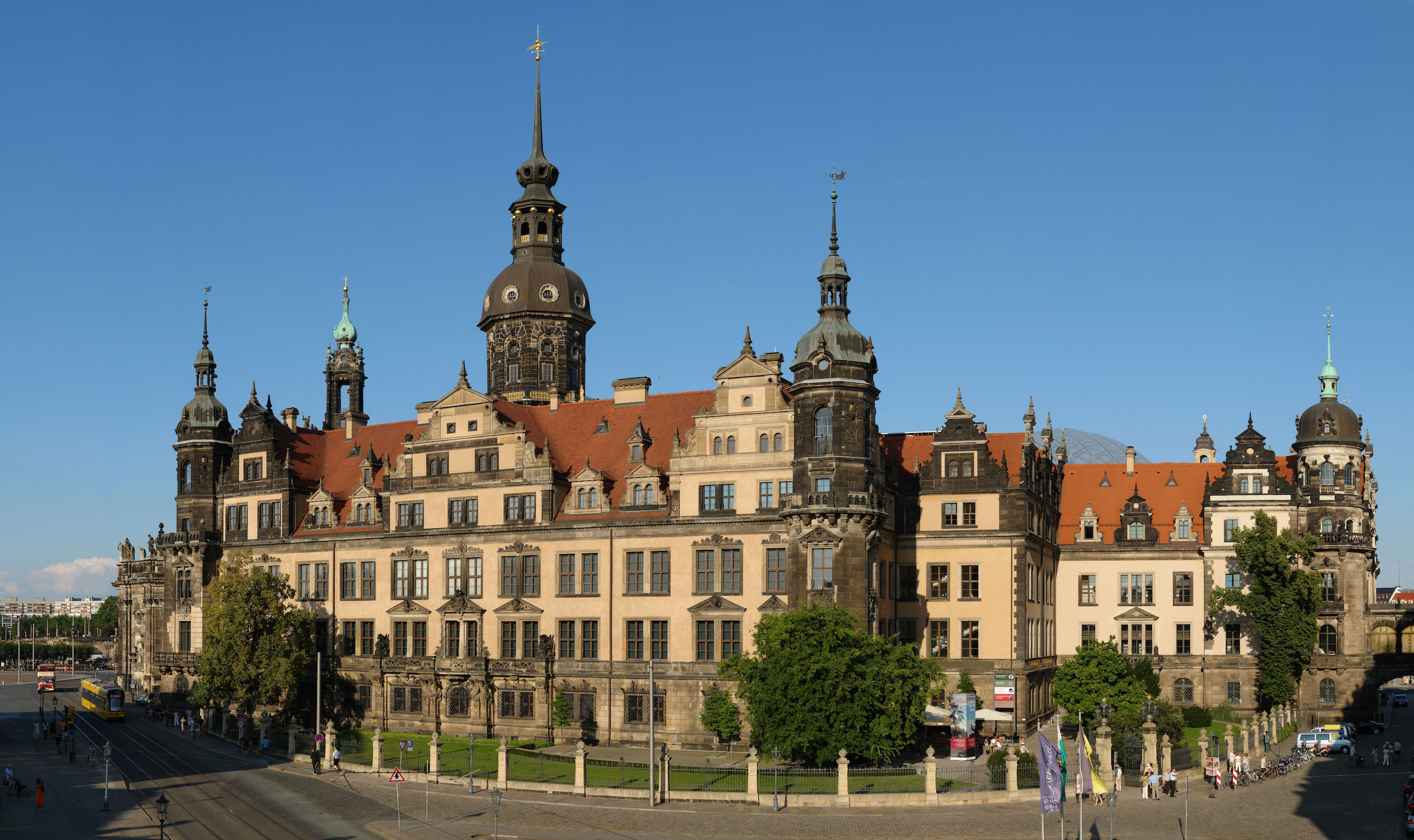 Dresden’s Royal Palace, which dates back to the 15th century as home to the royal family | © Kolossos/WikiCommons

If you’re in Dresden for even a short period, there is a chance you’ll happen upon a festival or two during your stay. The International Dixieland Festival Dresden will hit its 48th edition in May 2018 and continues to be a major success – claimed to be the largest ‘old-time jazz’ festival in Europe, it features bands from across the planet. Fans of more modern jazz will enjoy the several-week November Jazztage festival.

Another major annual marker on the calendar is the Dresden Stadtfest city festival, also known as Canaletto, which celebrates the foundation of Dresden. It takes place in the third weekend of August and features thousands of artists, attracting more than half a million visitors. Favourites are the arts and crafts from the Middle Ages, jousting tournaments, musical events and – of course – the obligatory fireworks.

As one of Europe’s most historic and renowned centres of music, a visit to Dresden isn’t complete without heading to the Semper Opera, also part of the Zwinger complex. Before being chased out of Saxony for his revolutionary beliefs, Richard Wagner premiered some early works in the city, and his – and other great composers’ – works feature regularly. 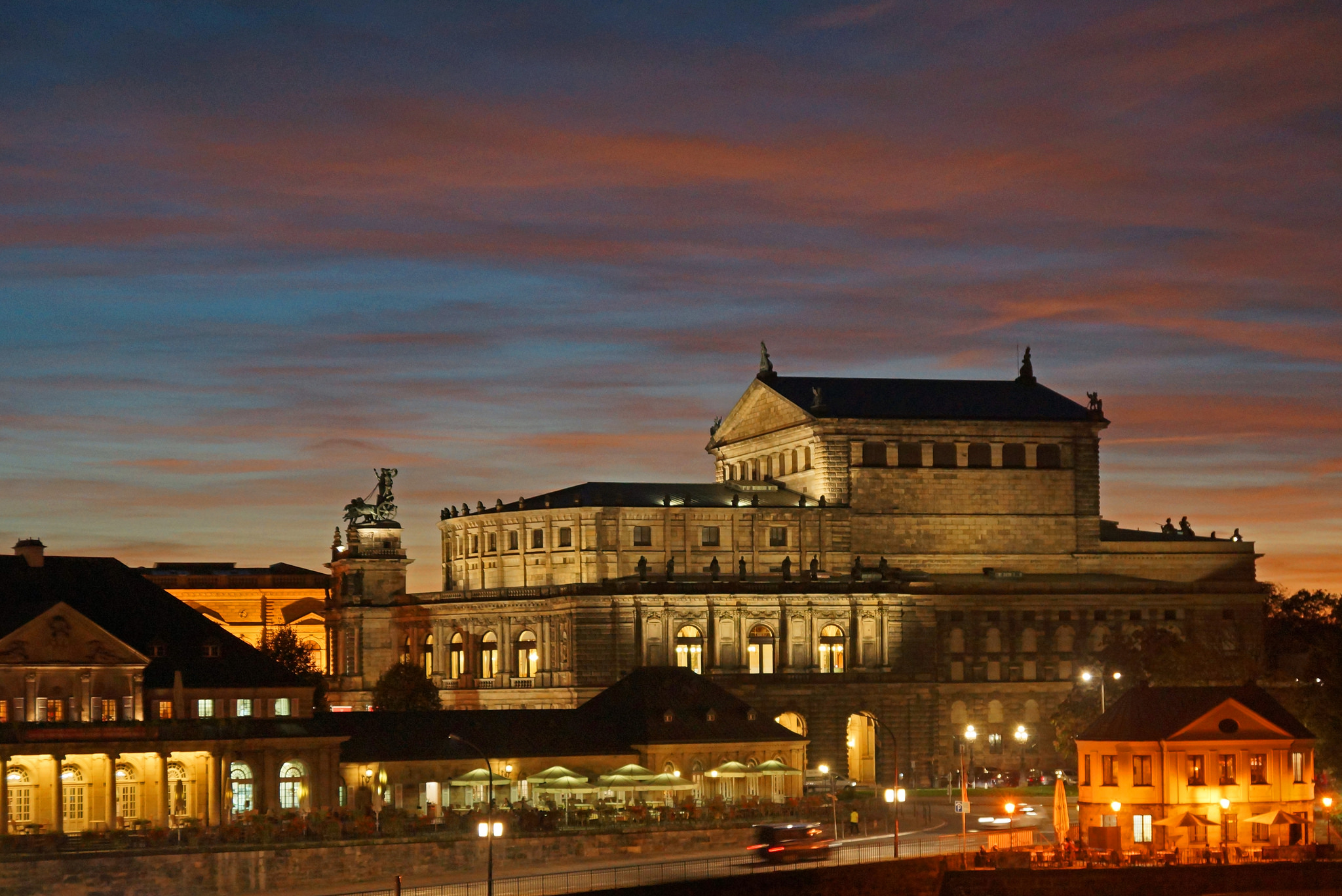 Started under Saxony’s most famous ruler, Elector August Friedrich I, the Baroque style Zwinger palace complex has been dubbed one of the greatest ‘complete works of art’ ever created. Constructed to house culture and entertainment for the Dresden Court, it was later rebuilt after wartime destruction. As well as the Semper Opera and the Old Masters Picture Gallery, there’s also a Mathematical-Physics Salon (Mathematisch-Physikalischer Salon) much-loved by techies. Take your time with the art collection, as there’s everything from Raphael to Rubens … and that Canaletto. 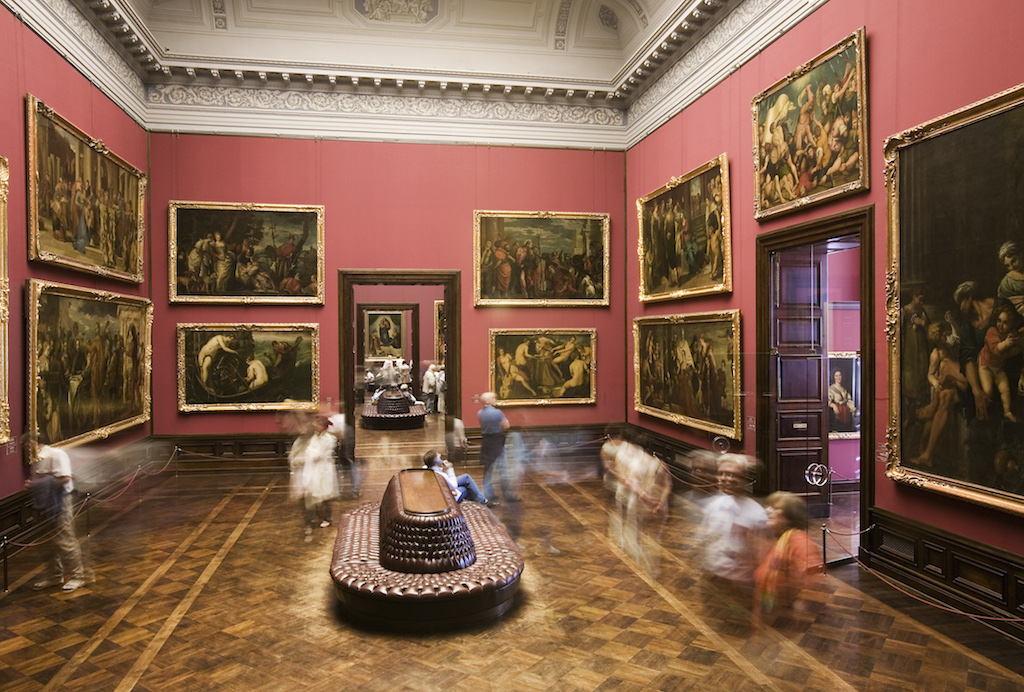 Gerhard Richter at the Albertinum

Born in Dresden in 1932, artist Gerhard Richter was fortunate that he was too young to fight in World War II. However, the hardship of Nazi period, including the war years and their aftermath, shaped him and his work. Dresden’s New Masters Gallery (Galerie Neue Meisters) in the Albertinum museum holds the Richter Archive, and shows a selection from this modern master. There are also works by Monet, Caspar David Friedrich and Degas, among other art greats. 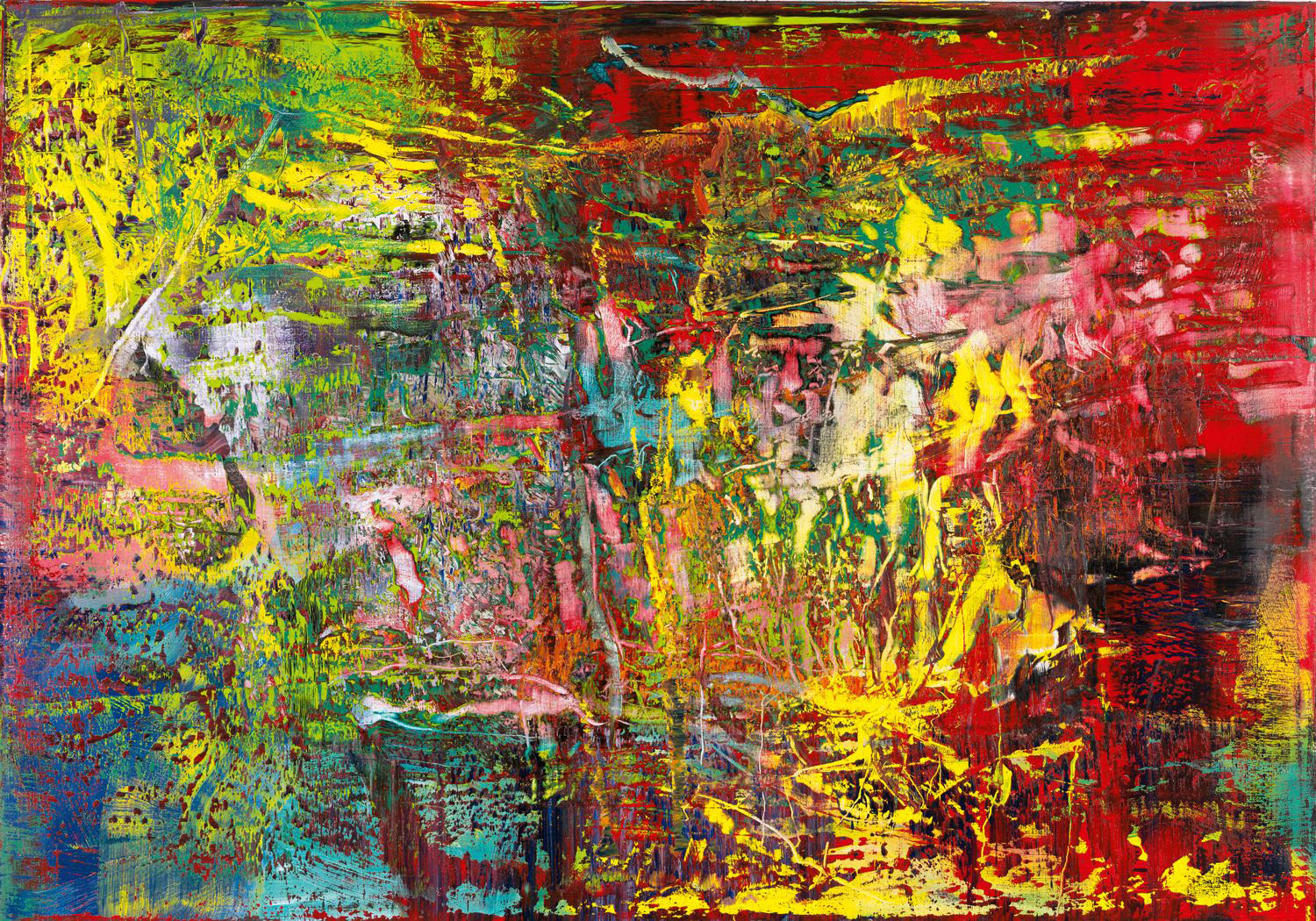 Having taken place a grand total of 583 times, the annual Dresdener Striezelmarkt claims to be the oldest Christmas market in the world still running. It opens at the end of November and continues until Christmas Eve, and contains a whole host of Christmassy events, from carol singing through to an award ceremony for a Gingerbread Queen. While in the Altstadt (Old Town), buy a Dresden Christstollen, the cake which gives the market its historic name: ‘struzel‘ or ‘striezel‘ is old German for this long, baked yeast product crafted into a woven shape.

Like most of the best big-sized cities in Germany, green spaces are vital for quality of life. Dresden is blessed with a number of parks and other green areas, with the Großer Garten the best and largest amid the hubbub of the city and within touching distance of the Altstadt. As well as sports arenas, palaces, art and lakes, there is the German Hygiene Museum and the Botanical Garden. 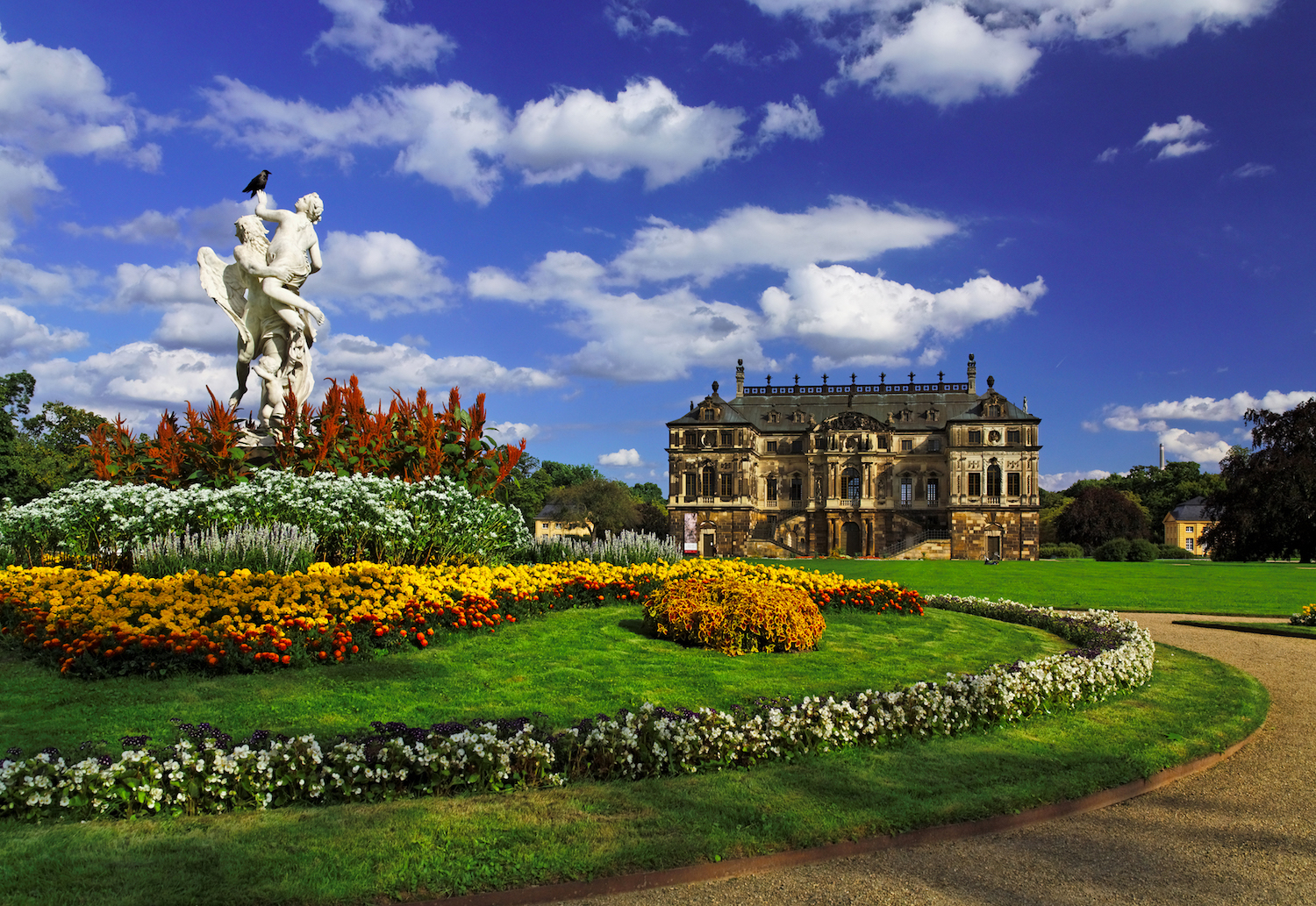 On April 28, 2017, the long-planned renovation of Dresden’s Kulturpalast arrived, though in fact it was actually something of a second coming. The Kulturpalast is considered an iconic piece of East German communist-era architecture and was first opened back in 1969. Its recent modernisation includes a new concert hall, and is home to the city’s philharmonic orchestra, as well as the city library.

Kulturpalast, a relic of communism, renovated and reopened in 2017 | © Nikolaj Lund/Kulturpalast Dresden

The World of the GDR

Communism reigned in the former German Democratic Republic (GDR, but DDR in German) across five decades, and its legacy continues to affect politics and culture here. The notion of ‘Ostalgie’ is often thrown at people who grew up under communist rule, who get positively nostalgic about the period. True or not, visitors to Die Welt der DDR museum don’t have to have experienced real-life communism to enjoy a fascinating glimpse of what life was like in Dresden between 1945 and 1989.

Synagogue
Dresden's New Synagogue | © Christoph Münch/dresden.de
In 1938, thousands of Jewish buildings across Germany, including many synagogues, were destroyed by the Nazis. Of the many rebuilt in recent decades, Dresden’s is one of the best in the former East Germany.
More Info
Open In Google Maps
1 Hasenberg, Altstadt Dresden, Sachsen, 1067, Germany
+493516560710
Visit website

Carrying the moniker of ‘the Balcony of Europe’, Brühl’s Terrace was one of the hot locations for the educated and rich for centuries. Just like today, they came to stare at the cultural wonders of baroque Dresden from this terrace above the waters of the River Elbe. 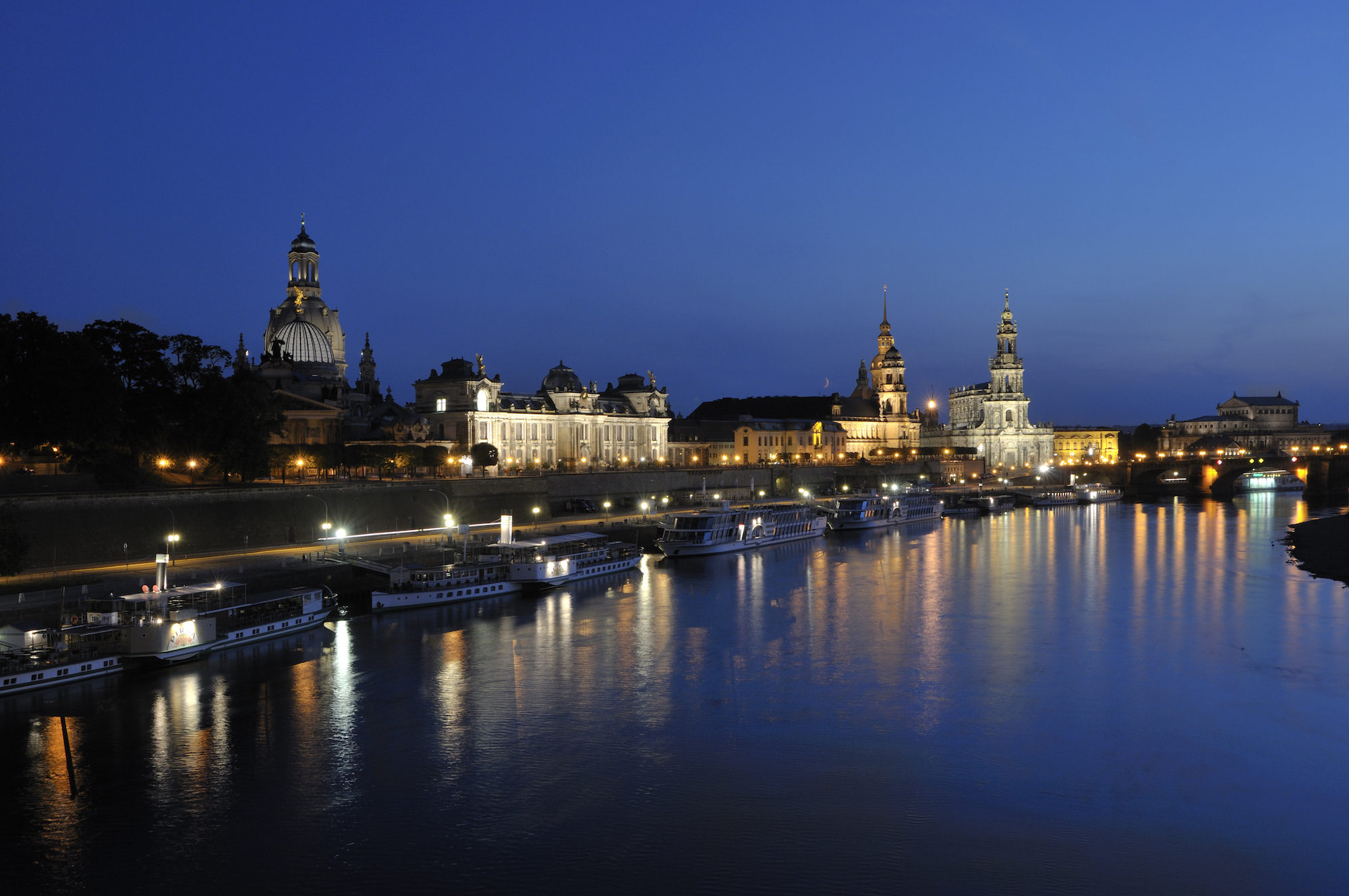 Brühl’s Terrace, with silhouette of the Kunstakademie, Frauenkirche and Cathedral at night | © Frank Exß/Dresden Tourist Office

Festung Dresden is a fortress situated beneath Brühl’s Terrace, and includes some of the oldest still existing Renaissance parts of the city. Opened to the public back in 1814, the vaults, casemates and a surviving city gate attract many visitors every year. The interior is undergoing refurbishment at the moment, and is due to re-open next year with the exhibition ‘Splendor. Tears. Disaster. Closer than ever‘ outlining more than 450 years of history.

Cathedral
Gottfried Silbermann's rebuilt organ in Dresden's Hofkirche | © Olivier Bruchez/WikiCommons
The Hofkirche is the city’s wonderful Catholic cathedral and has been an architectural gem of the cityscape since the middle of the 1750s. It’s also home to the remains of many members of the royal family and an 18th-century Gottfried Silbermann organ.
More Info
Open In Google Maps
24 Schloßstraße, Altstadt Dresden, Sachsen, 1067, Germany
+493514844712
Visit website

If you want to see how some of the richest people in the world lived in the 1920s and 1930s, have a stroll around Loschwitz, a Dresden suburb. It’s packed with villas and there is a rare funicular railway with a great view of the valley below. 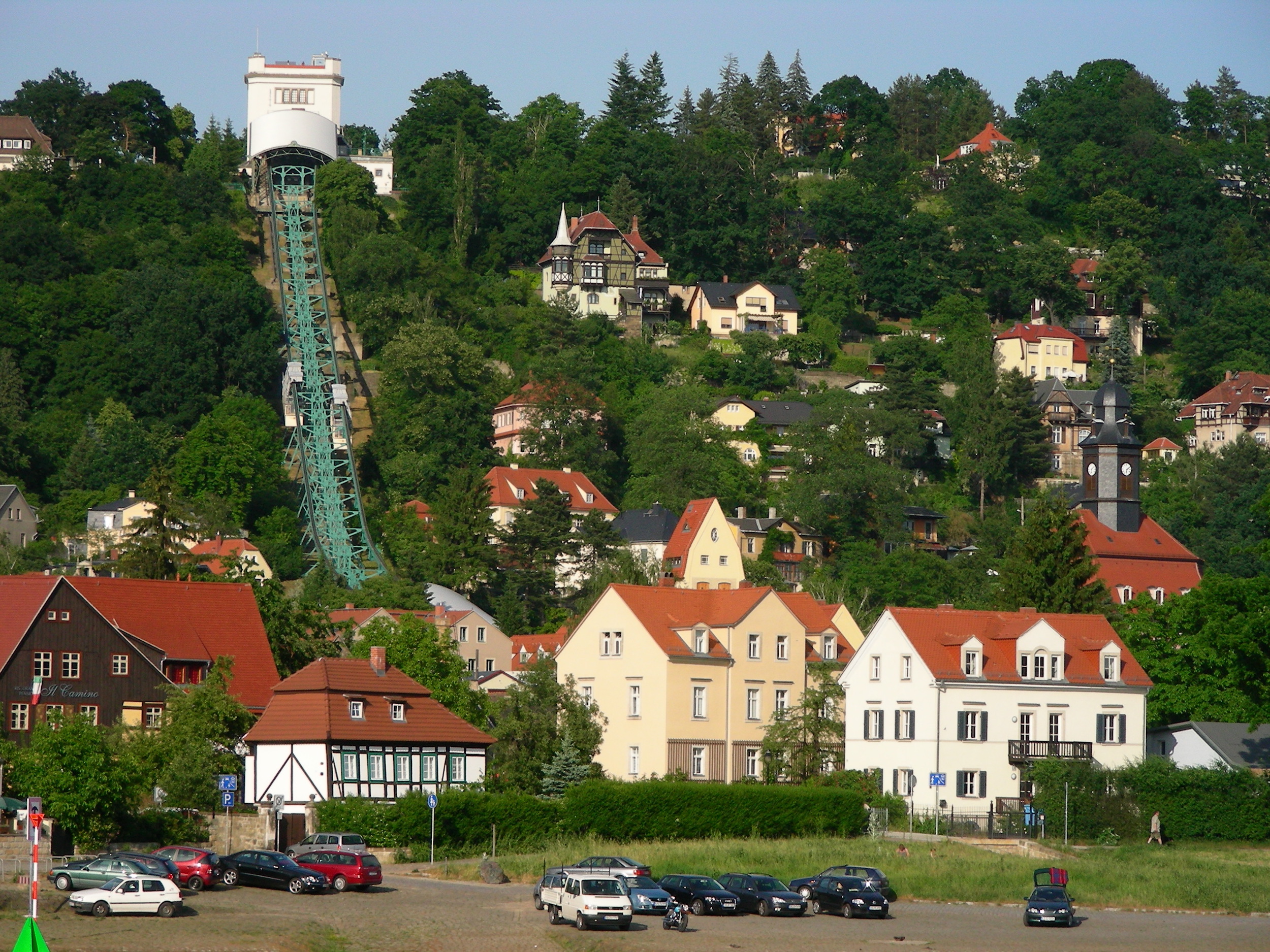 Bridge
Steamboat with the Blue Wonder bridge behind | © Sächsische Dampfschiffahrts GmbH & Co. Conti Elbschiffahrts KG / dresden.de
The Blue Wonder Bridge is – as its name suggests – a wonder of engineering in the aforementioned Loschwitz area of town. Built in two years at the end of the 19th century, this iron and steel bridge stretches 141.5 metres (464 feet) across the River Elbe and leads to huge meadows that give the city a green heart.
More Info
Open In Google Maps
Loschwitzer Brücke, Blasewitz Dresden, Sachsen, 1326, Germany

The Frauenkirche Baroque church was all but destroyed during World War II, and was for decades left as a vivid reminder of the destruction of war. Recently rebuilt, not to universal approval because of its anti-war ruined symbolism, it is a focal point of the city’s ever-evolving new and rebuilt Neustadt. 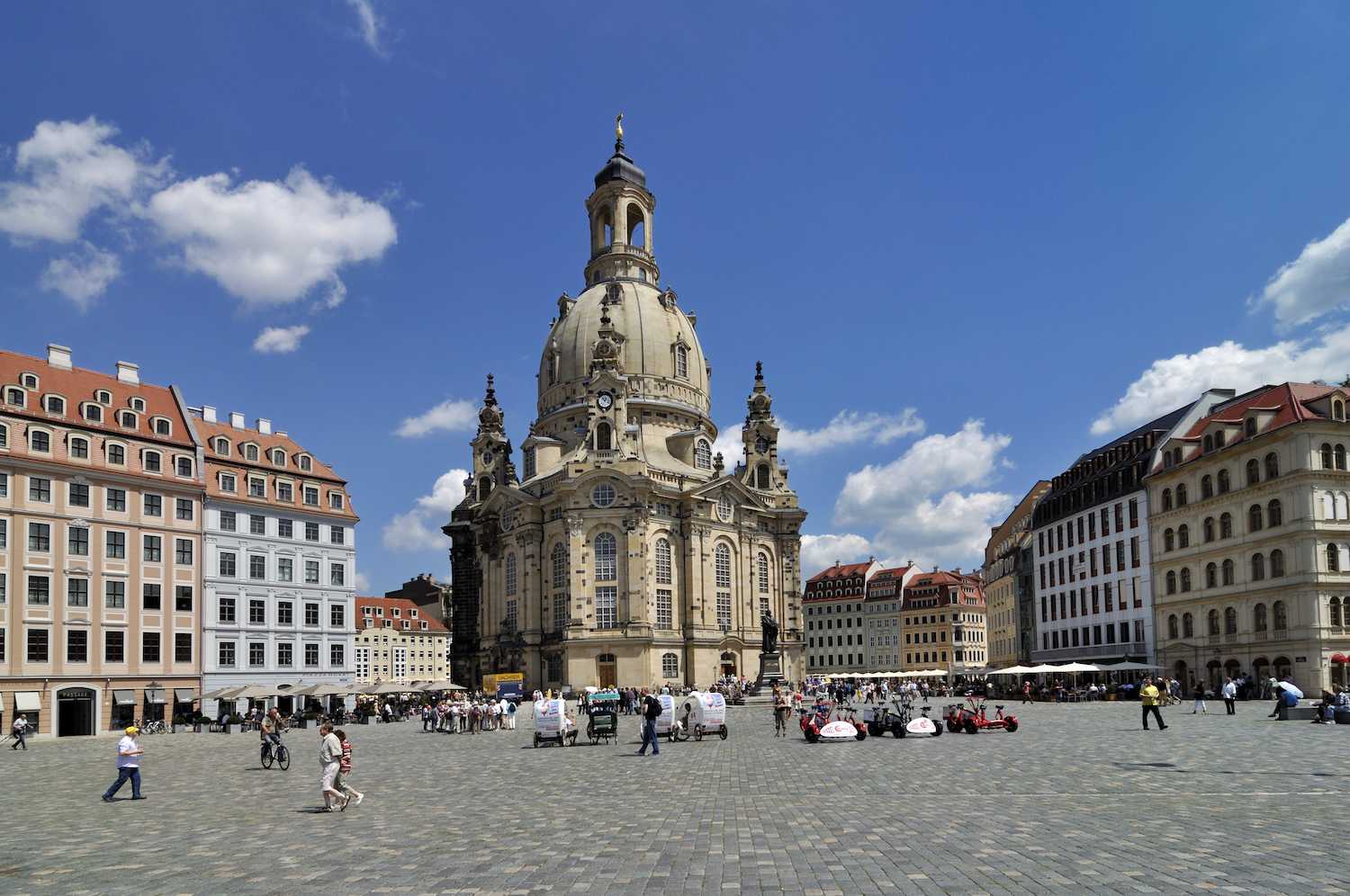 The Meissen porcelain manufacturer is nowadays actually around 26 km (16 miles) from Dresden but it started life within the old city. Dresden was, of course, home to the first Europeans to discover the secrets of hard-paste porcelain, and the prestige of its producs continues to the present day. 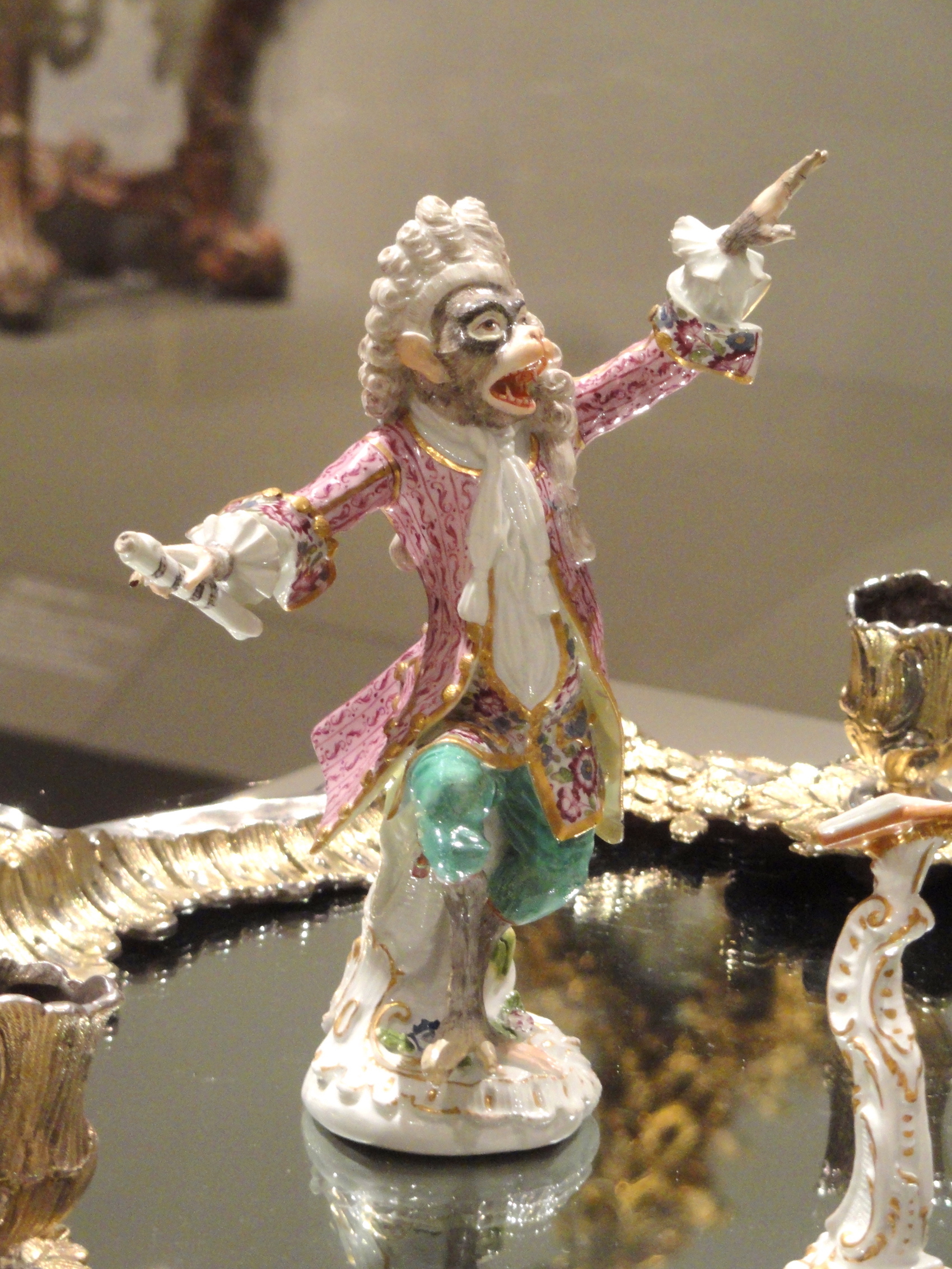