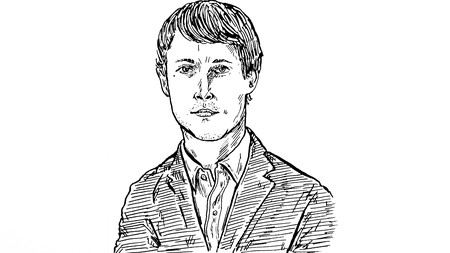 As part of our “20 Literary Translators Under 40” series, we interviewed German language literary translator Kurt Beals.

Read: “The Mouse,” a short story by Regina Ullmann

What are you currently translating?
At the moment I’m taking a brief hiatus from big translation projects to finish my own book, which looks at Dada poetry in relation to the history of the telegraph (it’s tentatively titled Wireless Dada). But once that project is wrapped up, I do hope to get back to translating more actively. The most recent translation I did was a non-fiction text by Nora Bossong about her visit to New York, where she interviewed refugees and asylum seekers. I’d previously translated an excerpt from her novel Gesellschaft mit beschränkter Haftung (Limited Liability Company), and Refugees Worldwide asked me to translate her new text right after the presidential election, so I made an exception to my hiatus, since her text was so timely.

What approach or procedures do you take when translating?
My approach varies depending on the text, but I can tell you one point where I suspect I differ from a lot of translators. When I’m translating a longer text, especially prose, I generally do a very rough first draft fairly quickly, without stopping to research difficult terms, allusions, etc. If there are words or phrases that I can’t translate to my satisfaction the first time through, I just mark them with a highlight or a comment and keep going. Once the first draft is done, I can return to those difficult passages and devote more time to looking up terms, tracking down references, etc. I think there are two main reasons I do it that way. First, if I’m translating a 300-page book and I get hung up on a tough passage on the first page, it’s easy to feel like it’s an insurmountable task and I’ll never finish. But if I’ve already finished one draft before I dive into the details, then at least I know that I have something there, so that gives me the freedom to spend as long as I need to teasing out the messy passages. Second, it’s easier to keep the tone and style consistent if my translation process itself is relatively fluid, and not broken up into little chunks. Of course I revise everything over and over before I get to a final draft, but a quick rough draft gives me a good framework to build on.

What kinds of works or regions do you gravitate toward?
I translate from German, but within the German-speaking world I don’t have any strong regional inclinations—of the books I’ve translated, one was by Anja Utler, a poet from southern Germany who lived in Vienna at the time, one by the Swiss author Regina Ullmann, and one by Reiner Stach, a biographer based in Berlin. So there’s not much of a unifying thread there. I’ve been fairly promiscuous in terms of genre, too—a book of poems, a book of short stories, and Stach’s Is that Kafka?, which combines texts of several different genres (biography, letters, some of Kafka’s literary texts, etc.). But generally what draws me to a work and makes me want to translate it is the sense that the author is doing something with the language itself that I haven’t seen before, something that will be challenging to reproduce or approximate in English. I like translation projects that require some linguistic ingenuity.

Who or what are some untranslated writers or works that you would like to see in English? Why?
Quite a few of the older experimental texts that I work on in my research have never been translated, and I’d love to see more of them made available to English readers—e.g. the Dada periodicals that were published in the late 1910s in Zurich, Berlin, and elsewhere. But that would be an enormous undertaking—the texts were designed to be ephemeral, so they’re full of very specific allusions, inside jokes, the occasional coded message, and sometimes pure play with letters and sounds. To me they’re a sort of limit case for translation. I’m not sure if any single translation could do them justice, but they raise all sorts of interesting questions. Another experimental text which I’d like to try my hand at some day is a very slim book from 1963 by Max Bense called Vielleicht zunächst wirklich nur: Monolog der Terry Jo im Mercey Hospital (Maybe at first really just: Monologue of Terry Jo in Mercey Hospital). Bense uses a mix of Concrete poetry, computer-generated text, some pseudo-autobiographical prose, allusions to Lewis Carroll, and various other devices to tell the true story of a girl who survived an incident in which her family was killed at sea. It combines so many interesting experimental techniques, it would definitely be a challenge, but I think I’m up for it.

What are some of the more interesting literary developments happening in the language or region you translate from?
Since I’m especially interested in poetry, I’d say one very positive ongoing development is the active poetry scene in the German-speaking world, especially but not only in Berlin. Presses like KOOKbooks, luxbooks, Edition Korrespondenzen, and roughbooks are publishing some really great work, there’s an active poetry reading scene, and the Poesiefestival in Berlin draws a crowd every year that most cities couldn’t begin to compete with.

What is a recent translation challenge you faced?
Titles are always hard. You want them to be concise, you have convey certain relevant information, but you also just want them to work as titles and make the right impression. Stach’s book is my most recent published translation, and the challenge there was in the subtitle, “99 Fundstücke.” In English we settled on “99 Finds,” which is what a dictionary would tell you “Fundstücke” means, but the German word more specifically calls to mind archaeological finds, discoveries, something that’s been buried or forgotten and then dug up, more like an artifact. But we couldn’t call them “artifacts” in English, because it would have sounded like a book about objects from Kafka’s life, not an assortment of texts, anecdotes, photographs, etc. So in the end we settled on “Finds,” even though it doesn’t quite capture all the connotations of the German, because we just couldn’t come up with a single word in English that did. (Though if you have any suggestions, let me know.)