12 Things You Didn't Know About Hamburg 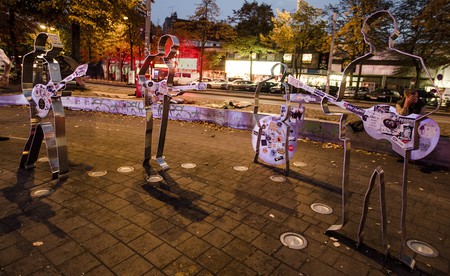 Hamburg may be only the second biggest city in Germany but in many ways the Hansestadt is second to none. From unique welcomes of arriving ships to the invention of beloved Christmas traditions, some of these 12 little-known facts about Hamburg might even surprise the locals.

Every ship receives a special greeting

Downriver from Hamburg, in the town of Wedel, lies the Willkomm-Höft – a “welcome point” for ships arriving at, or leaving the port of Hamburg. Every day more than 50 ships are welcomed here by playing the national anthem of the country where the ship is registered, or bid farewell by hoisting the signal flag UW to wish departing ships bon voyage. The six welcoming captains who man the welcome point can choose from a collection of 152 national anthems and recorded greetings in the language of every seafaring country in the world. 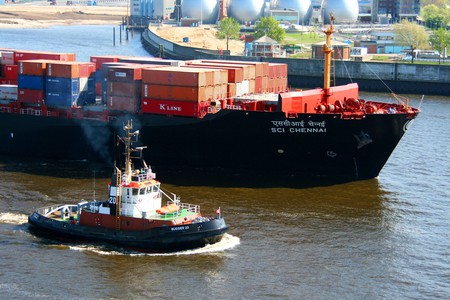 A container ship being guided out of the Hamburg port | © Pixabay

Hamburg is protected by a patron goddess

Once upon a time Hamburg was looked over by the Virgin Mary. But as the Protestant Reformation swept over Germany in the 16th century, the city needed a new patroness. Enter Hammonia: the beautiful female personification of Hamburg and its Hanseatic values of freedom and harmony, peace and welfare, prosperity and trade. Look closely and you’ll discover Hammonia all across the city. Her image decorates the entrance portal of the City Hall and the Brooks bridge. Her name is carried by ships, buildings, and local sports teams.

It has the most bridges of any city in the world

When picturing a city with many bridges, most think of the charming islands of Venice or the lovely canals of Amsterdam. But, in fact, it is Hamburg that has more bridges than any other city in the world – though no one knows how many exactly, sources state between 2,300 and 2,500. Among these are road, rail, and footbridges, bridges stretching across rivers, canals, and roads. Some of the most picturesque bridges can be found in the Speicherstadt warehouse district and along the Lake Alster and the nearby canals. 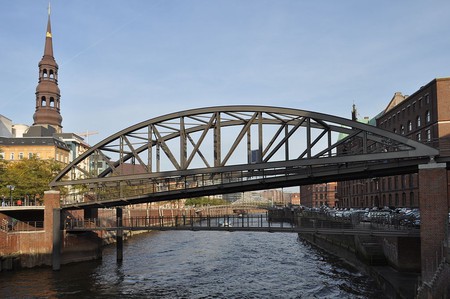 The Lake Alster swans have a father

The beautiful Lake Alster in the heart of Hamburg is known for its game of over 100 swans. These birds are looked after by the Schwanenvater – literally, “the swan father.” This gamekeeper position has existed since the 17th century and is among the oldest government agency posts in the world. One of his main tasks is escorting the swans from their summer quarters on the Lake Alster to their winter quarters in the smaller Eppendorfer Mühlenteich that is protected from freezing over. For over three centuries the return of the swans to the Alster marks the beginning of spring in Hamburg.

In 1907, Carl Hagenbeck Jr., the son of a fishmonger-turned-animal collector, founded the Tierpark Hagenbeck. At the time it was unlike any zoo in the world for there was not a single cage in sight. The animals were kept in open enclosures surrounded by moats, providing them with a more natural environment where they could move freely. Today this design is preferred by zoos all across the world. The Tierpark Hagenbeck remains the only large, privately-owned zoo in Europe and is currently under the management of the 6th generation of Hagenbecks. 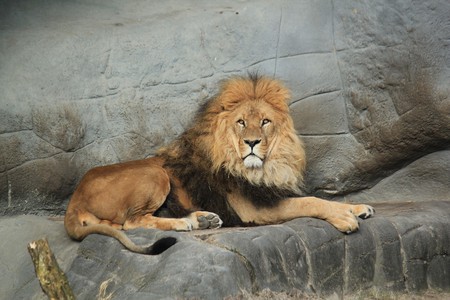 Lion at the Tierpark Hagenbeck | © Pixabay

There’s a street closed for women… unless they’re prostitutes

The Herbertstraße in the St. Pauli district is known for two reasons. First, it’s Hamburg’s shortest street. Second, it’s the city’s most notorious street. The passage, nowadays blocked from sight by barriers on both ends, has been Hamburg’s red light district since the 19th century. While a fairly popular tourism object for men, especially those on stag parties, women are not welcome here and will be immediately chased away by the prostitutes.

The Beatles launched their career in Hamburg

A few streets away from Herbertstraße is the Beatles-Platz, named in honor of the band whose later fame was forged in the clubs around the Reeperbahn. When asked once by a reporter what growing up in Liverpool was like, John Lennon is said to have replied: “I didn’t grow up in Liverpool, I grew up in Hamburg.” The young and inexperienced Beatles played an estimated 273 nights in Hamburg between 1960 and 1962. It was Hamburg where they honed the musical and songwriting skills that allowed them to become the most popular band of its time. 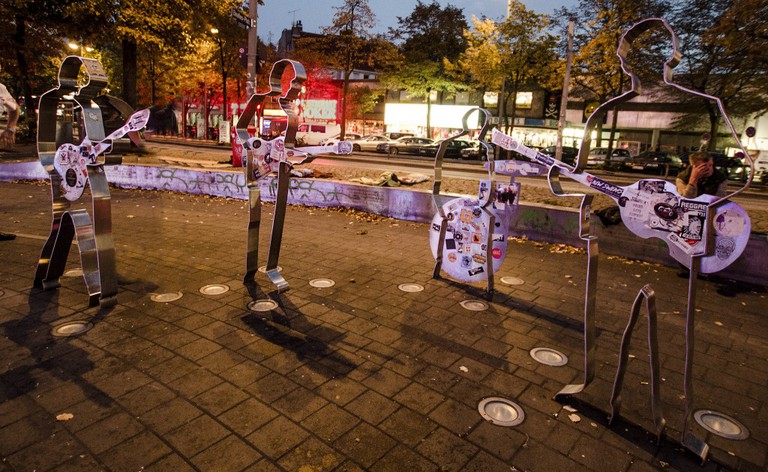 It has more weekly markets than any other European city

Each week in Hamburg more than a million people visit one of more than 100 weekly markets (Wochenmärkte). From food markets to flea markets, no other European city has as many. Also Europe’s largest open air market takes place in Hamburg. It’s the weekly Isemarkt whose 200 merchants build their stands under the steel arches of the city’s oldest metro line. In turn, Hamburg’s most famous market is the Fischmarkt by River Elbe that takes place every Sunday morning and offers everything from fish and fruit to beer and live music.

In the large Planten un Blomen park in the middle of the city hides a unique gem: a typical Japanese garden completed in 1990 by the garden architect Yoshikuni Araki. At its heart is a beautiful tea house built on the shore of a small lake filled with koi fishes. This garden, the largest of its kind in Europe, offers a place of calm and harmony in the middle of the bustling city. It’s a magical place to visit, especially in the spring when the cherry blossoms are in bloom, and in the autumn when the leaves turn red, orange, and yellow. 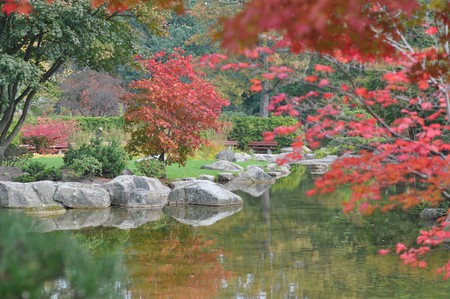 The grand, neo-renaissance Hamburg City Hall was built to represent the wealth and independence of the proud harbor city. Accordingly, everything about this building is monumental. The construction rests on over 4,000 oak piles that support its weight in the muddy ground of the Lake Alster shore. The City Hall’s total area is 17,000 square metres (182,986 square feet), and the tower rises 112 meters (367 feet) high. The elaborate façade is decorated by 20 statues of emperors past. Last but not least, it has 647 rooms, six more than the Buckingham Palace, the London residence of Queen Elizabeth II. 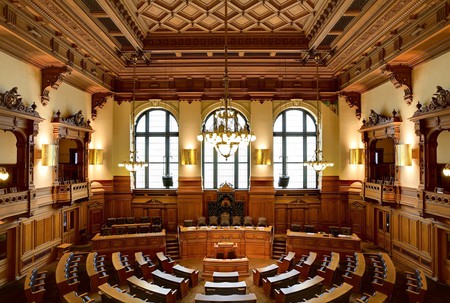 In the year 2000, twin brothers Frederik and Gerrit Braun set out to fulfil their dream: to build the largest miniature railway in the world. A year later they opened Miniatur Wunderland – one of the most unique museums in the world. The 1,490 square metres (16,038 square feet) of the model layout comprise 15,400 metres (50,525 feet) of railway tracks. There are 1,040 trains comprising more than 10,000 wagons, with the longest train stretching 14.51 metres (47.6 feet). The museum is always expanding and, with every new miniature world that is built, they break their own Guinness World Record: that of the world’s largest model railway.

The advent wreath was invented in Hamburg

Next time you’re lighting a candle to count down to Christmas, remember that it’s a tradition that began in Hamburg in the 19th century. As the story goes, in the Christmas season Johann Hinrich Wichern, a theologian and founder of an orphanage, was constantly asked by the orphans when will Christmas finally arrive. He came up with an ingenious answer: he took a carriage wheel and attached as many candles as days until Christmas. The Christmas tradition of advent wreaths, simplified to four candles and decorated with fir leaves, has since spread across the world. 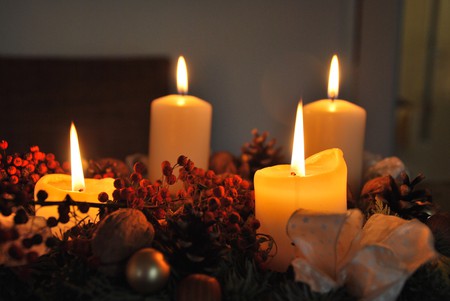 An advent wreath | © Pixabay
Give us feedback