12 Songs You Need To Listen To When In Berlin

A city of culture and music, Berlin has sparked numerous songs from across the decades by local and foreign musicians who have ever loved or lived in Berlin. From electronic, punk and rock, to pop, reggae fusion and folk, our list of songs will help you navigate the streets of Berlin at any time of day or night. 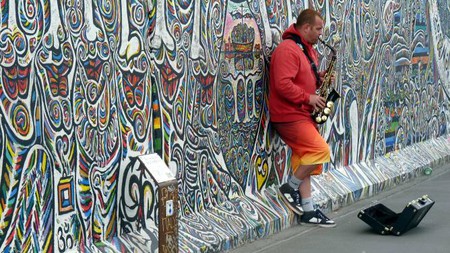 Cleverly sampling the sounds of the Berlin train system, Kalkbrenner created something close to hypnosis with Train, on the soundtrack to his film Berlin Calling.

Reed wrote this in the 1970s as an introduction to his concept album named, yes you guessed it: Berlin.

Part of Bowie’s Berlin Trilogy, he composed this timeless anthem while living in the city in the late 1970s.

A song guaranteed to give you energy to get across town, it’s said Iggy wrote this while traveling on the Berlin S-Bahn.

Cave and the band can be seen playing this song of contained cacophony in Wim Wender’s iconic Himmel Über Berlin.

Accordions, haunting vocals, and macabre joy all make this a very Berlin song.

Sid Vicious and the gang singing about the fall of the wall, kind of, but they definitely don’t lack for energy.

With the video shot during an arctic Berlin winter, this tune will help you get through the colder months.

With lines like ‘Ah you loved me as a loser, but now you’re worried that I just might win’, Cohen’s song perfectly matches Berlin’s grayer landscapes.

Joey Ramone and co ramp it up on this one, as they always do, and the extra kick might be just what you need to make that train connection at four in the morning.

Berlin nights can be long, so here’s a set of appropriate length by German techno musician Ellen Allien.

The 11-strong Berliner band bounce with energy in this song about life and music in their city: ‘When I cruise through Berlin City Reggae is my motor.’