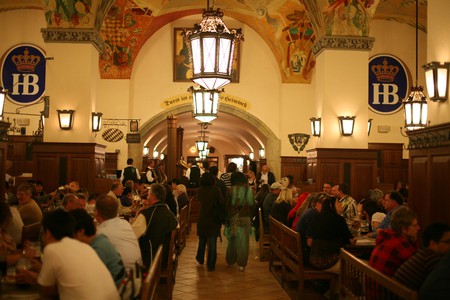 Filling and flavourful, Bavarian cuisine is perfect after a day in the Alps or exploring the city streets of Munich. Best enjoyed alongside a cold beer and a warm fire, these are the best of Munich’s dishes to try when in the city.

Hearty, rich and calorie-dense, the beloved dishes of Bavaria are ideal sustenance after a day spent walking up and down mountains or taking to the slopes to ski or snowboard, and Bavarian cuisine is the most comforting of comfort foods. Unfortunately for vegetarians and vegans, it does focus heavily on meat, though there are some non-meat options. Here are the dishes you can’t miss out on when visiting Munich.

Throw together egg noodles, German cheese and caramelised onions, bake in the oven and top with parsley or chives and you will have Käsespätzle, the ultimate German comfort food. Perfect after a day of exploring or hiking, Käsespätzle is available in many Bavarian restaurants, and one of the best is offered at Rumpler, where you can wash it down with Augustiner’s version of the standard Bavarian beer, Helles (pronounce both e’s when ordering).

The word Knödel means dumplings, but these are not like the Chinese or Japanese dumplings you may be used to. Bavaria’s most common type of Knödel, for example, is made from day-old bread that is soaked in milk and seasoned with onion, parsley and nutmeg, then either boiled or steamed. Chopped bacon is sometimes added to the mixture, and the base is sometimes made of potatoes instead of bread. At Wirtshaus in der Au in Haidhausen, you can find Knödel made with pretzels and served with hollandaise sauce, and at Bratwurstherzl by Viktualienmarkt in the centre of the city, you can try bread or potato Knödel either alone or as a side with baked pork or goulash. Enjoy the unique decor here as well: part of the dining room at this popular restaurant is a 300-year-old brick vault.

Tender pork that’s roasted until it acquires a crispy, salty skin, Schweinshaxe is a Bavarian classic. It is made from a part of the pig known as knuckle or shank, between the knee or elbow and the ankle. Often served with potatoes or Knödel, sauerkraut and a dark-beer gravy on the side, Schweinshaxe is very rich and heavy, but utterly delicious. You can find it easily at Oktoberfest, and at many German restaurants in Munich throughout the year, including Löwenbräukeller or Zum Straubinger.

According to one legend, Weisswurst, or white sausage, was invented at Viktualienmarkt in the heart of Munich. While the veracity of that claim is hard to test, Weisswurst is certainly one of the city’s most well-known dishes. Made from veal and pork, it is meant to be eaten with the skin off, before noon (it’s often part of a Bavarian breakfast), and with a side of sweet mustard, a pretzel and light beer. One of the best places to get Weisswurst is Gaststätte Großmarkthalle, which is near a wholesale market popular with chefs and restaurateurs. But you can find it at many traditional restaurants around the city too, such as Zum Dürnbräu and Augustiner Bräustuben in the centre.

Kaiserschmarrn, which means “emperor’s mess’” is a pancake that’s torn into pieces partway through the cooking process, and traditionally mixed with sugar and raisins or stewed plums. Supposedly, the emperor in question is Franz Joseph I, who ruled the Austro-Hungarian empire in the 19th and early 20th centuries and was a fan of this dish. Though actually an Austrian dessert, Kaiserschmarrn is popular in Bavaria and can be found in the sweet section at many local restaurants, including Kaisergarten where the famous Kaiserschmarrn takes 45 minutes to prepare instead of the standard 20.

Germany has a large Turkish population, and Munich is no exception. Turkish restaurants and cafés are a common sight in Munich. For one of the best sandwiches in Munich, head to the casual Turkish eatery Türkitch, which has three locations in the city. A kebab sandwich comes with fresh veggies and herbs such as mint, plus spicy and creamy homemade sauces. The meat on offer is turkey cooked on a vertical spit. Vegetarians can go for a veggie kebab, a halloumi burger or falafel. Wash it all down with a beer, a Spezi (a mixture of cola and orange soda) or Ayran, a salty Turkish yoghurt drink.

Another meat dish that’s common on Bavarian menus is half a roasted duck. If you prefer the fancier route, order the roast duck at Käfer-Schänke, where it is served in two courses, the first a duck breast with caramelised cabbage, potato dumplings and apple sauce, and the second a pulled duck leg ragout with lettuce, malted bread croutons and jus. For a more straightforward version served with red cabbage and potato dumplings, head to Irmi or Wirtshaus in der Au.

Munich may not come to mind when you think of barbecue ribs, but for half a century, Rusticana has been serving delicious spare ribs cooked on an open charcoal grill that can compete with the world’s finest. Order these ribs, which are smeared in a secret-recipe barbecue sauce, with a side of baked potato topped with creamy sour cream and chives, and corn on the cob with butter. Irmi also serves a great version of ribs, cut from Tyrolean pigs and served with grilled lemon, mustard and French fries.

Schmalznudel means “fat noodle”, and is a cross between a doughnut and a funnel cake. Krapfen are similar to doughnuts without holes and are often filled with some sort of jam, typically apricot. Both of these delightful sweet treats have been served fresh daily at the family-owned Café Frischhut in Munich’s centre, right near Viktualienmarkt, since 1973 (and fittingly, Schmalznudel is the local nickname for the café).