11 Bavarian Phrases You Need to Own Oktoberfest 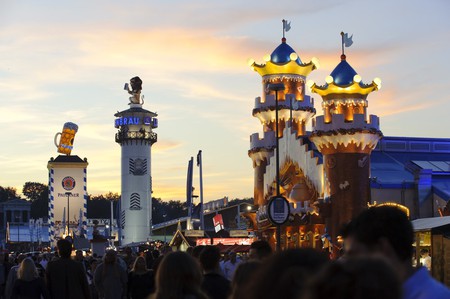 The world’s greatest beer festival is about to kick off. Over the next three weeks, around six million people will descend on the Bavarian capital for larger-fuelled hedonism, lederhosen, dirndl and traditional German cuisine. No matter if it’s your first time at ‘the fest’, or if you’ve revelled in the famous beer halls before, these Bavarian phrases will help you own Oktoberfest.

Before any beer is spilled, Munich’s mayor has the honour of tapping the first barrel. His shout of ‘O’zapft is!‘ meaning ‘It’s tapped!’ is met with loud applause and cheers from the thirsty thousands assembled.

Oktoberfest has an unofficial anthem which will be stuck in your head weeks after the last stein is finished. Ein Prosit der Gemütlichkeit is a toast to good company and ends with ‘Oans, zwoa, g’suffa!‘ or ‘One, two, drink!’, so nursing your stein is not an option.

If you want to tell someone how good they look in their dirndl or lederhosen, the traditional outfits worn during Oktoberfest, then say ‘Bist du a feschs Derndl!‘ to tell a woman she looks pretty and ‘Mei Bua, fesche Wadln host,’ to compliment a man on his calves. 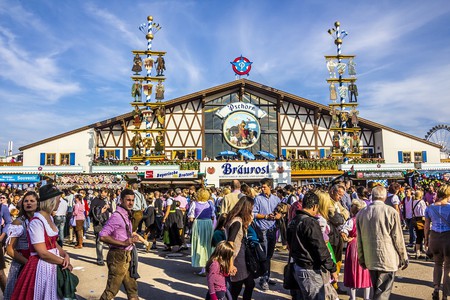 One of the many beer tents at Oktoberfest | © anandoart / Shutterstock

If your compliments lands and the love sparks are flying at Oktoberfest, you can ask ‘Mogst a Busserl?‘ which means ‘Would you like a kiss?’. If the lager has got you feeling feisty, you can shout it at the top of your lungs and see what happens.

‘Griasgood, is da no frei?’

If you don’t get to the beer tents early it’s unlikely you’ll find a table inside. Most people will post up for the entire day, but you can ask ‘Griasgood, is da no frei?‘ in the hope that a friendly Bavarian will offer you and your friends a seat.

If some rowdy Bavarians are ruining your vibe then you can ask them to leave by saying ‘Schleich di!‘. However, the atmosphere around the fest is generally very positive and there are people patrolling the tents to prevent any antisocial behaviour.

After one too many pretzels and a few too many steins you’ll probably be feeling queasy. Shout ‘Ich muss schbei’m!‘ and someone will point you in the direction of the nearest toilet.

While you’re enjoying a Bavarian beer don’t forget to try the snacks. Order a pretzel (Brezn) and a grilled chicken (Hendl) to pair with your stein. Be warned, people don’t use cutlery so be prepared to get your hands dirty. 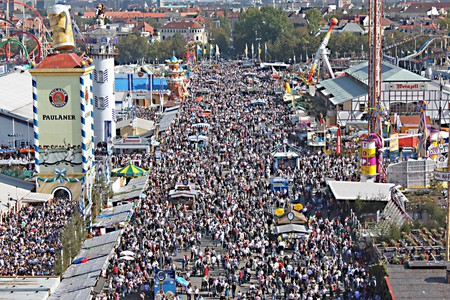 Crowds of people at Oktoberfest on Munich's Theresienwiese | © Intrepix/Shutterstock

This simple phase is used to wish everyone a good meal, and is a great ice breaker when mixing it up with the locals.

Munich is home to some of the most die-hard football fans on the planet. If you really want to show off then learn this song, which fans of Bayern Munich sing to insult their rivals at BVB Dortmund.

One of the great sayings from Oktoberfest translates as ‘It’s better to be drunk and funny, than sober and stupid’. Remember that and you’ll be alright.

This article was created with help from original author Antonia Kuenzel.