10 Spooky Literary Destinations You Must Visit This Halloween

Writers and storytellers have been taking inspiration from creepy locations since time immemorial. To mark the coming of Halloween here’s a run-down of some of the best real-life destinations you can check out that have inspired great novelists and poets down the centuries – from castles in Germany and ancient burial sites in Scotland, to locations in London connected to the occult and ritualistic killings… 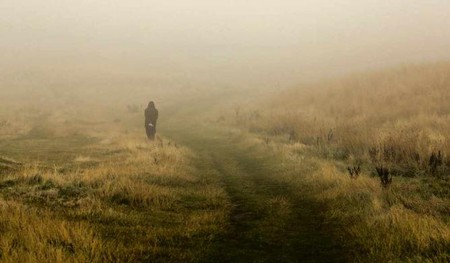 Dartmoor – The Hound of the Baskervilles

The most famous of the Sherlock Holmes stories, The Hound of the Baskervilles is set upon the windswept wastes of Dartmoor in deepest Devonshire. Published in 1902, Arthur Conan Doyle used Gothic narrative techniques like the ancient ancestral pile, mysterious figures that only appear silhouetted against the moon, and a murderer on the loose, escaped from Dartmoor Prison, as well as the titular demonic hound that preys on the Baskervilles family. But it’s the haunting Dartmoor landscape, desolate and menacing, that makes the novel so effective. Is the ubiquitous baying sound the hound or the wind running through the abandoned tin mines of the great Grimpen Mire? Doyle took inspiration from the story of Richard Cabell of Buckfastleigh, a 17th century squire said to have killed his wife and sold his soul to the devil, who, legend says, stalks the moor with his phantom hounds. 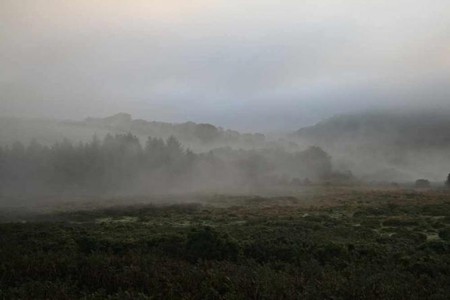 In the Odenwald Mountains not far from the city of Darmstadt in Germany is the original Frankenstein Castle. Surrounded by dense forests and the site of a big Halloween festival every year, the castle was originally built in the 13th century by the Barons of Frankenstein. Since then countless myths and legends have become attached to the castle. The area around the castle is said to have been a center for witchcraft, a favorite for paranormal investigators, and the location where Siegfried is killed in the Nibelungenlied. When Mary Shelley passed through nearby Gersheim in 1814 she took the name for her famous novel, and inspiration from the 18th-century alchemist Johann Conrad Dippel who conducted experiments to raise the dead at the castle. 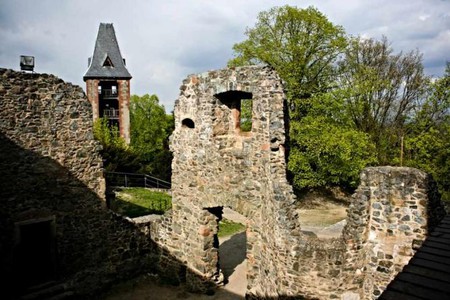 Palais Garnier – Phantom of the Opera

Before the film, before the musical, there was the 1909 novel by Gaston Leroux. His story of the masked phantom Erik, who lives in the labyrinthine corridors and secret passages of the Palais Garnier in Paris, takes advantage of the vastness and strange history of the building. Built in the 1860s in bombastic Second Empire style, the Palais Garnier has its own underground lake, tunnel systems, and myriad corridors and rooms. In the novel the phantom kidnaps a prima donna and tries to murder her lover in the underground lake. Leroux was able to take advantage of stories of executions and prisoners held in the Palais Garnier during the Paris Commune of 1871 and the strange tale of an architect said to have lived in the basements of the Opera House during building and disappeared never to be seen again. 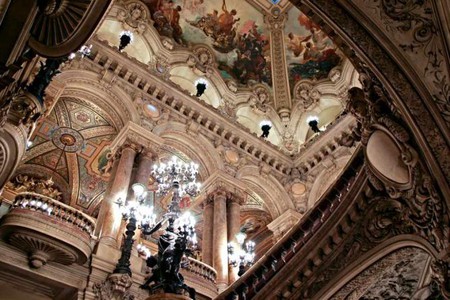 The Old Dutch Church – The Legend of Sleepy Hollow

The village of Sleepy Hollow is rated by some paranormal investigators as the most haunted place in the world. The little village in New York was the setting for Washington Irving’s 1820 tale of Ichabod Crane and his meeting with the Headless Horseman, who pursues him one night past the Old Dutch Burial Ground to his apparent death. The Old Dutch Church, built in 1685 to serve the original Dutch settlers of Sleepy Hollow is still there, along with the burial plots of many of the people Irving used as inspiration for his characters. And somewhere in an unmarked grave in the burial plot is the resting place of a Hessian soldier killed in the Revolutionary Wars and left decapitated who was buried by the van Tassel family – the source of the Headless Horseman of Sleepy Hollow legend. 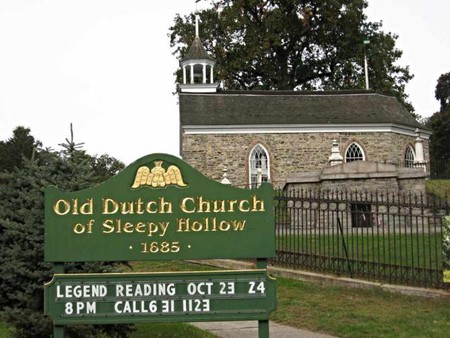 The magnificent Château de Chillon sits on an island in Lake Geneva between Montreux and Villeneuve in Switzerland. Once home to the Counts of Savoy, they used the castle as a prison and execution ground in the 16th century Wars of Religion. One prisoner was François Bonivard, Genevan patriot and opponent of the Savoyards. In 1816 Percy Shelley and Lord Byron came to the Château and explored the crypt and dungeons, the stone bed on which condemned men spent their final night and the fifth of the seven pillars in the crypt to which Bonivard was chained for four years. Byron was inspired to write his poem ‘The Prisoner of Chillon’ about Bonivard and his melancholy plight in the dreary dungeons of Chillon. Unsurprisingly, the Château is said to be home to a few ghosts. 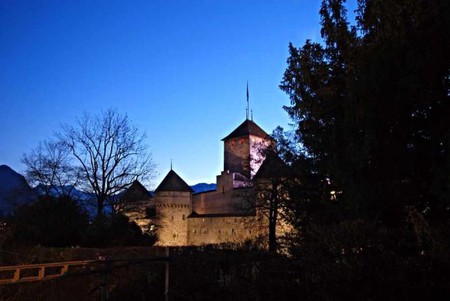 Arthur’s Seat – Private Memoirs and Confessions of a Justified Sinner

Edinburgh is a seriously spooky city. It’s the city of Burke and Hare the body-snatchers, and Deacon Brodie the city councillor who spent his nights burgling his fellow citizens. Amongst the spookiest places is Arthur’s Seat, the great hillock that looms over the city. Here in 1836 a bizarre set of 17 tiny coffins were uncovered, the so-called ‘fairy coffins’. And it’s here that one of the oddest moments in James Hogg’s 1824 novel occurs. Private Memoirs and Confessions of a Justified Sinner is known by critics as one of the most compelling portrayals of evil in English literature. It follows the religious zealot Wringhim and his pursuit of his innocent brother, Colwan. Colwan heads up Arthur’s Seat one morning only to become disorientated in the mists in which he sees an image of his tormentor in outline. And when he steps back, who should he find behind him? 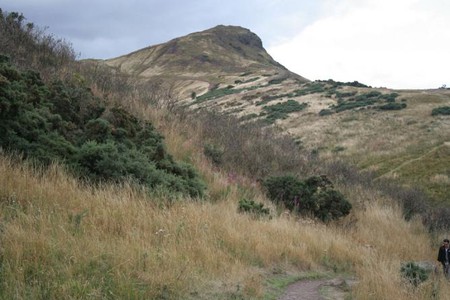 The Aldeburgh Coast – A Warning to the Curious

Palaeographer, Provost of Eton and King’s College, Cambridge, and acknowledged master of the ghost story, Montague Rhodes James was one of the great Renaissance men of the early 20th century. James didn’t need the conventional Gothic stage scenery to give his readers a fright, working instead with eerie, bleak locations where there is always the sense of unseen malevolent forces constantly watching you. His story A Warning to the Curious is the tale of an archaeologist who uncovers an ancient crown said to protect the land from invaders and which was once protected by a now-lost local family. He finds himself hounded by supernatural forces that draw him out along the desolate Suffolk at Aldeburgh, disguised as Seaburgh in the story, where the fog close in off the North Sea and the curious archaeologist is found dead. There’s a brilliant BBC adaptation here. 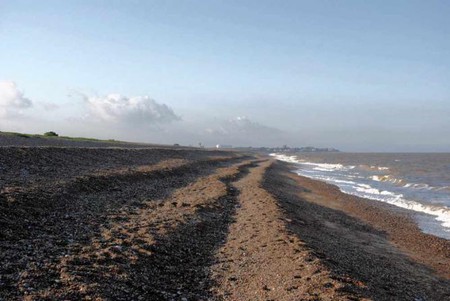 We couldn’t do a spooky locations list without a Dracula reference. Bram Stoker’s 1897 novel takes readers through Romania and London, but the most atmospheric location is the Yorkshire town of Whitby and its magnificent abbey ruins that sit atop the East Cliff. In the novel the Count comes ashore at Whitby in the form of a black dog, climbing the 199 steps to the Abbey ruins after his Russian ship runs aground. Mysteriously the ship’s crew are nowhere to be found and the skipper is found dead at the helm. A native of Dublin, Bram Stoker came to Whitby in 1890 on holiday. You’ll also find St Mary’s Churchyard in the town, where Dracula attacks his first victim in the novel, Lucy Westenra. 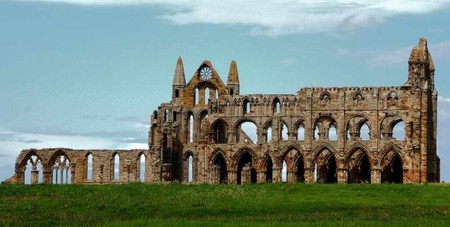 If literature teaches us anything, it’s to stay away from ancient burial plots in the small hours of the night. Robert Louis Stevenson was always attracted to the macabre side of life and death He uses Glencorse Old Kirk in the country south of Edinburgh close to Penicuik as the location of the climax of his most chilling short stories, The Body Snatcher. It tells the tale of Fettes, a medical student in Edinburgh responsible for taking delivery of corpses dug up by body-snatchers for dissection. He becomes aware his body-snatchers are murdering victims for their bodies, and sets out with another student to dig up a fresh corpse. They come upon Glencorse Old Kirk, dig out a recently buried body, and start to head back to Edinburgh in the pitch black only to find a terrifying change comes over the body… 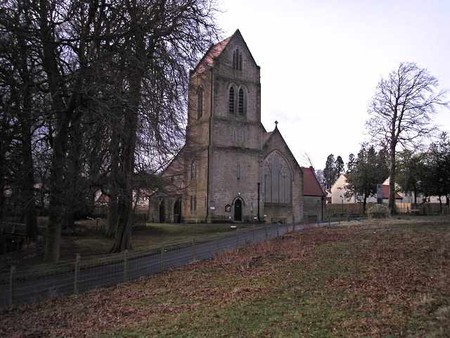 Nicholas Hawksmoor is sometimes known as ‘the devil’s architect’. He was once a student of Christopher Wren and built six London churches following the 1711 Commission to rebuild the city after the Great Fire of 1666. His churches, in areas like Greenwich, Limehouse, Stepney and Bloomsbury, incorporate sinister pagan and masonic symbols like pyramids. And very close to his churches many gruesome events have occurred: the Jack the Ripper murders, the Radcliffe Highway killings, and the bizarre 1974 Cannon Street Road murder. This led Iain Sinclair in his 1974 work Lud Heat to suggest the churches had a sinister influence on the areas surrounding them – a theme taken on by Peter Ackroyd in his classic postmodern novel Hawksmoor that imagines child sacrifices and occult practices being carried out in the foundations of the churches. 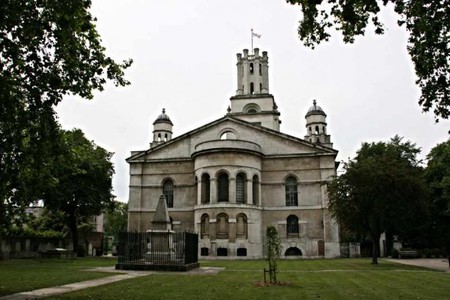