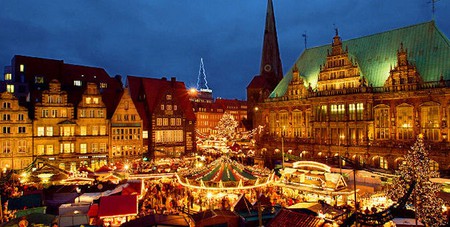 Almost every culture has a slew of festive harmonies and time appropriate carols to share around the holidays. Traditionally, carols tend to be steeped in religion and pertain to the birth of Jesus. That tradition in Germany dates back to Medieval times when folk songs were suffused with lyrics written by clergymen and then sung at church. The songs acted as tributes to God. Fast-forward to 20th-century secularism and a departure from these pious tunes was born. The carols became less about their religious roots and more about celebrating Christmas in more convivial ways that often had nothing to do with the baby in the manger. Regardless of the tone, Christmas songs can be fun to sing and heighten the jovial spirit of the heartwarming holiday.

The oldest known Christmas song from the 11th century.

This Christmas hymn translated from Latin is another oldie but goodie.

This 1816 Falk and Holzschuher Christmas tune means Oh you joyful in English.

This traditional carol sparks some debate as to whether it dates from the 16th or the 19th century. It refers to the walk Mary took to Elizabeth with her child ‘under her heart.’

This song Let us be happy and cheerful is traditionally sung on Nicholas eve.

This cross-cultural classic performed here by the Vienna boys’ choir might sound familiar.