10 German Castles That Are Right out of a Fairy Tale

19th Century Neuschwanstein Castle | © Yury Dmitrienko / Shutterstock
Whether you want to see a picture-perfect 19th-century romantic palace or explore some of the best-preserved mountain fortresses in the world, Germany is the perfect place to visit. Dotted across the country are some of the world’s most eye-catching castles. We’ve picked out the ten that should be top of your list.

Building
Neuschwanstein Castle | Neuschwanstein Castle
The ultimate Disney-like castle is just an hour and 40 minutes from Munich. This 19th-century gem was King Ludwig II’s hideaway until it was opened to the public after his death in 1886. Over 1.4 million people now visit the tourist hot spot each year to take pictures, explore the castle, and admire the view. Make sure to buy the entrance ticket before tackling the mountain walk up to the castle, or complete the Cinderella experience by taking a horse-drawn carriage right to the front door.
More Info
Open In Google Maps
20 Neuschwansteinstraße, Schwangau, 87645, Germany
+498362930830
View menu
Visit website
Visit Facebook page
Send an Email
Give us feedback

This 900-year-old building was the first German castle to become a UNESCO World Heritage site. Over the years, each of Wartburg’s owners have made additions that reflected their contemporary architectural styles, so visitors can see a different fairy tale depending on the direction they approach the castle. Wartburg is known for being Martin Luther’s hideout while translating the bible into German. But how to reach this 400-meter-high (.25-mile) fortress? A family-run donkey station offers four-legged rides to the top. 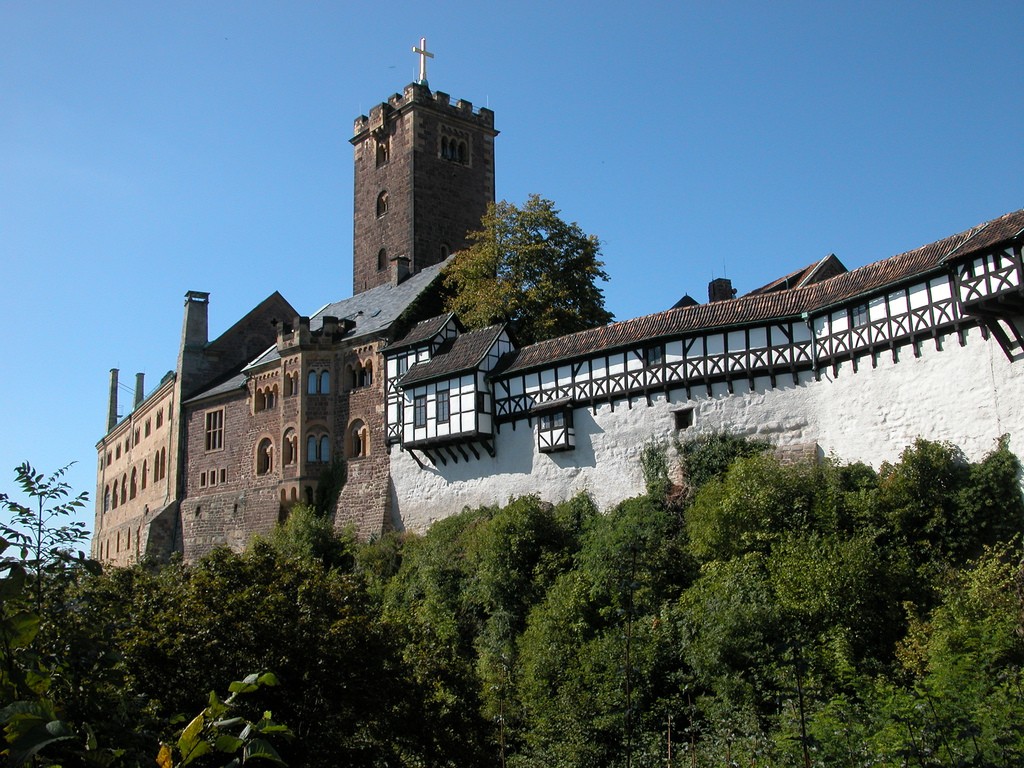 This Hogwarts lookalike is the former ancestral seat of Prussian royalty. Set 234 meters (768 feet) above a valley on top of Berg Hohenzollern, this sprawling fortress is only 50 kilometers (31 miles) south of Stuttgart. Over ten centuries, it’s hosted some serious celebrities that have left their mark; find some of Fredrick the Great’s belongings in the museum, as well as a letter from George Washington thanking one of the castle’s former owners for their service in the American Revolutionary War. Over 300,000 tourists visit Hohenzollern each year, and it hosts open air cinema and Shakespeare productions to keep its visitors entertained. 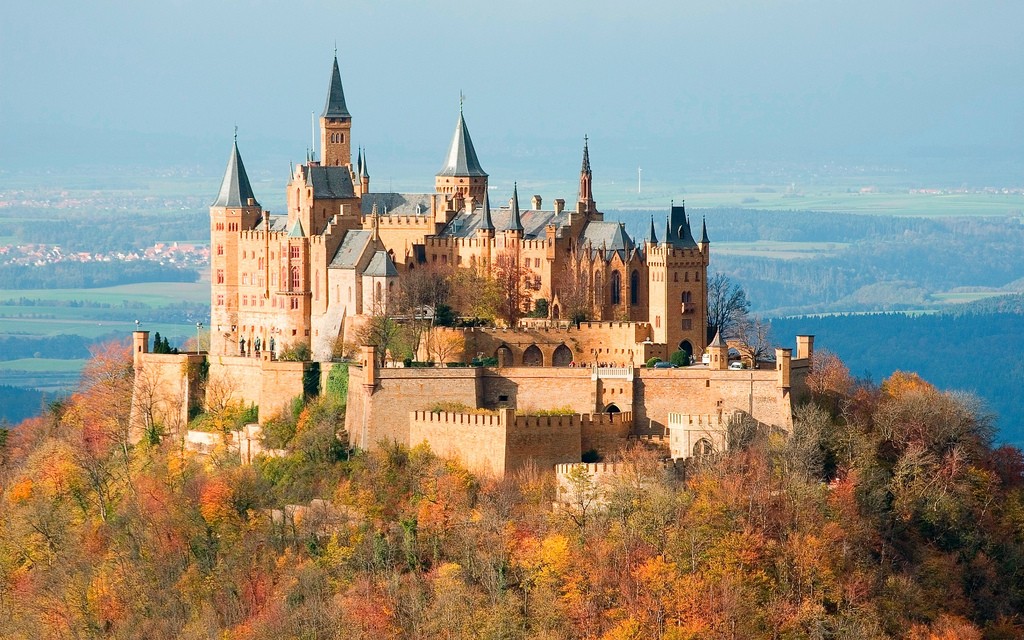 Nestled in the bend of the river a few hours west of Frankfurt, towards Luxembourg, is Reichsburg Cochem. Despite Louis XIV’s troops doing their best to destroy it in 1689, this castle’s exterior, including a beautiful mosaic on one of the outside walls, remains well preserved. On Friday and Saturday evenings, Reichsburg goes out of its way to recreate a medieval fairy tale in the form of a Knight’s Meal: guests tuck into traditional food while being entertained by minstrels and maids. Couples can even get married here for a truly royal experience. 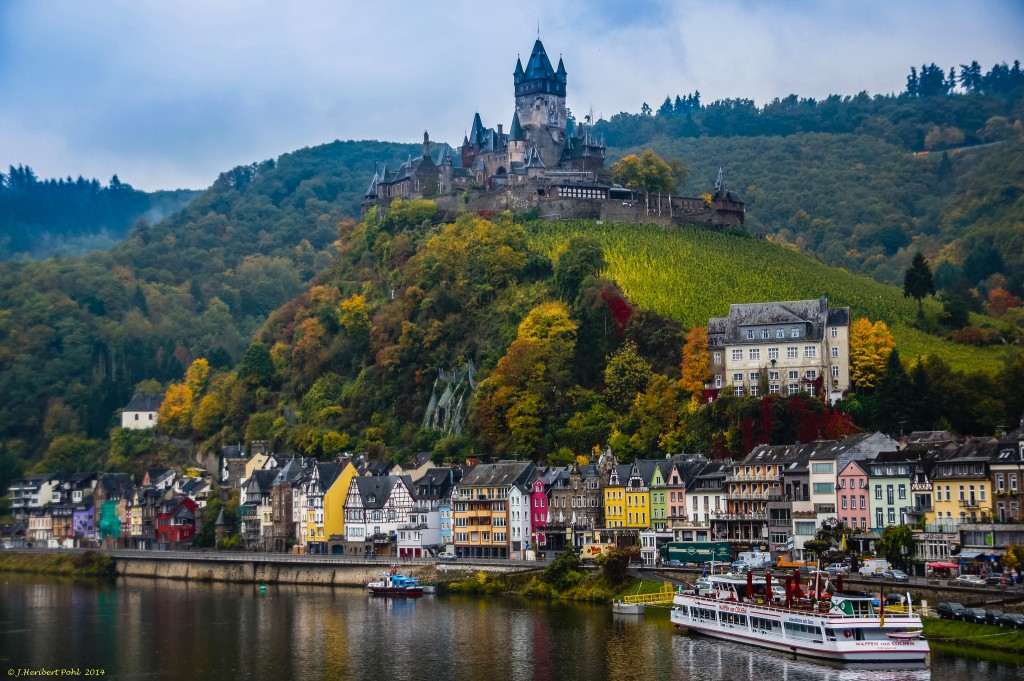 Memorial, Park, Building
Nymphenburg Palace, Munich  | Nymphenburg Palace, Munich
Book Now
Nymphenburg Palace was built to celebrate the birth of the Bavarian heir Max Emanuel to the throne. With its beautiful gardens and grand rooms, it soon became a favorite of Bavarian rulers, several of whom were born or died here. Not as many rooms of the palace are open to tourists as might be expected; after seeing everything inside, get some fresh air in the extensive formal gardens. There’s even a dedicated app that uses augmented reality to help visitors learn more about what they’re looking at.
More Info
Open In Google Maps
1 Schloß Nymphenburg, Neuhausen-Nymphenburg München, Bayern, 80638, Germany
+4989179080
View menu
Visit website
Visit Facebook page
Send an Email
Give us feedback

Eltz is one seriously stylish castle. Complete with striking red woodwork on its turrets, it’s hard to miss nestled among the Wierschem woodlands. What makes this castle particularly special is that it’s a home—it’s still owned by the Kempenich family, who have been there since the 12th century. The interiors are particularly well preserved with many of the original furnishings. Pay close attention to the Knights’ Hall: it’s full of symbols such as a jester’s heads, representing freedom of speech, and the “rose of silence,” representing confidentiality. 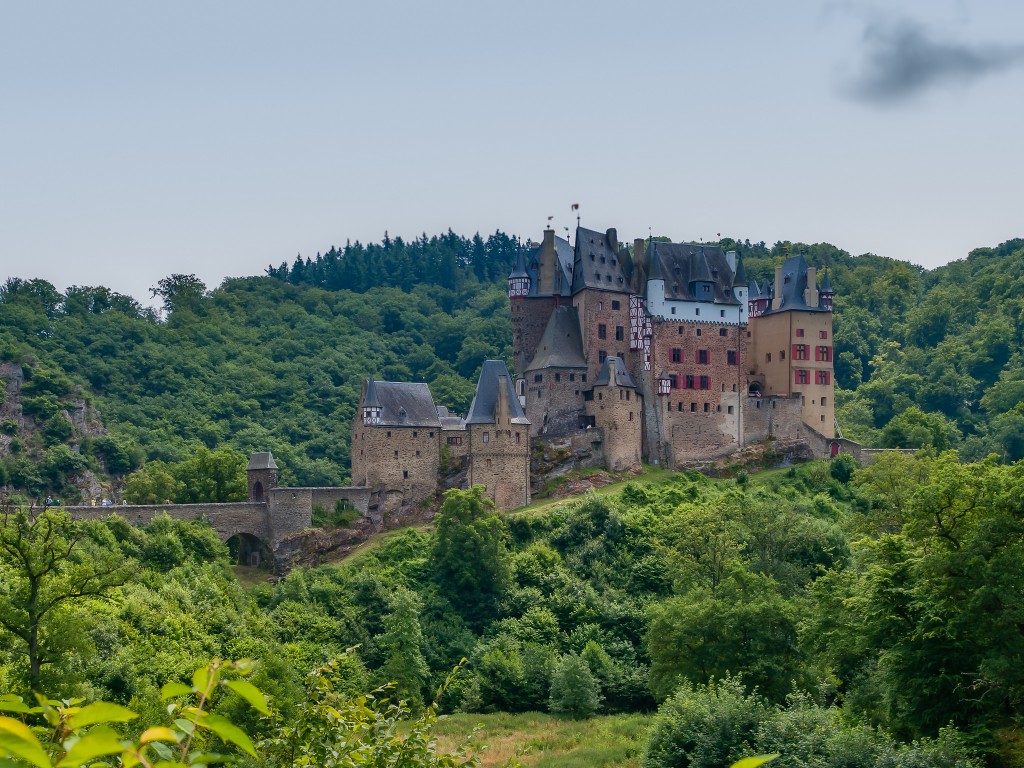 Linderhof is a pint-sized palace with beautiful formal gardens. One of the three castles commissioned by Ludwig II, it started as a royal hunting lodge before it was extended, spruced up, and even moved 200 meters (656 feet) down the road to create more space for the gardens. It reflects Ludwig II’s admiration for the “Sun King,” Louis XIV, and even has a Venus Grotto with royal a seat built into the gardens. Linderhof is near the Austrian border in Ettal, not too far from Lake Constance. 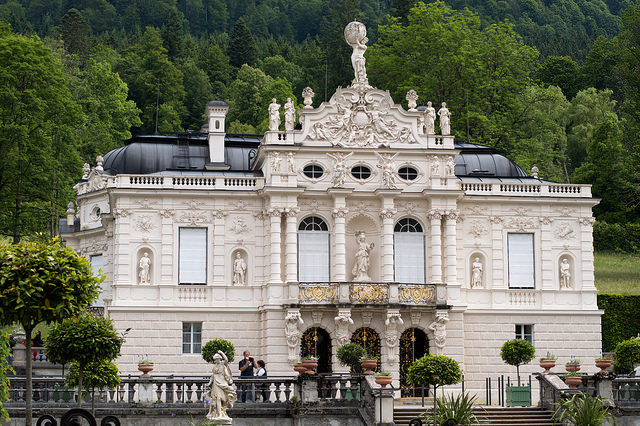 With its white walls, Marksburg looks particularly smart. In fact, it looks remarkable for its age—built in the 1200s, it’s the only medieval castle still standing in the Middle Rhine. Open almost every day, it’s now the headquarters of the German Castles Association, though it was also used as a prison in the past. Visitors will need to be part of a guided tour that takes place in English, French, Italian, and Spanish to take a look around. After walking the ramparts, refuel at the Marksburg Schenke restaurant which has panoramic views over the valley. 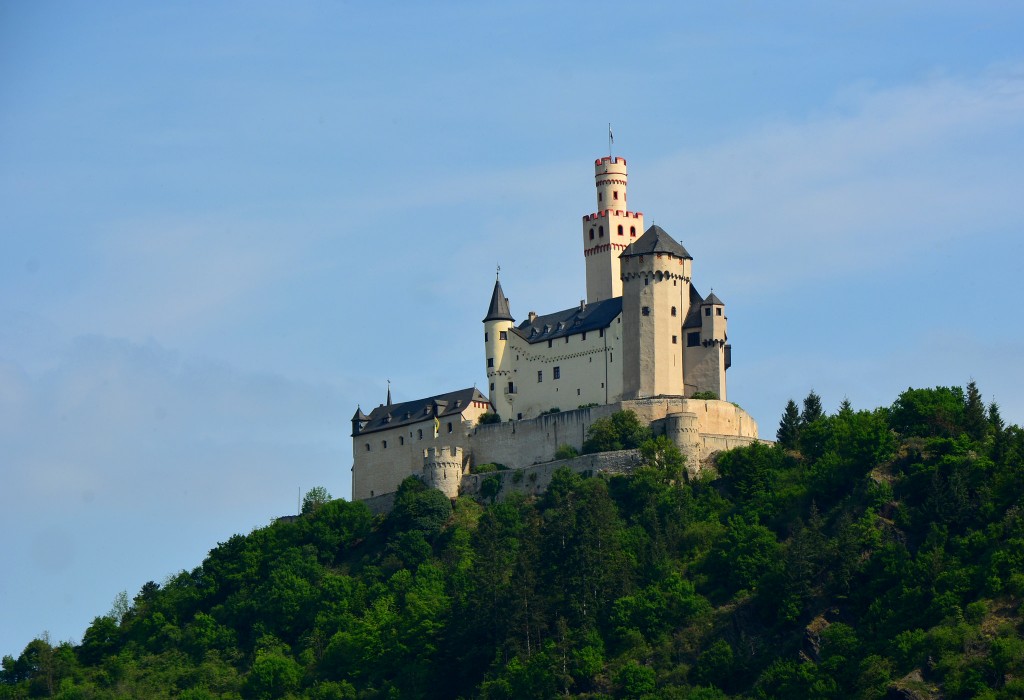 This mini-castle in Wurmttenberg isn’t perched—it leans off the side of a steep rock 817 meters (half a mile) above sea level. Although there have been several castles on this site over the years, this one was built in 1840 and was inspired by Wilhelm Hauff’s novel Lichtenstein. Lichtenstein Castle is a great bet for those looking to escape the crowds; despite being only an hour from Stuttgart, most tourists don’t make the trip. Its exposed position does mean it’s closed throughout the winter, though, so make sure to check it’s open before setting off.

This seriously luxurious castle has earned the nickname “Versailles of the North”—it’s even on its own island. An hour and half east of Hamburg, it’s part of a well-organized museum complex. Though there’s been a castle on this site since the 10th century, this is a mid-19th-century creation with a matching romantic style, including an ornate throne room. It’s been open to the public as a museum since 1921, except for several decades after World War II when it was used as a kindergarten teacher training school. 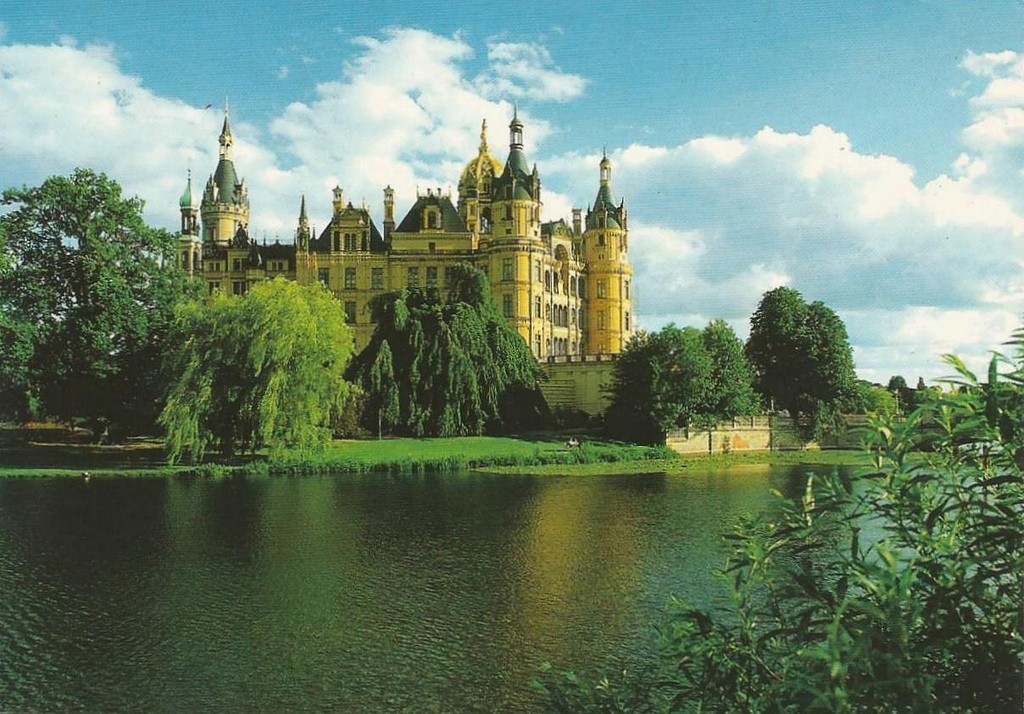